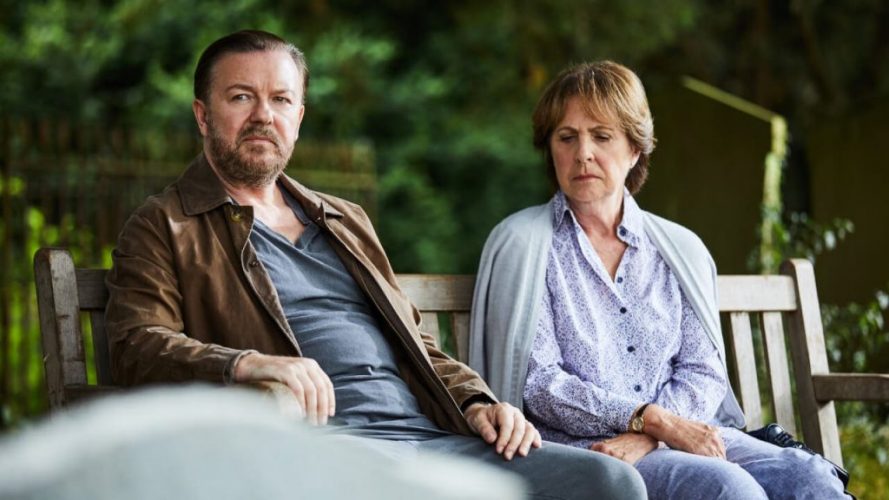 In its second episode, ‘After Life’ continues to build upon the arcs of other characters. This adds a refreshing touch to the show, which would have otherwise fallen into the same cycle that we had already witnessed in the first season. Tony tries to become more involved with the people around him, and it opens the doors to more conversations about love, life, and pain. He continues to live with the memories of his wife but is making efforts to get better. There is still a long way to go there, but hopefully, the journey wouldn’t be tiring.

The episode starts and finishes like Tony’s day- with the videos of Lisa. In between this, Tony plays cupid for Postman Pat. He also apologizes to Matt about what happened at the yoga class, though he does not take the blame of ruining anything, it still falls on the “snot-curdling” instructor who was irritating beyond belief. The topic of his drinking habits is raised, but Tony explains it away before Kath interrupts them.

As a favor to Lenny, Matt allows his girlfriend’s son, James, to work at the Gazette. He tells them about the am-dram group that he is a part of, The Tambury Players’. Brian expresses his wish to join them, considering that he is a man of many talents. Sandy wonders if she can check out the group and see if there is a story there. They meet Ken, the leader of the group, who wants his life story and weird experiences to be featured in the paper.

Tony’s path crosses with Rebecca, the widow with whom he had been on a date. On a visit to his father, he sees Emma chatting with Simon, which brings up the topic of him working on his pain. A story from Anne makes Tony realize that he is not really as bad he thinks of himself. He also discovers that he is a terrible cook.

While Tony and Lisa’s love story is the gold standard, the show also takes the time to allow other potential love stories to blossom. This episode starts with an unlikely but interesting one to look forward to. It turns out that Postman Pat, who took a bath at Tony’s house in the last episode to make himself presentable for a flat he wanted to get a share of, is interested in Daphne, aka Roxy. As asked, Tony downplays whatever characteristics Pat has and gets him a date with her.

The episode also acknowledges the alcoholism of Tony. Matt tries to talk to him about it; he suggests going to AA. But Tony doesn’t see why he would want to do that because alcohol is not his problem. By becoming sober, everything won’t suddenly fall into place in his life. This further leads to a conversation with Kath, where she mentions that she loves to believe in paranormal stuff rather than the facts suggested by science, for example, evolution.

The fans of Ricky Gervais know that the arguments between God and science have often been touched upon in his stand-ups. We expect more of this in his next Netflix stand-up. Some scenes in the previous season, too, had led to a discussion between Tony and Kath on a similar premise. This time, however, he subtly lets it go without rewinding into the familiar rant of how possibly she cannot believe in evolution. He allows her to have the comfort of her paranormal beliefs and angels who smell like a cinnamon bun! He can’t help the sarcasm, but he tones it down. Perhaps, Tony is getting better after all.

He pays another visit to Anne in the cemetery. Had it been any other show, I would have suspected her of being a ghost. We always see her in the cemetery, and no one but Tony has ever met her. Also, she never really talks about herself. She just listens to Tony and advises him, this time with the story of The Frog and The Scorpion. But Gervais wouldn’t infringe on his beliefs for the sake of testing his character’s sanity. He wouldn’t want to encourage people like Kath, would he?