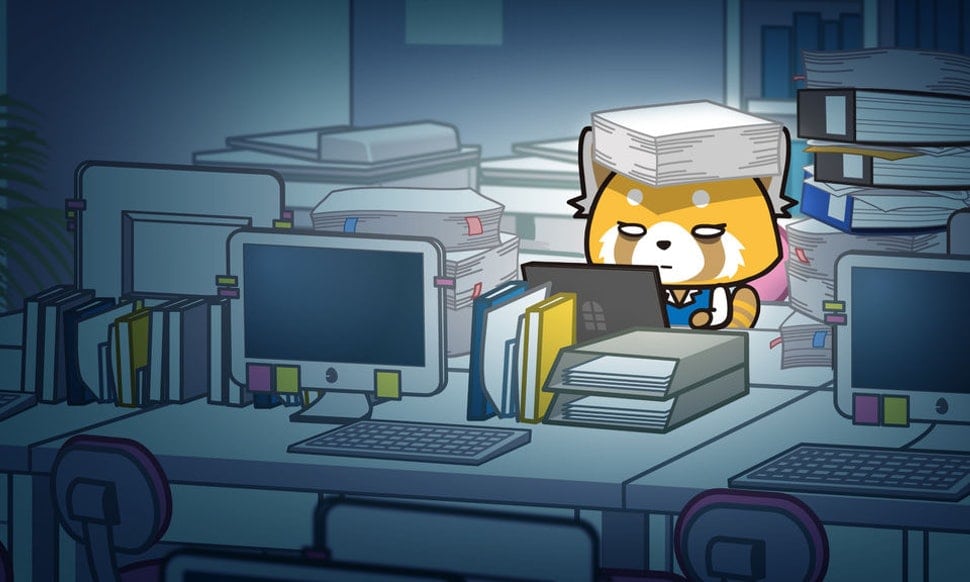 Aggressive Retsuko or Aggretsuko (also known as Aguresshibu Retsuko in Japanese) is a comedy anime television series which is based on an eponymous character of the Japanese mascot company Sanrio. In 2015, an anime studio called Fanworks decided to create an anime television series based on the character, and subsequently, a 100-episode season was aired on TBS in Japan between April 2, 2016 and March 31, 2018.

The first season of the show recieved immense critical acclaim. Aggressive Retsuko season 1 currently holds a 100% on Rotten Tomatoes based on 22 reviews. That’s rare for an anime series. The website’s critic consensus reads, “Uniquely bleak for a Sanrio property, Aggretsuko balances biting corporate satire with adorable characters and absurdist comedy to create a surprising, insightful addition to the world of animation”. Indiewire had this to say about the show: “And that is the crux of “Aggretsuko’s” problem. As it stands, this delightful season is more like filling up on Costco samples than a more substantial series binge. That’s no doubt part of its charm.”

With the anime television series being deemed a success, Netflix announced an original net animation (ONA) series based on the character, and Season 1 of the ONA series premiered on Netflix on April 20, 2018. A year later in June, 2019, Aggretsuko season 2 was released. After two successful seasons, fans are eagerly waiting for the next. Here’s everything you need to know about it.

Aggretsuko Season 3 Release Date: When will it premiere?

Aggretsuko Season 2 premiered on June 14, 2019, and in typical Netflix fashion, all 10 episodes were released together. As far as the next season goes, according to a trusted source, Aggretsuko Season 3 has already been given an all-clear green flag. Now our best guess is that Aggretsuko Season 3 could premiere sometime in June, 2020. As soon as we learn more, we will update this section.

For those who like watching anime shows in English, the good news is that Aggretsuko has a great English dub which was made keeping the show’s international fanbase in mind. If you want to watch the show in English, you can find dubbed episodes of the ONA on Netflix.

On the face of it, Aggretsuko has a seemingly simple plot. It follows a 25-year-old anthropomorphic red panda called Retsuko who works in the accounting department of a Japanese trading firm. Single and facing constant annoyance at work by her pushy superiors and co-workers, Retsuko has a rather unique way of venting – she goes to a karaoke bar every night, guzzles beer, and lets her emotions out by singing death metal. Retsuko also has a support network in the form of Washimi and Gori, two older women who are senior executives at the company she works for. Throughout the show, Washimi and Gori advice Retsuko to not show any weakness if she wants to climb the corporate ladder. However, Retsuko is neither Washimi nor Gori, and cannot do so. Instead, she chooses death metal to cope.

Although the plot appears to be simple, it’s actually an insightful and rather jarring commentary on the plight of women who work in corporate firms in Asia. While gender inequality at the workplace is hardly a thing unique to Asia, women working as corporate executives in Asia have to face the additional pressures of adhering to societal expectations. Further, the show faithfully captures what many corporate workplaces in Asia look like – be it the sexism at the workplace or be it sexist “jokes” during mandatory after-work drinks. Retsuko, like her female colleagues, has to face the brunt of this sexism, especially owing to the fact that she is a junior employee. Retsuko is constantly buggered by her boss to bring him tea and pour him beer because these jobs are supposedly women’s jobs, and despite her frustration, she cannot take it out on her boss because her job depends on pleasing her superiors at office, who are mostly male. So, the only thing Retsuko can do to vent without jeopardizing her career is vent somewhere else. And, she chooses a karaoke bar and death metal as her outlets.

Interestingly, the creator of Aggretsuko, who goes by the pen name Yeti, said that capturing feminine rage in a corporate was the purpose behind creating Retsuko. Speaking to BBC in 2017, Yeti had said, “Japan’s working environment often becomes an issue and I think there are many people who are enduring a lot of stress…I observed office workers who are at the centre of Japan’s corporate culture and I could hear their heartfelt screams.” Does the show succeed in doing so? Absolutely, if you ask us.

There are several characters in Aggretsuko and quite a few of them are important to the plot of the show. Below, we’ve provided you with brief backgrounds on each of these important characters.

Retsuko: The main protagonist of the show, Retsuko is a 25-year-old red panda who works in the accounting department of a corporate firm. Always on the receiving end of sexism by her male co-workers and superiors, Retsuko has a hard time at work, especially because she is an introvert who cannot stand up for herself. Thus, to let out her emotions, she heads to a karaoke bar after work, drinks plenty of beer, and growls out death metal songs with lyrics depicting her struggles at work.

Gori: The director of marketing at the company Retsuko works for, Gori is an excitable gorilla. Despite being serious at the workplace, Gori is extremely excitable and takes great pleasure in getting to know Retsuko better and advising her on how to survive in office. Gori also serves as a comic relief in the show, and goes into extreme mourning whenever one of her relationships fail.

Fenneko: Retsuko’s best friend at work, Fenneko is a fennec fox. She is extremely observant and perceptive and can deduce anyone’s mental state through observation and deduction.

Director Ton: The director of the accounting department and Retsuko’s boss, Ton is a pig who spends most of his time playing golf. He is a constant source of annoyance for Retsuko and always burdens her with excess work and gets on her nerves through his blatant sexism.