Where Are Alaska and Sharon from RuPaul’s Drag Race Now? 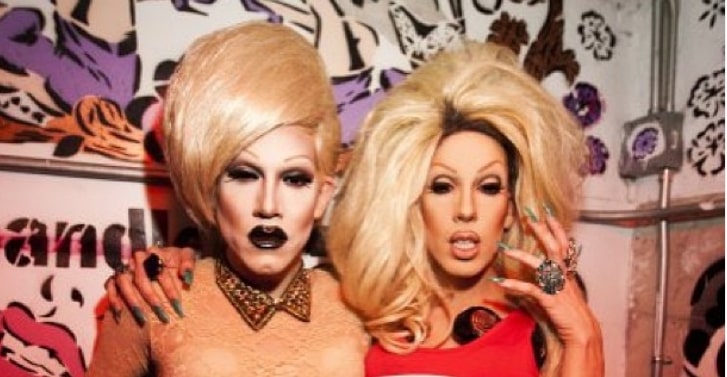 The hit American reality competition series ‘RuPaul’s Drag Race’ has given us some of the most beloved and inspiring drag queens of all time! Having debuted in 2009, it has spanned 12 seasons annually in the search for ‘America’s Next Drag Superstar’. The competition comprises various tasks and challenges that help filter out contestants worthy of the title. The show has inevitably produced quite a few love stories. Such is the case with Alaska and Sharon, who were declared as ‘The Royal Couple’ by drag stars. But not many know that their love story goes way back.

Sharon belonged to Iowa but moved to Pennsylvania in her early twenties to become a professional drag performer. Alaska, who belonged to Pennsylvania as well, was in Los Angeles for the time being. She was trying to pursue a career as an actor. But, her failed auditions and multiple rejections sent her back home, broken-hearted. Sharon and Alaska then came across each other online. They started communicating via Myspace and soon met in person. They started dating and fell in love. Shortly after, they moved in with each other and started living together.

The couple then got together with another drag performer and friend and formed a punk-rock band. The band later transformed into a drag troupe called ‘Haus of Haunt’, which was based out of a local bar. Their band helped introduce fellow drag queens and joined forces with them.

The couple faced a bit of tension when Sharon got shortlisted for the fourth season of the show. This is because Alaska was a big fan and had been auditioning from season one, but she never got selected. Seeing Sharon make her way in easily and also winning the season made Alaska green with envy. She later realized the absurdity of it and supported her partner. She became Sharon’s biggest fan and cheerleader. Alaska was apparently present at the set all the time, and Sharon had often addressed her directly on screen. This made their relationship very public and famous.

Alaska was then selected for the fifth season, but she only ended up as a runner-up. Because she had become a fan-favorite, she was also cast for the second season of ‘RuPaul’s Drag Race All Stars’, which she ultimately won!

Where are Alaska and Sharon Now?

Unfortunately, the couple parted ways by the end of 2013. The couple was in a serious relationship for four years. But, their equation turned sour during the fifth season of the show in which Alaska was cast. Fans were heartbroken as the couple had released a joint statement that the breakup was mutual but provided no further explanation.

According to sources, Alaska and Sharon’s drinking problems had started taking a toll on their relationship. Even though both of them had tried to sober up and clean up their act many times, they ended up getting into heated arguments that escalated to physical violence. It is also said that Alaska might have cheated on Sharon.

Although many believe that the duo parted on bad terms, the two are actually best friends now. They did admit that working in the same circle post their breakup had been a bit awkward, but they quickly adjusted to their new dynamic. They are often seen together in public, joking, laughing, meeting fans, and posing for pictures together.

Both of them have done amazingly well after their appearance on the show. They’re still attached to the show’s franchise and are seen working behind-the-scene or guest-starring in various seasons. They also made their mark in the music industry by releasing a few singles and albums that were very well-received. Both of them also managed to appear in small roles on various other reality shows and web-series. They have featured in a few music videos as well. Whether they’re busy making documentaries or hosting shows, the duo seems to be in a pretty happy place in life.

Sharon is now engaged to an FX artist, Chad O’Connell. They have been in a solid relationship for more than five years. Alaska currently seems to be single and sent her wishes to Sharon and Chad on their engagement.

The duo is also seen attending various Regional Pride Festivities together with other drag queens. They’re always busy participating in different types of drag events, competitions, and festivals. They recently featured on Digital Drag Fest. And now, they are all set to prepare for Heels of Hell Tour that will take place in October. It is a Halloween-based tour that goes around the country featuring the best drag queens and their performances.