All of Us Are Dead Ending, Explained: Is Lee Cheong-san Dead? 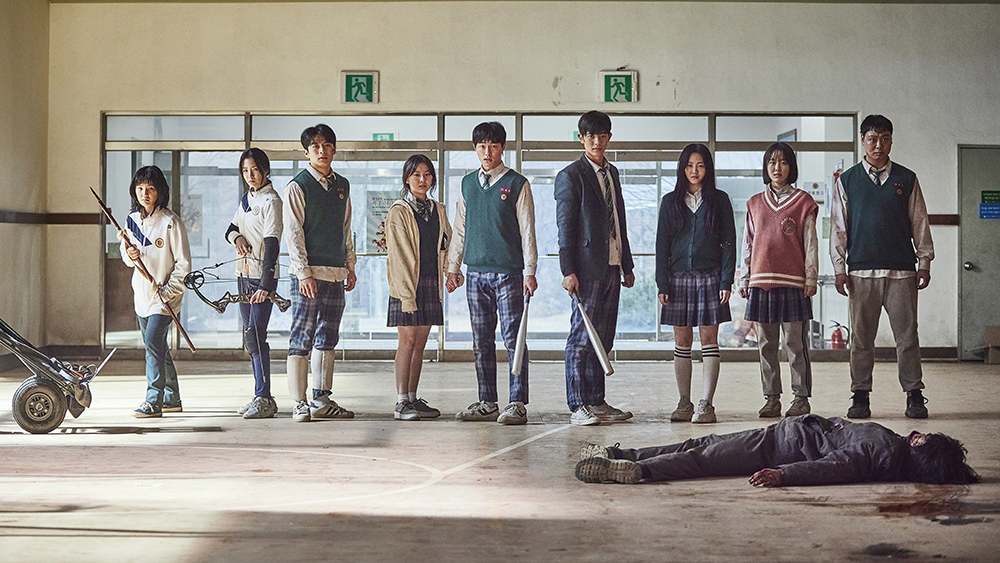 Teen drama blends with zombie apocalypse in Netflix’s South Korean offering ‘All of Us Are Dead.’ The 12-part first season is based on a Naver webtoon by Joo Dong-geun. The story is predominantly set in a city called Hyosan. Lee Byeong-chan (Byeong-cheol Kim), a science teacher at Hyosan High School, learns that his son has suffered brutal bullying at the hands of his peers. Wanting to help him, Byeong-Chan develops a virus that he believes can give its host extraordinary abilities. That doesn’t really happen, and the son begins to transform into a zombie. Kim Hyeon-ju, one of his tormenters, gets bitten by a hamster infected with the virus, and it soon starts to spread throughout the school and beyond. Here is everything you need to know about the ending of ‘All of Us Are Dead’ season 1. SPOILERS AHEAD.

All of Us Are Dead Season 1 Recap

Throughout its inaugural season, ‘All of Us Are Dead’ deftly balances the serious and somber elements of its narrative with zombies and everything they entail. The presence of an ensemble cast helps the show in both regards. On the one hand, it allows the creators to explore various issues plaguing Gen-Z. On the other hand, these same characters die indiscriminately as the dead rise around them.

Nam On-jo (Ji-hu Park) and Lee Cheong-san (Chan-Young Yoon) are childhood friends. They constantly bicker, only to reconcile soon after. On-jo has feelings for Lee Su-hyeok (Park Solomon), the former bad boy of the school and Cheong-san’s close friend. However, Su-hyeok is interested in Choi Nam-ra (Yi-Hyun Cho), the beautiful but reclusive class president. Meanwhile, Cheong-san has been in love with On-jo since they were both children. The cast of characters also includes Han Gyeong-su, one of Cheong-san’s close friends; Yoon I-sak, On-ji’s best friend; Oh Joon-young, the second-best performing student in the class after Nam-ra; Yang Dae-su; Lee Na-yeon, and Jang Woo-jin.

Meanwhile, Woo-jin’s sister, Jang Ha-ri, is a member of the archery team. Yoon Gwi-nam is part of the group that goes around bullying other students. Min Eun-ji and Kim Cheol-soo are their frequent victims. Park Mi-jin is a rebellious senior. Park Sun-hwa is apparently the homeroom teacher of On-jo and Cheong-san’s class.

After realizing that the infected hamster has bitten Hyeon-ju, Byeong-chan keeps her bound and gagged in the science lab. However, she breaks free and ends up biting the school nurse. As Hyeon-ju is taken to the hospital, the nurse turns and starts biting people. Soon, the entire school descends into chaos as infected students and staff go around eating and infecting others. At the hospital, Hyeon-ju spreads the virus.

At first, the students understandably have difficulty accepting what is happening to them. A reference to ‘Train to Busan’ is made to enunciate that these creatures are indeed zombies. Lee Byeong-chan is arrested and subsequently interrogated by Song Jae-il, who seems to have been involved in the investigation after Byeong-chan’s son goes missing. On-jo, Cheong-san, and other survivors from their class find temporary refuge. Elsewhere, Nam So-ju, On-jo’s father and a firefighter, discovers what is happening. However, he can’t get to his daughter immediately as the virus spreads across Hyosan, and his duties require him to help those he can. Among the people he helps is Assemblywoman Park.

While trying to get a phone, Cheong-san gets separated from the rest of the group. He records Gwi-nam murdering the school principal. This earns him the other youth’s bitter enmity. While chasing Cheong-san, Gwi-nam gets attacked by zombies. Cheong-san leaves, believing him to be dead. However, Gwi-nam later regains consciousness, and it is revealed that he has transformed into something neither human nor zombie. Dae-su later dubs them halfbies. In the course of the series, we see two other individuals turning into halfbies: Nam-ra and Eun-ji.

Before his death, Byeong-chan tells Jae-il that he was unable to find an antidote for the virus but adds that all his research is in the laptop at the school lab. Later, the military takes over and sends special forces to retrieve the laptop. They encounter On-jo’s group and initially intend to take them back with them. However, Eun-ji, who has made it to safety, attacks Cheol-soo and several soldiers, and the military scientists realize that there are asymptomatic cases among the infected. This prompts the operation commander to order his soldiers to leave the students behind.

The government scientists ultimately also fail to come up with an antidote. As the virus begins to spread beyond Hyosan and can potentially reach Seoul, the commander instructs his soldiers to bomb the zombies. In the season finale, the survivors make a desperate run to safety.

All of Us Are Dead Season 1 Ending: Is Lee Cheong-san Dead?

In the penultimate episode, the survivors find out about the bombing because of Nam-ra’s heightened hearing ability. Gwi-nam appears one last time to try to kill Cheong-san. Although he is beaten back, he manages to bite Lee Cheong-san this time. Realizing that his fate is sealed, Cheong-san says his goodbye to On-jo and his friends and leaves to distract the zombies so that his friends can get leave the building find a safe location before the bomb starts dropping. He lures the ordinary zombies into a deep hole and tricks them into falling there.

Meanwhile, it is revealed that Gwi-nam has survived their last encounter. The two of them fight until the explosion. In the finale scene of the penultimate episode of the season, Cheong-san is shown to be lying among other zombies, covered in ash. In a short distance, On-jo’s nametag is seen. The implication here is that Cheong-san is dead, which is most likely the case. However, Cheong-san has experienced near-death situations throughout the season. In certain episodes, the ending implies that he is dead. However, the following episode reveals it to be not the case. There is a remote chance that the same thing has happened here, and the writers intend to reveal the truth in the next season.