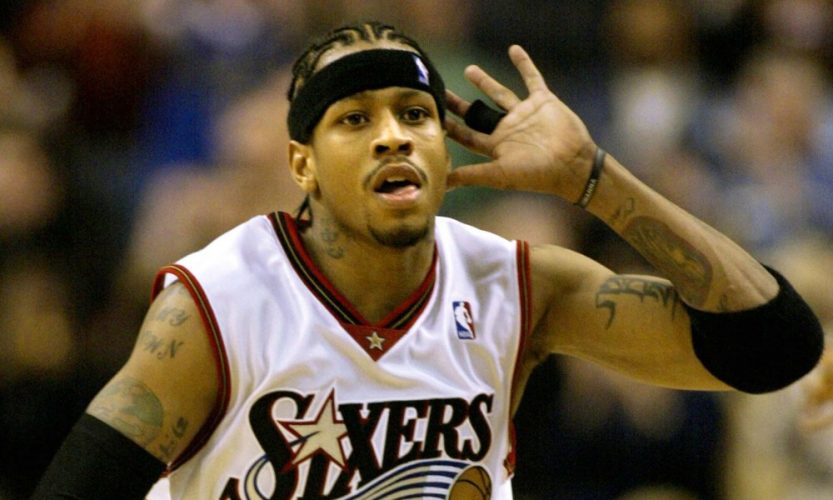 Netflix’s ‘Hustle’ takes focuses on the story of a young basketball player trying to make his way into the NBA. To make it look more realistic, a number of real-life NBA players and other personalities appear in cameos throughout the film. While some of them play substantial parts, others are only present in passing. One of those personalities is Allen Iverson. He is one of the most well-known NBA players. But where has he been since his retirement? Here’s what we know about Allen Iverson.

Where is Allen Iverson Today?

Allen Iverson is a former NBA player who played for the Philadelphia 76ers for eleven seasons. He has also played for the Denver Nuggets, Detroit Pistons, and the Memphis Grizzlies. Considered one of the best, and also one of the most controversial players, Iverson played in Turkey after leaving NBA, and retired a year later. While he moved on to different teams during his career, Iverson has maintained that he will always be a Sixer at heart. His time with the 76ers was one of the best years of his career, and his final NBA game was also played with them. His love for the team has prompted him to speak about his wish to work with the Sixers in some capacity.

“I got Sixer blood pumping through me. Everybody knows that I want to help that organization. I been retired, what, 11 years? I don’t know how I’m not a part of that staff in some kind of way,” he said, while in a conversation with Taylor Rooks. He added that money was not the matter in this situation, and all he wants is to help the team get better.

Allen Iverson was a bit hesitant to talk about it, but here he discusses his desire to be a part of the Sixers organization.
What do you think? Should AI join the coaching staff in some capacity? pic.twitter.com/bYgEZ2kbjG

Despite his love for the game, it is understandable why the Sixers have not yet approached him. In his heyday, Iverson was known to be a difficult figure. He was especially reckless with his money, burning out most of it quickly since his retirement. What really helped him not go broke is the foresight of having signed a crucial deal with Reebok back when he was still in his prime. He had first signed a contract with the company in 1996, and in 2001, to keep Iverson around for a long time, Reebok offered him a deal that proves to be lucrative for him now. The terms of the deal had the company paying Iverson $800,000 annually for the rest of his life. It was also agreed by Reebok to set aside $32 million in a trust fund that would be inherited by Iverson on his 55th birthday. The lifeboat deal for him was brought to light when his ex-wife filed a claim on it to control the half of the trust fund.

Allen Iverson turns 45 today. Ten years from today, on his 55th birthday, he receives a $32 million trust fund as part of the lifetime Reebok deal he signed in 2001. pic.twitter.com/ptbZTOYEsN

In 2021, he partnered up with Viola Brands, a Black-owned multinational cannabis operator. “I’ve had a lot of people approach me with business opportunities, but this one with Al was different,” said Iverson. “After seeing how devoted he is to this business, and him educating me on how beneficial the plant is, it just felt right. I’m excited to be a part of it. Together, we’re about to change the game.” In 2021, they released ’96, the first strain in the Iverson Collection. It’s in the memory of the year that he was drafted into the NBA.

Career choices and financial status aside, Iverson has made peace with the process of getting old. “I’m still like when I was younger, in my 20s,” he said. “Like, I got a birthday coming up, and I get excited about it. … I know so many people that didn’t make it to this age or nowhere near it, so it’s a big deal to me. I love it,” he said. He also tries to spend a lot of time with his children, who, he notes, are also getting older. “A lot of times with them I concentrate on the fact that things that they did in previous years, they’re supposed to be able to do better now or not do them anymore. … So that’s a part of my parenting. As I get older, they’re getting older.” He also mentioned that he has learned a lot from certain experiences in his life and that he has grown from them and moved on.