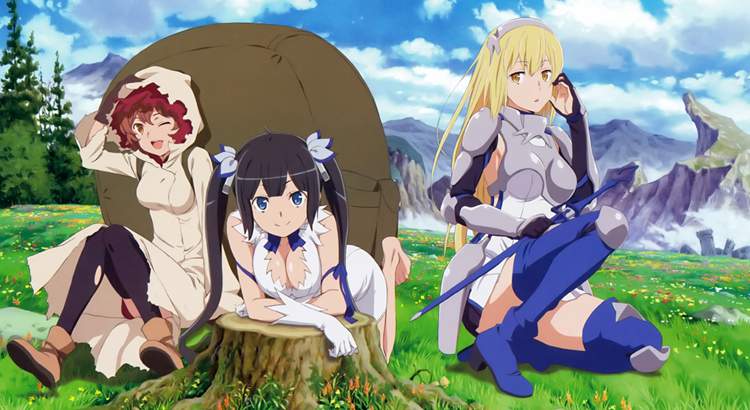 DanMachi is also called as “Is It Wrong to Try to Pick up Girls in Dungeon?” or “Danjon ni Deai o Motomeru no wa Machigatteiru Darō ka”. The Japanese series that is a light novel has been penned down by Fujino Omori.  The plot of DanMachi follows around a 15-year-old boy named Bell Cranel. He is a solo traveller and also goes by “Little Rookie”. He is the member of Hestia Familia and works in the dungeon of the fictional city of Orario. The people in the world of Orario form groups which called Familia or Famiria and each group name is originated after their deity. From goblins to dragons, the dungeon contains many deadly creatures. He admires and respects Wallenstein, a strong and beautiful swordswoman of the Loki Familia. Bell falls in love with her in the dungeon, when she saves his life from Minotaur. He is unaware of the fact that many other girls like mortals and deities have endearment for him.

As the days pass by, he gathers strong people and forms alliance.  In each level, he gains new skills and abilities. Long story short, the adventurers from different Familia visit dungeon to defeat monsters to gain their crystal shards. These shards are used to craft magical objects; they can even be exchanged for any currency. The adventures are grouped into levels, as their level increases, their skills and abilities increase as well.

If you have enjoyed DanMachi and would like to watch other anime which delves into similar themes or plots then this list is for you. With that said, here is the list of anime similar to DanMachit hat are our recommendations. You can watch some of these anime like DanMachi on Crunchyroll, Netflix or Amazon Prime or Hulu.

Samurai Champloo may not be a very well known anime but it’s one anime that stands out from the rest by giving its audience a wild vivid fusion of multi-cultural pulp fiction sensibility. It has an intense blend of both action and drama depicting Edo- period history and hip hop culture. It also represents the influence of the western culture on the youth of Okinawan youth and their openness towards multiple cultures.

The story revolves around the lives of three major characters- Jin, Mugen, and Fuu who set out on a journey to find a Samurai who smells like sunflowers. The entire series put immense emphasis on the importance of the journey the three characters and how each of them transforms through it. Throwing some light on each character’s past with each episode the series shows how each character has evolved to become who they are. It also features different fighting styles of each character where Mugen has more of a modern unorthodox style based on breakdancing and Jin has a very typical Samurai style of fighting, both masters of their own techniques.  The series has beautiful visuals backed up with lo-fi hip-hop music made by Japanese musician Nujabes. Definitely, a must watch for all Danmachi lovers.

Samurai 7 is an anime depiction of a famous classic Japanese film Seven Samurai. Everything depicted in the anime has been picked up from the film just making the whole anime a bit more bizarre than the actual movie. “Bizarre” because the anime has featured zombies, cyborgs, and other fictitious characters. The story takes place in a world where samurai fight for honor, merchants seek riches and bandits are samurais who abandoned their bushido. The anime revolves around a very raw plot that offers strong characters and a grim yet beautiful ending. For those who seek a happily ever after kind of series, this one may not be for you, but those who seek fully fleshed and impressive characters then this may be what you’re looking for.

One of these impressive characters is Ukyo who turns out to be something very different from what you’d be expecting. There’s nothing more interesting than a character who is a genius when it comes to pretty much everything. Ukyo’s character is something that will keep you hooked on to this series. Overall the series has a well fitting soundtrack and worth watching but make sure you watch it all the way up to the end before you judge.

One of the best anime for those who seek a quick pick me up and finish off in one go anime. Afro Samurai is a 5 episode series that does not beat around the bush by giving out detailed stories of any of the side characters. The plot mainly focuses on the story and character of the main protagonist. The story is about “Afro Samurai” who is on a journey to be the best samurai in the entire world. It’s a typical samurai story where the main character seeks to avenge his father’s killer all of this depicted in a very artistic and gory way.  For those who wish to see a quick time killing samurai action anime, this one’s just for you. 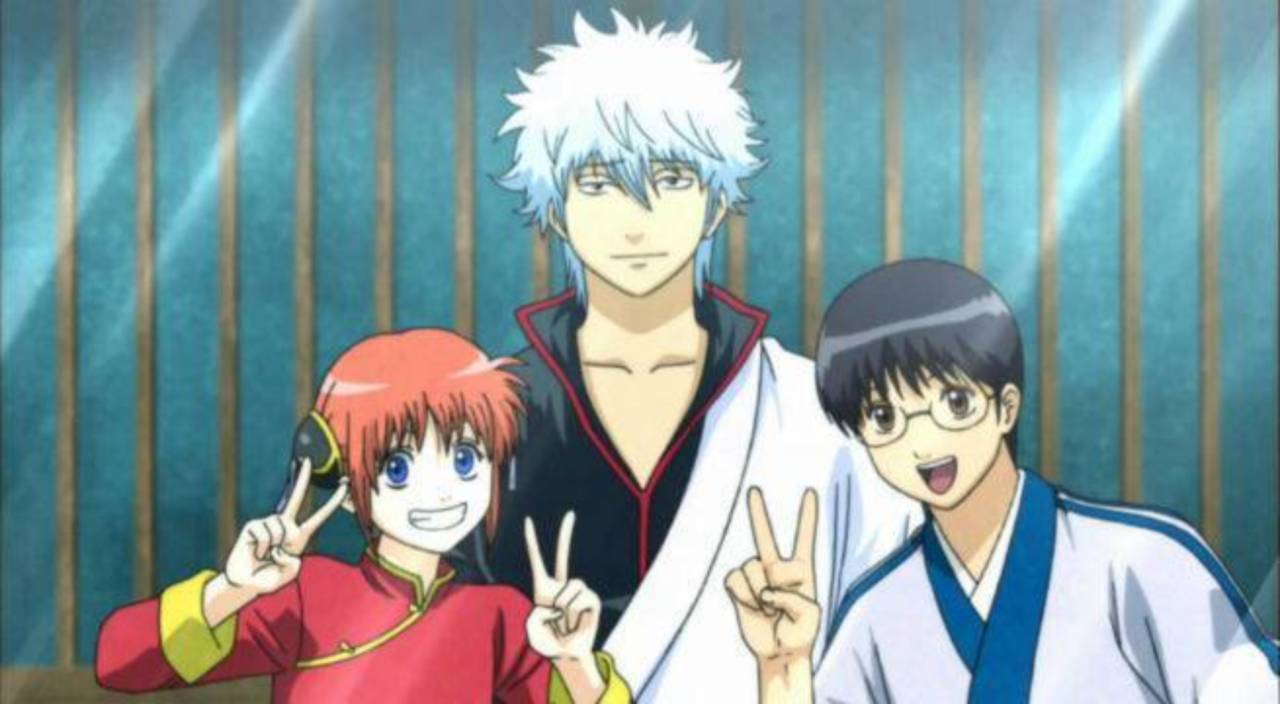 Gintama is mainly a comedy series which is one of those few anime that popularised the idea of samurai sit-coms. The story is set in an era where the world is being conquered by an alien race known as the Amanto. This alien race has banned humans from carrying swords in public places in order to avoid samurai uprisings. Though it seems to have a serious concept the whole series has a very humorous appeal which comes from the characters themselves.

The story is about Sakata Gintoki and his two friends, one of whom is a normal teenager named Shimura and the other is an alien who looks human named Kagura. The series does not really have a consistent story throughout but is fun to watch the three characters go about with their days goofing around and just trying to make the world a better place. The anime is a true winner when it comes to comedy and humor. So if you’re done watching all serious baloney samurai based series and still want to watch some light samurai stuff, then do give this one a shot. 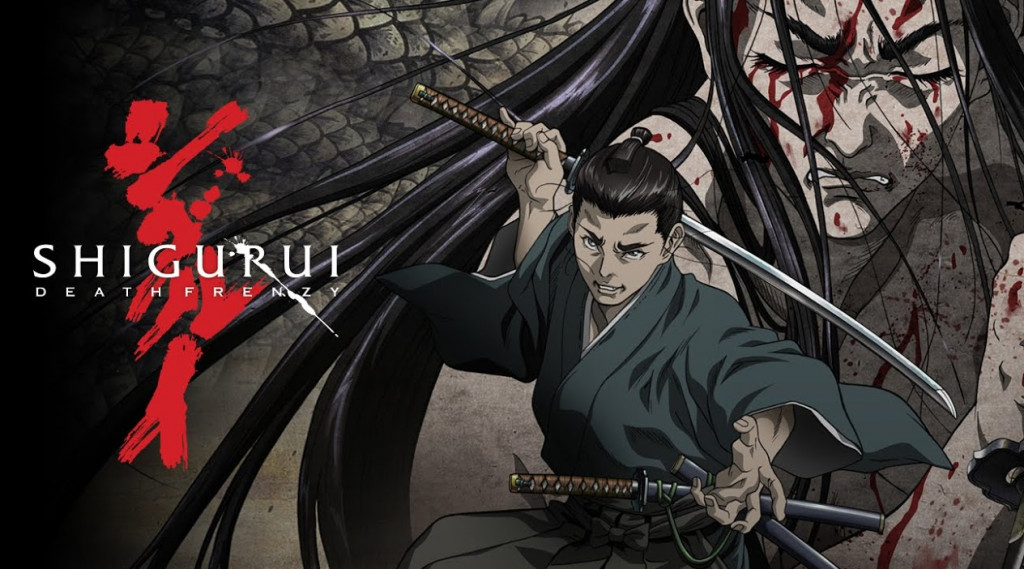 An anime with a very serious tone representing a very close depiction of real historical events. A very suitable series for those who enjoyed the whole tone and pace of ‘The Last Samurai’, this anime offers something very similar. Beautifully executed with the main characters having from little to no dialogues, this anime portrays visuals of the purest vintage colors with emphasis given to the features and uniqueness of each character.  Shigurui is an elegant yet brutal representation of the Edo period. A pre-warning though, there are many adult scenes in the anime depicting gore and sexuality.

7. Sword Of The Stranger 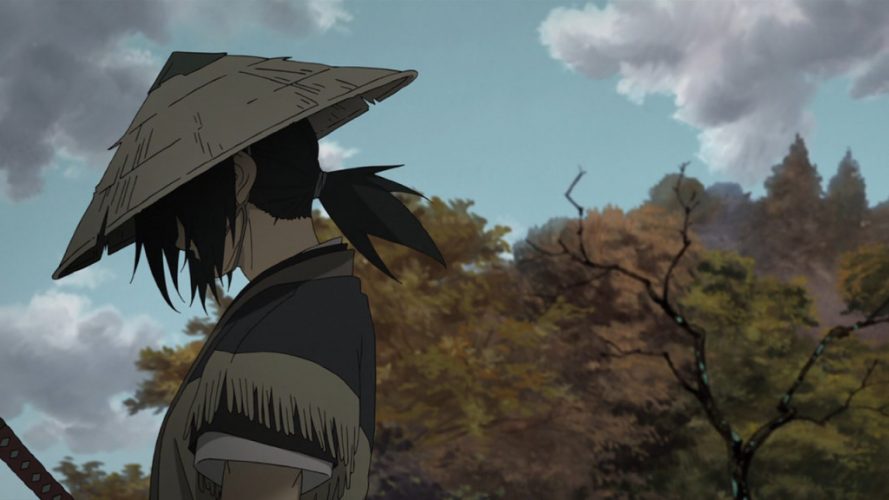 Every once in a while an anime comes out of nowhere and sweeps you right off your feet. Sword of the stranger is one of those anime. Sword of the stranger is an anime movie that offers solid characters, a very good plot and amazing action scenes. Though the story is typically like any other historic samurai based anime, this one offers its own set of twists and turns in the plot keeping the viewers on their toes. The best part about this anime is the artsy fight scenes. The fight scenes have been shot with grave details without excessive slow motioning and a lot of bloodsheds. If you’re in for some awesome samurai madness and don’t have much time to follow a whole series, then beg, borrow or steal but do get your hands on this one. 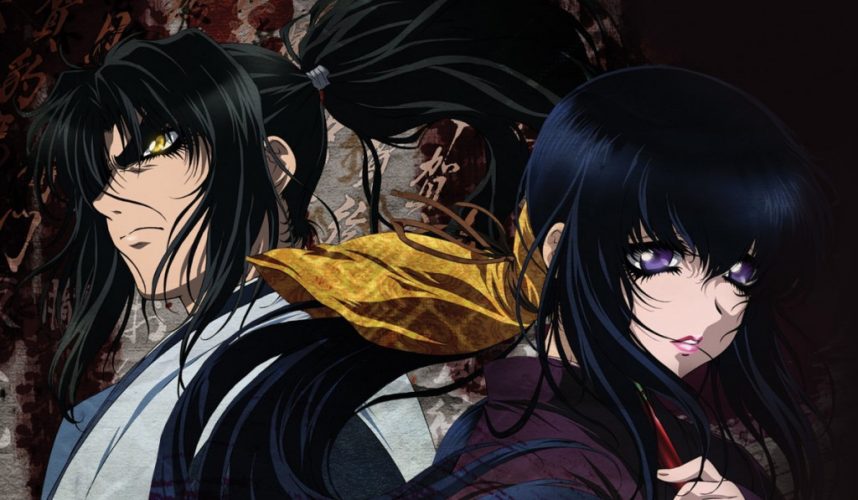 The story of this anime is rather simple. Two ninja clans just trying to kill each other heartlessly followed by endless dying. But deeper into the plot there is a secret stint of an ultra-violent love story which is pulled off really well. Most characters are not really built upon as the story is more or less about endless killings between two ninja clans but still, the anime pull off all of this with an artistic approach. The characters of the show seem to have weird deformations with absolutely no reasoning behind it. The only characters that make sense are the depicted Romeo and Juliet and a lot has been put into their development.  If you are an anime lover and enjoy watching intense artistic action scenes, then spare this one sometime this weekend.

5. Blade Of The Immortal 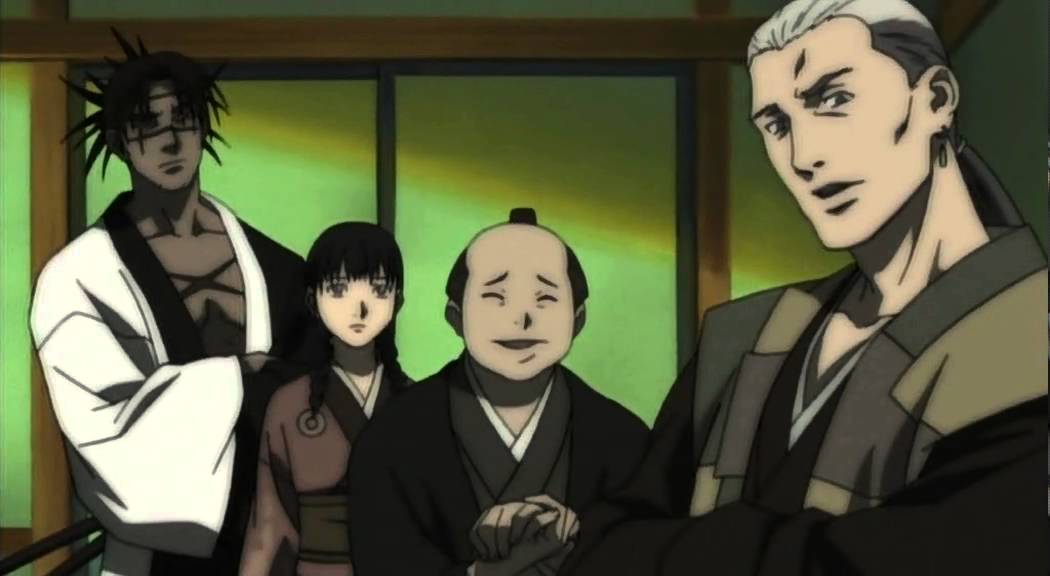 This story is about a swordsman named Manji who lives a cursed life. He must kill at least 1000 evil men before he can have the privilege of dying himself, till then he’s immortal. The anime later turns into a revenge story when Manji comes across an opponent who may be rival he’s been looking for.  A slow yet enjoyable series if one watches it with enough patience and can be enjoyed if one is looking for a dark revenge samurai story. 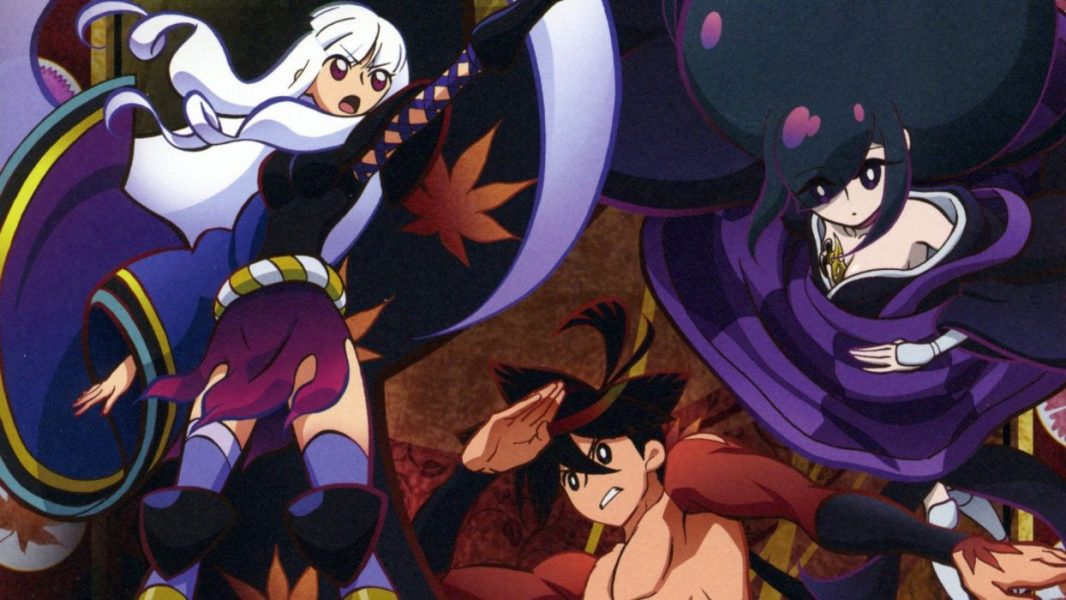 Katanagatari, as the name suggests is a “story of swords.” Adapted from a light novel series written by Nisio Isin, Katanagatari offers a very good script with clear and concise ways of executing the storyline. The whole series has a unique set of visuals offering a vivid westernized pop art style of drawings.  The story is about an incongruous pair that goes on a quest to seek the twelve swords of legend. It features an interesting concept where none of the two characters possess an actual physical weapon. One’s weapon is the mind and the other’s is his own body. A genuinely offbeat anime that’s worth a watch if you’re looking for something different. 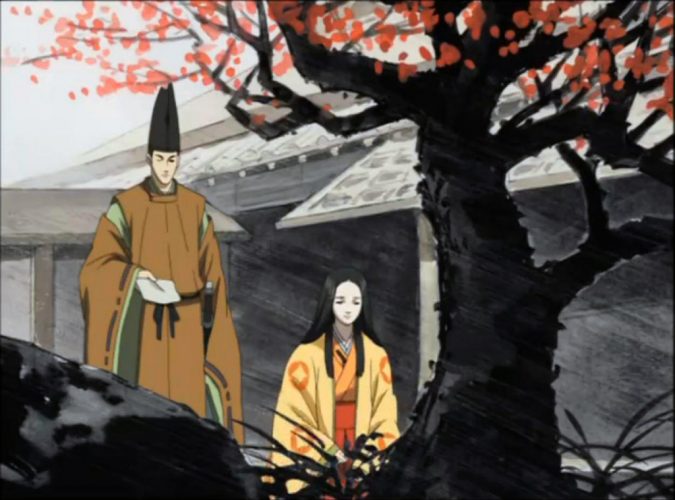 Otogi Zoshi offers a very interesting storyline that talks about tales of the early 1100s where a young Japanese princess disguises herself as her dying brother and goes on a journey to collect artifacts that will bring peace and harmony to her homeland.  The show has a second part which features the same characters in the present reality which is not as interesting as the first one but still manages to keep you engaged in the series. With time you start to develop love and respect for all the characters involved in the series and the portrayal of human bonds and relationships is a strong point for this anime.  Definitely, a “watch and form your own opinion” type of series which will give you mixed feelings. 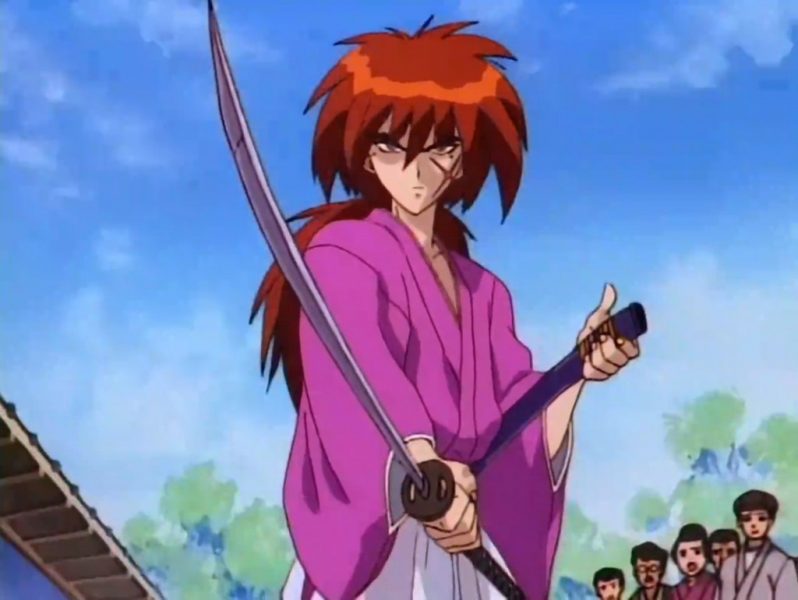 Easily one of the most well known and widely appreciated samurai based anime series. Based off a well-known manga that goes by the same name, the series is set up in a post samurai era. The hero is a former assassin who only demonstrates his sword to show that he has sworn off the sins of his past. But as the protagonist befriends other characters he is obliged to break his vow and protect the people he loves from the dark spaces of his own past.  The story offers almost everything including depth, emotion, romance, action and even mystery. The animation may seem a little older but what it offers is perfect considering the fact that it came out in 1998.  Surely a must watch for all anime lovers out there as it offers a little bit of everything. 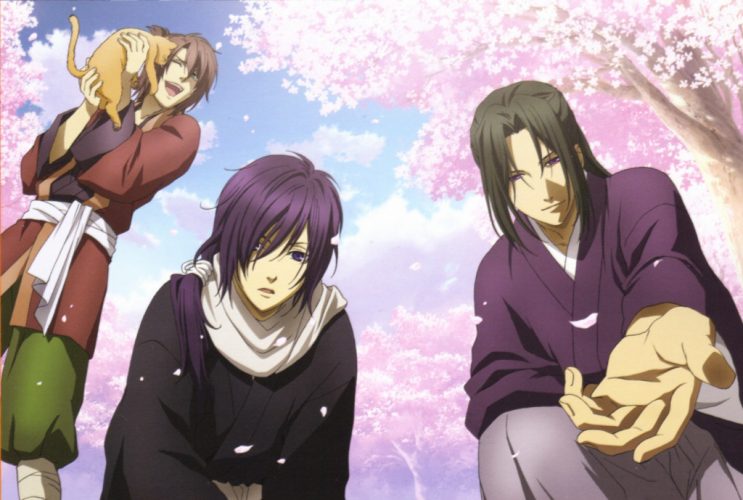 Hakuouki is based out of a PS2 game. The series follows a very deep storyline that depicts the changing times in Japan due to the influence of the western culture from the eyes of secret police that is trying to restore order. Like other samurai based anime, this one too is inspired by historical events that involved the shift from the old samurai ways of combat to the incursion of western forms.   It represents a very good image of how certain historical events had unfolded. If you enjoy historical tales that are a mix of action and drama, then this one’s for you.