Are Al And Jessica From Love Island Australia Still Together?

‘Love Island Australia’ season 4 was loved by all the fans for its surprise elements. It featured several contestants with distinctive personalities, and everyone brought something to the table. So did Al Perkins and Jessica Losurdo, a confusing yet cute couple on the island. Their time in the show was filled with fights, lovemaking, and passion! Who doesn’t love that? The fans swarmed in to root for the couple or just to keep an eye on where exactly their relationship was headed. So here’s us, answering the question burning into your head, are Al and Jessica still together, or have they split up?

Al Perkins was already quite popular before joining ‘Love Island Australia,’ through his appearance on the Australian version of ‘Married at First Sight,’ wherein he tied the knot with Samantha Moitzi. However, their bond didn’t sustain in the real world, and they called it quits soon after the season ended. Following his stint on ‘MAFS,’ Al amassed a great following and left his decade-long full-time job as a carpenter. The Sydney-based 26-year-old entered the swanky villa of season 4 of ‘Love Island Australia’ as a bombshell and turned many heads, immediately becoming a fan favorite. 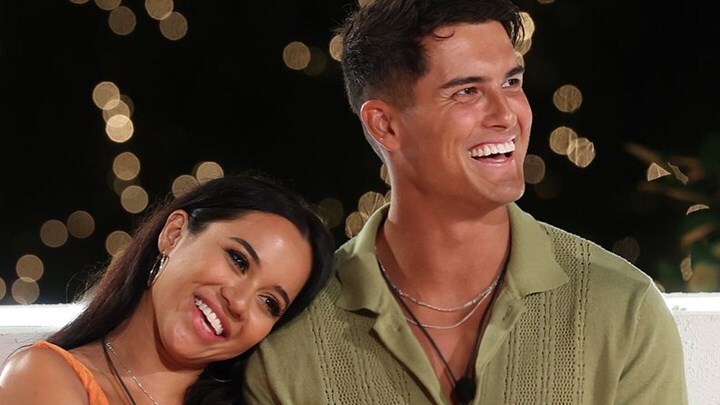 Jessica is more of a chilled and laid-back girl who enjoys gaming and spending time with her family. When she is not doing that, the Western Sydney girl works as a Risk Analyst. Throughout the show, Jessica seemed extremely straightforward with her approach. We should be grateful for her Italian and Philippines heritage genes, which made her so funny and charismatic because everything she did was quite entertaining! The couple had quite a journey, from awkward fights about Al’s opinions on “being open to finding love” on the island to sharing their first kiss.

When the couple met on the show for the first time, all eyes were glued to them, and the audience was eager to know how things would play out when they were already so shaky. At one point, Al even said he’d be happy if his ex Samantha Moitzi made an appearance on the show! He had a lot to say, and most of it was controversial, but somehow things did not fall apart. They had heartfelt moments, such as when Al made Jessica an omelet. The couple also hurdled up with the islanders for giving them TMI (too much information) about their intercourse. So, the couple had serious fights but also patched up right after. They seemed driven to be together, so could we take that as a sign of them working things out and still being together? Let’s find out!

Are Al and Jessica Still Together?

No, unfortunately, Al and Jessica are no longer together. The reality TV personalities decided to be friends after their time on the dating reality show and deemed it best for both of them. They revealed that they regularly facetime each other and are grateful for their former partner’s presence in their life. However, both AI and Jessica made it quite clear that they are just friends!

In an interview with So Dramatic!, they had a bit of a mismatch in their statements, where Al claimed to be good friends, while Jessica hinted that they might still get back together. Although Al did express guilt about not being serious on the show, he said, “I looked back now, and I wish I was a bit more vulnerable. The jokes caused conflict, and if I could go back, I wish I could change that a little bit.” So, at least he’s self-aware and is owning up to his mistakes, which is great progress!

It’s sad to see how things turned out for the two because Al also met Jessica’s mother after the show, so they clearly tried. Even after splitting up, the two were open about their respect and admiration for each other in the season finale. Al, in particular, was happy about his journey. He said, “If I could go back in time and redo it, I’d do it all again with Jess.” He continued, “She made my journey so amazing, it was such a breeze, and she was the best partner I could be Coupled Up with when I was in there.”

AI and Jessica were the last pair to leave the island, and it is evident that the two have no hard feelings for each other. From what we can tell from their statements and the fact that they are still following each other on Instagram, fans can still cling to hope as they are in touch with each other, and if things get better, they might reignite the flame. Having said that, until either of the parties announces anything of that sort, we confirm that AI and Jessica are just friends and focusing on their individual professions.

Jessica is pursuing a modeling career and doing fun Q&As for her fans on Instagram. On the other hand, Al is invited as a guest to a podcast to share his experiences with reality TV shows and is getting brand deals from fashion companies. The two seem to be doing amazing in life for themselves, and that’s what we want as their well-wishers. Having said that, fans can always be on the lookout for a miracle!

Read More: Are Callum and Madeline From Love Island Australia Still Together?