Are Ant Anstead and Christina Haack Still Together? 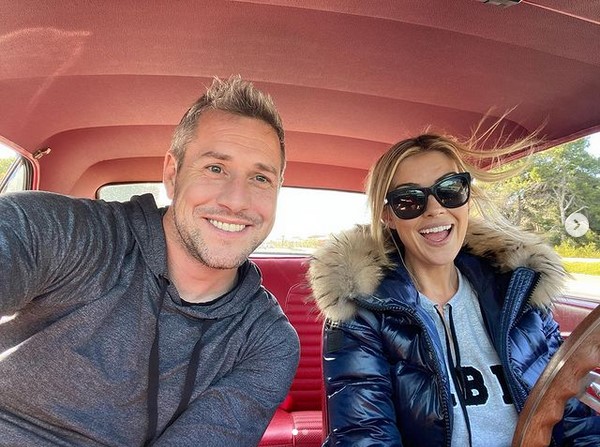 Christina Haack is a real estate investor and TV personality, best known for her show, ‘Christina On The Coast’ that follows Christina as she helps her clients transform outdated and old properties into high-end living spaces. The immensely successful TV personality met Ant Anstead in 2017. Ant, who is widely recognized for co-presenting the automotive show ‘For The Love Of Cars’ is also a motor specialist and a car designer.

Christina and Ant hit it off on their first meeting and shared instant chemistry, which led to them dating each other for a while and eventually getting married. Over the course of their marriage, the two have had their fair share of ups and downs. Naturally, their fans wonder if this beautiful couple stood the test of time and remained together. Let’s find out, shall we?

In October 2017, Ant Anstead met Christina Haack on a blind date that a mutual friend set up. Christina has often mentioned how it was love at first sight for them, and they connected well since the time they first met. At that time, Christina was awaiting the finalization of her divorce from her former husband, Tarek ElMoussa, while Ant had just divorced his ex-wife, Louise, to whom he was married for 12 years. Christina and Ant also have two kids each from their previous marriages.

When Ant and Christina started dating, they wanted to keep it private and did not post about it on their social media profiles. After more than a year of dating, the couple decided to make it official and exchanged wedding vows in their home in Newport Beach, California, on December 22, 2018. They chose to keep their “winter wonderland”-themed ceremony private with a handful of their closest friends and family in attendance.

Post their marriage, the lovely couple led a happy life. In a now-deleted post, Ant shared how he and Christina express their love by wishing each other a “happy anniversary” every Sunday since they met. When talking about her husband, Christina said, “I felt like I had known him forever, and we’re just super-comfortable with each other. We just have a great relationship; he’s amazing. He’s super-caring and understanding, and he really motivates me and supports me.” After their marriage, Ant also featured on her show ‘Christina On The Coast.’

On September 6, 2019, the couple welcomed their baby boy, Hudson London Anstead. Having a baby with Ant was wonderful for Christina as she stated, “He’s awesome with my children, and he’s already an amazing dad, but I’m looking forward to having a baby with him as well.” She added that her pregnancy had made her newlywed life a little crazy, but her husband had been understanding, and all was well between the two. Ant even posted a beautiful picture of the new mother and child saying, “welcome to the world! Hudson London Anstead. I am in awe! Mummy and baby are simply perfect!”

Ant and Christina appeared extremely happy with each other while celebrating their two-year anniversary in October 2019. On the occasion of their anniversary, Ant wrote, “I am blessed, I am lucky, I am loved, I am full, I am happy, I am yours. You saved me, and you complete me.”  Even during the covid-19 lockdown, the couple jazzed up their relationship and celebrated each other’s birthdays most beautifully. Ant also posted a heartfelt message for Christina on the occasion of mother’s day in May 2020.

Unfortunately, after one year of having a child together, Christina and Ant announced that they were getting divorced. It was a shock out of the blue for their fans as previously neither Ant nor Christina indicated anything about going their separate ways. In September 2020, in a now-deleted post on Instagram, Christina announced their divorce, saying, “Ant and I have made the difficult decision to separate. We are grateful for each other, and as always, our children will remain our priority. We appreciate your support and ask for privacy for us and our family as we navigate the future.”

Later, Christina also posted on Instagram, clarifying how she never intended to be divorced twice and that she had been struggling with anxiety. Christina further noted that she was taking her challenges as opportunities to grow and was working on healing herself. She cited “irreconcilable differences” as the main reason behind their separation.

Ant Anstead too issued a statement on Instagram, which implied that the divorce was Christina’s decision and supposedly not a mutual one. He also said that he found it difficult to cope with the situation and revealed that he had started taking a breakup and recovery and healing course. In November 2020, Christina filed for divorce along with the joint legal custody of their son, Hudson.

In Ant’s first interview, after the divorce, he told People, “Not only have I improved my mental health, I’ve actually made a real conscious decision to go and improve my physical health.” The family still shares a friendly relationship, and all five children share a close bond. Both Christina and Ant encourage their children not to lose touch as they shared a beautiful picture of the children face-timing each other.

Ever since they have been separated, both Ant and Christina have been working towards their betterment. The two have managed to share a healthy co-parenting relationship and we believe it will stay that way. In February 2021, Christina announced in an Instagram post that she is finally changing her last name to her maiden name, “Haack.”