Are Bryan and Sarah Baeumler From Renovation Island Still Together? 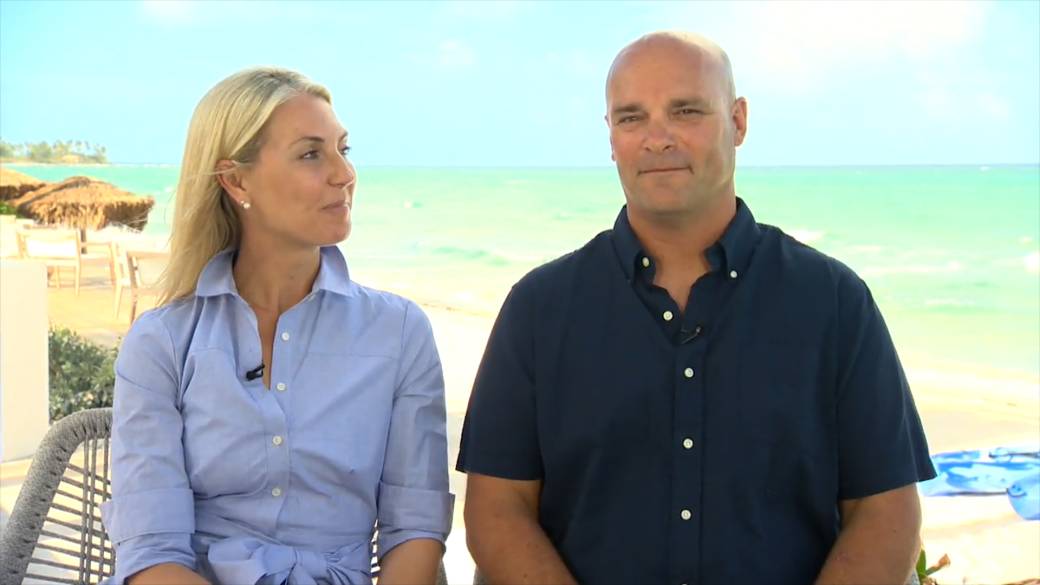 The hit Canadian Television stars, Bryan and Sarah Baeumler, have achieved much more than just featuring on a couple of reality shows. In addition to building their own successful careers, they have had the vision to pull off the extraordinary together. One can only imagine the amount of strain having an all-consuming professional life can put on a marriage! Their fans were shaken to see that the couple’s latest project almost tore them apart. But did it? Here’s what we know about the ambitious task of building a resort from ground-up and the implications it has had on their marriage.

Sarah and Bryan Baeumler are proud co-owners of a 10-acre property in the Bahamas. HGTV’s announcement described the place as, “a world-class island oasis complete with 18 luxurious hotel rooms, 22 oceanfront villas, and a host of breezy resort amenities.” Its name is in reference to the cerulean-colored sea (deep blue sea). The boutique resort today stands at the location where Emerald Palms hotel was built in the 1960s and place setup has been dreadfully empty for over a decade.

The entire process of demolishing the old hotel and the couple envisioning a grand resort standing amidst the rubble is the premise of  HGTV’s brand new show ‘Renovation Island’. Premiered in June 2020, the show has finally brought them to the U.S. — two seasons of which already aired in Canada under the title ‘Island of Bryan’.  Every episode filmed the couple locking horns through the tedious renovation and designing processes. Sarah and Bryan even admitted to having suffered a few cracks in their marriage because of their individualistic personalities. Their failure to entertain the creative ideas proposed by the other was the trigger point for the innumerable fights. By the end of the season, their fans seriously doubted if the couple would remain married after witnessing the animated debates between them.

The Baeumlers have been using the spotlight to their advantage that has followed them since 2009 when they starred in a show titled “House of Bryan” for HGTV Canada. The extremely popular show won the hearts of millions as it went on for four seasons. But they had met years before the concept of a reality series had even managed to surface.

Sarah and Bryan had known each other through their high school years. But they did not start dating until a decade later after being reconnected due to an e-mail that they received by a mutual friend in which they were marked together. God has His mysterious ways! Soon after, they went out for a casual coffee meeting and felt an instant pull towards each other. In 2001, Bryan put in his best efforts to plan their first date: a delightful evening out in Toronto, Canada. What’s better than being an audience to a theatrical performance? Watching a Broadway musical of ‘Lion King’! He reportedly wooed his now-wife by this romantic play and followed it with a sushi dinner. Three years of dating each assured the couple that they were a match made in heaven!

Sarah was proposed by her husband in a rather amusing way. Bryan had set his heart to ask for her hand on a hiking trip. The trail that the had chosen was a picturesque location to carry out the plan but that very day, it was extremely foggy. He had to postpone it until later that night.  They were married at the Graydon Hall Manor in Toronto on September 3, 2004. Preposterously, their honeymoon in Vegas got canceled due to a hurricane that hit the Florida coast. Their 5-star beachfront property shared the same fate this year when the Dorian hurricane hit the continent. Luckily, the construction process has successfully survived the devastating hurricane, a world pandemic, and for the most part the conflicting opinions of the spouses.

Are Bryan and Sarah Baeumler Still Together?

Despite having to resolve various complications like logistics, rusted generators, and termite damage, not all of which could have been predicted, Bryan and Sarah have passed the hard test. Those around them had gone to the extent of calling the couple crazy for taking on a task so enormous. A project so demanding of time and cost could have easily taken a toll on their marriage but it did not.

The couple has been working together as professionals for almost 15 years now in a co-owned company called Baemuler Quality Construction, under which they have been building homes. Bryan, a licensed contractor, solely made the executive decision of renovating the Bahamian property into a luxury, environmentally sustainable resort. Undeniably, it caused Sarah a lot of distress as they had recently had their fourth child, namely Josephine.

Apart from making the big move and completely uprooting their well-settled life in Canada, their first three kids: Quintyn, Charlotte, and Lincoln looked like they were constantly living in a giant sandbox. The chaotic state of the family distressed the couple greatly. Also, an investment of a whopping $10 million went into the reconstruction. But the couple stands strong together as they enjoy the thrill of their latest venture. Sarah and Bryan today stand as an instance of all that can be achieved with a little patience and a lot of faith in your partner’s vision.

The hotel, Caerula Mar Club, had opened back in February but had to be temporarily shut down due to the ongoing ‘Coronavirus’ situation.  The luxury Bahamian vacation destination has been planned to re-open for the tourists by October or November.

Read More: What’s the Net Worth of Renovation Island Couple?