Are Shada and Emad Based on a Real Refugees? Where Are They Now?

Netflix’s ‘The Swimmers’ is a story about refugees fleeing their homes in search of a safer place. It mainly follows the journey of Yusra and Sara Mardini, as they leave Syria and go through a trying series of events to emerge victorious in the end. On the way, they cross paths with many other people who are in a similar position. These people, too, have left their homes due to similar reasons. Shada and Emad are two people with whom the Mardini sisters form a close bond. If you are wondering whether they were real people and what happened to them in the end, then here’s what you should know about them.

Are Shada and Emad Based on Real Refugees?

‘The Swimmers’ is based on the true story of Yusra and Sara Mardini and the film closely follows the events that happened in their life. However, apart from telling the tale of their resilience and strength in the face of all odds, the film also aims to represent the experience of millions of other refugees who are forced to leave their homes due to the instability and lack of security in their countries. To focus on this aspect of the story, the filmmakers made a few changes in the narrative, which expands as the girls meet other people while crossing from Turkey to Greece. This meant that they had to add some new characters, like Shada and Emad, who aren’t necessarily based on real people. 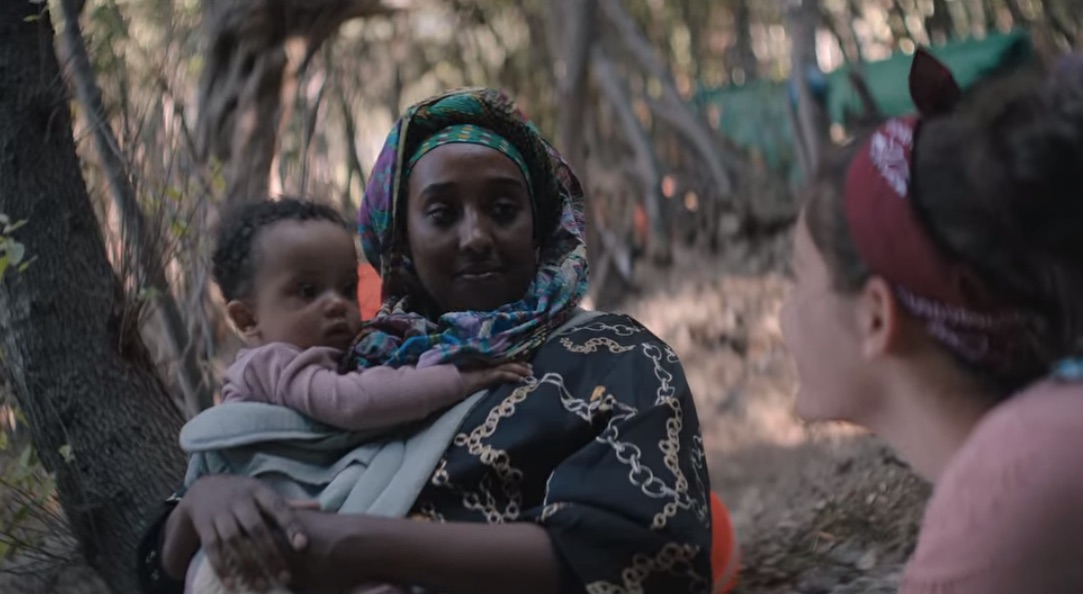 Explaining the decision to make these changes in the story, director Sally El Hosaini told Forbes, “Predominantly we stuck to the truth, but there were times when fictionalizations were made – but they were always made to allow us to honor the larger refugee story rather than just the story of Yusra and Sara. As inspirational as Yusra and Sara’s story is – they are the 1% – and we also wanted to represent the 99% of refugees that don’t have that happy ending or that outcome.”

With people like Emad and Shada, the story was expanded to the experience of refugees from Afghanistan and Eritrea, among other places. With Emad, we see a man who has left his home to seek a better future in a place where he can also provide for his family. He wishes to get a proper job and send money home, making it even more important for him to survive the ordeals of the journey. He doesn’t have the option of going back.

We also see a similar thing with Shada, who has left Eritrea with her daughter. She has also left her home in the search of a better future in the UK. Things are more complicated for her because she has escaped her husband, who she says is not a good person. Her character represents many women who are forced to flee with their young ones. While in her interviews, Yusra has not mentioned a woman named Shada; she did talk about a boy who was in the same boat as them.

“There was a boy, Mustafa. He was only about six. He was really funny, and when we were in the forest, we were playing with him and joking with him. I think when we were pulling the boat, we wanted to save everyone, but we were thinking the most about him,” Yusra told Vogue. It is to reflect the reality of young children, who form half the population of refugees in the world, that the filmmakers added the character of Shada and her infant daughter in the film.

What Happens to Shada and Emad in The Swimmers?

While Yusra Mardini gets to live her dream and goes on to do great things in her life, the stories of other refugees don’t end similarly. Shada, who wanted to go to the UK, has her journey halted in the middle. Like a lot of other people, she is turned around at the border and deported back home. Sara manages to contact her and discovers that Shada and her daughter are back in Eritrea. It is this harsh reality that the film wanted to convey through Shada’s arc.

“Lots of people don’t have a happy ending. We wanted to tell this story so that everyone can think about them, too. The goal of this movie is way bigger than my story – we want it to make an impact on the world,” Yusra said, while in conversation with The Guardian. Though Shada doesn’t get to complete her journey, things look better for Emad. Around the time Yusra competes in Rio Olympics, Emad is still in Germany, waiting for his papers to come through. It is possible that he gets to stay and build the life he went to such great lengths for.

Read More: Sara Mardini: Where is Yusra’s Sister Now? Is She in Jail?