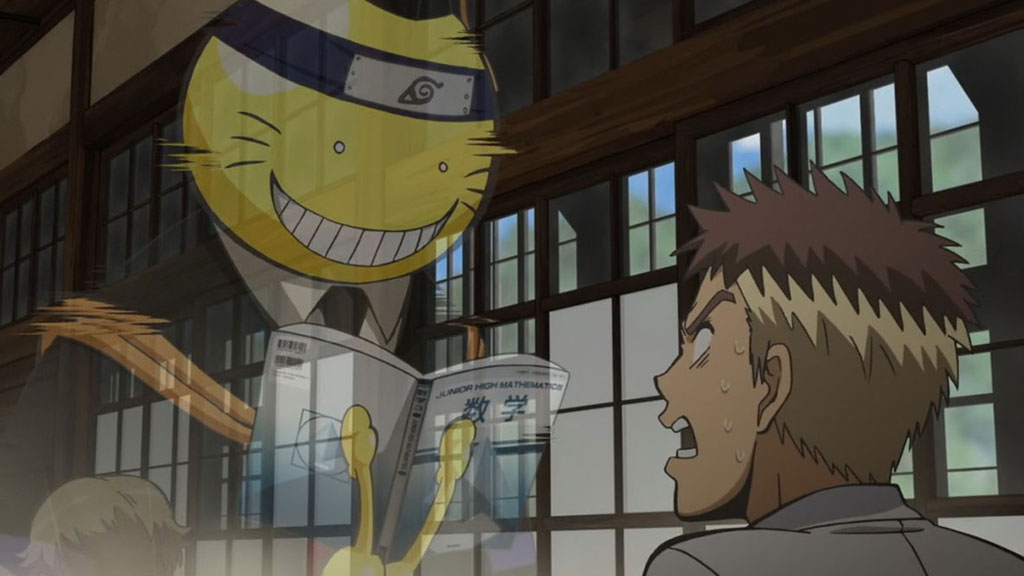 Combining the first and second season, ‘Assassination Classroom‘ has a total of 50 episodes. It takes you through an amazing journey full of comedy and will certainly make you laugh a lot. But then suddenly as it starts to reach an end, it turns into a very different direction unlike any other drama anime out there. Remember that dramatic scene from ‘Death Note’ where Light “takes a potato chip and EATS IT!”? That’s the kind of stuff we’re talking about here.

The second half of the show begins with some phenomenal storytelling. All anime fans owe it to themselves to watch this season. It starts off a little slow but for some strange reason, it still makes you want to watch another episode and you don’t feel bored at all. Even with the snailish pacing, it somewhere gives you the hint that if you stick around, something big and worthy will come your way. One of my own biggest personal fears regarding this show was the number of characters in it. But the anime manages to deal with this surprisingly well and not even once lets feel overwhelmed by the number of characters.

The popularity of ‘Assassination Classroom’ is off the charts. Apart from the manga and the anime, this show has its own live-action movie and even a DS game. It’s not only doing well in Japan but even in the West as well and you can see why. Forums and discussion boards have been full of conversations about it ever since the first episode. What started off as hype around its giant octopus soon turned into discussions about ugh..emotions! Some fans are so crazy about it that they would swear that this anime is just perfect and has no negative aspects to it but obviously we don’t believe that and we will get to its flaws later in the review section.

The end of this season leaves you with a bittersweet feeling. You’re completely satisfied and yet full of regret. Satisfied because ‘Assassination Classroom’ Season 2 is one of a kind, and full of regret because even though it has 25 episodes, which are more than double of the standard 12 episodes of most anime per season, it still makes you feel like it ended too soon. On top of that, like most people, you probably binged on it and well, time does fly when you’re bingeing on something so good.

But in the end, we have to accept the fact that all good things come to an end and move on with it. Only this way we can patiently hope that there will be another season and there will be another opportunity for us to watch something so great on a weekly basis — but will we? I don’t think so! Before we review this “almost” perfect anime with slightly more details on what makes it so great and what can actually make it perfect, let’s first just go through the release details of the show and also a brief synopsis that will bring back the sweet memories of the show. All those who have not seen this anime yet, my advice to them would be to skip the plot section of this article and jump to the review.

Lerche Studio’s ‘Assassination Classroom’ Season 2 was first aired on January 8, 2016 and went all the way up till the 1st of July, 2016. Within this span of 6 months, it came out with a total of 25 episodes with each one being 23 minutes long. The manga that was released in the year 2012 had close to 180 chapters till date, excluding the extras. As far as Assassination Classroom Season 3 is concerned, check out the details here.

The plot of the second season starts off exactly where the first season had left off. The kids start wrapping up their vacation and Koro-sensei slowly relaxes out of his defense mode. They all go back to school and in no time, there is another test battle. The test battle was the highlight of the first season because the first time, it was just so much fun to watch. But the second time, in the beginning of this season, it feels a little monotonous and dull and repeating it just turns out to be a bad idea.

Later, a new character named the Reaper is introduced to the show, who has his eyes set on Koro-Sensei and plots to kill him using Bitch-sensei as bait. The students soon find out about Reaper’s plans and somehow manage to stop him from killing Kara-Sensei. As typical as this arc may sound, it actually builds the foundation for what follows.

The show then proceeds to the second half of the season where it enters a new arc. This new arc gives you some unforgettably amazing episodes. This is when you realize that it is one of the greatest anime out there. Kaede’s backstory is explored and we also get to see the much-awaited origin story of Koro-Sensei. I won’t be revealing too much about this part because it deserves to be seen rather than being read about. The backstories just take the emotions of this show to a whole new level and you start developing a deep attachment towards both Koro-Sensei and Kaede. Giving the show such a strong emotional touch felt quite surprising. The first half of the season follows the typical ”Assassination Classroom” storyline, which is fun to watch, but the other half is just phenomenal. After making such an amazing breakthrough in its second season, we cannot imagine what the next season holds for us. We just hope that it comes out soon because the post-anime blues of this one are now starting to kick in real hard.

‘Assassination Classroom’ never appealed to anyone for its storyline, especially in the first season. The only reason why people started watching it is because the internet is flooded with its memes and funny videos since its release. But what started off as a mere obsession with its uncanny sense of humor soon turned into an unforgettable emotional journey that holds immense potential. The beginning of the second season is more like a roller-coaster ride and you might go through several mixed emotions. The first part feels like a sort of a filler that is just repeating the elements of the first season. After a while, you even feel like giving up on it but that’s when the backstories kick in and you can’t help but admire your patience and, yeah, the show as well. The story overall is quite impressive and the credit goes to Yusei Matsui who absolutely nails it.

Forgive me if you are a die-hard fan of ‘Assassination Classroom’ because this is the part where I am going to criticize the anime a little. I hate to say this but for a great anime like this one, the animation sucks! The only reason why no one’s really talking about it is because the other elements of the show are almost perfect. So everything just manages to make up for the poor animation. There are parts in the series where the lighting is so bad you can’t help but wonder if you’re watching the original version or the censored one. Even the character designs, though not so bad, remain the same as the first season. From an anime of this scale, the least you can expect is some improvement in the character designs. The backgrounds are dull and boring, and that’s probably the reason why it has been darkened, so that we don’t even notice what’s in the back. The anime really needs to improve this aspect.

When it comes to sound, I wouldn’t say ‘Assassination Classroom’ is bad but then it’s not all that great either. The background tracks during action scenes are just average and don’t really add much value or emotional depth. The OSTs received mixed reviews, although I personally liked them. However, with time, I believe these too will become boring unless they’re changed.

The characters of an anime can either break it or make it the best show ever. The latter applies to this anime as the characters just make you forget all the other flaws. Two simple things make the characters of the second season so great: subtle, consistent growth and calculated development. Their growth happens so steadily you almost feel like you are growing along with them. And before you know it, you start getting involved in every emotion they are going through and quite literally everything they do just becomes relatable. ‘Assassination Classroom’ has one of the most likable characters ever seen in the history of anime shows and they entirely “steal the show”.

Overall, no one can argue with the fact that ‘Assassination Classroom’ has immense potential from here on and if it manages to keep up the great work, it will secure a place somewhere on top of the anime hall of fame. There is still, however, some room for improvement, especially in the animation department and we hope Lerche Studios are well aware of that by now. I could have given season 2 a perfect 10/10 but then I know that it still can improve a little, so let’s just settle this with a 9 for now.

The English Dubbed and Subbed versions of ‘Assassination Classroom’ Season 2 are available on Funimation and also on Netflix.