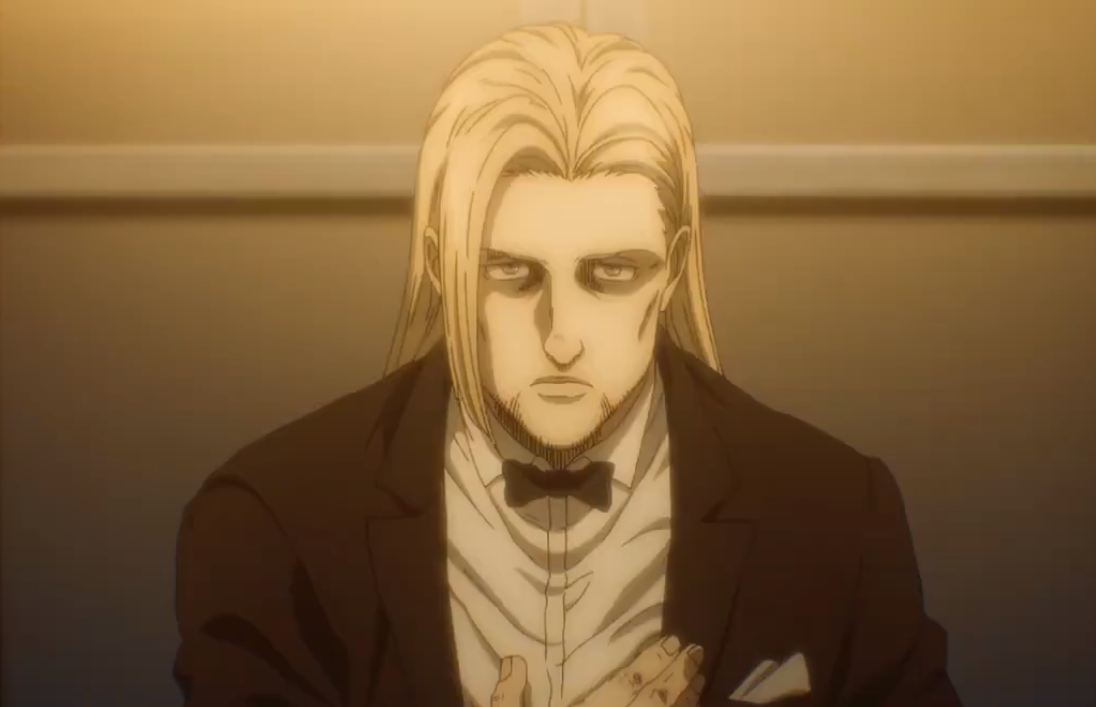 The final season of ‘Attack on Titan’ continues to showcase a great deal of insight about the Titans, the Eldians, the Marleyans, and their interconnected history. We also see the once naive and ideal Eren come into his own and understand the bigger picture. Episode 5 answers some unanswered questions while posing some more debilitating queries. So, without further ado, let’s get right into it, shall we? SPOILERS AHEAD.

As Tybur prepares to go on stage, Reiner and Eren get to talking. Although Falco wants to leave, both Eren and Reiner encourage him to stay. In the audience, Annie’s father and Reiner’s mother talk about the sacrifices of their children, and the former believes that his daughter is still alive today. As the ceremony starts, a soldier summons the younglings, stating that Commander Magath has asked for them.

Tybur finally commences his speech and talks about how 100 years ago, the Eldians used to rule with the power of the titans. He then discusses the story of Helos and how the hero beat the “villainous” King Fritz to secure peace. Following this fight, the king went to Paradis Island, where many titans were housed. In the meantime, a soldier leads Pieck and Porco to a room, where they are thrown into a hole so that they cannot unleash their powers.

As Tybur discusses their history, Eren and Reiner talk about the motivations behind their actions and the events that transpired a few years ago. Eventually, Tybur reveals that the truth is different than the commonly accepted narrative. After all, it was King Fritz who secured the peace in the region and Helos is just a fabrication. Fritz vowed to renounce war, which is why this ideology has been passed down through his bloodline.

Towards the end of his speech, Tybur dictates that since Eren (who currently possesses the Founding Titan) is not of royal blood, he is not obligated to follow King Fritz’s vision either. Consequently, Tybur labels Eren as a “threat to peace” and highlights how dangerous the protagonist can be. In the basement, Eren and Reiner continue their discussion and talk about the day that Reiner and his comrades struck the wall down. Reiner states that his mission was to retake the Founding Titan and save the world. 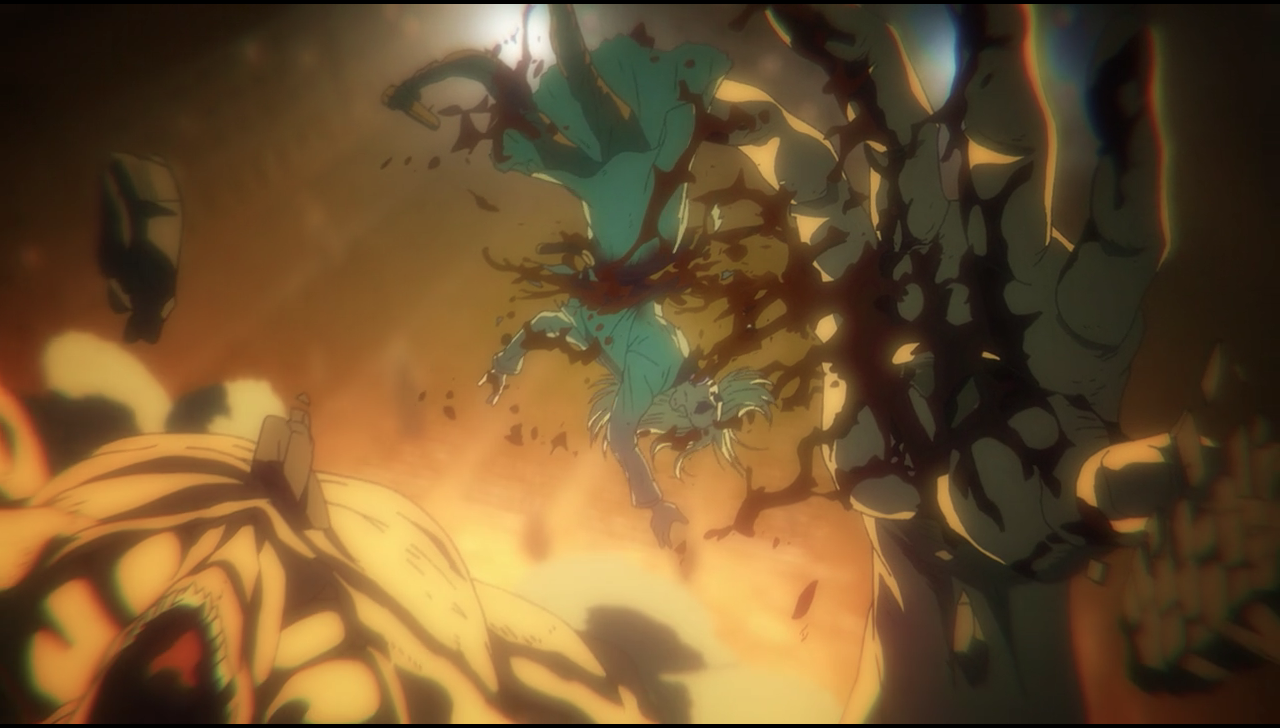 Eren proclaims that he, too, is the same as Reiner and absolves the Marleyan of any guilt. However, Reiner states that he had a choice— he chose to continue after Marcel’s death because he wanted to be seen as a hero and made Bertolt and Annie march on. It is clear that the guilt of his actions still weighs heavily on Reiner as he asks Eren to kill him. Upstairs, the audience is moved by Tybur’s speech and applauds him as he declares war. Just then, Eren turns into a titan and moves to eat Tybur. This naturally begs the question— is Willy dead?

In the last scene, we see that Tybur is simply surrounded by blood and that Eren is ready to eat him. Hence, it does seem as though Tybur has perished. Firstly, he has no way to protect himself from Eren’s clutches now, but we will make our case with relevant scenes from both the anime and the manga. First and foremost, it is because of the manga that we know that Willy Tybur dies and that he already anticipated this before he stepped onto the stage. Tybur accepted his fate, and apparently, this is the price he had to pay to declare war on Paradis Island.

Plus, Magath warms Tybur about the security risks, but the latter still goes ahead with his plan. In the anime, there is a scene where Willy looks over to his family backstage and thinks that revealing the truth is his atonement. Although death is a recurring element in the anime, not many people get to contemplate how they’d atone for their lives, sins, and lies. So clearly, Tybur has made his peace with what’s about to happen, and a part of him could even deem it necessary for the cause. 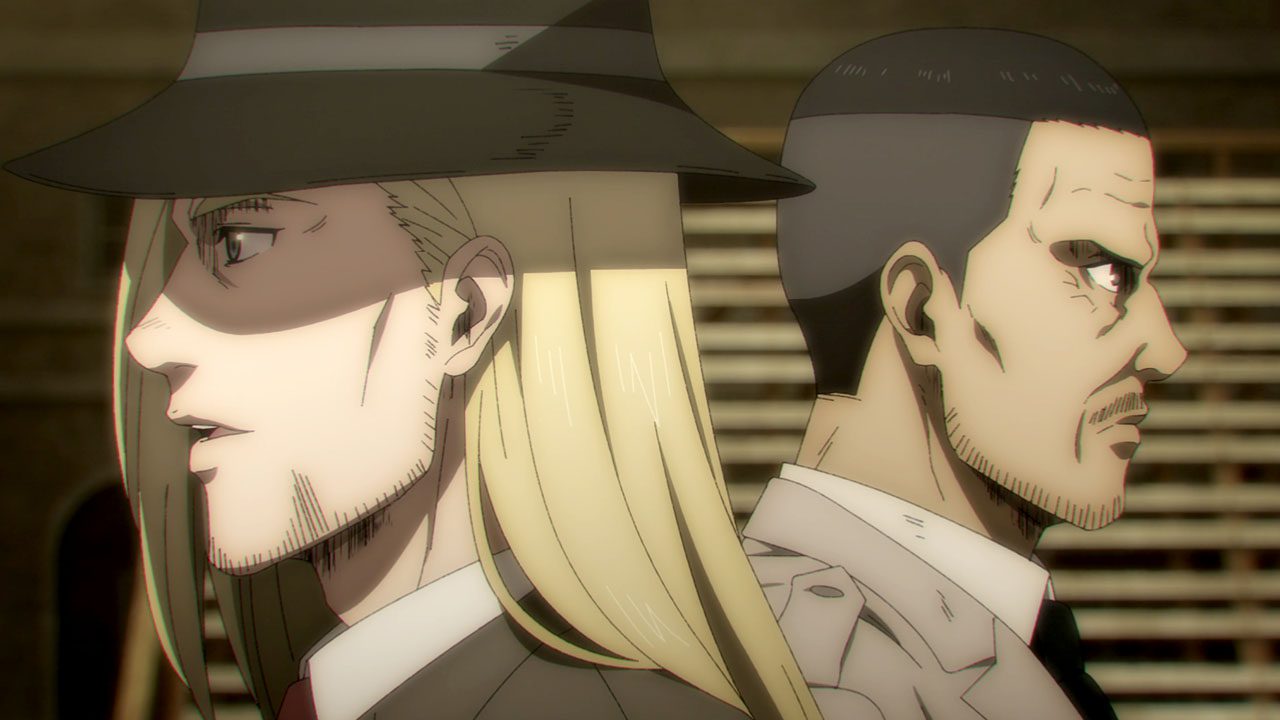 In the end, when Eren changes into a titan and seemingly devours Tybur, it makes for a gripping scene. But why does Eren do so? Well, it is evident that the protagonist thinks that Tybur is the War Hammer Titan and that by consuming him, Eren will get those powers as well. However, if you’re familiar with the manga, you know that this is not the case. Although we don’t want to provide any more spoilers, we will say one thing— it seems as though the battle has only just begun.