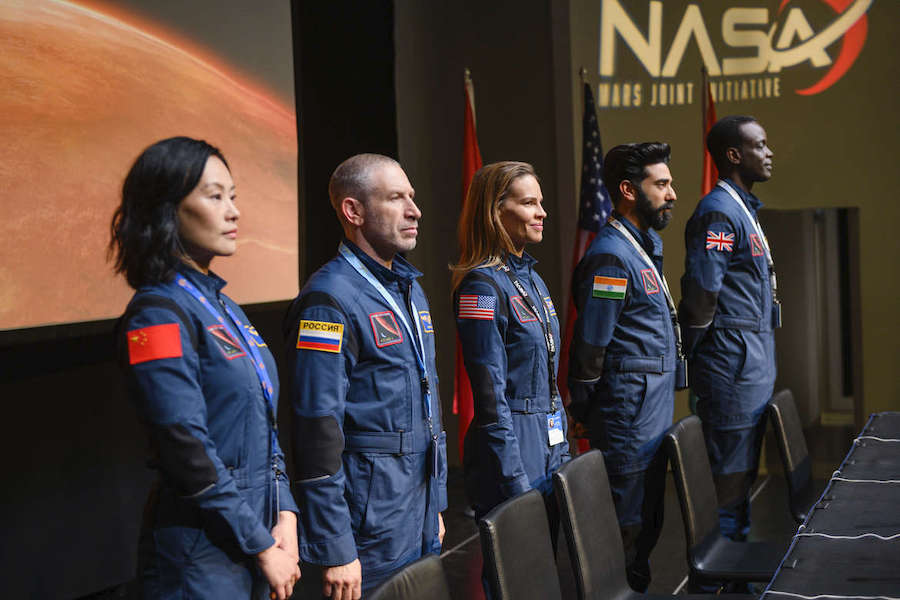 With its second episode, ‘Away’ begins the journey of its protagonists ahead of Moon, following which they are cut off from any help from Earth and have to completely rely on each other to get through the situation. Picking up from the previous episode, it continues to create a lingering doubt around the situation of Emma, where she has to deal with the things going at home and not let that affect her leadership on the ship. While it proves to be challenging, especially with Misha and Lu having already made up their minds about her, she gets a chance to prove her mettle when a new crisis emerges.

On its way to Mars, the ship has to face another problem when one of its solar panels is not deployed properly. It is a life or death kind of situation for the crew, and to fix that, two team members will have to go out and face a worse life or death scenario. Back on Earth, Matt recovers after his surgery at the hospital and Lexi feels the weight of both her parents’ sudden absence in her life. She finds some comfort with Melissa, Emma’s friend, and crew support. It is also revealed that Misha doesn’t have a good relationship with his daughter and that Lu might be in love with someone at Mission Control.

After setting the grounds of the story in its first episode, ‘Away’ continues on its mission, carrying the tension and drama from the previous chapter, and imbuing thrill in the new one. The episode focuses on the enormity of space and the strained relationships between the crew members to pull off an edge of the seat moment for the series.

When all solar panels of the ship are not properly deployed, Emma and Misha are forced to go out and solve the problem manually. In the previous episode, we had come to know that Misha is not too keen at following Emma’s authority, whom he finds unfit for leadership. He, along with Lu, is openly hostile to her, and such behavior doesn’t convince us that he will bother to have her back when trouble arises. It is this distrust between them plays off in the spacewalk, where Emma takes a leap of faith, and we wonder if she will be rewarded for it or if she’ll simply drift away into the endless space because no one caught her.

In these scenes, the show takes us back to ‘Gravity’. While it doesn’t quite play as intensely with the themes of stark isolation of space, it does remind you of the unsettling feelings you had to deal with while watching Sandra Bullock drift away into space in the lack of tethers. Your heart skips a beat in the moments where you realize that Emma is going to have to do something similar and this thrill is what keeps you excited about finding out how the mission will turn out eventually.

The episode also opens up into the personal lives of other crew members. Apart from Emma, it focuses on Misha, whose character gains immense depth with the addition of the backstory. We see him as more than just a dissenter of authority on the ship and this also makes us easier to understand his point of view and maybe even start to empathize with him in the process. The episode also makes us care about Emma’s daughter, Lexi, who has to deal with the thought of almost losing both her parents. Her mother is on a journey where every day comes with new challenges and where one misstep could lead to her death. Her father, on the other hand, is now bedridden due to a stroke, which she finds out is a genetic thing. Staying in her empty house is too much for her to handle, and her loneliness resonates differently.

Another interesting thing that the show touches upon is the religion factor, though in a minor way. Ado Essandoh’s character, Kwesi, is a devout Jew, who says prayers for his teammates before they walk out into space. He has brought the Torah with him to space and his faith becomes an important factor for him to survive its mental ordeals. To weave in such detail into his character is interesting, considering that in the sci-fi shows set in the far or near future, God and faith are often absent from the equation. It also underlines the importance of a balance that faith and science can achieve, without one trying to belittle or disregard or disprove the other. There are people who walk that line and show us that it doesn’t have to be a constant battle of choosing one over the other, but a harmony of both that helps you through tough times.