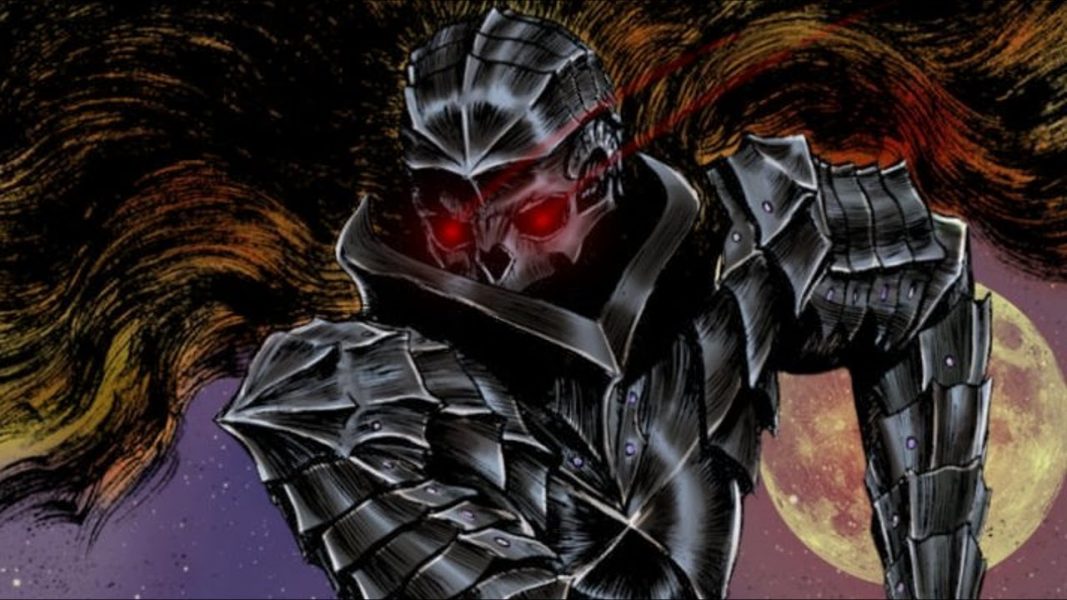 Berserk (also known as Beruseruku in Japanese) is a dark fantasy anime television series which is based on a manga series of the same name. Written and illustrated by Kentarou Miura, the manga series was first published on April 25, 1989, and has been running ever since. In 1997, the manga series was adapted into an anime television series, and covered the Conviction story arc from the manga. More than a decade later, between 2012 and 2013, the Gold Age story arc from the manga was adapted into an anime film trilogy.

The first part, titled Berserk: Ougon Jidai-hen I – Haou no Tamago, was released on February 4, 2012, and it was followed by the releases of Berserk: Ougon Jidai-hen II – Doldrey Kouryaku and Berserk: Ougon Jidai-hen III – Kourin on June 23, 2012 and February 1, 2013, respectively. A few years later, it was announced that a new anime television series, covering events after the Gold Age story arc, would be made, and Season 1 of Berserk subsequently premiered on July 1, 2016. Although some criticized the show for its animation style, it still struck a chord among fans of the franchise and was renewed for Season 2, which premiered on April 7, 2017. Since then, fans of the show have been waiting to hear news on a third season, and here’s everything we know about Season 3 thus far.

Berserk Season 3 Release Date: When will it premiere?

Berserk season 2 premiered on April 7, 2017 and ran till June 23, 2017. The season ended on a note which hinted at the possibility of a third season, and unsurprisingly, fans have been eagerly waiting to hear news on Season 3 of the show.

However, as it stands, Season 3 has not been confirmed yet, and it remains to be seen whether another season will be made at all. That being said, there’s no reason to panic just yet – anime shows are sometimes renewed after a few years, and hence, there’s plenty of time left for a renewal to be announced. Our best guess is that Berserk season 3 release date could fall sometime in 2021. We’re keeping our ears open for news on Berserk season 3, and we’ll update this section as soon as we hear more.

If you like watching anime shows in English, the good news is that Berserk has a good English dub done by talented voice actors. If you want to watch the show in English, you can find dubbed episodes on websites like Funimation, Crunchyroll, and AnimeLab.

Berserk is set in a fictional place called the Kingdom of Midland and follows the exploits of a mercenary named Guts who wanders the land looking for fights. A man of war, Guts carries a sword which is larger than himself, and despite odds never being in his favour, he manages to win against any opponent.

One day, Guts’ fighting prowess catches the eye of Griffith, who is the mysterious leader of a group of mercenaries known as the Band of the Hawk. Impressed by Guts, Griffith offers Guts a chance to join the group, but Guts refuses and instead challenges Griffith to a duel. Undaunted, Griffith accepts the challenge and ends up defeating Guts, thereby forcing him to join the group. Now, as part of the Band of the Hawk, Guts has to join Griffith and other mercenaries in settling a war against the Empire of Chuder, but unbeknownst to anyone else, Griffith seems to have an agenda of his own.

When the Band of the Hawk finally achieves the task, Guts decides to leave to pursue his own dreams, despite Griffith’s attempts to make him stay. When Guts rejoins the group years later, he finds that its strength has dwindled, and that the group is now hunted across Midland for an act of treason committed by Griffith, who has been imprisoned ever since. When the mercenaries finally manage to free Griffith from captivity using Guts’ help, they find that Griffith has completely changed while in prison. With Griffith having become a shadow of his former self, the Band of the Hawk must strive to regain their fame in Midland. However, their struggle to regain their past glory ends in a sinister fashion.

Branded for death and relentlessly pursued by demons, Guts then has to struggle to try and change his own fate. This, however, proves to be far from easy, but Guts finds help along the way in the form of some unlikely allies. As the show progresses, Midland progressively descends into chaos as demons appear and cause mayhem across the land. Meanwhile, years of constant fighting starts to show on Guts, and his resolve to alter his fate ultimately culminates in the search for a mystical land called Elfhelm, where demons cannot tread.

Through the three movies and the two seasons of the show, Berserk has had dozens of characters. However, in the show, there are only four main characters, and below, we’ve provided you with brief backgrounds on them.

Guts: The main protagonist of the show, Guts is a tall, muscular man who wields a massive sword called the Dragonslayer. He also has a prosthetic left arm which hides a mini cannon. Having been a mercenary for years, Guts is a jaded man who prefers conflict to peace, and is always on the lookout for a fight. Although he struggles against fate and causality, Guts never quite manages to alter things on a large scale, which makes him a tragic hero.

Casca: The only female soldier in the original Band of the Hawks, Casca joined the group after Griffith saved her from getting sexually assaulted. A good friend of Guts, Casca is extremely skilled at swordplay and her skills are matched by no one except for Guts and Griffith. Moody and capricious, Casca has an ambivalent relationship with both Guts and Griffith, but is always around in times of need.

Isidro: A runaway-turned-thief, Isidro is a youngster who Guts befriends in the show. With dreams of becoming a great swordsman one day, Isidro joints Guts on his quest to change his fate, hoping to learn from Guts. However, he soon realizes that he does not possess enough strength, but makes up for his shortcomings by using his small size and agility to his advantage. Being a young brat, Isidro also serves as the comic relief in the show.

Puck: Another member of Guts’ ragtag group, Puck is a wind spirit from the mystical land of Elfhelm. While Puck does not boast great prowess in combat, he can secrete a powder from his wings to heal the injured, and can also blind enemies with a dazzling flash of light. Along with Isidro, Puck also serves as comic relief.