12 Best DC Supervillains of All Time 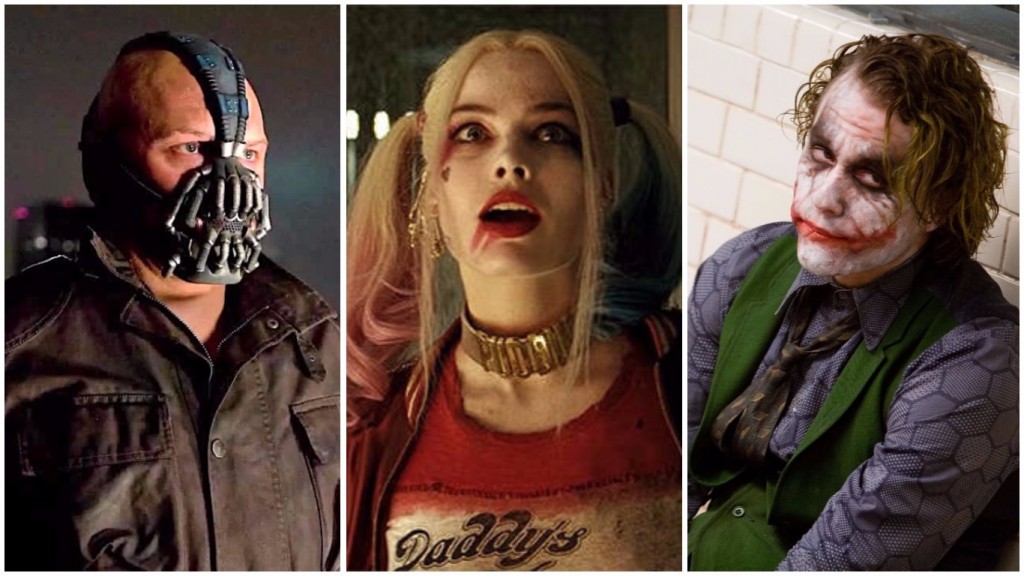 Quite a number of learned men have ventured into understanding the psyche of a villain, and what guides their acts of villainy. “Every villain is the hero of his own story”. Taking this thought forward, the writers and artists at DC have given us such endearing characters that we have come to revere over the ages, the perfect foil to their superhero counterparts.

DC villains, apart from variety, have a sort of duality associated with them, and endearing backstories, pushing our heroes to test the moral constraints they so rigidly follow. Perhaps, this is what makes these villains such formidable forces to reckon with for our ever beleaguered heroes. It’s a shame though that most of DC’s film property centres around Batman and Superman despite the treasure trove of memorable characters they have, but I guess that’s about to change. So, without further ado, here goes a list of the top DC supervillains in live action features, based on their general characterisation and strength of their portrayal. If you haven’t seen these movies, here’s a SPOILER alert. 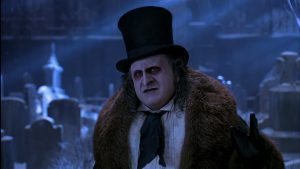 The Penguin is a Gotham city mob boss and arms dealer, sporting a stout physique and beak-like nose, and using specially engineered umbrellas for weapons. Though he may not have always engaged in direct combat with Batman, with him around there is constant trouble brewing for Gotham’s knight with his illegal operations targeted at the criminal underbelly of Gotham city. Penguin has a suggestively troubled past, and was often mocked for his physical appearance. Although, without the mob and his thugs, the Penguin isn’t much the Batman can’t take care of. The character was portrayed menacingly well by Danny DeVito in ‘Batman Returns’ (1992). 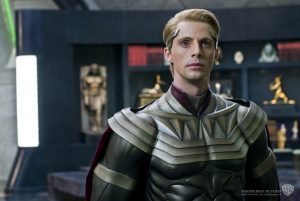 Adrian Veidt, more famously known as Ozymandias, the retired superhero in Zack Snyder’s ‘Watchmen’ (2009), is dubbed ‘the smartest man in the world’ in Alan Moore’s graphic novel. Working as a hidden villain in the film, portrayed by actor Matthew Goode, his plan involved destroying major cities to unify the US and Soviet governments, framing Dr. Manhattan for all the destruction, killing billions in the process. He was also able to one-up both Nite Owl and Rorscach in a battle of wits and brawn. Coupled with his intellect and vast wealth, but owing to dwindling popularity and a dichotomy in his villainous plan that even Dr. Manhattan agreed to, Ozymandias acquires spot #11  on this list. 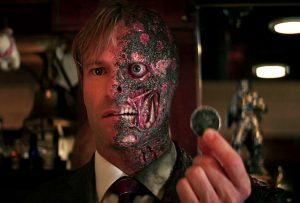 A former Gotham city District Attorney, Harvey Dent took up the persona of Two Face after one half of his face was burnt and irreparably damaged. A recurring member of the Batman rogues gallery, and one of Batman’s most formidable foes, he is infamous for making all his decisions (often involving the lives of his victims) by the flip of his coin, letting the element of chance decide the outcome. Portrayed onscreen by Aaron Eckhart in ‘The Dark Knight’ (2008) and by Tommy Lee Jones in Batman Forever (1995), this one’s place in this list is no mere chance. 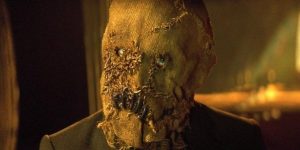 A psychologist who adopts his alter ego, the Scarecrow, and uses his fear inducing concoctions to pry on the minds of his victims, Dr. Jonathan Crane has been one of the most enduring villains of Batman’s Gothamverse and a recurring member of Batman’s rogues gallery. He has used his fear toxin on Batman multiple times, to potentially lethal effect, and posed citywide threats as part of his sinister desire to pry on phobias. Played by Cillian Murphy in Nolan’s ‘The Dark Knight’ trilogy, The Scarecrow ranks as #9 on the list of the most formidable onscreen DC villains. He’d rank much higher though if his menace from the Batman ‘Arkham’ videogames could somehow be translated onscreen, though this version is more inkeeping with the sober tone of Nolan’s trilogy.

Genetically engineered on Krypton as “the ultimate killing machine”, he proves to be exactly that. Doomsday, “the Kryptonian deformity, hateful to sight and memory” made his cinematic debut in ‘Batman V Superman: Dawn of Justice’ (2016) as a CGI mass metamorphosed from Zod’s dead body from the end of ‘Man of Steel’, although there was little resemblance to his comic book counterpart. “The death of Superman” is one of the most iconic Superman story arcs of all time; though it may appear to have been shoehorned in BvS’s third act, the wanton destruction caused by Doomsday and his subsequent killing of our beloved superhero makes him a formidable foe for the man of steel. 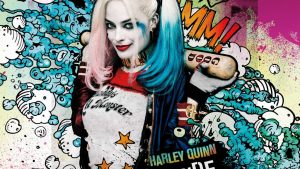 The only female entry on our list, and rightfully so. Dr. Harleen Quinzel worked at Arkham Asylum as a psychologist, assigned to the Joker himself. As it turned out, the Joker drove her to dementia, while she fell in love with him, becoming his accomplice and periodic love interest, second only to him in terms of downright craziness. Armed with a bat, a mallet and a pistol, she has crossed paths with the Bat on several occasions. The character made her live action debut in ‘Suicide Squad’ (2016), by Margot Robbie. Needless to say, Robbie nailed the role and instantly became a fan favourite. Her appearance with the Joker in the jester costume was a moment to behold for fans of the animated series. 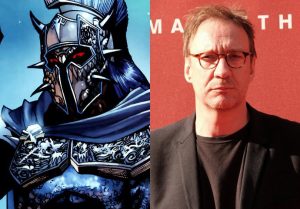 The Greek god of war himself, Ares, made his live action debut in this year’s ‘Wonder Woman’. An archenemy of Wonder Woman (and her sibling), Ares propagates perpetual war. Working mainly though, as a behind-the-scenes villain in the film, he poisoned the hearts of men and corrupted them to fight each other. However, the big reveal towards the climax of the movie works largely in the favour of the movie, and the climactic fight between him and Wonder Woman alone is bang for your buck, and worthy of earning him a spot on this list. Having an actor like David Thewlis play Ares, diminished any chances of the character coming off as one dimensional or contrived, in an otherwise CGI heavy conclusion to the film.

One of the foremost adversaries of Batman, and the leader of the League of Assassins (renamed the League of Shadows in the film adaptation) that also trained Batman, Ra’s Al Ghul was played by Liam Neeson in ‘Batman Begins’ (2005). He is the intellectual and physical equal of Batman, having been dead and resurrected multiple times in the famed Lazarus Pit (yet to make an appearance on film), and also the father of Talia Al Ghul, another Batman villain. Ra’s Al Ghul translates from Arabic as “demon’s head”, and given his mastery in hand-to-hand combat, and his ingenious plan to diffuse the fear toxin in Gotham’s air to “restore balance to the world” in Begins, I’d say he more than earns that name, and this spot. 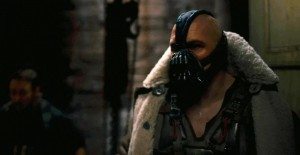 He is perhaps Batman’s toughest adversary on physical grounds (barring the likes of Superman), infamous for “Breaking the Bat”. Peak physical strength and intellect, often coupled with the use of the steroid venom, have enabled him to trump Batman on more occasions than one. In one of the most popular Batman story arcs, ‘Knightfall’, Bane brutally beats up the dark knight, and breaks his back, leaving him disabled and making him give up his mantle for a long time. Incorporating a version of the same storyline in ‘The Dark Knight Rises’ (2012), Tom Hardy plays the menacing Bane to great effect, earning him the no. 4 spot on our list. 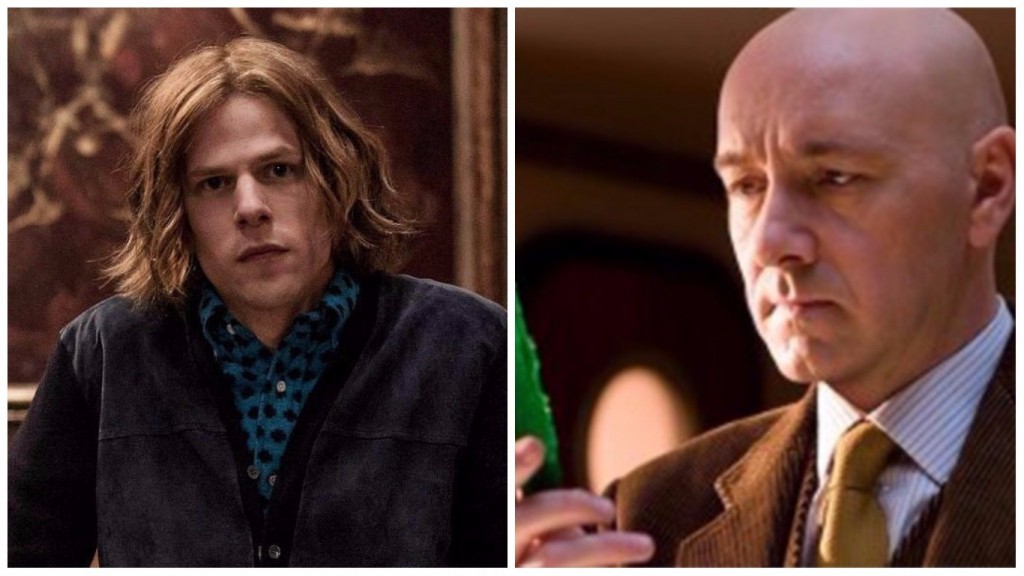 Genius, Billionaire, Philanthropist, Not a Playboy. Widely considered to be Superman’s archenemy despite being a mortal, his power mainly stems from his genius level intellect, technical prowess and his knowledge of Superman’s weakness when exposed to Kryptonite. Believing Superman to be a threat and an alien, his general contempt for the human race is overcome only by his hatred and will to defeat Superman, often posing lethal threats to the son of Krypton, working under the guise of his corporation, Lexcorp. The character has been portrayed on screen to varying degrees of success, by Gene Hackman in ‘Superman’ (1978), Kevin Spacey in ‘Superman Returns’ (2006) and in a more recent, divisive take on the character in ‘Batman V Superman: Dawn of Justice’ (2016). 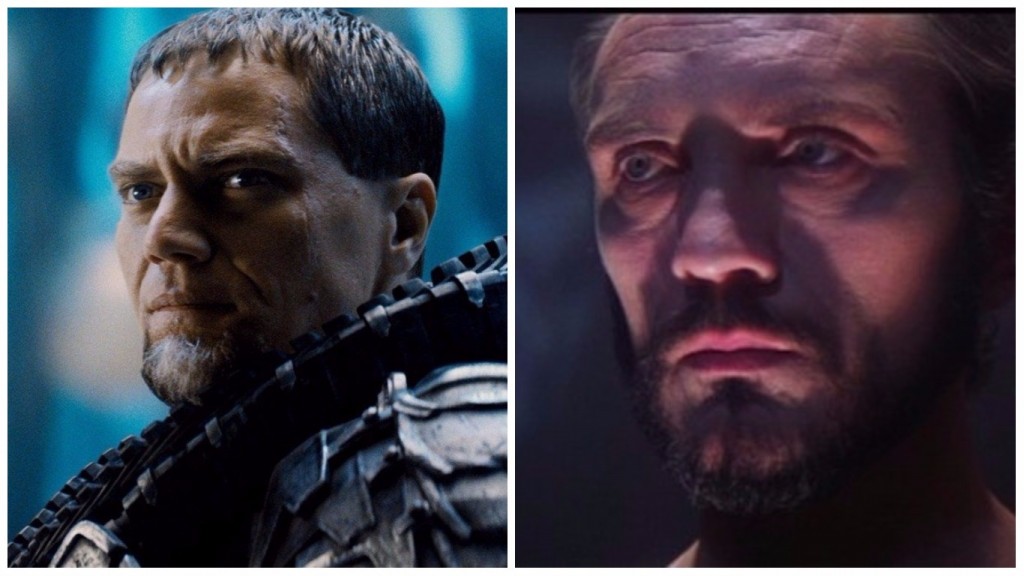 The fuming Michael Shannon brought in a whole new dimension to Zod, with his take on the military commander of Krypton in ‘Man of Steel’ (2013). Possessing virtually the same powers as Superman, albeit not to the same extent (by virtue of not being exposed to Earth’s yellow sun for as long as Kal-El), he has proved a worthy competitor to Superman along with his loyal comrades. While Terence Stamp portrayed the megalomaniacal and authoritarian aspects of the character perfectly, constantly mouthing the now iconic dialogue from ‘Superman II’ (1980), “Kneel before Zod!”, Shannon’s Zod had the clear objective of Krypton living again, and his people’s interests at heart. He was ruthless in his battle with the man of steel, leveling entire city blocks in the process. Too bad he had his neck snapped by Superman in the end. 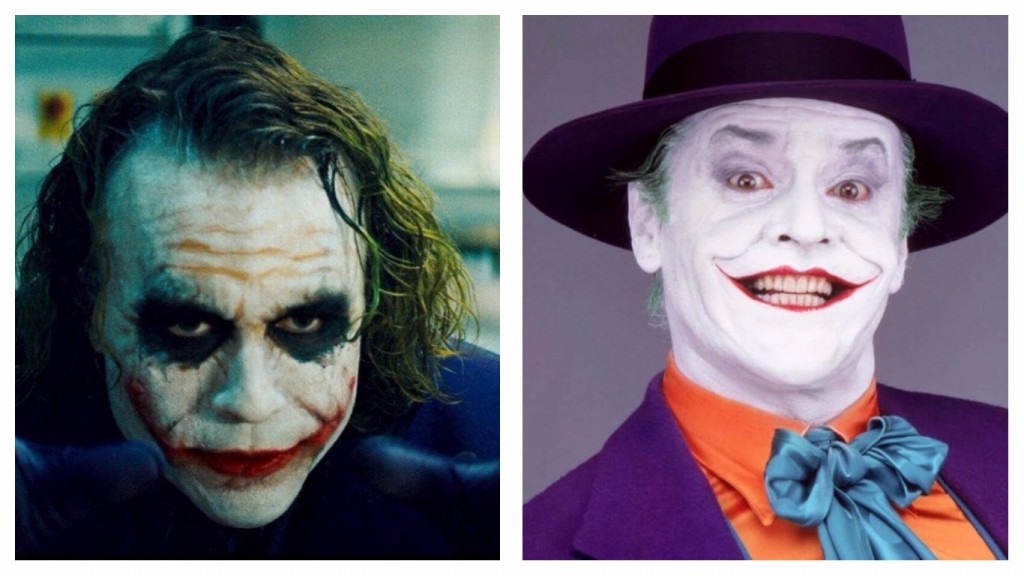 If you happened to read this list expecting a name other than the clown prince of crime himself at the top spot, perhaps you opened the wrong link. Brought to life by Jack Nicholson in ‘Batman’ in 1989, and immortalised by Heath Ledger’s sensational performance in ‘The Dark Knight’ (2008), The Joker is the perfect adversary to the caped crusader of Gotham. His antics, advocacy for a society without rules, penchant for chaos, and pushing the dark knight over the edge, every time, just to prove a point, is testament enough to him being the exact antithesis to Batman, the perfect adversary. The Clown works to demolish everything that The Bat built or stands for, and sometimes, just for a good laugh. Having no superpowers and being no match to Batman in terms of physicality, The Joker remains his toughest adversary yet, challenging him in a way no other character on this list could.

Someone once told me, that for Batman and other characters part of his lore, their greatest power is their writer’s pen, and I couldn’t agree more. How else do you explain a man dressed as a clown, armed with “a few drums of gas and a couple of bullets” to top a list including demigods and aliens? 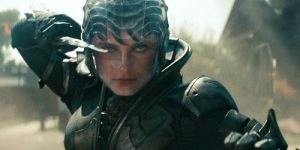 SPECIAL MENTION: Shoutout to Faora Ul, played by Antje Traue in ‘Man of Steel’ (2013) for being an outright badass, and handing Superman some, without a twitch in the eye. Oh, that villainous smirk!