12 Best and Funniest Friends Episodes Ever 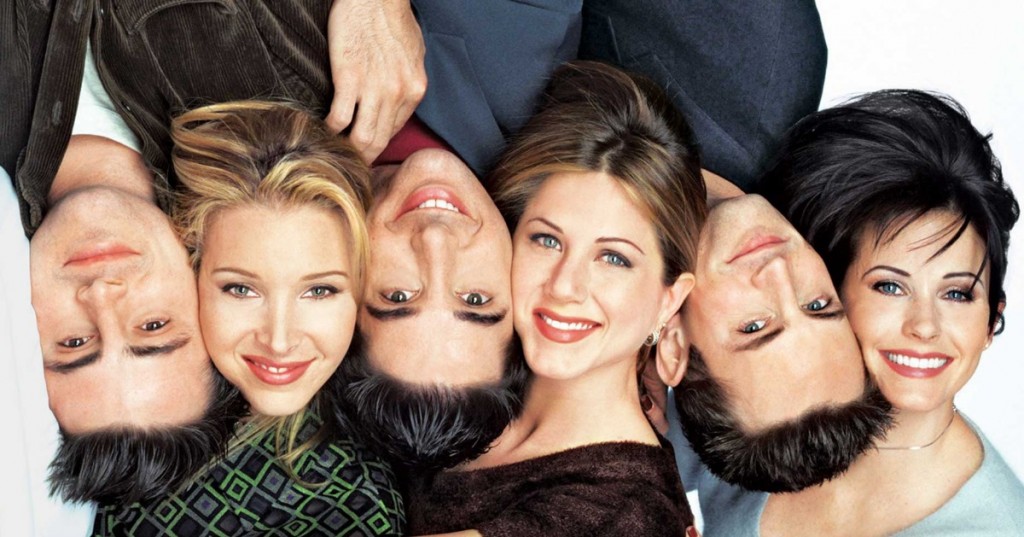 Once, in Manhattan, 5 friends were lounging in a coffee house discussing Chandler’s weird dream, Ross’ failed marriage and a bit of everything in between, when a girl in a wedding dress barged in, and their lives changed, and so did ours. We saw them laugh, cry, fight, grow and love. Even more than 20 years later, they are there for us as they have been for each other, maybe because their relatability to our lives barely seems to wane, or maybe because the show is an alluring vista of a time gone by. Still one of the most watched shows on TV and Netflix, ‘Friends’ is a pop culture phenomenon. Love it or hate it, you sure as hell have watched it. Over its 236 episodes spanning a decade, the show rode high on its cast’s winning chemistry and its creation of a dreamy, yet somehow achievable utopia, where being with your friends somehow made up for a life stuck in second gear.

I’m one of those fanboys who’ve watched every episode half a dozen times, and still find themselves returning for a random quick peek once in a while. Selecting just 12 episodes which trump all else in humour, thus, is a herculean feat. But here they are, the list of funniest and best Friends episodes (In my humble opinion, so don’t unleash your wrath on me ‘Friends’ snobs!) 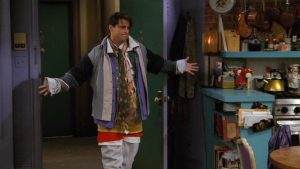 One of the beauties of ‘Friends’ is the way the show used simple, even rundown tropes and still managed to elicit quality laughter. The premise of this episode is simple – Ross has a speech at a black-tie event for which the gang has to leave in 26 minutes, but no one is ready. Rachel can’t decide what to wear, Monica is hung up over a message from her ex, Chandler and Joey fight over the comfiest chair in the room which ruins the dress of Phoebe, the only person who did get ready! The entire episode is bottled up inside a single room, thus elevating all the proceedings. Joey and Chandler’s infantile banter for the chair (and then its ‘essence’) is the highlight though! Best Quote: Chandler: Donald Duck never wears pants. But when he gets out of the shower he ties a towel around his waist. I mean, what is up with that? 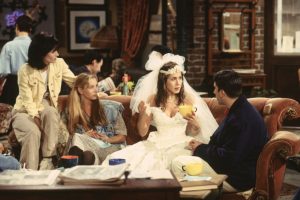 Yes, the very first one, and in my opinion the most underrated episode of the series. The beauty of this episode is that it makes you feel like you’ve known Ross, Monica, Phoebe, Chandler and Joey for ages, and Rachel is the newbie you’re meeting for the first time too. The pilot of the series shows off all the quirks and whims which the characters would soon make their own.  It is a lighthearted caper (much like the entire first season), featuring friends, old and new, just having a good time, while also setting the all-important Ross-Rachel storyline in motion. Once you’ve watched ‘The Last One’, this one feels like a fond memory. A reminder of how how far the friends have come. 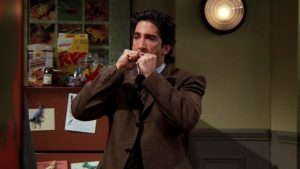 The first half of Season 5 saw most of its laughs originating from Chandler and Monica vying to keep their relationship under wraps and Ross trying to deal with his broken marriage. The latter arc reaches its peak in this episode, where Ross loses it over someone eating the only good thing in his life – his Thanksgiving sandwich. On the other hand, a bunch of sloppy moves from Chandler (like leaving undies on couches and video cams and naked pictures in the open) and Monica raise the suspicion of the others, on which they promptly throw poor Joey under the bus. This episode is a constant barrage of one-liners, chuck-full with some of the most quotable lines from the show. 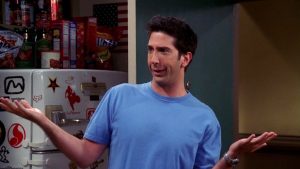 David Schwimmer as Ross has always aced at physical comedy throughout the run of ‘Friends’ (remember ‘Pivot’), but he is in full form as a bumbling, drunk idiot in this episode, where he is trying his best to show that he is’fiiiiiine’ with Joey and Rachel being together. He does make his peace with the situation by the end (at the expense of charred hands), showing one of many instances where in the series where Ross values friendship more than love. Monica and Chandler meeting another couple to know more about adoption and Phoebe and Frank Jr. discussing which triplet he’d be ready to give up are hilarious subplots on their own, but this episode shall forever be memorable for Ross forgetting to wear oven mits… twice! 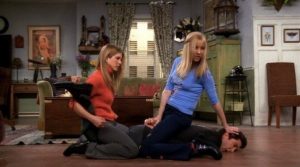 Phoebe and Rachel are taking self-defense classes, but they’re berated by Ross for not possessing something he calls ‘Unagi’, a state of total awareness (which is actually a freshwater eel sushi!). What follows is a bid to out-scare each other. Needless to say, the girls (and even two strangers who Ross mistakes to be them) kick Ross’ butt. Monica and Chandler decide to make each other gifts for Valentine’s. Both of them forget to, and Monica admits it, but Chandler, enjoying the pampering he gets for his ‘not self-made’ gift (a mixtape made by his annoying ex Janice), doesn’t. And Joey’s genius idea to hire an actor named Carl to play his twin for a study paying $2000 backfires, mostly because of Carl’s acting. This is one of those episodes in which each one of the subplots is equally zany. 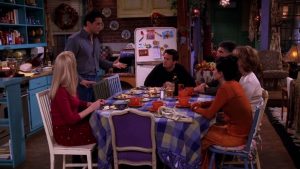 It’s another Thanksgiving. This time around Ross and Joey want to ditch the others to go to party thrown by Joey’s hot roomie and her hot dancer friends, and Rachel makes dessert for the first time in her life, leading to a disaster of a dish which no one but Joey can stomach. Chandler is out to impress Monica’s parents so that he can he can tell them about moving in with her, but it turns out her parents don’t like him because of a dubious lie told by Ross while in college. And on top of everything else, Phoebe is having naughty dreams about Monica and Ross’ father Jack! All this leads to an overload of information to the clueless parents by the end of the episode, setting up a side-splitting climax. 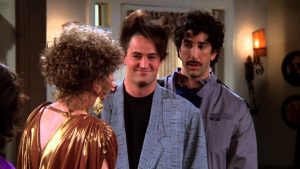 Yet another Thanksgiving episode, and this one is the best of them all, as it comes with the always-so-chucklesome flashbacks. As the gang is lying satisfied after Monica’s usual sumptuous feast, the discussion ranges from thongs to worst Thanksgivings, and after Chandler and Phoebe have told stories about their childhood and past life respectively, we linger on to Monica’s worst Thanksgivings. As we travel back to Thanksgivings from 1987 (featuring fat Monica and pre-nose job Rach) and 1988 (where thin Monica severs Chandler’s toe), we get a bunch of insight into the origin of Chandler and Monica’s relationship, and a lot of ridiculous fashion choices and dialogue to go with it. A treat for the fans of arguably the best, and certainly the healthiest relationship on ‘Friends’. 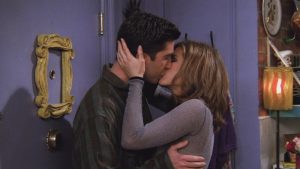 Speaking of flashbacks and insights on relationships, here’s an episode which provides the first insight into the past of three of the gang via a prom video footage. The footage shows Monica and Rachel getting ready for prom, as Ross visibly yearns for Rachel’s attention. When Rach’s date Chip does not show up, Ross’ parents convince him to ask her out instead, but as a tuxedo-clad Ross walks down the stairs, Chip is shown to have arrived and the girls leave, unaware of Ross’ valour. As Rach embraces Ross, an ecstatic Phoebe exclaims, as she has throughout the episode “See! He’s her lobster!” But before all of this action at the end of the episode, this one also features an insanely funny subplot wherein Joey gifts Chandler a golden bracelet with ‘Best Buds’, which Chandler acerbically calls ‘a woman repeller’, irking Joey to no end. A well-rounded mix of past and present. 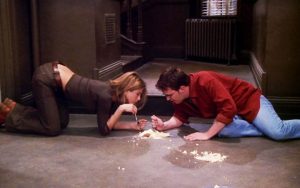 I have always had a soft spot for episodes which focus on the most unexplored of all the relationships in ‘Friends’ – the Rachel-Chandler dynamic. And although Season 4’s ‘TOW The Girl From Poughkeepsie’ is quite the team-up for the duo, it is this underrated gem which gets my pick thanks to their undeniable chemistry as they can’t help drooling over a delicious cheesecake wrongly delivered to their address… twice! Elsewhere, Phoebe tells Joey off when he blows her off for a date, but then is forced to do the same when the love of her life shows up for just one night. Ross and Monica go to a wedding Monica wasn’t invited to, only to find out why she wasn’t. The mix-and-match of all the pairs makes this episode an unconventional treat. 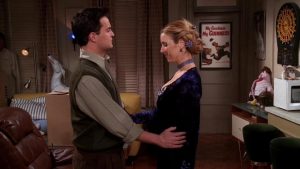 Midway through season 5, a shocked Phoebe watches Chandler and Monica doing it from across the window and tells Rachel, only to find out that she and Joey already know about the two. Instead of asking them to come clean, they decide to have some fun, with Phoebe making passes at Chandler and Rachel giving Monica a bunch of laundry to do when she wants to sneak out under the pretext of “doing laundry”. Chandler and Monica figure out that the others know, but decide to one-up them by continuing with the charade. What follows is an escalating awkward fake date between Chandler and Phoebe, with none refusing to back down. Eventually as they start to kiss, Chandler finally gives in and blurts out his feelings for Monica, making the end as adorable as the entire episode was hilarious. 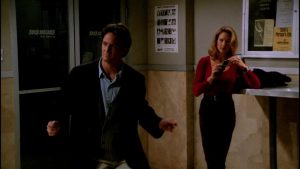 While we felt like we knew them since ‘TOW It All Began’, it is this episode which really makes you feel intimate about the gang, because nothing makes people bond more than personal conversations in dim light, right! ‘TOW The Blackout’ owes most of its magic to the gang, except Chandler, being present in one room, peeping at ugly naked guy, discussing weird sex places, Phoebe singing, Monica being a hostess, Ross trying hopelessly to ask Rachel out and Joey egging him on. Equally droll though, is Chandler, stuck in an ATM vestibule with a VS model Jill, having the most comical conversations – with Joey on the phone, minimally with Jill but mostly with himself. Matthew Perry, who plays Chandler, called this his favourite episode saying “The One With THe Blackout. That’s where we knew we were a part of something special.” And if that isn’t all, this is the episode responsible for coining the term ‘Friendzone’! 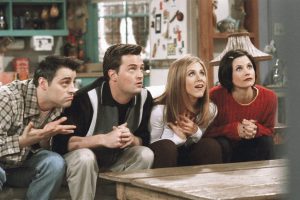 Like so many episodes of ‘Friends’, the name of this one doesn’t quite signify its highlight. Although Phoebe’s visit to the fertility clinic to get embryos implanted into her is funny and touching in equal measure, it is the famous ‘Apartment Quiz’ devised by Ross in which Rachel-Monica square against Chandler-Joey to decide who knows who better, for which this episode grabs the top spot. The quiz uncovers new, unknown bits of information about everyone – from Joey’s imaginary childhood friend to the name of Ross and Monica’s dead granny. The friends played many games over the course of the show (like Football, Poker, ‘Cups’ and ‘Bamboozled’) but the constant competitive trash-talking and nervous energy put into this quiz makes it the most fun to watch, and helps it be crowned atop this list.