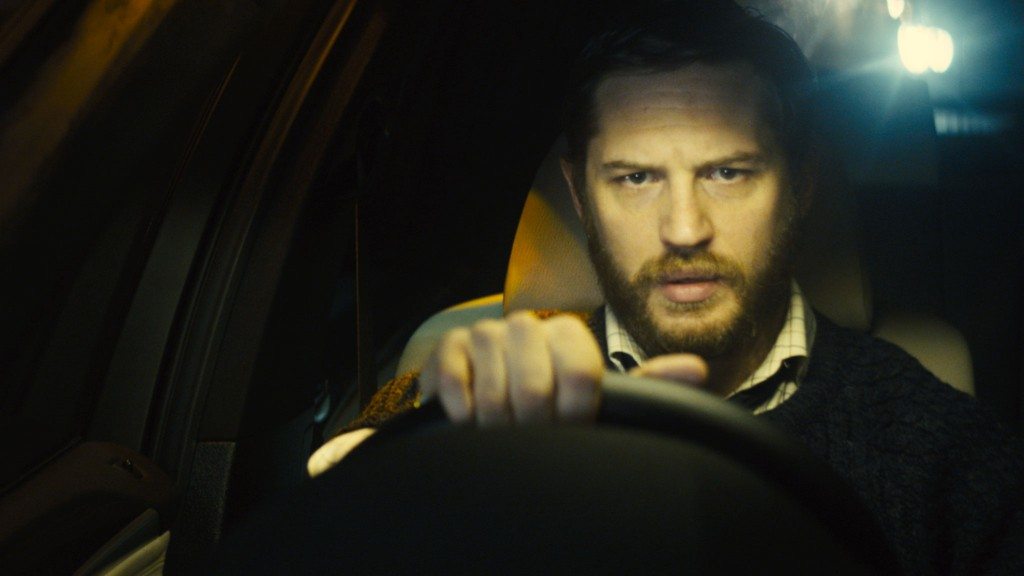 How might your life be better with less? Sometimes less is more, in fact sometimes less is the best there ever could be. Same can be said about the world of cinema. Over the years the world of cinema hasn’t just entertained us, but has enthused us, encouraged us, in fact it has become an integral part of our lives. Occasionally, a director decides to make use of the least number of things at his disposal. Not every such decision pays off but every now and then the art of minimalism works wonders and a true masterpiece is created. A work of art that features minimal characters on screen, doesn’t have top productions or soaring budgets, yet emerges triumphant. With that being said I’ve compiled a list of top movies with two or less characters. There maybe additional characters in very minor roles but all the significant action and dialogue involves two or less characters. Read on and you’ll come to know why sometimes less is the best. 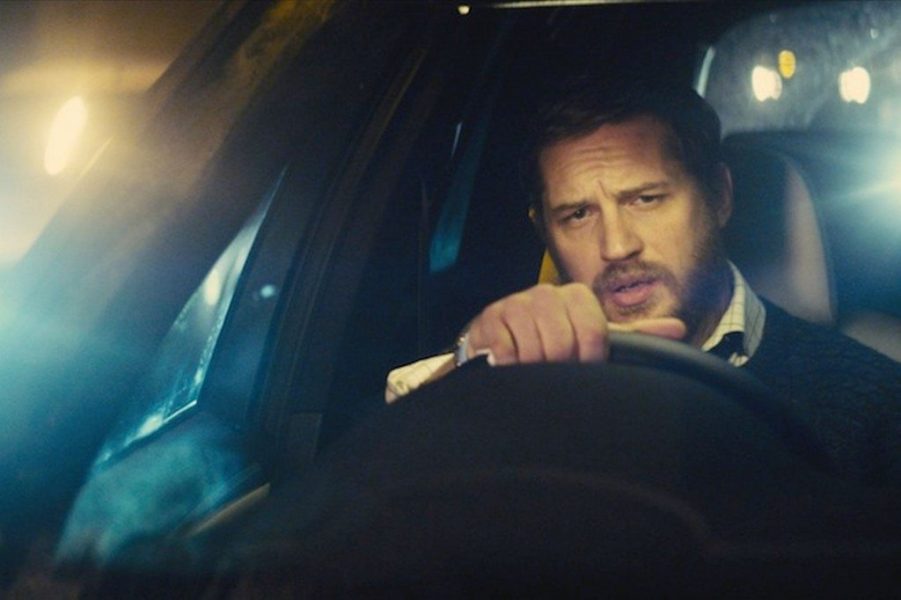 One of the finest and most intriguing movie on the list, ‘Locke’ features Tom Hardy driving a BMW SUV for the entire length of the movie. Directed by Stephen Knight, the movie manages to be something of a character study done through subtle conversations Ivan Locke has on his cellphone as tries to handle multiple calamities which have sprung up in his life. The film presents us with a man who quietly reveals far more about his psyche than he suspects. We only ever see a man in a car, and hear voices over the phone, yet we picture for ourselves so much of the off screen world. Our protagonist, Ivan Locke, tries his best to keep his responsibilities in order, but a sense of guilt undermines his best intentions. Overall, ‘Locke’ is a bold, evocative movie, in which voices, intonations build up a detailed picture of a man’s life, as elegantly as the best radio play. 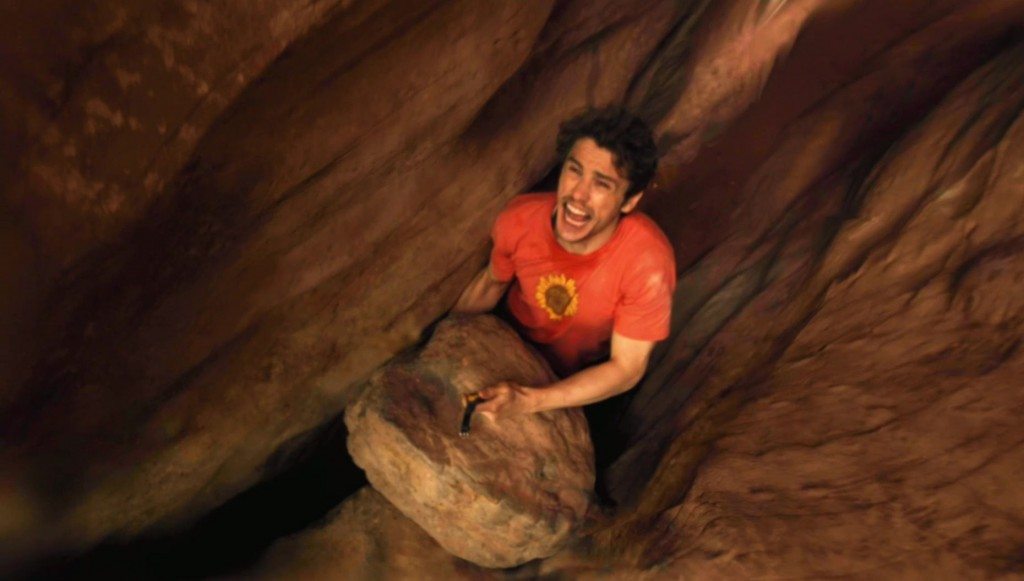 ‘127 Hours’ is gut wrenching and gruesome, but it also tells us that the will to live can make us do things we’d never imagine, not even in our nightmares. It brings together one of Danny Boyle’s most beautifully exuberant directorial efforts and a fantastic performance from James Franco. Shot primarily in one location with one actor ‘127 Hours’ describes the stirring true story of one Aron Ralston, an audacious adventurer, who trusts his skills and enjoys taking chances. One day he decides to go hiking in the wilderness without telling anyone where he is going and then out of nowhere he gets his forearm trapped between a boulder and the canyon wall and gets stuck in a deep, narrow crevice. What follows are 5 dreadful days in which Aron moves heaven and hell to save his life. Does he emerge triumphant? That’s one question I won’t answer as I don’t want to rob you of the shocking climax of this incredible story. All I can say is that Danny Boyle does complete justice to this gruesome yet fascinating true story. 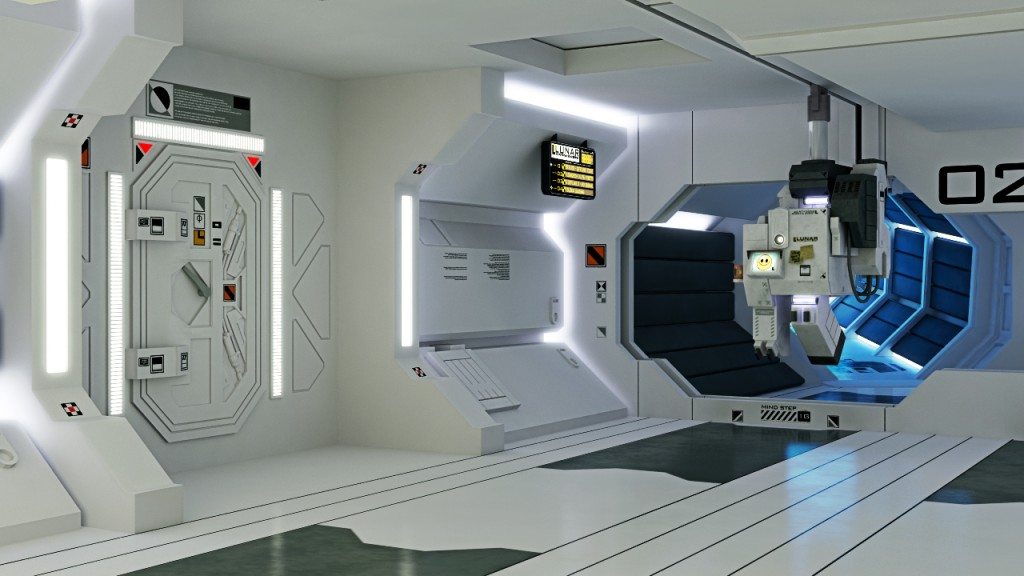 The genre of science-fiction is intriguing, puzzling and full of unsolved mysteries and thus often presents us with works that leave us bewildered beyond repair. Most of the films in this genre showcase state-of-the-art special effects. Yet films like ‘Moon’ prove that there is still space for smaller, more introspective movies that touch intimate stories. Space is a cold and lonely place, pitiless and indifferent, devoid of any consolations. Directed by Duncan Jones and starring Sam Rockwell ‘Moon’ tells us the story of a lonely astronaut on a moon base with his computer as his only companion. The isolation has helped solve a lot of issue for him as he counts the days left before he sets foot on planet earth again. But as his 3 year long stint on the moon is about to end, new complications surface. He starts suffering from strange hallucinations and then meets up with an accident while traversing the moon, an accident that alters the course of the entire movie. Revealing more about the plot of this enticing piece of minimalism would be nothing short of a crime. But moon is a superior example of what the genre of science fiction should be like. It is a movie all about ideas and ideas just like science fiction are utterly mystifying. 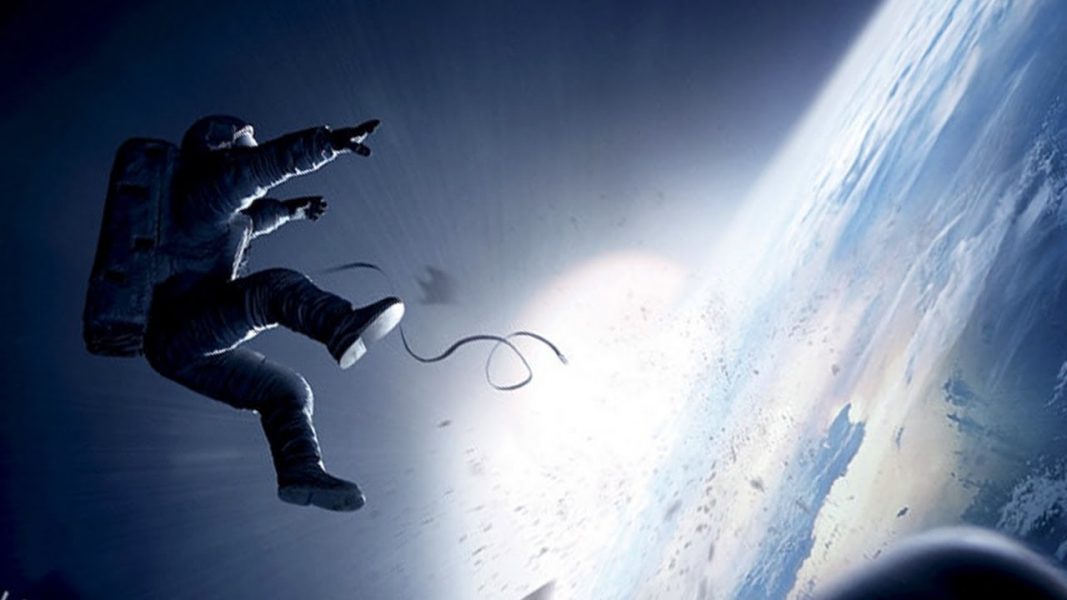 From one minimalistic science fiction masterpiece to another. From the cold and the dark moon to the silent and mysterious depths of space, devoid of many things, the most significant of them being gravity. I remember being rendered completely awe-struck after my first viewing of Alfonso Cuaron’s incredibly enticing and visually mystifying space story ‘Gravity’. Though it has a huge budget but this stunning space adventure largely features only two characters- astronauts Ryan Stone (Sandra Bullock) and Matt Kowalski (George Clooney), who are stranded in outer space after their space station suffered irreparable damage. Cuaron spectacularly manages to create both wonder at his glorious space panoramas and nail-biting tension at what’s transpiring in the foreground. Some would say that ‘Gravity’ is all about special effects, but I beg to differ. It is a movie about what happens to the psyche in the aftermath of a catastrophe. It symbolizes that moment when you suffered hardship that seemed excruciating and believed all hope was lost and that you might as well curl up and die, and then you didn’t. What made you to decide to keep going? It’s a mystery as great as any, a mystery we’ve all wrestled with at some point or the other. 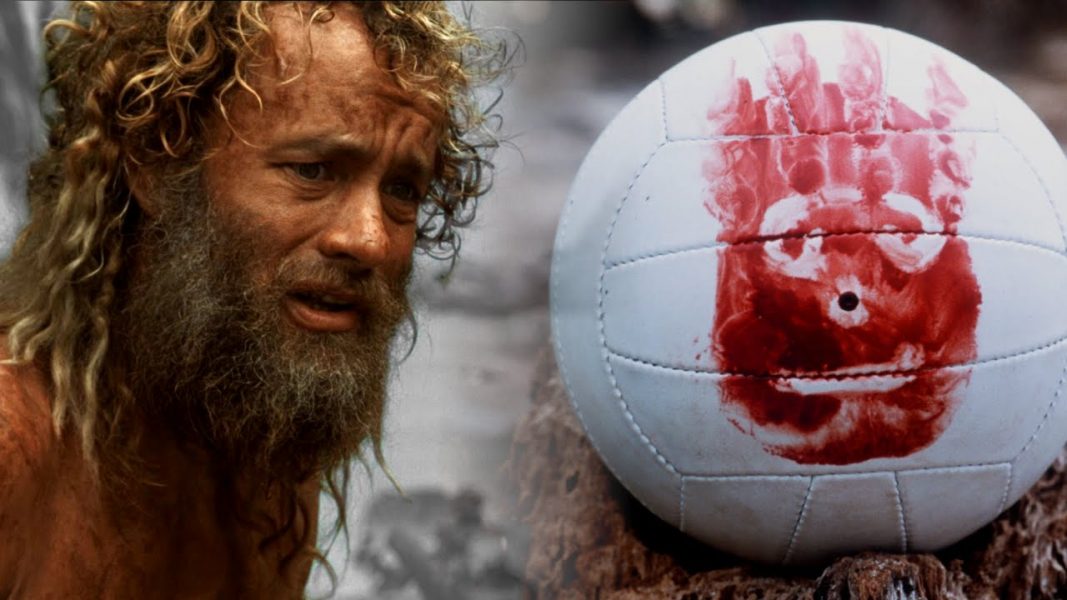 This minimalist movie is a moving exploration of what happens when everything we hold on to is taken away from us. Tom Hanks does a tremendous job in this gripping story of survival, which features only him for most part of the movie. Directed by Robert Zemeckis, ‘Castaway’ possess an intelligent script, wherein, Chuck Nolan(Tom Hanks), a Federal Express Executive, is the lone survivor after a FedEx flight crashes across the pacific. Now Noland must transform himself both physically and emotionally so as to survive on this isolated island. The movie’s power and effect center on the island. He splits coconuts, traps fish, builds fire and makes use of the contents of several FedEx boxes that washed up with him. He even paints a face on a volleyball and names him Wilson. But does he manage to return back home or is left marooned on the island forever? Go and watch Tom Hanks’ yet another captivating and powerful performance and perhaps you’ll find the answer.

5. My Dinner With Andre 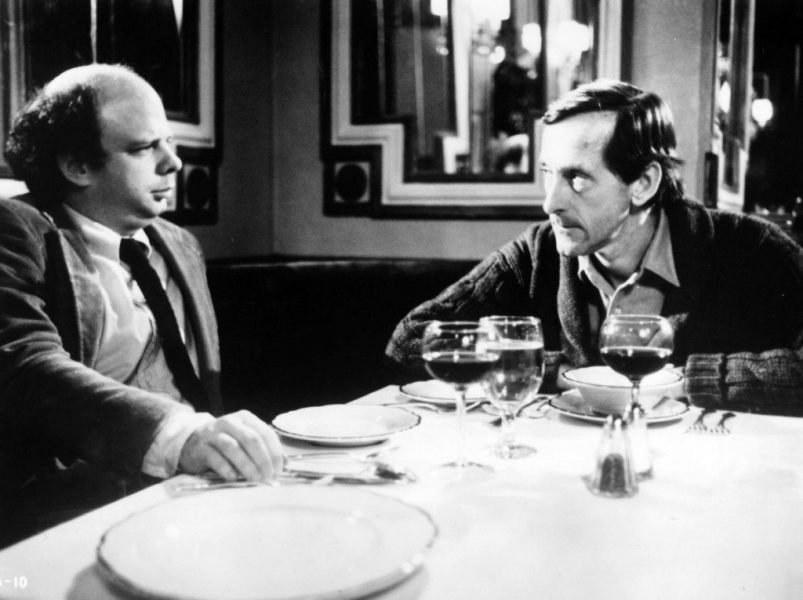 A list about minimalistic movies without ‘My Dinner With Andre’ is just partial. Ever heard of a movie that is exclusively based on a conversation between two characters? Well I didn’t, not until I saw the quintessential talk film. Directed by French filmmaker Louis Malle, ‘My Dinner With Andre’ consists entirely of a conversation between two men in a restaurant. Playwright and actor Wallace Shawn and theater director Andre Gregory wrote and star the film as fictionalized version of themselves having dinner at an upscale Manhattan restaurant to catch up on each other’s lives. They discuss everything from theater to art to perceptions of reality and even the meaning of life. What ‘My Dinner With Andre’ exploits is the well-known ability of the mind to picture a story as it is being told. It is a conversation in which the real subject is the tone, the mood, the energy. A true masterpiece right from the beginning to the end. 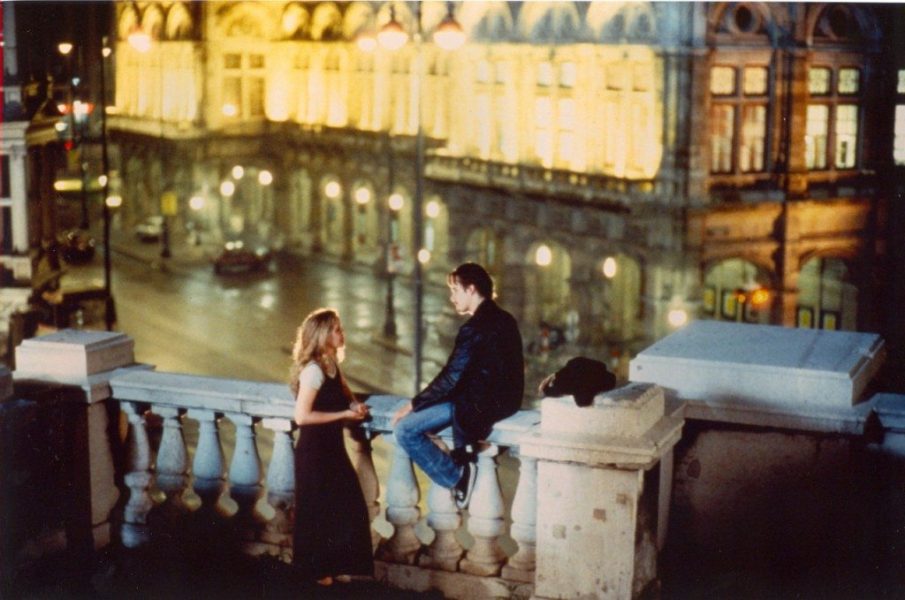 Love is not something which can be expressed in words. It often comes as a complete surprise. Much like ‘My Dinner With Andre’, ‘Before Sunrise’ also explores the depth and significance of two individuals conversing with each other, a conversation and a journey so beguiling that it makes them fall madly in love with each other. Their eyes meet across a crowded train carriage and instantaneously they experience something exceptional. They start talking, their minds connect and they develop an attraction towards each other. They are Jesse(Ethan Hawke) and Celine(Julie Delpy), who decide to get off the train in Vienna to spend the day together. What follows is a day both of them will cherish till eternity. They wander the city of Vienna from mid-afternoon until the following dawn wondering where this night would lead. It is so much like real life, like a documentary with an invisible camera and there’s nothing more enthralling than real life. ‘Before Sunrise’ is about two nice teens, literate, sensitive, tentative, intoxicated by the fact that their lives stretch out before them, filled with mystery and hope, and perhaps even love. 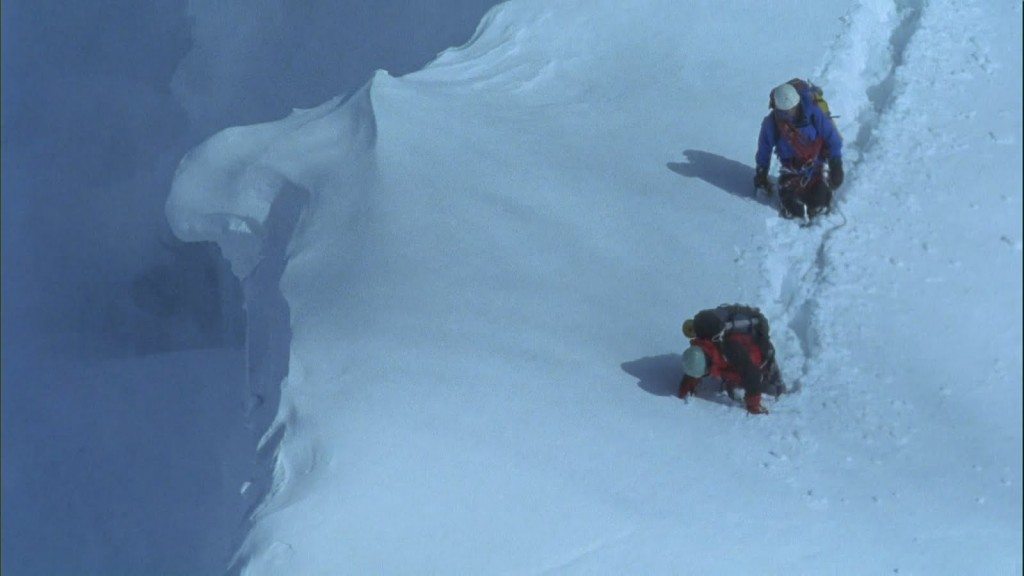 Truth is stranger and often more thrilling than fiction and never is that more the case than in Kevin McDonald’s epic BAFTA-winning docudrama which uses gripping staged action to dramatize the real-life near death events of mountaineers, Joe Simpson and Simon Yates, who were resolute to scale the forbidding west face of a mountain named Siula Grande, in the Peruvian Andes. Little did they know that this adventure would result in the most harrowing incident in their entire lives. Interspersed with accounts from the real-life Simpson and Yates, this terrifying tale will send a chill down your spine. It is more of a horror film, than any actual horror film could be. This minimalistic docudrama is an unforgettable experience, directed with simplicity that never tries to add drama or suspense but simply tells the story, as we look on in disbelief.

If you are trying to find out one film that is a masterpiece just because of its conversations look no further than ‘Before Sunset’. Its conversations are not only engaging and moving but also deep and enlightening. ‘Before Sunset’ is such a masterful work that it, ultimately, becomes a mirror, by looking into which, you can judge your own relationships: Where you went wrong? Who was actually “the one” for you? What opportunities you missed? What could have been? It’s one of the rarest of rare films where your own experience in life will enrich and nourish your experience with the film. Ultimately, ‘Before Sunset’ may only fully reveal itself to those who have felt the consuming heartache of roads not taken and borne the scars left behind by time. 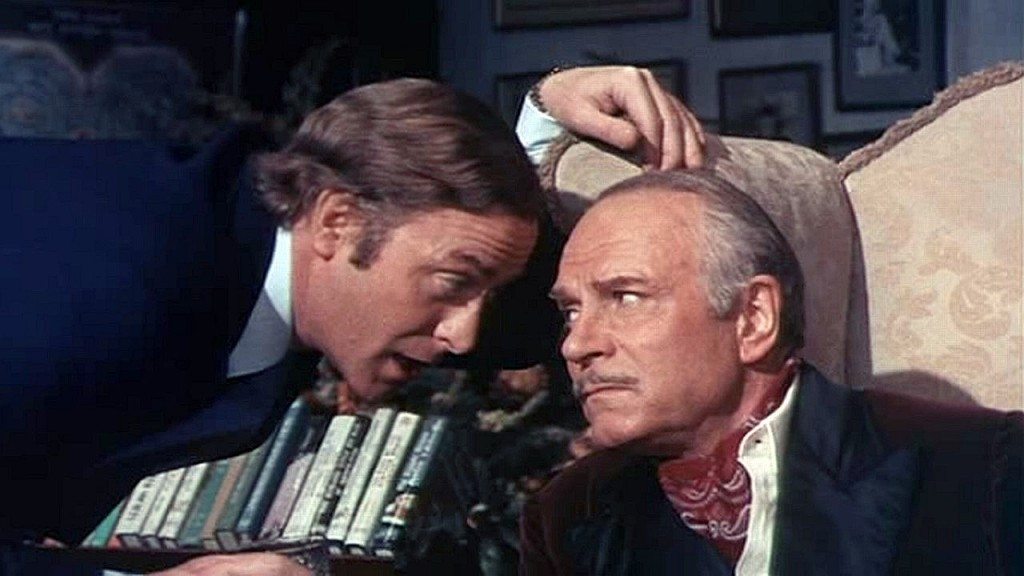 ‘Sleuth’ is a murder mystery, only apparently without a murder. Puzzled? Intrigued? That’s what one is after watching this grueling psychological boxing match. It’s the kind of mystery we keep saying they don’t make anymore, and thus it’s completely worthy of the top spot on this list. ‘Sleuth’, an utterly engrossing entertainment, is even funny and scary and superbly theatrical. It follows the story of Andrew Wyke, an upper-class writer and Milo Tindle, a working-class hairdresser, who constantly play villainous games in attempts to outwit each other. Revealing anything more about the plot of this perfect mystery, would be a capital offence. It’s an experience that keeps you on the edge of your seats and leaves the audience bamboozled. The play makes a remarkably easy transition to the screen because of director Joseph L. Mankiewicz’s willingness to respect its timing and dialogue. Now what really bring the movie to life, what makes it better than the original play are the lead performances by Sir Lawrence Oliver as Andrew Wyke and Michael Caine as Milo Tindle. Both do complete justice to their respective roles and it’s safe to say that no one could have done it better than them.