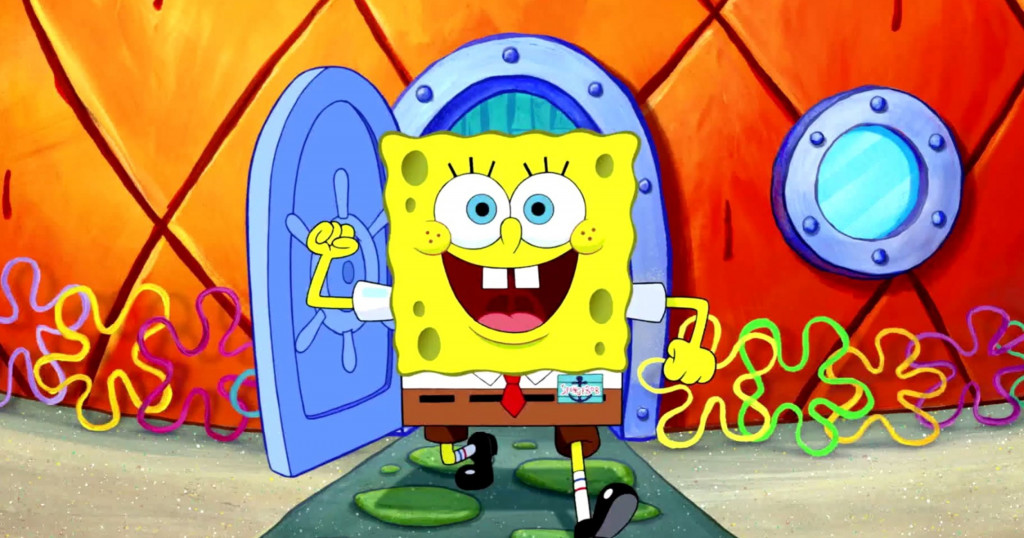 Spongebob Squarepants is one of the greatest kids shows of all time. Its characters include a sponge named Spongebob, a starfish named Patrick, an octopus named Squidward, a squirrel named Sandy, and a crab named Mr Krabs, and the storyline details their adventures down in Bikini Bottom, an underwater city. The show is known for its well-written, simple plots and exaggerated realisation of normal events, being more cartoonish than most cartoons have been. There’s so much to love here, a show that’s part of a lot of our childhoods, and in this article, we cover the list of Spongebob episodes, ranked in order of their merit, from good to best.

10. Survival of the Idiots 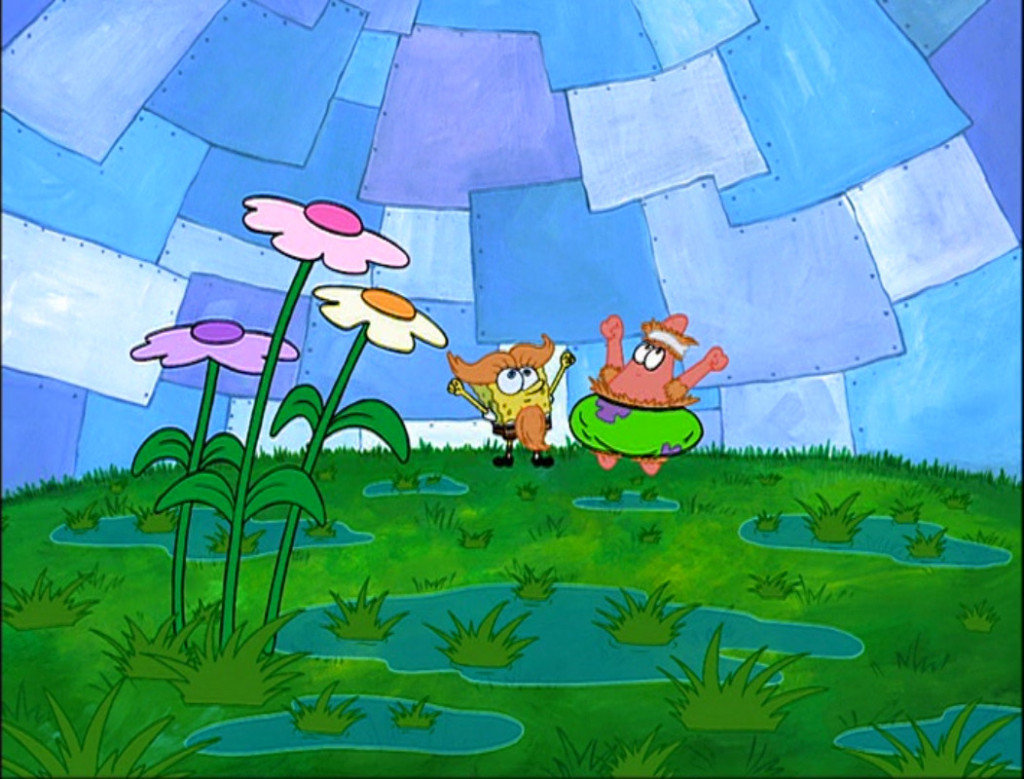 Sandy is hibernating for the winter, during which time Spongebob and Patrick show up at her place. Amazed by the cold, snowy state of the inside of her house, they decide to have some fun and play around. When the weather starts to become unbearably cold, though, they have no other option but to rip the fur off of Sandy’s natural coat and use it to warm themselves. Getting it off is no easy task, and the duo learns this the hard way. All three characters give their best in this episode, particularly Patrick. Every word he utters is so stupid that I just can’t control my laughter. 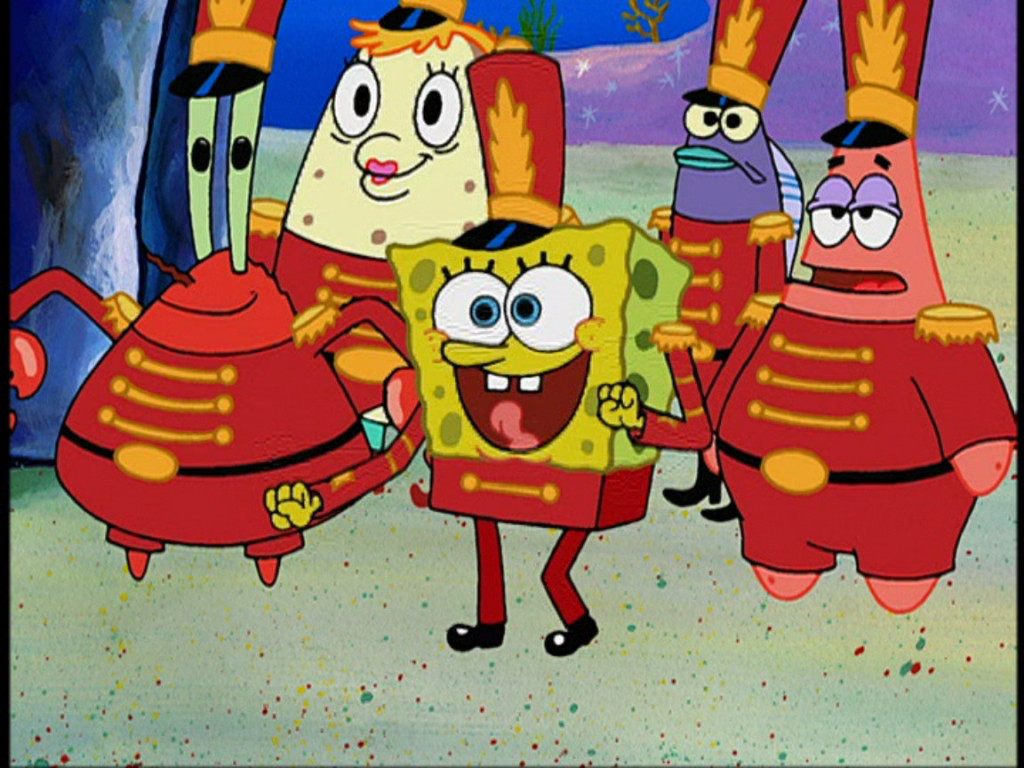 Band Geeks has inspired more Spongebob-related memes than any other episode. Ending with one of the best songs of the show, the episode sees Squidward trying to form a band with the misfits of Bikini Bottom in order to get even with his brother, Squilliam Tentacles. Complications ensue as band members play horribly and quarrel, angering Squidward to the point where he can’t take it anymore. Slowly realising what they’ve done wrong, the band decides to make it up to the octopus by giving it their all in one night’s practice. 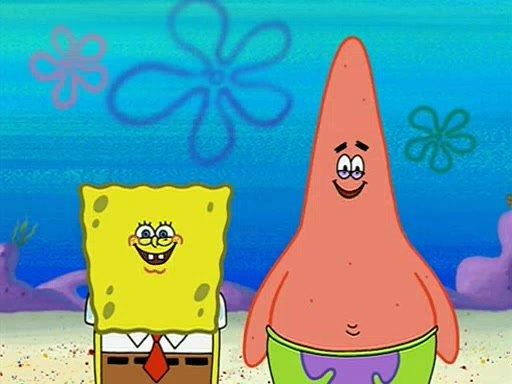 Mr Krabs assigns Spongebob and Patrick the duty of painting his house, with the warning that the paint they are using is permanent, and so they shouldn’t get any of it on the prized possessions that crowd his wall. One reason Spongebob Squarepants worked better than other kids shows is its tendency to portray a hyperactive sense of energy, and that’s partly what makes this episode work so well. Minute details are treated with such importance by the characters that it becomes way too absurd to leave without a good long chuckle. 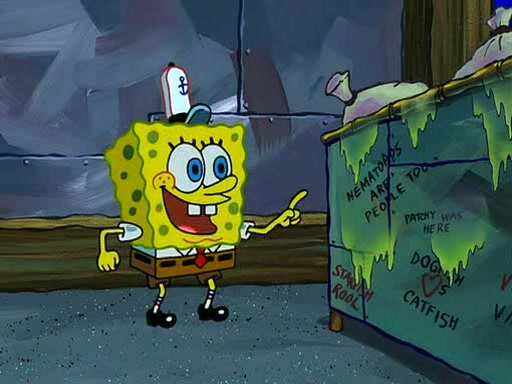 While taking the trash out at the Krusty Krab, Spongebob notes the graffiti on the dumpster and reads it out. He comes across a word on there that Patrick says is a “sentence enhancer”, and so they begin to use it in conversation. The word is a swear, though, and Spongebob’s frequent usage of it loses the Krusty Krab some customers, which maddens Mr Krabs, who shouts at the two of them for acting so uncivilised. The word becomes a part of their vocabulary though, which leads to some really funny moments, like what happens when Mr Krabs himself strikes his leg on a small stone. 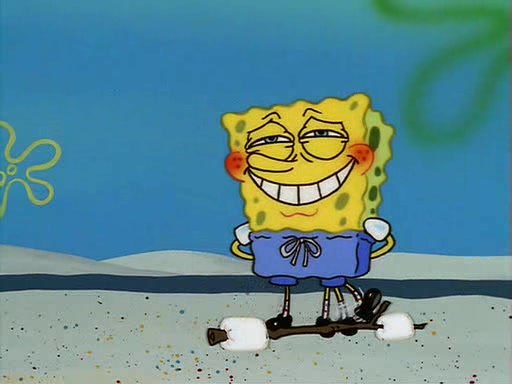 Larry invites Spongebob and Sandy to lift some weights when they go to the beach. While the others do a great job, Spongebob just can’t compete with them, and upon weightlifting a stick with marshmallows on each end, he rips his pants. The crowd goes wild and everyone starts appreciating him as a funnyman, inspiring Spongebob to rip his pants several other times in different situations to get the attention of those around him, especially his dear squirrel friend. After a while though, he takes it a little too far, and his crowd is no longer amused. This one’s just way too funny to ignore, plus the song at the end is very memorable. 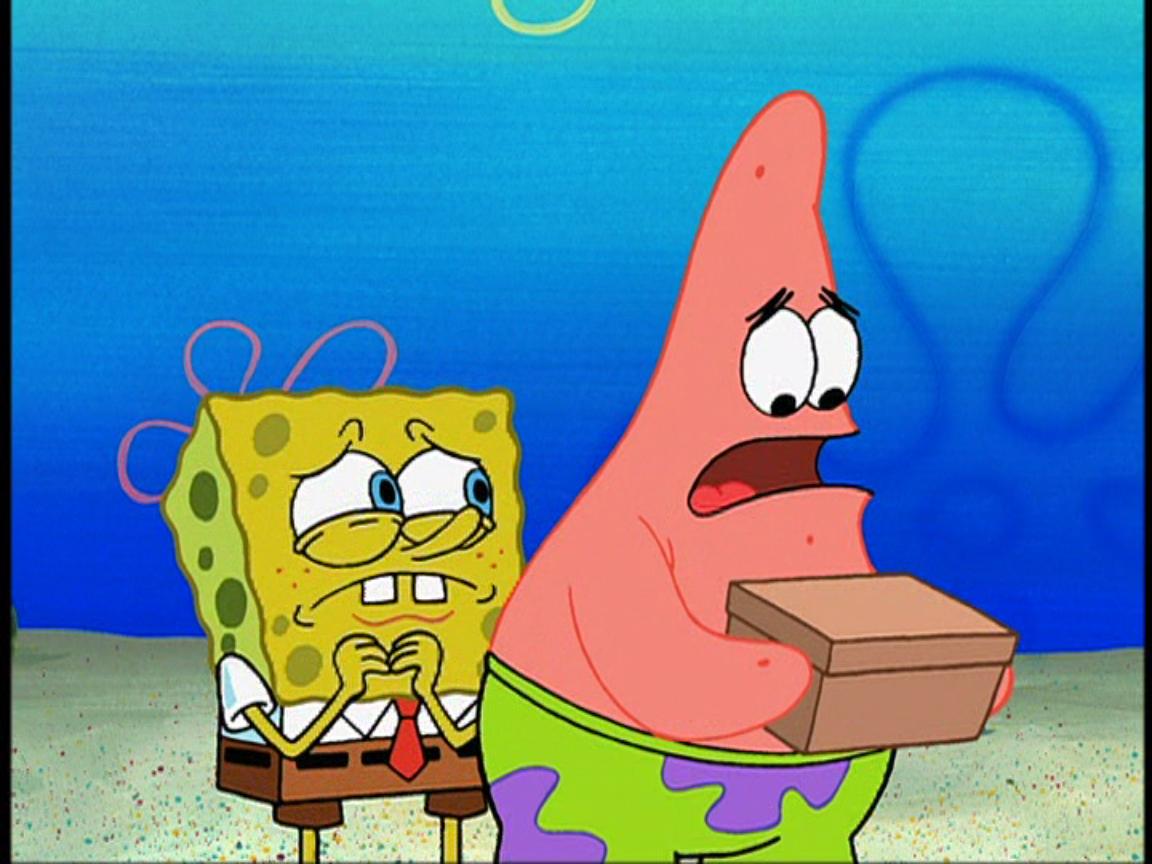 The Secret Box is an episode that works because of its simplicity. Patrick has a box with him and he won’t show what’s inside to his best friend Spongebob. The more the starfish talks about it, the more intrigued the sponge becomes, till he can’t take it any longer. Spongebob tries every possible trick in the book to try and get to know the contents of Patrick’s secret box. When it brings into question the honesty of their friendship, things take a turn for a hilarious, seemingly emotional set of outbursts.

4. Fear of a Krabby Patty 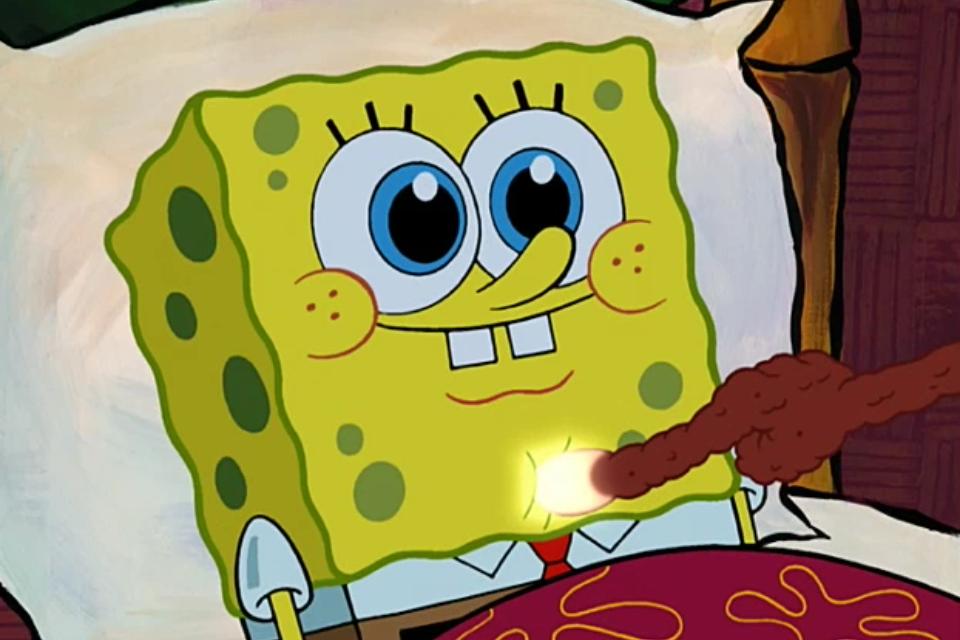 Plankton tricks Mr Krabs into overworking his employees so that he can steal the secret formula to the Krabby Patty once everyone is exhausted. Spongebob works so hard that he literally starts to see Krabby Patties everywhere around him, in his deranged, surreal perception of the world resulting from the burden. Thus, he goes to see a psychiatrist (who is actually Plankton in disguise), but every method in the tiny creature’s arsenary seems to go awry as Spongebob just won’t respond with anything of use. 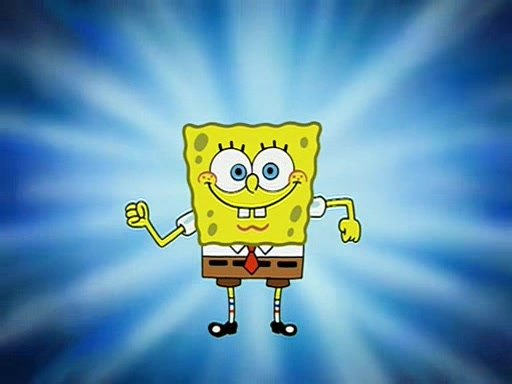 Often called the best episode of the show, Krusty Krab Training Video is different from most of the other episodes in its format. It works like an instruction video, advertising the Krusty Krab and inviting employees by giving them training on pretty much everything else except the art of making the Krabby Patty using the secret formula. Spongebob is the model employee in the video and he’s just dying to prepare the prestigious burger. I love this episode for how innovative and rewatchable it is. The final couple of minutes are pure comedy gold. 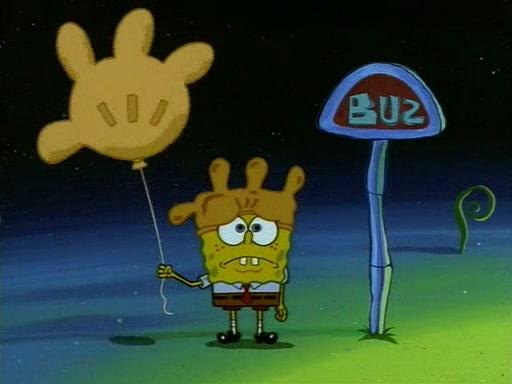 Spongebob and Patrick, while returning from Glove World, an amusement park, take the wrong bus and end up a couple miles away from Bikini Bottom, at Rock Bottom – a place filled with gruesome creatures, utter darkness, and inhabitants that speak a strange language. Patrick manages to find a bus leading him back home, and he gets on it before Spongebob does, leaving the poor guy all alone and scared. Buses continue to come and go, but various distractions stop Spongebob from getting on each one of them. This one’s kinda creepy. 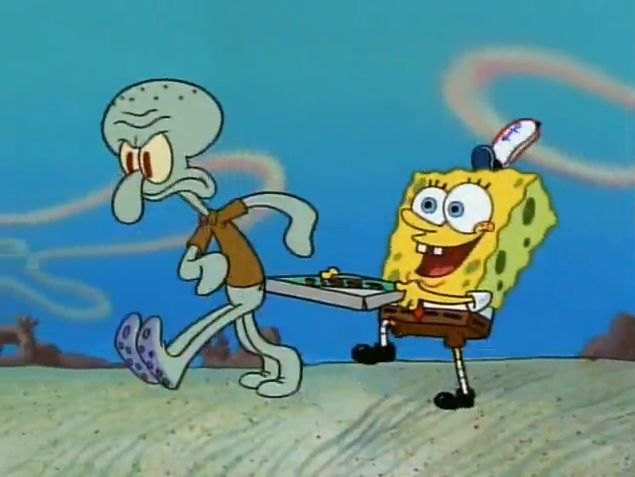 When a customer orders a pizza from home, Krusty Krabs’ money-hungry Mr Krabs assigns Spongebob and Squidward the task of delivering it at his doorstep. Spongebob, with his little knowledge of cars (ahem… I mean, “boats”), backs their vehicle up several kilometres behind (in one long, amusing stretch), completely stranding the two, and taking up all the fuel they had. Determined to deliver the pizza to the customer, Spongebob decides to walk to his house on foot, using the survival skills of The Pioneers to aid his journey. What follows is perhaps the one episode I’ve laughed the most for, with an ending that always gets me rolling on the floor. This one’s a pure classic!