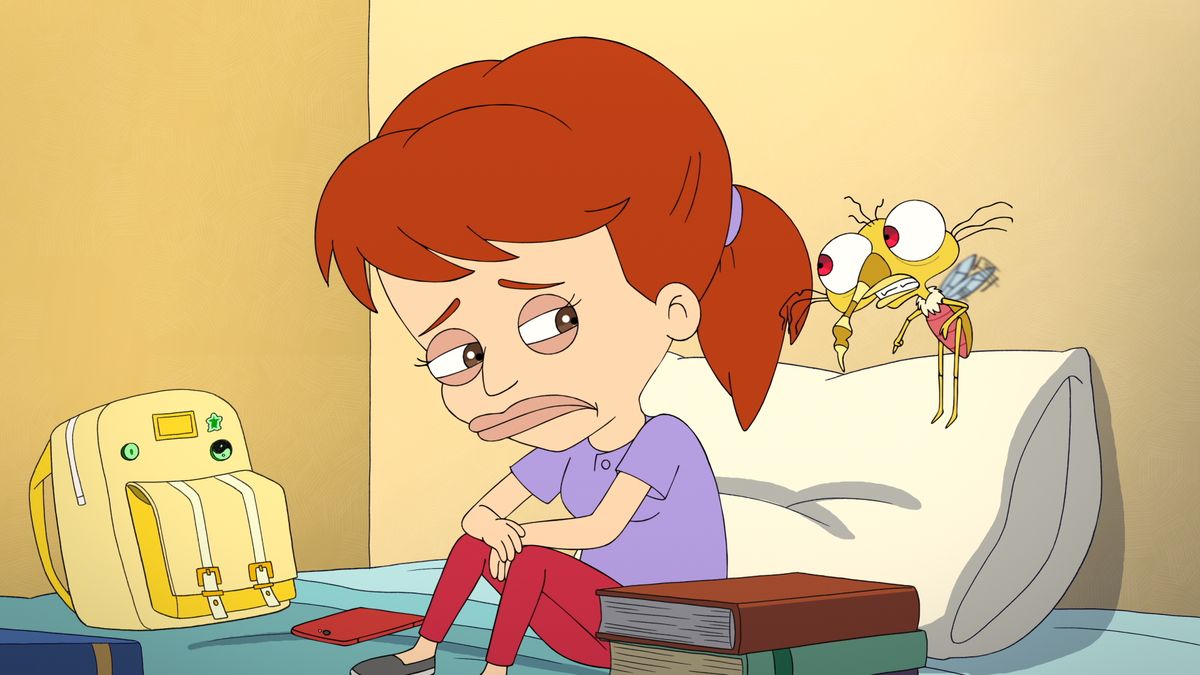 Overall, ‘Big Mouth’ season 4 feels like the show, along with its characters, is doing a bit of growing up itself. Less time is spent on needlessly raunchy escapades and more on elegantly written sequences of self-inspection and reflection. Here is a summarized recap of the 10-episode fourth season of ‘Big Mouth,’ with the subtleties, nuances, and story arcs of its satisfying ending explained as well. SPOILERS AHEAD.

‘Big Mouth’ season 4 starts right from the ending of season 3 – with Nick and Jessi leaving for camp after Nick and Andrew’s big falling out. Andrew’s dad upends his plan of spending the summer away from Nick’s self-absorbed toxicity by forcing him to attend camp as well. Summer camp is painful for everyone. Andrew bullies Nick and gets extremely constipated. Nick, insecure about the other boys seeing his body, stops showering and gets made fun of for stinking. 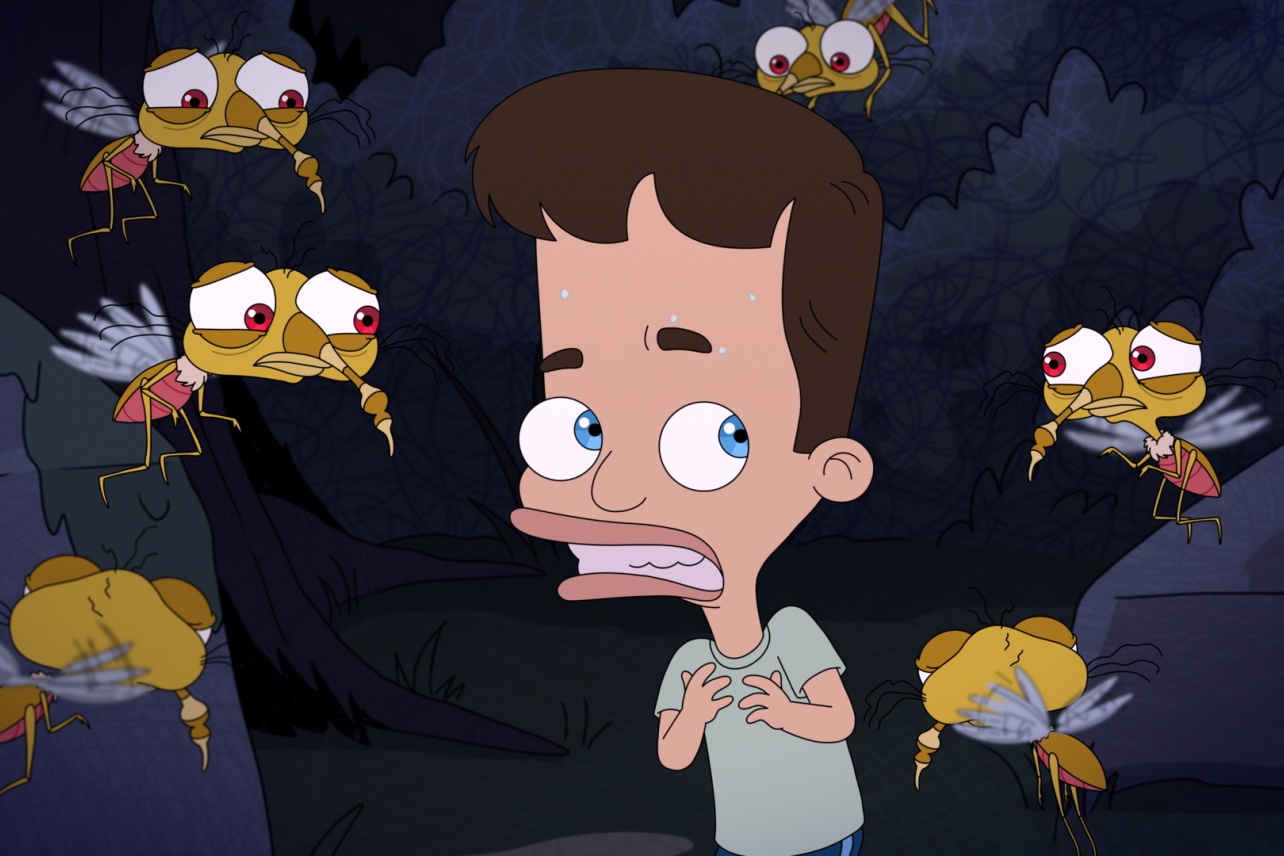 Jessi gets an embarrassingly huge period. Natalie, who has transitioned during the intervening year, gets asked invasive questions about her genitals by the guys with who she was previously chummy. Meanwhile, Missy goes to visit her dad’s side of the family in Atlanta, and her cool older cousins teach her how to embrace her “black” side. Missy gets the standout storyline of season 4 as she grapples with racial identity and what being biracial means to her. Back in Bridgeton, Jay and Lola become a couple, and it’s weirdly cute (probably because they’re both some levels of gross).

Eighth grade commences with almost everyone plagued by Tito the Anxiety Mosquito, an annoying little bugger who catches the kids at their weak moments and feeds into their fears and insecurities. Hormone monsters Maury, Connie, Mona, and Rick, are around as well, but the series focuses more on Tito, and to some extent, Depression Kitty as this season’s main beasts. Characters such as Coach Steve and the ghost of Duke Ellington only appear in a couple of episodes.

As the new school year starts, Andrew and Nick realize that maybe the universe does not revolve around them as they get rejected by a couple of 7th-grade girls for their immaturity. Jessi moves to New York City with her mom but finds it difficult to fit into the academically advanced elite school and starts skipping to hang out with a handsome 9th-grader who becomes her boyfriend. Nick gets jealous of Jessi’s poser boyfriend, Michael Angelo, and Maury tells Connie it’s because Nick likes Jessi. 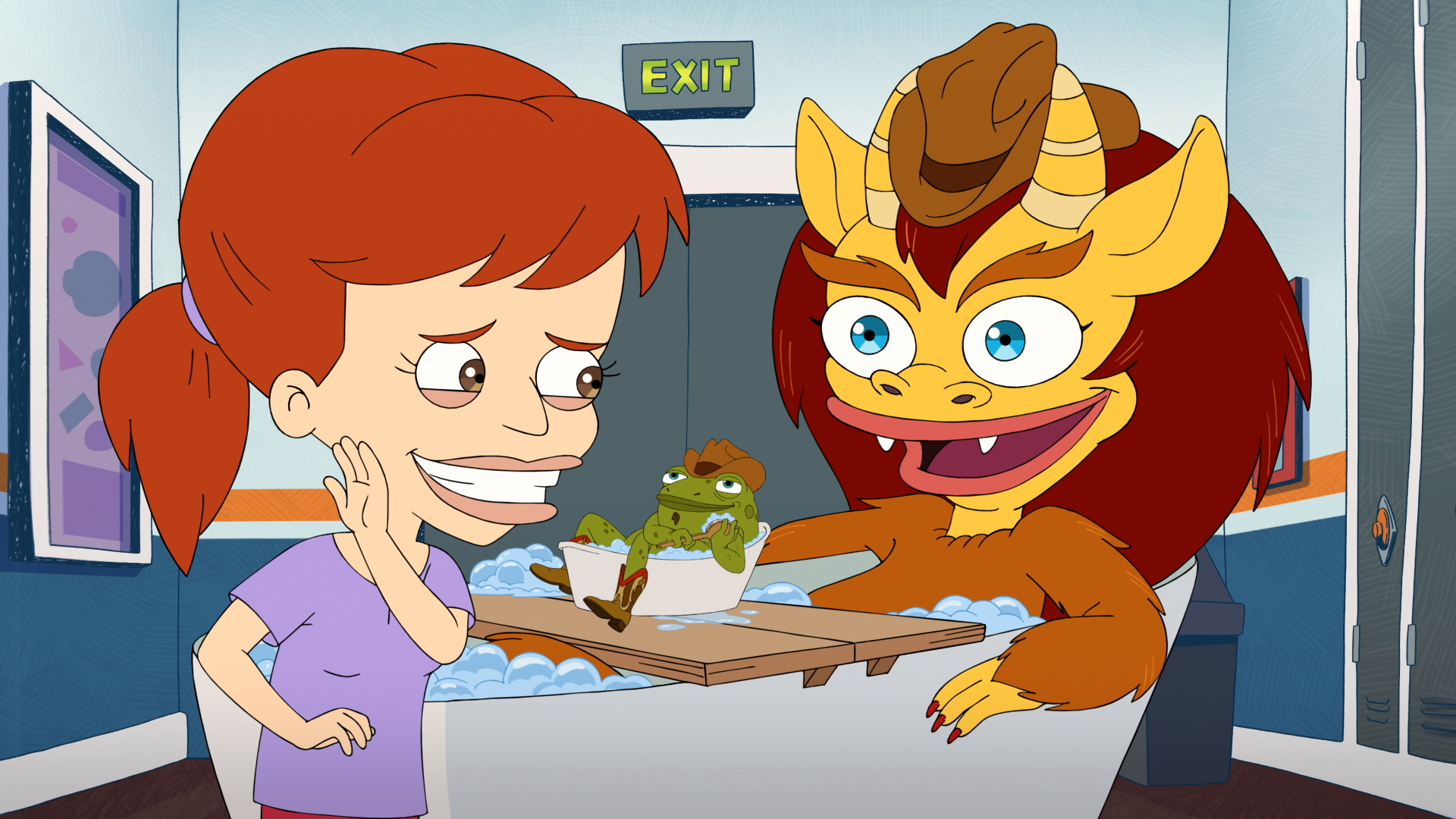 Connie breaks up with Nick because she cannot be his and Jessi’s hormone monster at the same time, if there is a conflict of interest. Oldie Rick is reassigned as Nick’s hormone monster. Throughout the season, Matthew struggles with the prospect of coming out to his family. When he comes out as gay in front of his parents, his mother reacts badly while his dad, on the other hand, takes it pretty well. Devon teaches Missy about “code-switching” in a foot-tapping musical number. 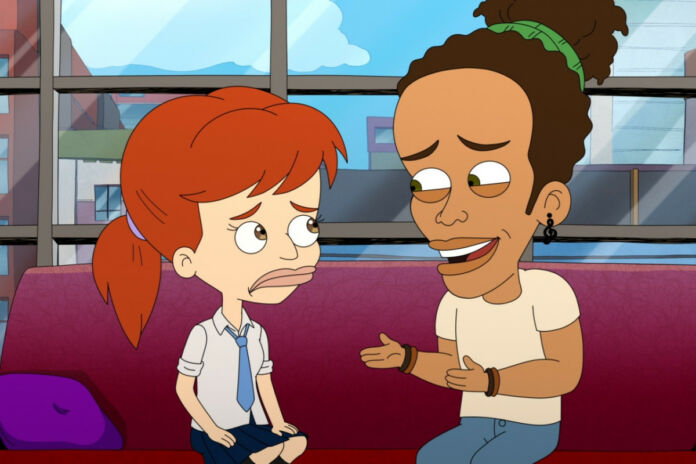 Andrew deals with OCD, and a crippling fear of dying that keeps getting worse, while Nick shuts himself off completely to protect himself from his burgeoning anxiety. Jessi’s parents, when they find out about her skipping school, move her back to Bridgeton to live with her dad and attend her old school. Jay tells Lola he loves her but is deeply hurt when she doesn’t say it back immediately. The two declare war that can very well be expected to carry into season 5.

At Halloween, all the kids attend a sorority party and face their inner demons individually. All of them find relative peace, except Nick, whose soul becomes displaced when his body gets taken over by his evil alter-ego. With the help and support of his friends, Nick takes back his body by embracing all the worst parts of himself and thus, eliminating the evil alter-ego. Gratitoad teaches the gang about the healing power of gratitude. As Jessi admits, being grateful for the things (and people) she has, does help to scale back her anxiety significantly. 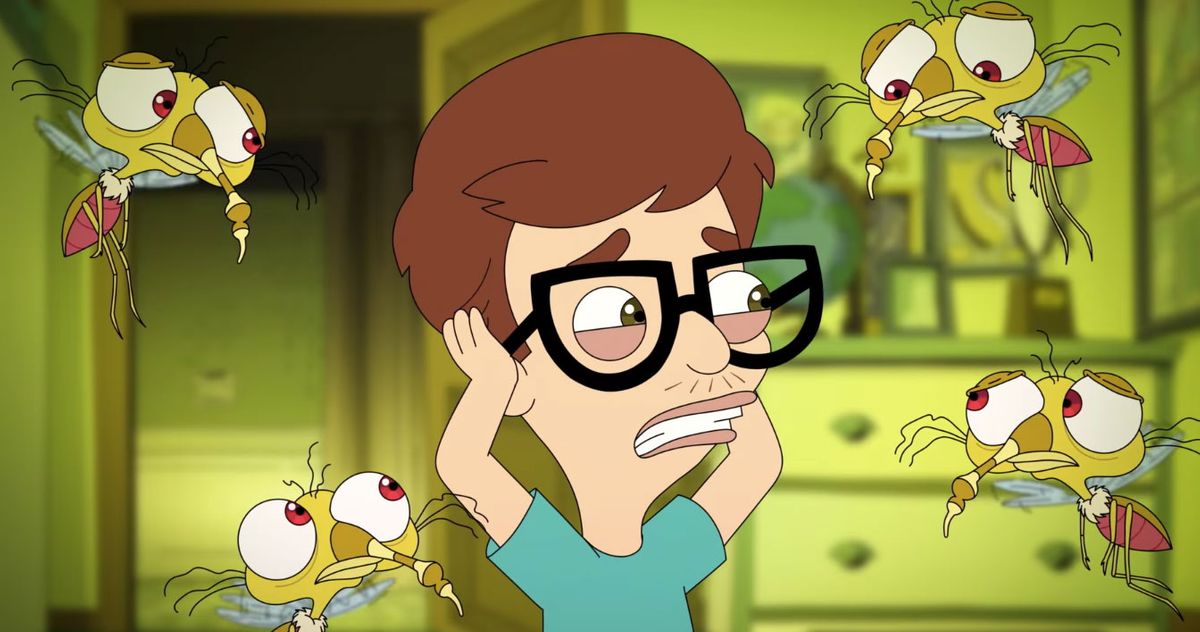 Missy gets perhaps the most important and socially relevant storyline (for current times) in season 4. Being the kid of a white mother and black father, Missy struggles with finding the balance between who she was and who she is growing up to be. She doesn’t know how to embrace her “black side,” but with her cousins and Devon’s help, she starts to get it bit by bit. Her struggle with racial identity is beautifully and respectfully portrayed, building up slowly throughout the season and culminating in the character’s voice artist switching from Jenny Slate to Ayo Edebiri. 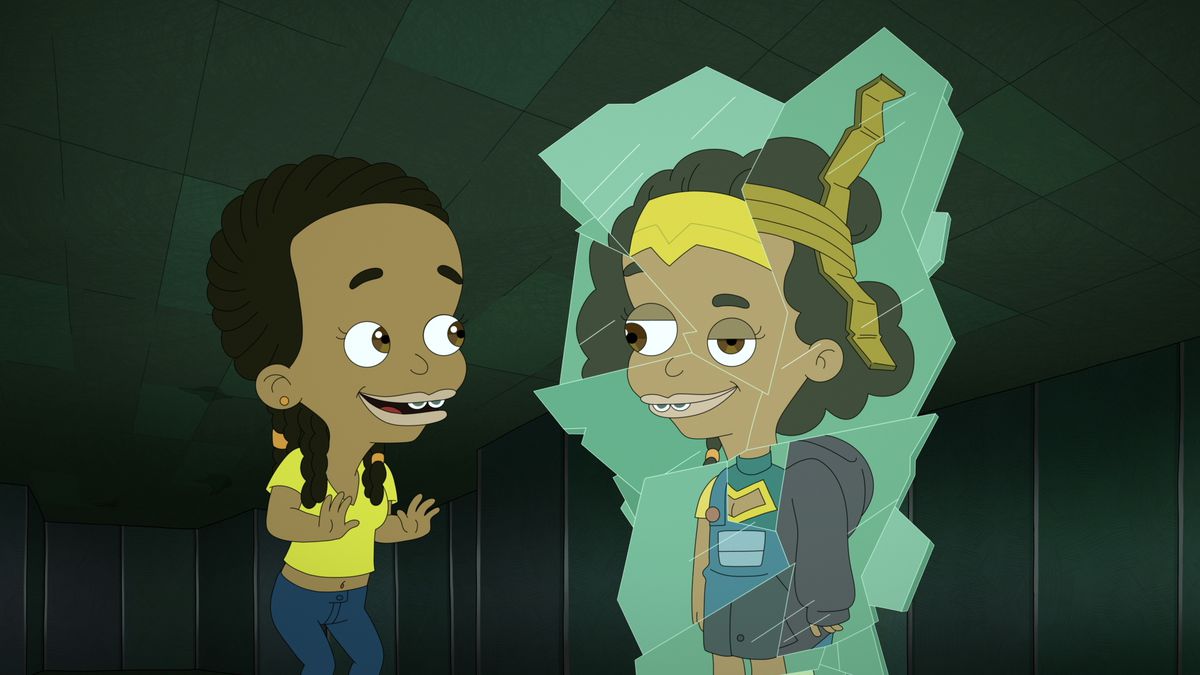 It’s a sensitive topic and an imperative one and is dealt with as such. Devon’s take on “code-switching” gives unexpectedly deep insight into the oppressive culture that forces kids of color to alter their mannerisms depending on who they’re interacting with, just to put the people around them at ease. Instead of simply being themselves, black kids have to be careful to switch up their personalities to fit into the mold of society and it is crazy how most of the world seems to be okay with it. Season 4 of ‘Big Mouth’ calls it out with one exquisite song sequence.

Sensitive subjects such as hormone-blocking and gender-transition are handled with surprising grace and elegance in the fourth season of ‘Big Mouth.’ Natalie used to be a boy but shows up to camp as a girl, and her former bunkmates are understandably confused. But instead of clearing up their confusion with genuine questions, the boys make distasteful remarks and ask inappropriate and gauche questions.

The girls are no better and try to push Natalie into what they think is acceptable “girl behavior.” Natalie’s story about how she got rid of her over-enthusiastic and overtly masculine hormone monster by using hormone-blockers is genius and fits seamlessly into the show’s overall premise.