Billions Season 5 Episode 2: Everything We Know 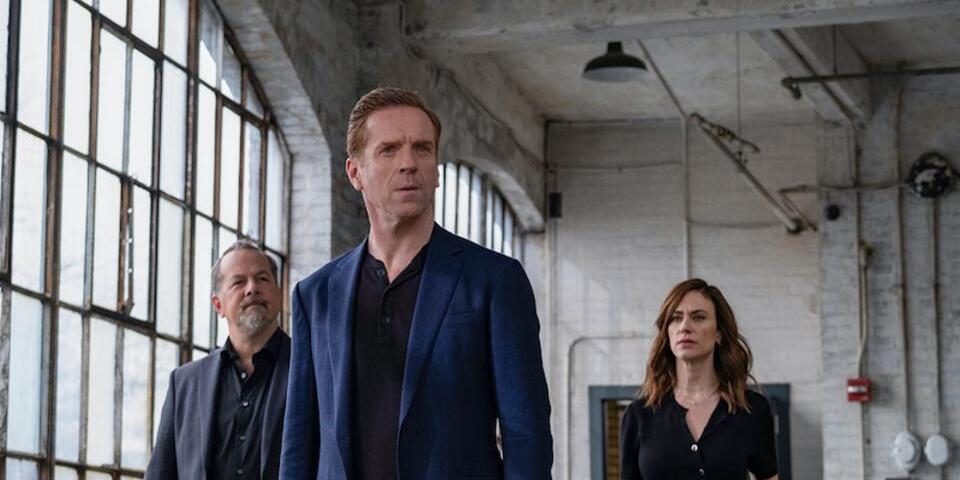 Showtime’s hit drama, ‘Billions’ is back with a bang. Money and power struggles are the main pillars of the show’s premise, and the fifth season has managed to elevate the bar by introducing convoluted plot-lines in the season premiere itself. In the episode, titled ‘The New Decas,’ Axe and Wagner’s Ayahuasca-induced Alaskan trip comes to an end when they have to rush back to home base for a Vanity Fair photo-shoot, where Axe meets his potential nemesis – the charming and sophisticated, Mike Prince.

Chuck Rhoades pursues a cryptocurrency case, sealing a mine Axe is connected too and arresting two engineers. Of course, Axe is enraged and is planning his next move. In the personal front, Wendy turns down Chuck’s plea for another chance and pens a public divorce release with help from Lauren. Chuck Rhoades Sr. ties the knot with his mistress Roxanne. Chuck and his mother, Ellen, have a heart-to-heart. Surprisingly, WWE Raw Women’s Champion Becky Lynch makes an appearance as the mediator between Taylor Mason Capital and Axe Capital. Want to know what happens in ‘Billions’ season 5 episode 2? Well, we are here to help you with that.

You can watch ‘Billions’ season 5 episode 2 by tuning to Showtime at the above-mentioned time. You can also catch the show on Showtime’s official website and the Showtime app.

The upcoming episode is titled ‘The Chris Rock Test.’

The episode might test the patience of our favorite anti-hero, Bobby Axelrod. Before we talk about Axe and Chuck, let’s take a moment to acknowledge the powerful move, Mike pulls on Axe in his absence. He is clearly on Axe’s target, and it will be interesting to see the two engaging in an informal conversation at the convention. As far as Wendy and Chuck’s relationship is concerned, it’s over. I don’t think there’s anything that can reverse the damage their marriage has suffered.

Chuck is really willing to try and be a better husband, but the ship has sailed and therefore, he might choose a different path. This divorce looks like it’s going to get nasty as Chuck might put up a restraining order on Wendy’s assets. Does that mean Wendy would cross the line and hurt her the person she once loved? Taylor Mason, on the other hand, might map out a plan to strike out both their enemies in one shot. We might get a glimpse of Taylor’s backstory in the upcoming episode, which can help us understand the character’s motive better.

The fight between Axe-Wagner and Kate-Chuck is on. The cat is out of the bag after Taylor confesses to Axe about them being sent to Axe Capital to be the eyes and ears of Chuck. And after learning about the two engineers, Axe has revenge on his mind, and he might drop the first bomb in the next episode.