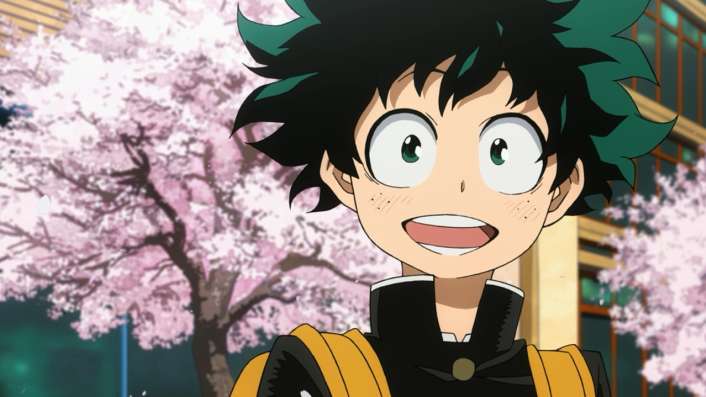 Boku no Hiro Akademia or My Hero Academia is an adventure anime series that follows around a boy named Izuku Midoriya, born without any quirk but who fulfills his dreams to become a true hero.

A long time ago, an extraordinary baby was born with a special power and as time passed, a similar occurrence happened all over the globe. In a short time, every human had obtained unique powers which are called Quirks. Everyone could become a hero if they had quirks. The series follows around a boy named Izuku Midoriya. He lives in a world where superpowers are said to be a norm or quirk. More than 80% of the population has gained superpowers in the world. Izuku aspires to become a Hero with unique superpowers. He always gets bullied by his classmates for not having Kosei (quirk). One day, he saves his childhood friend Katsuki Bakugo from a villain. After seeing his heroic move, the world’s greatest hero sees his potential and bestows upon him his own power which is called “One For All”. He recognizes his value and enrolls him in a high school which provides training to become superheroes. He gives an entrance exam into the U.A. High School to master his newly acquired quirk. Basically, it is a school that builds superheroes of the next generation. He gets acquainted with a few students. They not only have to follow school duties and do Hero training but also have to knock down the League of Villains which is an evil organization. This organization’s main purpose is to destroy each and every Hero and control the world. This evil organization is acclaimed by All Might’s archenemy.

With so many hurdles ahead, he refuses to give up on his ambition of becoming a hero and fighting for a good cause. He becomes very determined to do the elite hero training in the U.A. High School. One day, he gets a chance to meet the best hero and his one and only idol, All Might. He gets inspired and goes under special training. He is powerless in front of any enemies so he starts working harder than before. He gets the fruit of his hard work and eventually succeeds in attaining All Might’s power. He can now go to the school of his choice with his newly discovered abilities. From that moment onwards, his tough journey to become the number one hero on earth. His homeroom teacher, Shota Aizawa declares that there will be a Quirk Apprehension Test and if any students rank last will be expelled immediately. He wins the match against his friend Katsuki Bakugo and gets praised by his classmates. To reach to the top, he passes all the exams in Class 1-A. One day he has to fight with All might who plays as a villain character in the Practical Test. Even if he is his idol, he has to fight with him. After the match, Izuku and unconscious Katsuki wins. All Might understands that Izuku is always a savior when it comes to saving somebody no one comes in his way.

In the third season, heroes of Class 1-A and 1-B are sent to the hardest summer training camp. Skilled heroes bring out and push every student’s Quirks to new limits, but for students, it is a very tiring challenge which they have to face one after another. Excellency in their every game becomes the least things to worry about; their only struggle is to survive in this training.

Izuku Midoriya: He is a kind and a timid boy born without any powers. His nickname is Deku. One day, All Might bestows his powers on him and he gets One For All power.

Katsuki Bakugo: He is the childhood friend as well as studies in of 1-A with Izuku. His nickname is Kacchan and possesses the quirk of Explosion.

All Might: He is the world’s greatest hero who is idolized by Izuku Midoriya. He is a teacher at U.A. High School.

Boku no Hiro Akademia season 3 started airing from April 7, 2018. According to the report of Anime News Network, Season 3 will include two cours or 25  episodes. The news has been confirmed by Funimation.

Watch all the episodes of Boku no Hiro Akademia online dubbed in English in High Quality on Funimation and Crunchyroll.