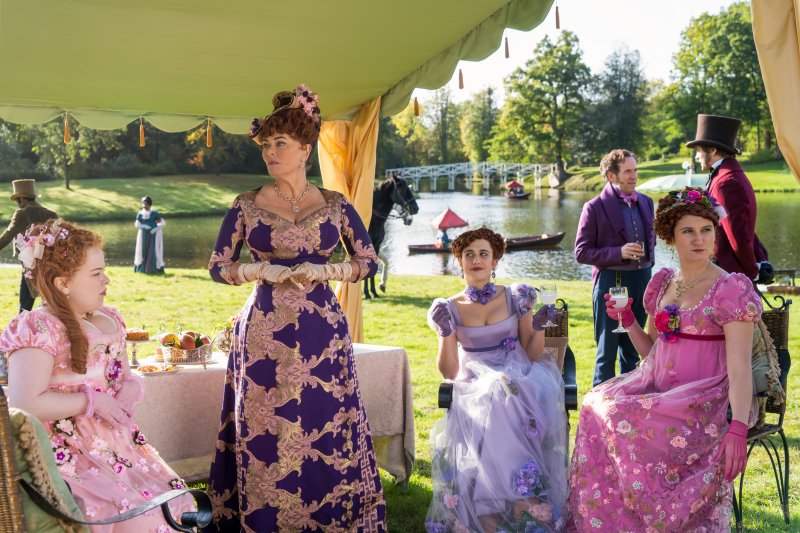 Netflix’s period drama, ‘Bridgerton,’ is a lush and lavish experience for audiences who enjoy dramatic love stories set in a historical setting, even as a guilty pleasure. The story follows the affairs of the notable nobles of the Bridgerton family as they navigate their way through London’s high society to find true love. Season 1 is devoted to Daphne Bridgerton’s romance with Simon, the Duke of Hastings. After they get married (to avoid the scandal and social ruin their one stolen kiss would have brought about), the newly-weds embark on a life of marital bliss, basking in the glow of their near-constant lovemaking.

But when Daphne finds out that Simon has been employing effective birth control in order to avoid getting her pregnant while making her believe that he could not beget children, she gets furious.
Daphne forcibly makes Simon climax inside of her before confronting him about the contraception deception. They both feel the sting of conjugal betrayal and lose trust in each other – Daphne, because he deceived her, and Simon, because she sort of raped him. Here is a recap and review of ‘Bridgerton’ season 1 episode 7, which continues their story. SPOILERS AHEAD.

With the truth about Marina’s pregnancy outed by Lady Whistledown, the ensuing scandal threatens to ruin the social standing of the Bridgertons and the Featheringtons. Colin is not allowed to meet Marina for fear that people will think that he is the baby daddy, and that will bring upon further damnation to his sisters’ futures and sully the Bridgerton name even more. Simon and Daphne, still bitterly fighting over who betrayed whom, return to London to show their support for the Bridgertons.

Daphne plans to use her newfound influence as a Duchess to restore her family’s good name and divert any scandal away from them. When Marina and Colin do get to talk face to face, in a meeting set up and chaperoned by Daphne, Marina acts defiant and refuses to take any responsibility for the fact that she was going to trap Colin in a fraudulent marriage. Colin is inconsolably heartbroken and sadly tells her that if she had come to him with the truth, instead of lying to him, he would still have married her and given his name to her child.

Feeling sorry for Marina, Daphne volunteers to try and find her soldier boyfriend, Sir George, and writes to an army general in order to locate him. After attending one of Sir Granville’s sensual soirees (and participating in a threesome with his wife) in the last episode, Benedict has questions about Sir Granville’s lifestyle. Sir Granville tells Benedict that he is in love with Lord Wetherby and his marriage serves as the perfect cover under which he and his wife can pursue their own separate hedonistic diversions. Elsewhere, Eloise’s efforts to learn the true identity of Lady Whistledown turn up nothing.

Simon tells Daphne that if she is pregnant, he will do his duty and take care of her and the baby, but if she has not conceived, their marriage will remain in name only, and they will lead separate lives because he cannot bring himself to get over what she did. He also opens up about his father’s cruelty and neglect, and the real reason why he won’t allow himself to have kids. The episode ends with Daphne getting her period, establishing beyond doubt that she is not pregnant.

At this point, it feels like if someone were to merely sneeze, it would cause a scandal and/or lead to their utter ruin. Of course, Marina hiding her pregnancy and trying to entrap Colin in a deceitful marriage seems reasonable cause for scandal (given the regressive times this show is set in). However, it still doesn’t stand to reason that the reputations of the other Featheringtons and Bridegrtons take an undue hit as well. What we do take an issue with is that not once does Marina outrightly apologize to Colin for lying to him and breaking his heart.

Instead, she acts like the victim and claims she had no one to guide her in the correct direction. Umm, what else was Penelope doing when she tried to make Marina see the error of her ways? Convenient for Marina to forget about Penelope begging her, on numerous occasions, not to deceive Colin in such a horrible way. The only time Marina actually says she is sorry is to Daphne, admitting that she was wrong to take advantage of Colin’s trusting nature. I mean, we know Marina’s in a sticky situation with her pregnancy and all, but still.

The highlight of this episode, though, is Benedict’s conversation with his painter friend Sir Granville about his queer lifestyle. Having never come across queer relationships (being gay was illegal back then and punishable by death), Benedict is understandably confused. Granville tells him that his relationship with his wife is better than most unions, where love and understanding are practically non-existent. He also elaborates on what it’s like loving someone he cannot be with openly.

The scene gives a bit of an insight into the struggles the members of the LGBTQ+ community had to go through at the time, risking their very lives to love freely. When Sir Granville states, “It takes courage to live outside the traditional expectations of society,” it resonates with us on more than one level. Lastly, Simon and Daphne’s relationship in this episode is so uncomfortable and awkward that it’s weird to watch. What both of them did to each other is so wrong (on different levels) that you’re left wondering – how will they come back from this?