Where is Brother vs. Brother Filmed? 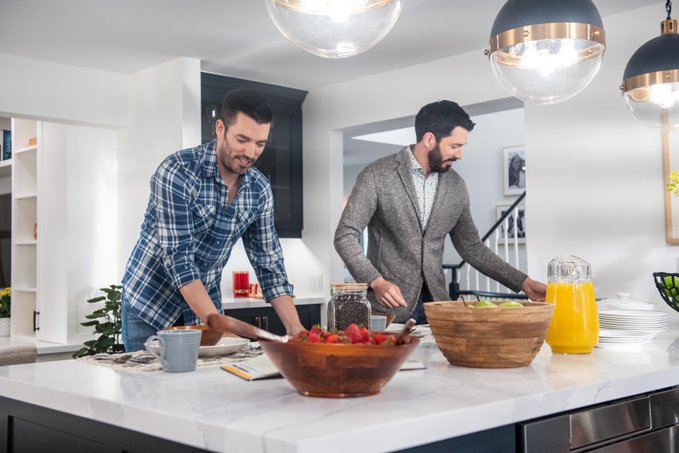 ‘Brother vs. Brother’, helmed by the ‘Property Brothers’, namely, twins Drew and Jonathan Scott, is a reality tv show that dropped on HGTV in July 2013. It follows the duo as they team up with their individual crews of contractors, designers, and realtors while competing against each other to purchase, revamp, and then sell a property. At the end of each season, the one who makes the maximum profits from the sale wins the contest. ‘Brother vs. Brother’ has spawned seven seasons to date and each installment has been filmed in a different location. If you wish to know more about the shooting details of one of HGTV’s highest-rated series, you have come to the right place.

While the first two seasons were filmed in Los Angeles, Drew and Jonathan reached Las Vegas for the third iteration. Even season 4 brought the brothers back to Las Vegas. The following outing saw the duo tackling properties in Galveston, Texas. Certain scenes, especially the ones involving other HGTV stars, were shot in Waco, Texas. The sixth iteration was filmed in the suburbs of San Francisco.

We are only THREE DAYS away from the season premiere of #BroVsBro! Set those DVRs for Wed at 9|8c. While we wait, let's take a look back at Season 5. When they say everything is bigger in Texas…they mean it.😲 Watch more at https://t.co/tRGSlCOXKT or on the @HGTV GO app. pic.twitter.com/1jIo9vmo1k

In the latest, seventh edition, Drew and Jonathan return to film ‘Brother vs. Brother’ in Los Angeles. And this time, they tackle the historic Hancock Park. This is also the place where Drew’s wife, Linda Phan resides in a house the couple had renovated themselves. In an interview with HGTV, Drew said: “We’re taking our sibling rivalry to the neighborhood where I built my honeymoon house. I have the home field advantage and plan to settle this once and for all with a hometown win.” The properties featured in season 7 include two vintage mansions that have serious aesthetic challenges.

What happens in Vegas, stays in Vegas…or does it? 🤔 Season 4 was one for the books! Who will be the Season 7 champion? Watch the season premiere Wednesday at 9|8c! Until then, go back and catch the best of #BroVsBro at https://t.co/tRGSlCOXKT or on the @HGTV GO app. pic.twitter.com/TCSXVEOppU

When Scott and Jonathan decided that they wanted to film season 7 in LA, they did face some challenges, owing to the shutdowns of Hollywood productions, thanks to the COVID-19 pandemic. They had to introduce some changes in the shooting format. For instance, the crews used operating and illustration software to devise design plans rather than visiting the homes in-person. With the teams already having slowed down because of social distancing norms, season 7 was filmed at a much-relaxed pace.

Additionally, the sessions included “a minimal crew, closed set, hand-washing stations, temperature checks, and a morning safety brief — all overseen by a health and safety manager who makes sure protocol is maintained” — as stated by Drew in an interview with Variety. All the sets had trained COVID personnel and strict measures in places, requiring the cast to sign affidavits every morning, stating that they had not attended any large group gatherings.

All the group scenes in season 7 were filmed outdoors while maintaining a safe distance. And masks were a part of the construction process, with crews working separately in individual parts of the house. Following the filming, editing on the episodes had continued remotely. For a detailed sneak peek into whatever went behind the scenes in season 7, you can check out this link on HGTV.