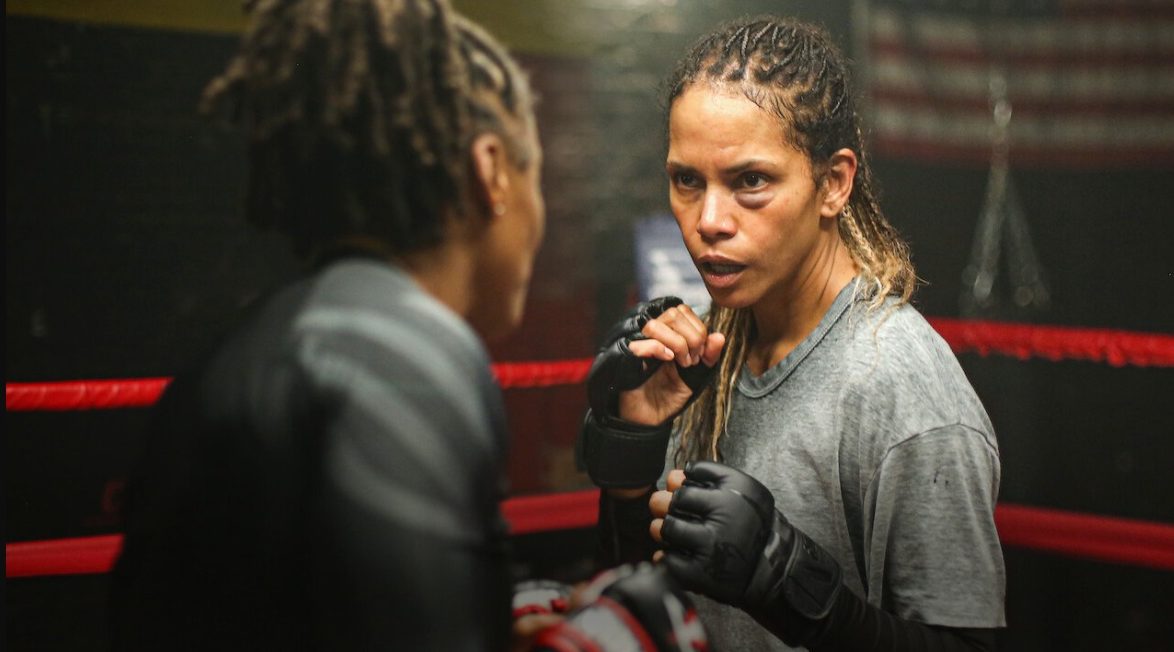 ‘Bruised’ is a sports drama that follows the talented but disgraced MMA fighter Jackie Justice. After a brutal defeat that crushes her career, Jackie “Pretty Bull” Justice hits a low point. As she tries to get back into the ring, her life takes another twist with the arrival of her young, estranged son. With very few people she can count on, life is a fight both inside the arena and outside for Jackie. The climactic fight against a seemingly unbeatable opponent also has a surprising outcome, and the movie closes soon after on an expectant note that feels more like a beginning than an end. So what really happens at the end of ‘Bruised’? Let’s take a closer look. SPOILERS AHEAD.

The film opens in a crowded fighting arena amid Jackie’s infamous fight. She struggles to stand up against her opponent, and the match ends with the fallen MMA fighter trying to get out of the fighting ring voluntarily — a move considered devastating for a professional fighter’s reputation. We then find Jackie four years on, struggling with alcoholism while working as a maid in an abusive environment. Her manager turned boyfriend, Desi, continues to pester her into getting back into fighting but doesn’t do much to support her.

After a chance face-off in an underground fight in which Jackie reluctantly gets embroiled but nonetheless decimates her opponent, she is approached by Immaculate, the owner of a famous MMA league. He explains how she still has the skills to get back into the ring and even promises her a shot at the title, provided she stop letting Desi manage her. Hopeful, Jackie begins to plan her comeback. However, her life is turned upside down when her 6-year-old son, Manny, shows up at her doorstep.

Motherhood doesn’t come easily to Jackie, and she struggles to take care of Manny while trying to train for her upcoming match. Her boorish and abusive boyfriend makes things worse, and the single mother is forced to leave him and seek shelter with her mother, who is equally belligerent. Eventually, Jackie finds solace in her severe but caring coach, Bobbi Buddhakan, and a brief romance sparks up between them. However, the night before the fight, Jackie admits that she is not ready for a relationship, and Bobbi, a recovering alcoholic, falls back into the bottle.

Jackie is confused when her trainer doesn’t show up before her big fight. However, she goes out and faces Lucia “Lady Killer” Chavez, an undefeated MMA champion who looks ready to tear Jackie to shreds. The match is brutal, and her opponent’s explosive skills initially catch Jackie off guard. However, our heroine claws her way back into the fight and strategically uses her well-timed grapples to level the playing field.

Against all expectations, the match runs its full course of five rounds. Even the prolific Lady Killer is surprised by the supposedly rusty fighter’s tenacity and skill despite not having fought in the last four years. Eventually, the match is decided based on points, and Lady Killer wins by a narrow split decision. However, the crowd is overwhelmed by Jackie’s performance, and the film ends with her going back and picking Manny up from her mother’s flat. In the closing scenes, mother and son walk down the street hand-in-hand, carrying their belongings with them, and Manny finally utters the words “Thank you, Big.”

Hence, even though Jackie loses the big fight and doesn’t get the title, it seems like she gets what she needs. Struggling from crippling self-loathing after her devastating defeat and subsequent downward spiral, the MMA fighter finally gets the recognition and appreciation from the crowd that she deserves. At the end of the fight, even her opponent congratulates her on her abilities, and a stunned Jackie looks on as the commentators proclaim her the “People’s Champion.” Hence, she doesn’t win the title, but the match is a definite victory for our heroine.

What Happens to Manny and Jackie in the End? Who are Big and Little?

Perhaps the only one that seems to suffer more than Jackie is her young son Manny, who is grappling with his father’s death and is so traumatized by the events around him that he is unable to speak for most of the film. Even Jackie, who tries to protect him from her abusive boyfriend and mother, finds it difficult to create a safe and nurturing environment for her son.

However, the more Manny sees his mother struggling, the closer he gets to herself. Eventually, with the ten thousand dollars she gets for participating in the fight, Jackie promises to get an apartment for Manny and her. After having lived at the mercy of others for so long, this is a fitting outcome for the mother and son. The fact that Jackie says that she doesn’t know where they’re going is symbolic of the freedom she and Manny feel after being victims of circumstance for so long.

Big and Little are the nicknames that Jackie gives herself and Manny to simplify the harsh realities of life she has to explain to him. Having had a traumatic childhood herself, she reveals to her young son how she, too, felt helpless when she was “Little.” However, the nicknames are also meant to emphasize to Manny that he is not alone and that his mother, who is now “Big,” is there to protect him. At the end, when Manny calls her “Big,” he essentially acknowledges their relationship for the first time, and it is the only time in the entire film where we see him smile.

Do Jackie and Bobbi Buddhakan End Up Together?

Jackie and her trainer, Bobbi Buddhakan, have a brief but intense romantic connection. However, whereas the latter thinks it is the beginning of a relationship, the former then explains that she is not ready to form a romantic connection. Bobbi, who was married at one point but lost custody of her child in her divorce, is heartbroken and breaks her rule of not drinking alcohol.

Though Jackie and Bobbi don’t end up in a romantic relationship, a deep bond is formed between the two. The trainer reveals that she didn’t show up for the match because she wanted Jackie to realize that she could succeed on her own. The MMA fighter, now seeing things clearly without the burden of self-loathing she’s carried for so long, then hugs her trainer with a level of affection that requires no words and their deep (but platonic) love for each other is more than apparent. Though not elaborated on in the film, Jackie will likely continue what seems like an illustrious career as an MMA fighter, and it is almost certain that Bobbi will remain by her side as her trainer and friend.

Read More: Where Was Bruised Filmed?