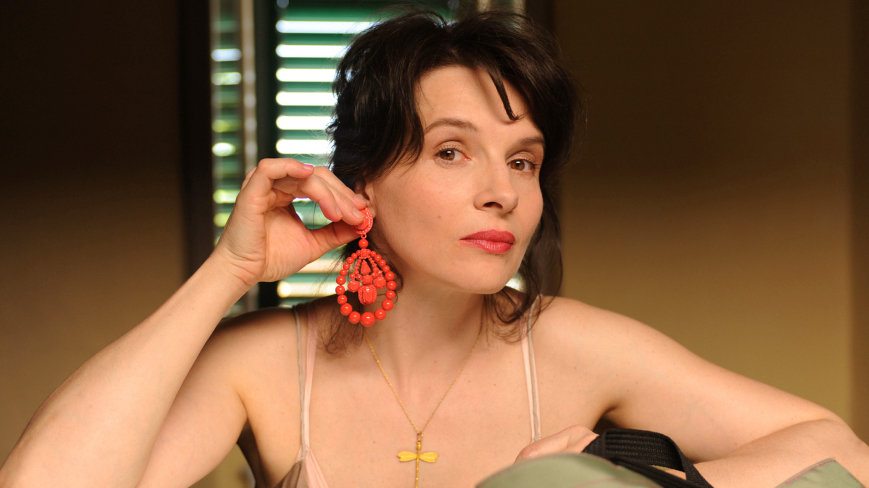 I have watched ‘Certified Copy’ thrice. The first time, I couldn’t entirely comprehend it, yet I was mesmerized. The next time, I had my friends and family over; this time I loved it even more. But to my dismay, the moment the credits started rolling, everyone began discussing the film. And by discussing, I mean deciphering. For a generation besotted by the “Christopher Nolan School of Cinema”, the movie had to make perfect logical sense. It was turned into a puzzle, where everyone was obsessed with putting the pieces together; so as to explain it all. And in the midst of it all, nobody bothered experiencing the movie, letting the emotions wash over.

Now, before you conclude that this film is some kind of mysterious suspense thriller, let me set things right. Directed by the legendary Iranian film-maker, Abbas Kiarostami, this French art film unveils over a day in the picturesque Italian town of Tuscany, where a British writer, after launching his new book, spends his day with a stranger; where emotions wobble and relationships transform as the day progresses. Released in 2010 at the Cannes Film Festival, this film opened to critical acclaim, with Juliette Binoche winning the Best Actress Award. While Kiarostami’s direction and the performance of the lead was unequivocally praised, many found the movie’s ambivalence manipulative and indulgent. So, which is it – A modern masterpiece or an overrated indulgence?

‘Certified Copy’ is one of those films which reveals its underlying theme quite explicitly (or does it?) in the first few minutes, and then goes on to illustrate the same idea in one of the most imaginative ways possible. James Miller (William Shimell) is a British author in Italy to unveil his new book (titled Certified Copy), in which he argues against the need for authenticity in art, because even the “original” is inspired — it is often a copy of something else. After the launch, Miller spends the day with a stranger (Juliette Binoche), traveling through the beautiful countryside, discussing art and life. And over the course of the day, realities blur and identities change as Kiarostami masterfully merges the idea of originality in art with the complexities of life and relationships.

Kiarostami obviously has a thing for cars! A huge chunk of the conversation between the couple take place in a car, as they aimlessly drive around the countryside, debating Miller’s work and their divergent philosophies. But, oddly enough, it works perfectly, as the close up shots beautifully capture the nervousness of two strangers attempting to strike up a conversation.  Even as the locale moves to an art museum, the conversation progresses, covering everything from parenthood to keeping things simple in life. But what is truly amazing is how Kiarostami manages to connect two different realities so seamlessly; the realism in the treatment is complemented by the surreal narrative. We are not so sure whether they are actually strangers, whether they have a past, which they are conveniently hiding, or if they are just illusions of what they actually want to be. It is never clear, and it is here that ‘Certified Copy’ transforms from a romantic drama into meditative contemplation of our identities and how they are conceived.

When a movie attempts to deal with complex themes, it is easy for the narrative to get bogged down and superficial, but Kiarostami manages to hold everything together, all thanks to a brilliant screenplay. With strong characters with deep emotional arcs, he manages to evoke genuine connect with the leads, even though we are confused about their relationship with each other. The dialogues are so organic and the long stimulating conversations help us get a feel of the characters. It is a marvel how the screenplay successfully manages to tread the fine line between the “reality” and the “perception of reality” with such flair. 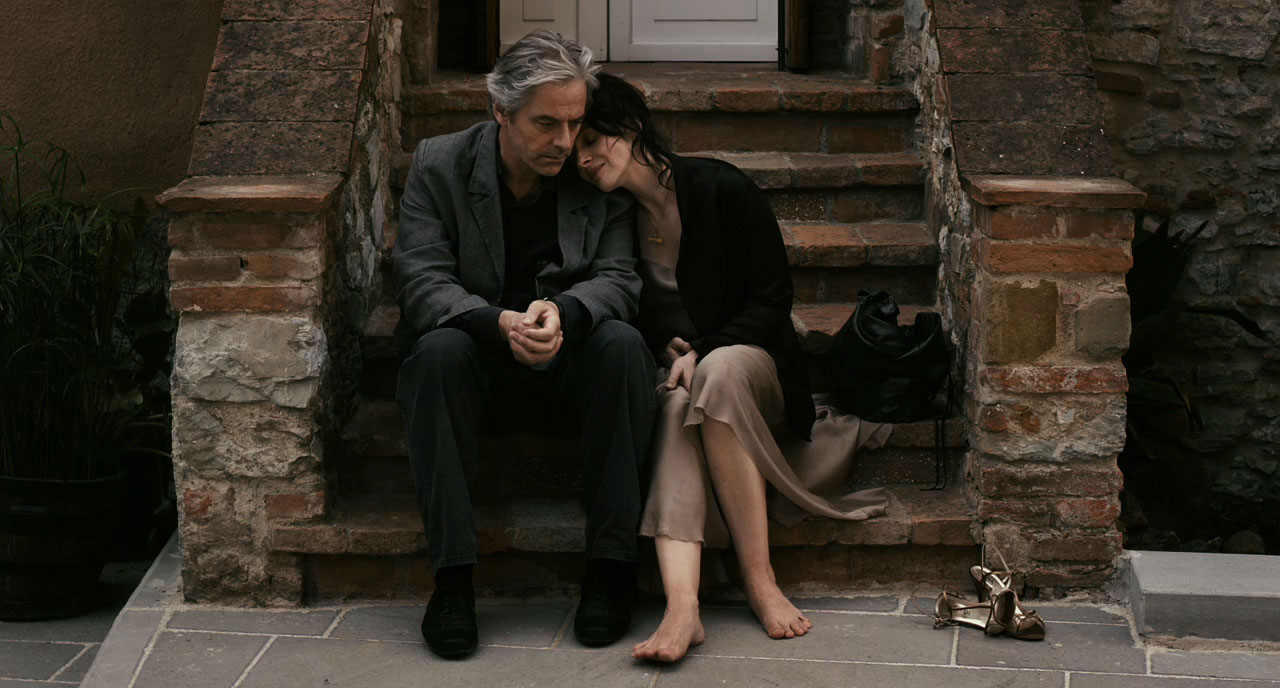 In a movie where much of the story is centered around two people, their performances become all the more important. And do they deliver! In his debut as an actor, the baritone opera singer William Shimell plays James Miller with such finesse that it is hard to believe that he hasn’t done it before. There is a venerable masculinity in his performance, which brings the nuances of Miller to life. It is a perfect debut, if there ever was one. But the star of the show is undoubtedly Juliette Binoche. In playing a multi-faceted character (she is never named), the veteran actress has displayed extraordinary depth and understanding of what is expected of her, managing to evoke an emotional response that will leave you spellbound. Her emotional fragility contrasts her fierce independence, and her unbridled romanticism and chemistry with Shimmel is a pleasure to watch. It takes enormous guts and self-belief to pull off a complex character like hers, but she does it with such eloquence, that it turns out to be one of the finest performances of the decade.

There are a lot of influences that has contributed to the film, some quite obvious, others not so much. The long, intellectually stimulating conversations are something that we have seen Richard Linklater pull off elegantly in his Before trilogy (‘Before Sunrise’, ‘Before Sunset’ and ‘Before Midnight’). Kiarostami manages to bring that into this film, but he does it in his own style that it becomes unique. For instance, a lot of characters are mentioned in extensive detail, none of them to ever resurface. A lot of artistic and philosophical ideas are delved on, but a lot of them have no overall significance. The ambiguity in the narrative is so deeply entrenched that even the primary theme of the movie and its significance to the characters can be questioned. A lot of things are left unsaid, that it helps in perfecting the duality in the narrative. Another cinematic technique employed by Kiarostami is a penchant for leaving things to the imagination. In fact, there is an extended sequence in the film where our leads are arguing over a sculpture and its significance. The funny thing is, while there are detailed explanations of the sculpture and its interpretations from both Miller and Binoche’s character, we never see it! So, we are left with two varied interpretations to try and form our opinion.

One particular movie that ‘Certified Copy’ reminded me of is the Buñuel classic ‘That Obscure Object of Desire’. The surreal masterpiece had two actresses simultaneously playing the same character, while trying to use the ideas of obsession and sexual desire to explore the then sociopolitical condition.  Kiarostami, it appears, is using the opposite to achieve the same ends. He manages to use one actor to portray two different characters in two different realities simultaneously, while attempting to explore the inner workings of the human mind. This aids in the surreal overtones in the narrative, which is ever so subtly present.

So, what is it all about? Is it just a beautiful romantic drama masquerading as a philosophical masterpiece? Or is the idea of originality and copies used to explore relationships and the human condition? Honestly, I don’t know for sure, but I am inclined to believe in the latter. It seems Kiarostami is using the idea of two intermittent realities to explore the futility of the concept of authenticity. He shows us two scenarios, both compelling and believable. So which one is real? Or which one is just a piece of the characters’ imagination? And more importantly, does the answer even matter?

It seems that I have posed quite a few questions throughout this piece, offering no answers. But, does questions always have to be answered? The beauty of art is that it doesn’t always have to be logical. ‘Certified Copy’ is not the kind of movie that will fit your narrative palette perfectly, and therein lies its beauty.  There are not many movies which manage to open up new avenues every time you watch them; ‘Certified Copy’ is one of them. At its simplest, it is a poignant romantic drama on the nitty-gritty of relationships and how it changes over years. But, looked deeply, it is also a philosophical examination of the workings of the human psyche, where nothing is authentic, we are all copies of the person we want to be. And it is this duality that makes ‘Certified Copy’ one of the finest films of the century.