Chronicle Mysteries: Helped to Death: Everything We Know

‘Chronicle Mysteries: Helped to Death’ is an interesting addition to Hallmark’s ‘Chronicle Mysteries’ series. Just like other episodic features in the TV film series, this one follows Alex McPherson, a true-crime podcast host, and Drew Godfrey, the editor of a local newspaper. The duo moves around, covering reports of local deaths and the reasons behind them.

In the ‘Hallmark Movies & Mysteries’ movie, Alex and Drew interestingly investigate a self-help retreat and the controversial life coach who oversees it. If you’re a big fan of Alex and Drew’s adventures and are looking for details about the fifth installment of the franchise, we are here to assist!

‘Chronicle Mysteries: Helped to Death’ is set in the small Pennsylvania town of Harrington. But was it filmed there? The answer is no. The movie was shot in Vancouver, just like its previous installments. It was filmed around October 2020 amidst strict lockdown protocols, which must have been a challenge for the production team. Let’s dive into details.

The movie was filmed in Vancouver, in the middle of pandemic restrictions, as its foggy, wet weather took its grip. Fall is observed to be the rainiest month in the city, which might have caused minor shooting delays. But the filming turned out to be an unforgettable experience, as stated by actor Benjamin Ayres. 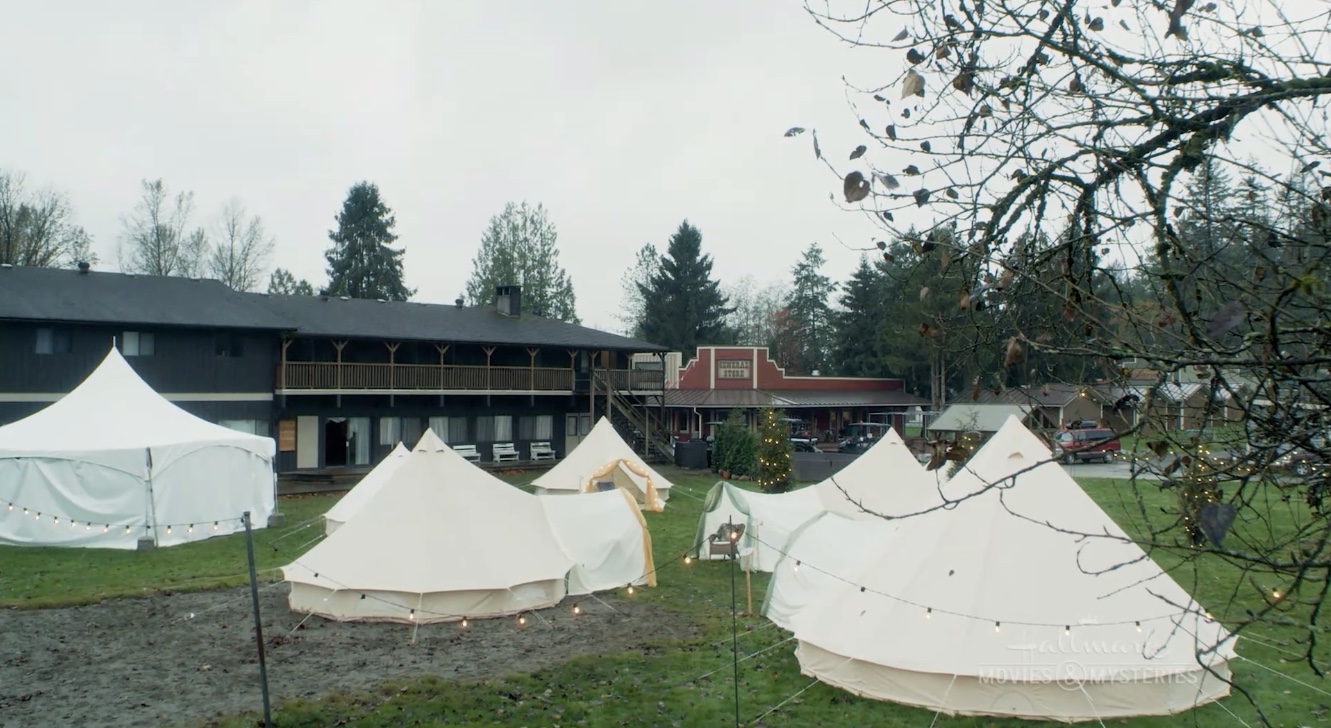 The entirety of the movie was shot in a retreat that was occupied by the crew throughout the filming period. Due to the lockdown, the place was unusually deserted, which allowed the team to spend all their days shooting within its confines. 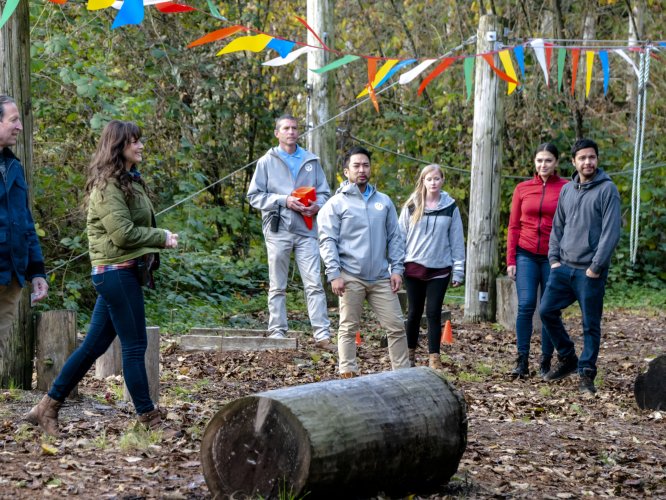 ‘Chronicle Mysteries’ have always preferred British Columbia for its soothing scenery and accommodating expanse. Other episodes in the line-up were also filmed there, without lockdown impositions that allowed extensive filming over different locations in the state. Actor Alison Sweeney posted multiple pictures on her Instagram that feature her charged up in enthusiasm regardless of the taxing weather conditions.

‘Chronicle Mysteries’ have always preferred British Columbia for its soothing scenery and accommodating expanse. Other episodes in the line-up were also filmed there, without lockdown impositions that allowed extensive filming over different locations in the state. Actor Alison Sweeney posted multiple pictures on her Instagram that feature her charged up in enthusiasm regardless of the taxing weather conditions. 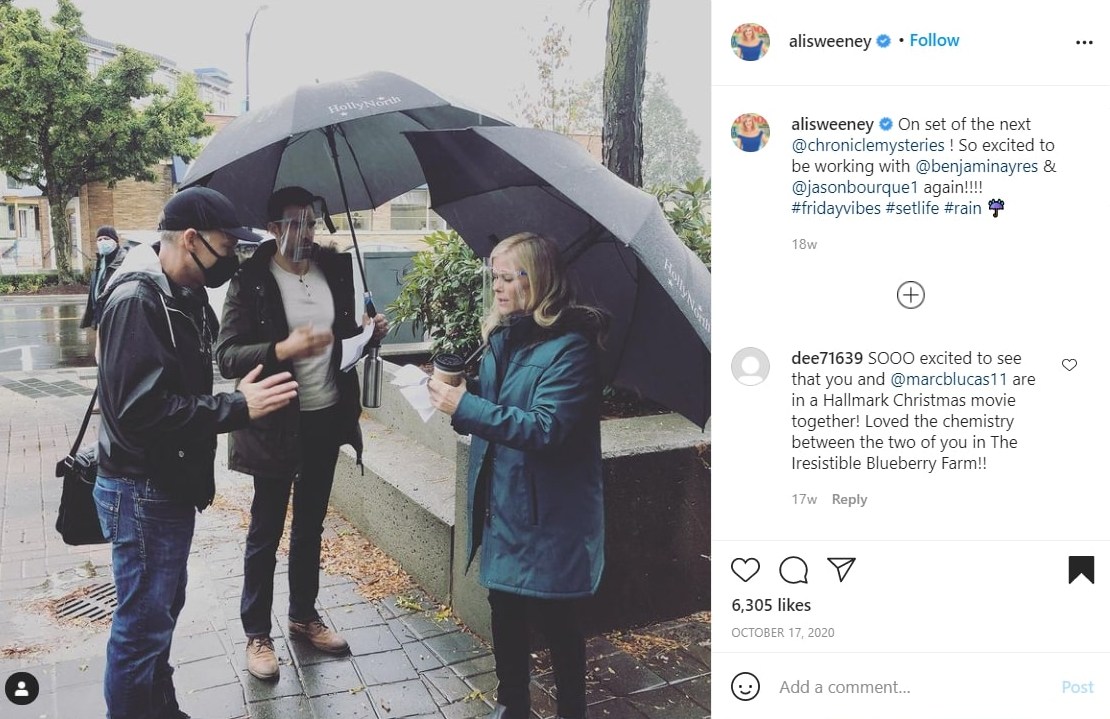 Is Chronicle Mysteries: Helped to Death Based on a True Story?

No, ‘Chronicle Mysteries: Helped to Death’ is not based on a true story. But Alison Sweeney, the creator and executive producer of the series, credited her work to true crime podcasts that have inspired her to substantiate the series. The episodic feature film follows Alex McPherson, who initially fell into podcasting as a measure to help someone find their missing child. This is how her character becomes a podcaster.

Sweeney talked about the origin of her scripts framing the series. She developed the material from scratch, which turned out to be a compilation of all the things she had heard and watched. She drew inspiration from true crime podcasts and the people who do it. As a result, Sweeney and the team always came up with their own cases for every installment. Thankfully, it worked in favor of the franchise as the it went on to garner a strong fanbase.

Sweeney’s knowledge about true crime comes from a long period of relentless podcast listening and engaging with professionals who shared relevant insights. Besides that, Sweeney’s prep-work for the franchise also showed itself in other works such as ‘Real Crime Profile,’ where she appears as a guest and also ‘Moms and Murder.’ She even talked to Esther, the podcaster for ‘Once Upon a Crime,’ and interviewed Bob Ruff, the host of a podcast called ‘Truth and Justice.’

The rest of her takeaways came from her husband, David Sanov, who’s a police officer. With him, Sweeney would have endless conversations about his cases. Although ‘Chronicle Mysteries: Helped to Death’ does not feature real-life cases, it still makes for an engaging watch, especially if you are a true-crime fan. As for regular followers of Hallmark, it positively honors what people expect from the brand and also maintains the universal appeal of its content, catering to all kinds of audiences.