Cinephiles are a rare breed of people. A normal person wanders the land looking for love, for inspiration, for regalement, for answers and for reasons; our gazes turn to the great visual art of cinema for all the above. Cinephilia may be a vocation for some (like it is for me), or it may not be for others, but cinema is a way of life for all of us. We tend to enjoy dissecting, discussing and raving about cinema as much we enjoy watching it.

But there arrive in every ardent cinephile’s life those frustrating moments, when they’re bursting to discuss the nuances of a Tarkovsky film they saw last night, but all everyone wants to talk about is the new ‘Transformers’ movie! If I had a nickle for every time someone said that the films I recommended were “slow” or “complicated”, I’d be a friggin millionaire. On the other hand, there also might be those movie buffs who revel in the mainstream popcorn cinema, but they have no one with they can nerd out about the next ‘Avengers’ film! Yet another hurdle is when your cinephilia gives way to artistic desire and you have no one to advise you on how to go bout it.

Fret not cinéastes, I got you covered. Here is a painstakingly researched step-by-step guide for cinephiles to rave, rant, socialise, learn from and make the most out of the internet, beyond the generic review sites and news blogs. Exhaustive discussions about films and filmmaking, movie recommendations, social media for film buffs – we have it all right below:

Well, since you’re reading this, you’ve already put a big green ‘check’ n Step 1! By following the right kind of pages/people on Facebook, Twitter and Instagram, you may find many faraway strangers in comment sections whose taste in cinema matches yours. Also interesting are accounts of people behind the scenes which provide an interesting insight into the craft. Case in point, I have come across more cinephiles than I have ever encountered in my entire life since I began writing for The Cinemaholic.

2. Subreddits to quench any cinephile’s thirst for exhaustive rants

Aptly called “the front page of the internet”, Reddit is a place where novelty goes to hang. This social/discussion website is for those who want an immersive conversation about things than the usual FB/Twitter babble. The site has a lot of subreddits dedicated to movies and the like. While /r/movies is the most mainstream and thus an obvious choice, there are a quite a few other niche threads catering to all kinds of cinephiles:

/r/truefilm: This subreddit delves considerably deeper than the average /r/movies fare. While some of the threads may appear pretentious, there are quite a few worthwhile discussions which crop up here.

/r/casualfilm: A subreddit that tries to find common ground between /r/movies and /r/truefilm.

/r/filmmakers: A “catch-all” subreddit for all things filmmaking. Directors, cinematographers, writers, and pretty much all technical behind-the-scenes occupations are well-represented. It also features a good balance between professional and amateur filmmaking, which is a definite plus.

/r/shortfilm: A subreddit where users can submit their own short films, as well as short films from around the web created by other filmmakers. A lot of the stuff that is posted here is subpar, but it’s a great forum to support fellow amateur filmmakers and to get your own work seen by at least a few people. I’ve been wowed by some of the shorts I’ve seen submitted here.

/r/GuessTheMovie: This is just a fun subreddit where users have to guess the film based on a single screenshot.

/r/criterion: A subreddit dedicated specifically to the boutique film distribution company Criterion. It’s a really great place to talk about films that have been released by the company that don’t usually get mentioned in subreddits like /r/movies and even /r/truefilm. It’s a small, dedicated community of mostly extremely knowledgeable and passionate cinephiles. If you own any Criterion DVDs or Blu-rays, this subreddit is a must.

Additionally, there are genre-wise threads aplenty, such as /r/filmnoir, /r/anime and so on. Also present are film and filmmaker threads like /r/stanleykubrick and /r/starwars. Go nuts! 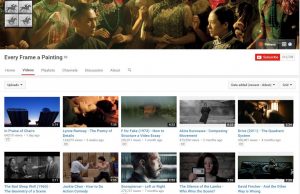 We move from the written to the visual. YouTube is a rich haven for movie reviews, recommendations, trailer breakdowns, movie news, analyses and so on. Some of the best channels for cinephile-friendly contents are:

CineFix: My favourite film-related YT channel. CineFix is wildly popular amongst filmmakers and film connoisseurs for its unique listicles and in-depth analyses. Most lists are just countdowns, Cinefix has categories where they name several films that can fit said category and they choose one that they think represents that particular category most aptly. A one-of-its-kind channel.

Every Frame A Painting: A godsent youtube channel for filmmakers, ‘Every Frame a Painting’ shows us that behind every shot is a deeper meaning that’s helping the story progress. It helps filmmakers think about film on a deeper level.

The Film Theorists: This channel explores a whole other level of film analysis; Matthew Patrick picks a topic specific to the subject of film, identifies an interesting scientific problem, and hypothesizes in the form of modestly edited video essays.

Film Riot: Film Riot is a how-to trip through low-budget, DIY filmmaking. From how to make great effects to following Triune Films through production, Film Riot explores the art of filmmaking in a comedic, yet educational way.

Cinema Sins: The sole job of the folks over at ‘Cinema Sins’ is to point out everything wrong with a film. And they do a bang-up hilarious job at it. It mixes actual critiquing with a funny analysis of goofs, plot holes, cliches, logical flaws, or other strange elements, featuring critically acclaimed as well as panned films.

Screen Junkies: Rising to fame with their rib-tickling ‘Honest Trailers’ of films and TV shows, which ridicule them by stripping their plots to a brutally honest bareness, this channel has now grown into a full-fledged, steady stream of pop-culture parody, original series and thoughtful commentary.

Channel Awesome: “I remember it so you don’t have to,” says Doug Walker, who runs a web series called ‘The Nostalgia Critic’ on this channel. He re-evaluates oldies and decodes which of them are actually good fare and which of them just appear to be good behind the veil of nostalgia. A quirky spin on the usual movie review bit.

There are places much better than IMDb’s overcrowded discussion forum where you can sound off your opinions and dissect cinema at your heart’s delight. The presence of swathes of cinephiles has led to tailor-made social websites and communities dedicated to the purpose. I have picked the most unusual ones of the lot:

Letterboxd: The amount of films I watch is a matter of pride for me. And this makes the elegant film logging and listing site one of my absolute favourites. Letterboxd lets you log the film you’ve watched, review them and because you don’t have to send a friend request, you can follow anyone in order to check out the latest movies they’ve seen, lists they’ve created and reviews they’ve written. You can add your two cents in the omnipresent comment sections and even chat with some known critics. While there are a whole lot of other sites in this category like FilmyCrave, Filxster and Seen That (and even IMDb), Letterboxd is the most pleasing to the eye, and thus a spot here.

MUBI: Formerly known as ‘The Auteurs’, this is the site for you if you lean more towards Tarkovsky than ‘Transformers’. MUBI has a hand-picked collection of international, experimental and avant-garde cinema for you to watch at a monthly subscription. It lets you create a personalised profile complete with the style of films you prefer. Additionally, the site’s social add-ons let you rate and review films, as well as post notes and follow other people. The forums too, engage in erudite discussions such as ‘Kurosawa Vs. Shakespeare’ and ‘Nihilism in Cinema’. MUBI can be dubbed as “Netflix for the arthouse fan”. Also worth a glance is MUBI’s Notebook.

iCheckMovies: For me, finishing BBC’s ‘100 Greatest Films Of The 21st Century’ brought a sense of achievement. If you share the same affinity towards conquering such lists or ones customised by you, iCheckMovies is the site for you. When you’ve completed a list, you’ll earn awards that display on your profile to show your movie-watching prowess to the world. Based on the movies you’ve seen, the site will also try to match you with people who have similar tastes so that you can easily follow their progress and discover new movies.

5. Websites dedicated towards the nuances of filmmaking

More often than not, reverent cinephilia leads to a filmmaking gig, however short-lived. Even those of us who don’t dip our toes in it are curious to know what transpires behind the scenes. Thus, the ultimate quality for becoming an internet-savvy cinephile is awareness about websites which explore filmmaking. Some of my favourite sites about filmmaking are:

Filmmaker IQ: Filmmaker IQ is one of the internet’s most exhaustive knowledge troves, along with being one of the most innovative sites imparting filmmaking wisdom out there. The site has courses on everything fro make-up tutorials to snuff films, with a competitive leaderboard and IQ points system to keep the learner psyched. It has so many intriguing quirks that even I haven’t gotten around to fully exploring it yet.

ActionCutPrint: Peter D. Marshall has survived in the Film and TV industry for over 40 years: as a Film Director, Television Producer and Creative Consultant. All his worldly wisdom has been comprehensively put together in this treasure trove of advice for budding filmmakers.

David Bordwell’s Official Website: David Bordwell is the co-author of Film Art: An Introduction, which is a worthy read for anyone interested in knowing more about the medium. His website runs an ongoing blog named “Observations On Film Art” which has some very perceptive musings on cinema and is one of the most astute film blogs out there.

Go Into The Story: As an aspiring screenwriter, a lot of my time on the internet is spent here. Blogger Scott Myers, a screenwriting professor at the University of North Carolina, is an interactive advisor. He conducts various series, such as ‘Scene To Story’, ‘A Screenplay A Day’ and ‘Daily Dialogue’, A must-have bookmark for any wannabe screenwriter.

No Film School: In addition to their interviews and discussions with filmmakers of all moulds, the folks over at ‘No Film School’ do the noble job of curating the most useful content from across the vast reaches of the internet. The content range from incredible super-cuts, video essays, to infographics, on the subjects that range from filmmaking, cinephilia, to film theories.

RocketJump Film School: Ryan Connolly, the dude behind ‘Film Riot’, is one of the many film school graduates behind RocketJump, which has numerous filmmaking tutorials, podcasts, interviews and behind the scenes looks. The site is handily divided on the basis of vocations such as directing, editing & post, producing, arts & vanities and so on. One of internet’s greatest free outlets of filmmaking information served on an innovative platter of casual of conversations.

Well, there you have it. Now go use the internet to the fullest and make me proud!