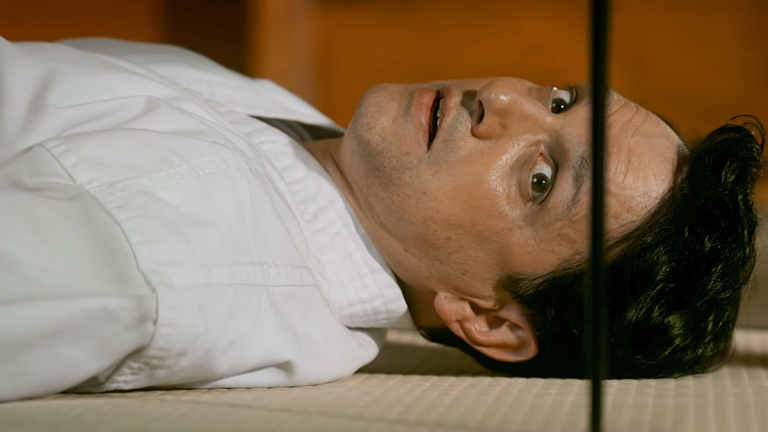 In its 3rd season, ‘Cobra Kai’ continues to expand on the world of ‘The Karate Kid,’ introducing ideas and concepts that were never supposed to be a part of the campy 1980s film series. It could have been catastrophic if it weren’t done correctly. Fortunately, the showrunners are well aware of what they are doing and how to accomplish it.

In episode 5, Daniel’s (Ralph Macchio) visit to Okinawa Island continues as he encounters an old enemy. In the US, Robby (Tanner Buchanan) has to defend himself at the detention center. At the same time, Miguel (Xolo Maridueña) begins his journey on a long road to recovery with Johnny’s (William Zabka) help. SPOILERS AHEAD.

In episode 5, titled ‘Miyagi-Do,’ Kumiko (Tamlyn Tomita) arranges a meeting between Daniel and Chozen (Yuji Okumoto). The last time these two saw each other, Chozen was threatening to kill both Daniel and Kumiko. Daniel had to accept his challenge for a duel and fight him to the death. But after Daniel defeated Chozen, the former just honked the latter’s nose, just like he had seen Mr. Miyagi do to Kreese (Martin Kove) earlier. Robby rebuffs Kreese’s attempts to recruit him and has a brawl with three other inmates. Johnny devotes himself completely to Miguel’s recovery, helping the boy with his characteristic gruffness.

When Daniel expresses his reservations about meeting Chozen again, Kumiko correctly points out that it has been a long time since Daniel and Chozen became enemies; a lot has changed since then. She leaves them together, and Daniel has no choice but to interact with a man who nearly killed him once. But as the episode progresses, the similarities between them are accentuated. After all, both of them are practitioners of the Miyagi school of karate.

After a sparring session, which ends with Chozen defeating Daniel and honking his nose, the tension between them simply evaporates. Chozen, who is a sensei himself, helps Daniel learn new techniques. As a parting gift, he gives his American counterpart one of the Miyagi scrolls, officially recognizing him as a part of the Miyagi legacy.

During his visit, Kreese notices the bruises on Robby’s face and tells him that Miyagi-Do’s defensive karate will not work in the detention center, urging him to strike first. Robby takes this lesson to heart. The next time, he doesn’t wait for an attack but starts a brawl instead. The correctional officers eventually intervene, forcefully separating Robby and his worst tormentor apart. But as neither of them says anything to the officers, a camaraderie is formed between them.

Tired of the constant bullying from Cobra Kai, Sam (Mary Mouser) and other former students of Miyagi-Do decide to fight back. Early in the fight, Sam, Demetri (Gianni Decenzo), and the rest gain the upper hand. But then, Tory (Peyton List) arrives, and Sam has a panic attack. Although Sam won their last encounter, it clearly has left deep wounds in her mind. She discovers that she can’t move and watches helplessly as Eli (Jacob Bertrand) breaks Demetri’s arm. Later, when Amanda (Courtney Henggeler) sees how terrified her daughter is, she realizes that Daniel has been right about Cobra Kai all along. She pays Kreese a visit, slaps him, and threatens to shut him down.

The Healing Properties of Heavy Metal

Carmen (Vanessa Rubio) makes it very clear to Johnny that she has let him be a part of Miguel’s recovery process because that’s what her son wants. If it were up to her, Johnny wouldn’t be here. These warnings don’t seem to have much effect as Johnny constantly mocks Miguel’s new-age physical therapist.

Johnny tries some incredibly unconventional methods to get his star and only pupil to walk, including setting the boy’s foot on fire. When nothing works, Johnny takes the boy to a heavy metal concert. All of Miguel’s fear and anger get dismissed in the loudness of the music. Soon enough, his feet start moving of their own accord. When Johnny and Miguel notice this, they are overjoyed. Miguel has finally regained sensation in his feet.

The last time Daniel was in Okinawa, he saved a young girl named Yuna during a typhoon. Arranging a meeting between her and Daniel becomes Kumiko’s final gift to him. Yuna is now the Senior Vice President of Sales for Doyona International. She promises Daniel that she will help him with his business. It ultimately comes down to the simple philosophy that people like Mr. Miyagi and Kumiko’s aunt, Nobu McCarthy, followed in their lives: “Put good out into the world and… good will come back to you.” Daniel’s salvation comes in the form of a girl he rescued three decades earlier.