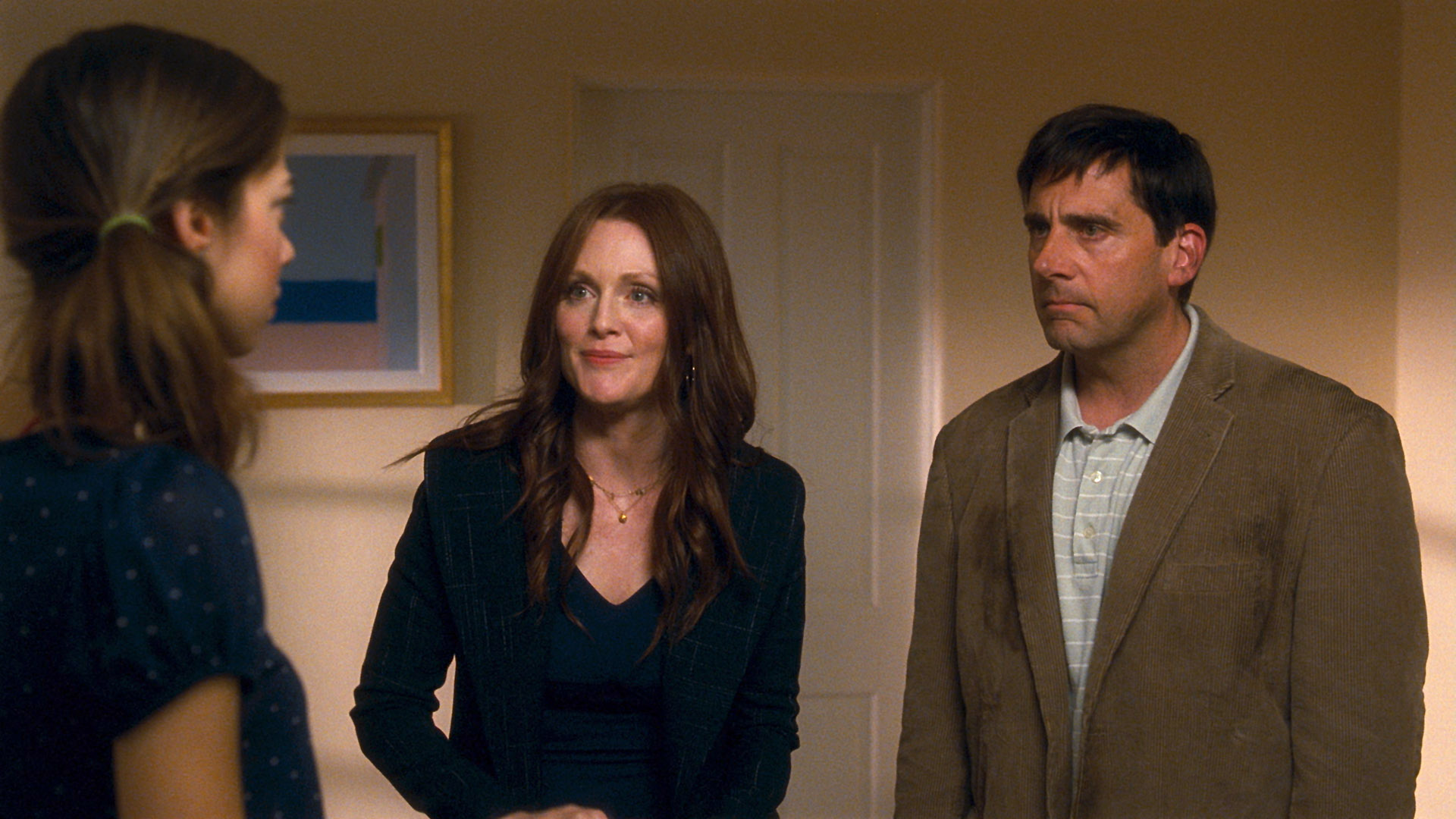 Directed by Glenn Ficarra and John Requa, ‘Crazy, Stupid, Love’ is a romantic comedy film that revolves around a middle-aged man who has recently separated from his wife. At a bar, he strikes up a friendship with a serial womanizer who teaches him to seduce women. It is written by Dan Fogelman and features a star-studded cast including Steve Carell, Ryan Gosling, Julianne Moore, Emma Stone, Marisa Tomei, and Kevin Bacon.

The film is exceptionally witty, and the entire cast delivers impressive performances, but Carell and Gosling’s bromance particularly stands out. Towards the end of the film, an interesting reveal shakes up the dynamics between the main characters and leads to a climax that demands a few explanations. If you have questions about the ending of this film, we can likely provide a few answers. SPOILERS AHEAD.

Cal Weaver (Steve Carell) is a middle-aged man whose life turns upside down after his wife Emily (Julianne Moore) tells him that she wants a divorce. Emily reveals she cheated on him with a co-worker, David Lindhagen (Kevin Bacon), and no longer wants to be with Cal. Following the devastating reveal, Cal moves out. Meanwhile, Cal’s thirteen-year-old son, Robbie, proclaims to be in love with Jessica, a seventeen-year-old girl who babysits him and his younger sister.

At a bar, Jacob Palmer (Ryan Gosling), a serial womanizer, is turned down by Hannah (Emma Stone). Feeling sorry for himself, Cal goes to a bar night after night, talking loudly about his wife’s infidelity and their impending divorce. Jacob notices him at the bar and takes pity on Cal, offering to teach him how to seduce women. Eventually, Cal picks up a woman, Kate (Marisa Tomei), at the bar. Following his hook-up with Kate, Cal manages to seduce other women successfully.

Elsewhere, Hannah, a recent law school graduate, expects her boyfriend Richard to propose, but he does not, which breaks Hannah’s heart. Hannah goes to the bar she first met Jacob at and kisses Jacob passionately after having previously rejected his advances. Shortly after, Hannah and Jacob start dating. Towards the of the film, all these stories converge and create tension between the characters. Eventually, all the conflicts are resolved, and love prevails.

In the film’s climax, Emily, Cal, Jacob, Hannah, Jessica, and her parents attend the 8th-grade graduation ceremony. Robbie is the salutatorian and gives a speech in which he states that he no longer believes in true love and soulmates. Seeing his son’s pessimism makes Cal interrupt the speech. He composes himself and gives an inspiring speech about the beauty of true love. Cal recounts how he fell in love with Emily and genuinely believes Emily is his soulmate. He promises never to stop trying to win Emily back.

After graduation, Emily and Cal have a little chat. They share a laugh about the crazy year they’ve had and admit both have done some stupid things but are both glad they met each other all those years ago. The film ends with Cal and Emily laughing hard, both happy in each other’s company. So does this mean the couple has reconciled? The last scene does seem to hint that it is possible.

In the very first scene of the film, we learn that Emily wants a divorce from Cal. But throughout the film, we can sense that she feels guilty for cheating on him and hasn’t stopped loving him. Similarly, Cal tries to move on with his life by seducing multiple women. However, he soon realizes that he is still in love with Emily and wants to try and win her back. The entire course of events is kicked off after Emily begins to question her feelings for Cal.

Emily’s decision to divorce Cal, in turn, makes him question his feelings. After dealing with some crazy situations and doing some stupid things, both realize they make each other happy. Although the film doesn’t confirm if they get back together, it doesn’t really matter. The last scene makes it pretty clear that Cal and Emily both still love each other, and if films have taught us anything, it’s that – Love is all we need.

What Makes Cal Change His Mind about Jacob?

In the aftermath of the crazy brawl with David, Jacob, and Bernie, Cal makes it pretty clear that he disapproves of Hannah’s relationship with Jacob. He forbids Hannah from seeing Jacob and refuses to speak to them as long as they continue to see each other. But in the closing moments of the film, Cal wholeheartedly accepts Jacob and his relationship with Hannah, which raises the question: What made Cal change his mind?

A few days after the brawl, Cal receives a visit from Jacob at the bar. Jacob tells Cal that he is really in love with Hannah. After meeting her, he has begun to re-evaluate his life. As a result, he has left his womanizing past behind. Cal admits that he is happy for Jacob as a friend. He adds that he is glad Jacob has found love which has changed his life but having seen Jacob’s former lifestyle, he will never approve of Jacob and Hannah’s relationship.

Jacob accepts this and praises Cal for being a great father. He says that he respects Cal and doesn’t harbor any ill feelings towards him. This interaction is emotional on so many levels that it forces Cal to rethink the situation. Firstly, the very lifestyle Cal condemns Jacob for is the lifestyle Cal also accepted briefly. Therefore, he probably realizes he cannot be objective of Jacob’s past now that Jacob has changed.

Moreover, Jacob proves that he truly loves Hannah and has immense respect for Cal as a friend. Jacob cares for Cal, evidenced when he punched David for hurting his friend. Cal realizes that Jacob cares about their friendship. Lastly, he understands more than anyone that true love is hard to find. Seeing Jacob fight for his love respectfully and not willing to stand between his daughter’s happiness, Cal eventually relents and accepts Jacob and Hannah’s relationship.