While I have expressed my overview of what I felt about the French counterpart of this 12 episode anthology series on criminal investigations, this one is going to be about the German part of it: three episodes each dealing with a different criminal in question. ‘Criminal: Germany’ changes a lot of the game’s rules when compared to ‘Criminal: France’, and plays it quite differently in almost each of the aspects, right from the investigating officers and their backstories stitching it all together, to the nature of the cases and the criminal’s involvement in all of them.

I began by drawing parallels to the seminal psychological understudy ‘Mindhunter’, also on Netflix, but here, the comparisons are going to be a little blurry, primarily because the German version takes it up a notch, especially with respect to how twisted the cases are, and to what degree the person in question is involved in the crimes. The final episode especially is a knockout. It starts off slow, but has a winning performance from Nina Hoss, chewing up every scene that she is in. More on that later, but for now, we attempt to delve into the narrative of the individual episodes.

Without a doubt, the most-twisty episode I saw between the two, but not in a sense that would take you for a ride. It starts off slow, with an empty floor, presumably in the early hours of the morning. Rain drips against the window panes of the station, and there is remarkably less “life”, as if to intentionally make the viewer aloof. Similar is the state of mind of the accused, Jochen Muller, brought in for questioning, who until the interrogation hits him has little to no idea what he is there for, or atleast on the surface. ‘Jochen’ is particularly interesting in the way that it derives its story from nearly 30 years ago, right near the fall of the Berlin wall.

It is found that the person in question’s earliest owned property in then East Berlin was up for reconstruction, and the decomposed skeleton of one Jens Krahl, who seemingly has ties with Jochen when he was building his fortune in East Berlin, purchasing property for shillings of their cost, owing to the huge economic disparity between either side of the wall. It is revealed that Jens Krahl was called to carry out renovation and refurbishment works for Jochen’s new property, and that he is the only person to have seen Jens alive before he mysteriously vanished in 1991.

The needles of suspicion points straight towards Jochen, who is known to the police to have been involved in homosexual relationships and substance abuse from his newly acquired fortune, before he settled with his wife and three kids in the west. The police assume that Jochen was involved in the killing of Jens owing to the latter dismissing his sexual advances, further cemented by the visible guilt a teary eyes Jochen feels when showed the image of Jens’ mother who passed away some years after Jens vanished, but lived an impoverished life in the hope that her son would return one day. She is known to have received some money from an anonymous benefactor periodically, revealed to be Jochen, later also paying for her gravestone and flowers.

The police seem right on the verge of a confession along the lines of what they believed, until in a private conversation with officer Schulz, “Jochen” turns the tables on them, revealing himself to be the real Jens Krahl, confessing that the real Jochen Muller was a young, wasteful man who riled in vanity and passed away of a cocaine overdose in his bathroom while Jens was still tending to renovating his house. He reveals that he took up his identity when his current wife showed up n his doorstep to demand flour, thinking him to be the real Jochen. The two fell in love, and “Jens” took on Jochen’s identity, presumably his money too, toiling for thirty years ahead to build his fortune and reputation. 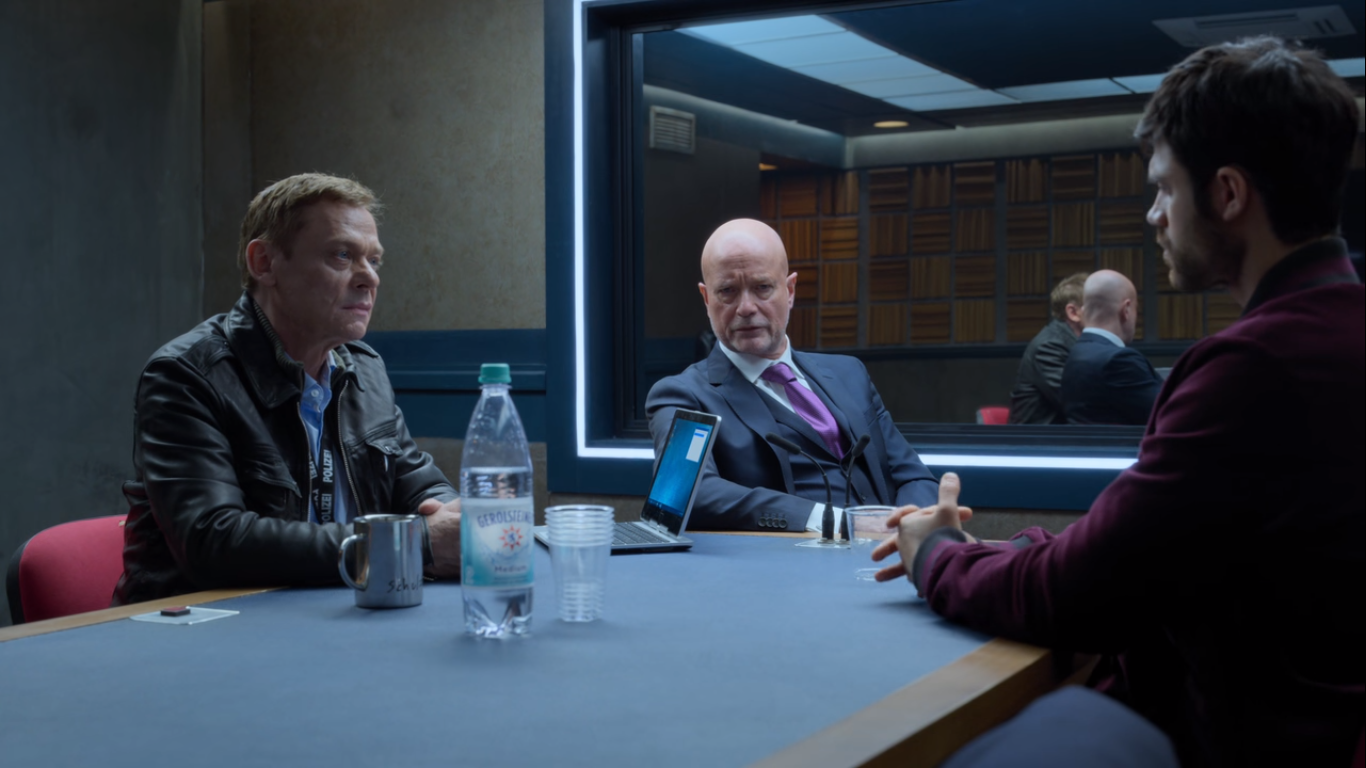 Compared to the other two episodes, ‘Yilmaz’ plays it pretty straightforward. The young, married daughter, named Johanna, of a German big shot, Christian Millberg, has fallen to grievous injury by presumably slipping on the stairs of the house. The police suspect foul play based on the call they receive from the nanny, and immediately call in her young, Turkish husband that the father in law doesn’t approve of, Yilmaz Yussef. The way the second episode really starts pulling some wires is by primarily introducing a strong, dominant figure in the accused’s lawyer, Dr. Marquardt, who counsels him on staying silent and letting him answer all the questions on his behalf. He seems to be completely overrunning the interrogation by cutting the answers short and no longer than absolutely necessary.

However, Officer Nadine Keller is able to break into his vulnerable side by sensing that his son’s estranged custody was a sensitive issue for him, and he finally begins talking. Numerous clues including the nanny’s sudden disappearance and an episode at Leo, their son’s school earlier in the day, and none of his alibis checking out, point to Yilmaz’s involvement in the incident, and a possible case of domestic abuse. After the neighbours too check in with the fact that the couple fought during late hours, Yilmaz confesses to it on his lawyer’s counsel who suggests that Yilmaz spend a year in jail for the charges of domestic violence rather than the “truth” come out, the truth that the officers can sense and are after.

The truth for defending which Christian hired Dr. Marquardt to defend Yilmaz despite knowingly disliking him. The same truth that is revealed when the doctor operating on Johanna sends in incriminating evidence against Yilmaz: marks of injury and cuts on his left arm that he refuses to showcase, stringently reinforced by Marquardt as well, but evidently explaining that it was indeed Yilmaz who was at the receiving end of that domestic abuse, citing the reason that Johanna wasn’t able to adjust well with Yilmaz and his lower economic status, despite Yilmaz thinking the world of her. The episode ends on a rather interesting note with no fixed resolution, especially since the last bit of the conversation in which the truth is revealed was off the record.

Easily the best among the six episodes of the anthology I watched today, and by miles. Completely uncharacteristic, different, and riveting in equal measure. What’s particularly interesting here is that the person brought in questioning has already spent 20 years in incarceration for heinous crimes she partook in, including luring in six girls for her husband to sexually assault and ultimately murder. Her ties with Schulz go back 20 years, with Schulz being the arresting officer, and offering care and support for the mother of Melanie Weiss, the first girl that was the duo’s victim. She has been brought in for questioning once again since she agrees to disclose the location of the remains of Melanie Weiss, whose dying mother’s last wish is to give her a proper burial, in return for getting a chance to see or talk to her daughter that she birthed while into her jail sentence, herself.

While she initially doesn’t seem to budge, she seems to be more talkative and open towards pregnant officer Keller, who gives her false information on her daughter in exchange for the confession that she partook only marginally in the murders, while her husband committed them. However, she refuses to reveal the location of Melanie’s buried remains until she is shown a picture of her daughter, at which juncture, Keller reveals that all the information supplied to her was false and that the police couldn’t help her further.

Angered, she kicks the table towards Keller who is hurt in her pregnant belly, leading to Claudia immediately being restrained. Seeing the situation get out of hand, Keller, assuring Schulz that she was fine, offers him a chance at redemption by letting go and stop being angry with himself. In turn, Schulz shows Claudia a picture of her daughter that she wanted named Maria Magdalena. The episode does a great job at this moment of warming you up to her emotions as a forlorn mother, even if you know that the things she has done, including her current stint, are horrible. She is eventually overcome and reveals the location of where she found Melanie’s bike a year later when she went for a picnic there with her husband.

All seems well and the team dissipates on good terms for the day, until Officer Keller feels something uncomfortable, presumably in her belly while she is alone in the lift. The screen cuts to black at a brutal moment when she looks down and sees something horrific evidently. Although it would be absolutely tough to imagine and think of, especially given the happenings of this episode, my guess is that the hit from Claudia did injure her internally, and what we may have at our hands could be a Revolutionary Road like situation. Fingers crossed, if this is to be explored in the second season. 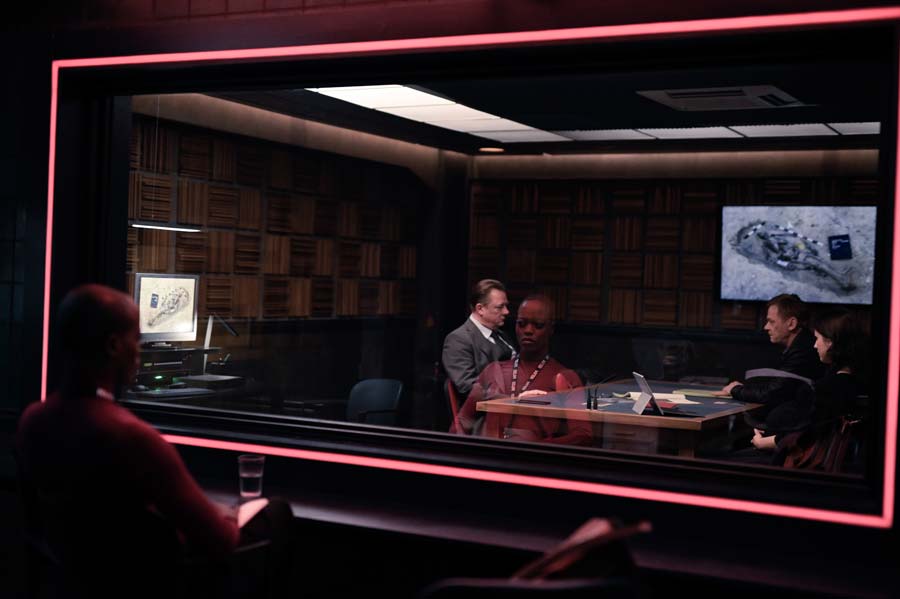 The setup remains the same: the same four walls and the same interrogation room. The same glass window with officers prying on your every move and word. The same lobby, and the same coffee and vending machine. Yet still, stepping into ‘Criminal: Germany’ from France made me feel a little uncanny. Surely and agreeably, the characters, at least those on the side of the law, in the France version were more likeable, and their stories comparatively less laden with weight.

Contrarily, the German version, plays out in a very different manner, with characters seemingly and visibly burdened with the toll this job seems to have extracted out of them. Expectedly in that sense, the first episode unfurls like a lavish character study, the second plays by the rules with a few tweaks here and there, and the third one is rested with the responsibility to pull some wires and get real serious, talking of dark, irredeemable crimes: the works of truly sick minds. In the process, our officers too are led through the arc of redemption.

Compared to ‘Criminal: France’, admittedly so, the investigations here feel a little dry, less audio-visual aid involved and seem to involve lesser on-ground investigation and more logical conclusion finding and conversation, but carry more emotional weight, especially the finale, ‘Claudia’ that I have been in deep appreciation of since the beginning.