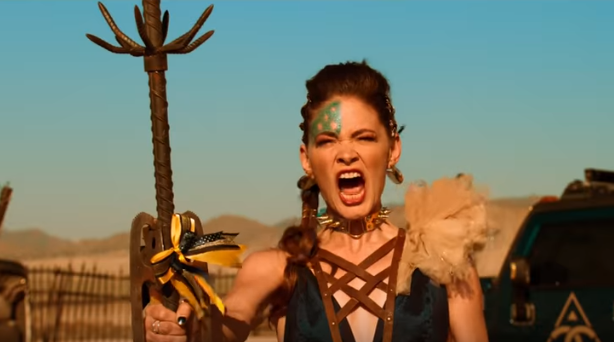 ‘Daybreak’, the upcoming post-apocalyptic dramedy at Netflix, has dropped its first trailer. It attempts to envision a unique scenario where we see high school students dealing with a post-apocalyptic world. The series stars Matthew Broderick as the principal of a high school that has all the cliched teenage tropes like jocks, gamers, and inevitably nerdy kids.

The official synopsis of the series reads, “Following an eclectic group of survivors as they navigate this strange and treacherous world, ‘Daybreak’ is part samurai saga, part endearing coming-of-age story, and part Battle Royale.”

Apart from Broderick, who appears in the role of Glendale High School Principal Michael Burr, ‘Daybreak’ also includes Krysta Rodriguez, who appears as the biology teacher, Colin Ford, who plays the role of the 17-year-old relatable teenager Josh Wheeler, who ultimately becomes the hero, and Sophie Simnett as Sam Dean, the most admired girl at the Glendale High school. Other cast members include Austin Crute as Wesley Fists, a contemplative samurai, Alyvia Alyn Lind as Angelica Green, a highly unstable genius kid, Cody Kearsley as the bloodthirsty leader of a team of jocks, Turbo Bro Jock, and Jeanté Godlock as his badass right-hand woman, Mona Lisa. Rounding out the cast is Gregory Kasyan as Eli Cardashyan.

Aron Eli Coleite, Brad Peyton, and Jeff Fierson are on board as the executive producers of the show which has been created by Peyton and Coleite. Reports have mentioned that Broderick and the cast will be present in person for the world premiere screening of ‘Daybreak’ that is scheduled to take place on October 4, 2019, at the New York Comic Con.

The trailer shows Principal Burr reaching out to the students on an average school day. Against the backdrop of these morning announcements, we are introduced to the different kinds of high school students who are present at Glendale High. There are glimpses into how they turn out in the post-apocalyptic world, and the sense ‘Daybreak’ tries to portray is that the student distinctions remain somewhat the same. The jocks and cheerleaders have their own groups, while the loners have to band together. That being said, we are shown an ominous mushroom cloud that is visible on Homecoming night. After that, everything goes crazy as the students have to fight for dwindling resources after society has broken down. There are some reminders that Broderick, who plays Burr, was once Ferris Bueller. ‘Daybreak’ has some references to popular post-apocalyptic movies, specifically ‘Mad Max‘. There are glimpses of the violence unfurling as we are introduced to cheerleaders we would not want to mess with. We also see our protagonist, who sees himself ‘crushing the apocalypse’. With upbeat music, the ‘Daybreak’ teaser proves that the apocalypse can be fun.

Check out the teaser below. ‘Daybreak’ releases on Netflix on October 24, 2019.