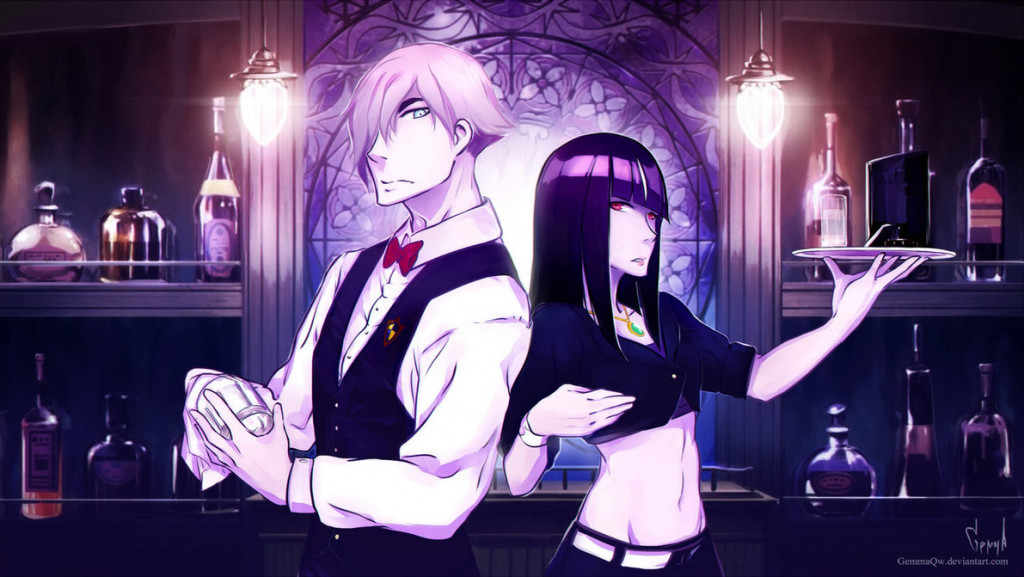 Death Parade (also known as Desu Parēdo in Japanese) is a psychological anime television series. If you thought that games like air hockey, darts or bowling are lame, then it’s time for you to think again since games like those will decide your fate after death in this anime. Welcome to the afterlife in the world of ‘Death Parade’ where only a bar separates your soul from falling into the void or entering the cycle of reincarnation. The bar’s master is decim, the arbiter of the afterlife who puts every pair of dead individuals against each other in a game. The winner will enter into the cycle of reincarnation but the loser will fall into the void. But then comes a character who will make him question his ways of ruling the afterlife.

Created, written, and directed by Yuzuru Tachikawa, the show spawned from an anime short film called Death Billiards, which was released on March 2, 2013. A couple of years after the movie’s release, Season 1 of Death Billiards made its way to viewers’ screens on January 10, 2015. Since then, fans of the show have been waiting to hear news on a second season. Here’s everything we know about the prospects of Season 2 thus far.

Death Parade Season 2 Release Date: When will it premiere?

Death Parade season 1 premiered in Japan on January 10, 2015 and it ran till March 28, 2015. Subsequently, in 2016, it was reported that Madhouse, the studio behind the show, had decided to make a second season, to be released sometime in Fall 2017 or early 2018. However, more than a year has passed since then, and there has been no news on what fate befell the show.

Thus, as it stands, it appears that Season 2 has been put on hold, and might not come out at all. Or, the show might be in production and would probably come out soon. Who knows, Death Parade season 2 might even release in 2020. But since there’s no information on what went wrong, there’s no point in speculating. We’re keeping our ears open for news on Season 2 of Death Parade, and we’ll update this section as soon as we hear something concrete.

For those who like watching anime shows in English, the good news is that Death Parade has a great English dub done by talented voice actors. If you want to watch the show in English, you can find dubbed episodes on Funimation, Crunchyroll, and Amazon.

Death Parade has a rather unique premise wherein those who die are sent to mysterious bars run by bartenders who serve as the arbiters of souls. In these bars, the deceased have to engage in Death Games with the arbiter, and a deceased person’s performance in the games decides whether he/she will be left in the void or reincarnated.

In this backdrop, the show focuses on one such bar called the Quindecim and its bartender, Decim, whose role is to judge the souls who are sent to his bar. Each episode has different characters who are sent to Decim’s bar, and Decim then engages in Death Games with the character before judging his/her soul.

Whenever someone arrives at the Quindecim, Decim greets the person cordially and invites him/her to play a game with him. Although everyone appears startled at first, they eventually agree to play, as their memories are sealed off and they have no other option. However, there are certain rules which have to be adhered to while playing these games. Firstly, Decim cannot tell them where they are. Secondly, the game which Decim will play with someone is chosen by roulette and hence it’s a matter of chance which game gets chosen. Thirdly, both Decim and the other player have to stake their lives on the game. Lastly, neither Decim nor the other player can leave until they finish the game.

Although the deceased have their memories sealed when they start playing the game, their memories resurface while playing, often leading to many emotional responses. While some suffer from emotional breakdowns, others buckle under pressure. In some cases, players also become violent. Of course, the point of the games is to bring out the worst in people so Decim can judge their souls, and regardless of the game which is being played, the games serve their purpose well.

While Decim is a veteran at his job, and judges all the souls who pass through the Quindecim, his life takes a bizarre turn when he meets a curious black-haired woman. The meeting fazes Decim, and he starts to question his own rulings.

Owing to the format of the show wherein each episode focuses on a new character who is judged, Death Parade has dozens of characters. However, there are only two main characters, and a few important supporting characters. Below, we’ve given you brief backgrounds on each of these characters.

Decim: The main character in the show, Decim is one of the seven arbiters of souls who run the aforementioned mysterious bars. The bartender of the Quindecim, Decim looks like a pale, emotionless man but is always cordial to those he is about the judge. One of the overseers of the Death Games, Decim is someone who is a veteran, and he’s very professional at his job. While Decim seems like a very detached person, he has one hobby – making mannequins which resemble those who he has already judged.

Chiyuki: A woman with no memory of her past, Chiyuki, throughout most of the show, is simply referred to as the “black-haired woman”. She is shown to be Decim’s assistant at the Quindecim bar, but unlike her cool and composed boss, Chiyuki displays human emotions openly, is an opinionated woman, and has a short-temper. Later in the show it is revealed that Chiyuki started working for Decim after he failed to judge her soul.

Ginti: Another arbiter of souls, Ginti runs a bar called Viginti which is situated on the 20th floor of the tower which houses the Quindecim. Ginty, like Decim, also frequently oversees the Death Games.

Castra: A logistics person, Castra is an arbiter who monitors deaths across the world and decides which souls are sent to which arbiters.

Quin: A member of the information bureau, Quin is also an arbiter, and used to be the bartender at the Quindecim before Decim was given the responsibility.

Oculus: Another arbiter, Oculus is an alleged god, but he spends most of his free time playing galactic pool.

Clavis: Also an arbiter, Clavis is the elevator man of the tower, and is almost always seen with a smile on his face.