Desperate Widows: Everything We Know

Directed by Lane Shefter Bishop, ‘Desperate Widows’ is a Lifetime Original (earlier titled ‘Mommune’) that centers around a widow uncovering a human trafficking ring while staying at a commune for mothers. The woman, recently widowed, decides to start fresh by entering the commune with her daughter. But they realize that the Mommune’s owner is the corrupted leader of a black market human trafficking ring. The protagonist must now fight to protect herself and her daughter at all costs. With ‘Desperate Widows,’ Lifetime brings in another thrilling watch that is sure to get your heart racing. In case you’re looking for more details, here’s everything we know about ‘Desperate Widows.’

The movie was filmed in the summer of 2020. Since the production team suffered major shifts in the schedule during the pandemic, the filming took a long time to wrap up. But it successfully finished shooting on September 18, 2020. Lifetime movies are notoriously known for being reticent about their filming sites, which is why not much is known about the movie. But its director and producer Lane Shefter Bishop is associated with Vast Entertainment, which is a Los Angeles-based production company. The movie was filmed entirely on location in Santa Clarita, which is a city just north of Los Angeles. Let’s dive into more details!

Principal photography for ‘Desperate Widows’ was done in the beautiful, sunny city of Santa Clarita, California. One of the best things about this beachy city is its varying geographical terrain. It houses different natural structures such as low mountains, beaches, coastal plains, and deserts. The movie mostly comprises outdoor locations that are situated in the heart of its natural landscape. Due to the Covid-19 lockdown, production was shut down in March 2020, three days before the actual completion date. 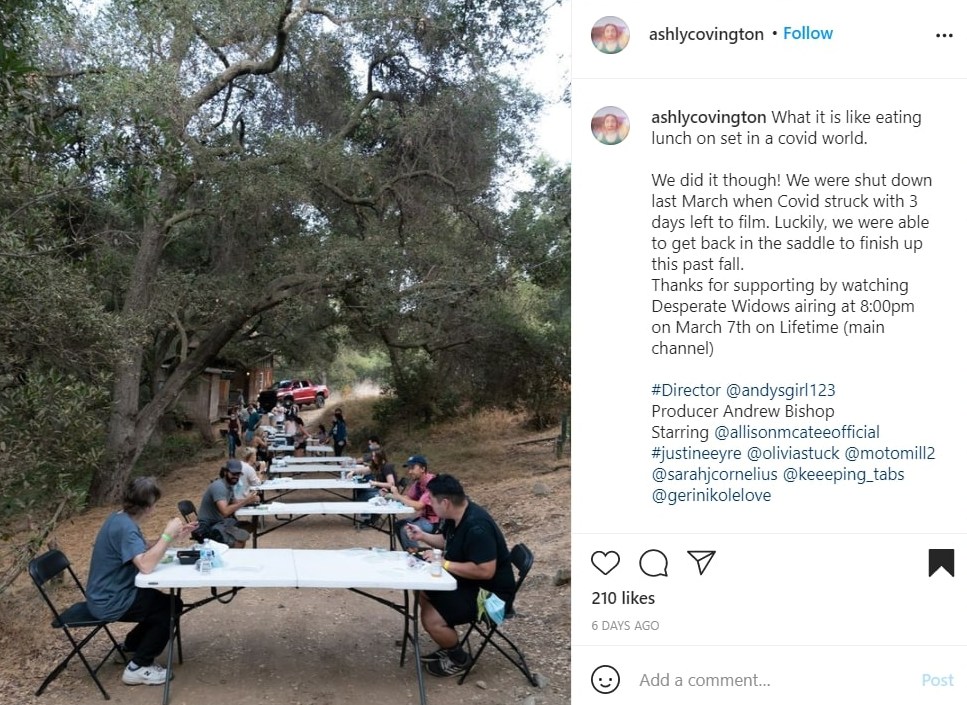 But a few months later, filming resumed, and the team was able to wrap it up in fall 2020. The second phase of filming included severe restrictive measures, and there were tests conducted very frequently. Crew member Ashly Covington posted several on-location pictures featuring other cast and crew members clad in masks. Although their faces are hidden behind safety gear, Ashly shared that they had a good time on-set.

The film features Justine Eyre as Page, a widow seeking shelter in the “mommune.” The actor is known for her roles in ‘Planet Ibsen,’ ‘Mad Men,’ and ‘Two and a Half Men.’ Olivia Stuck essays the role of Allie, Page’s daughter. Olivia’s previous works include ‘Girl Meets World, ‘Las Vegas,’ and ‘The Outfield.’ Allison McAtee also stars in the movie. You may recognize the actor for her roles in ‘Bloomington,’ ‘Over Easy,’ and ‘Iron Man.’ Other cast members include Lane Shefter Bishop, Kate Bond, Aylya Marzolf, Geri-Nikole Love, Jake B. Miller, Sarah J. Cornelius, and many more.

Is Desperate Widows Based on a True Story?

No, ‘Desperate Widows’ is not based on a true story. But it highlights the underworld of black market crime that is still operational in various parts of the world. The movie is both directed and written by Lane Shefter Bishop. It is about a recently widowed woman who picks up the pieces of her shattered personal life and takes up residence in a commune-for-Moms. But the establishment is actually a sham shielding a human trafficking ring run by the corrupt owner of the commune.

Crime and injustice have always been a prevalent theme in Lifetime movies. The characters play out in a way that stays true to the human psyche, but the stories are often centered around unfortunate experiences that strike the protagonist. ‘Desperate Widows’ dives deep into the unfair ordeals faced by women. A similar theme occurs in the movie ‘Taken’ starring Liam Neeson as a man whose daughter is abducted during her trip to Europe. She then becomes the victim of a dangerous sex trafficking gang that is about to sell her off.

Another example is Will Wallace’s ‘Trafficked,’ which follows three young women who become entangled in international sex trade. They then land in a brothel in Texas, where they try to escape from. Lifetime has since a long time aimed at relaying content suitable for the female demographic. Although some of its movies are not based on true stories, the network tries to uplift and motivate women through its content.