FX’s ‘Devs’ is a science-based thriller that is created, written and directed by the director of ‘Ex Machina,’ Alex Garland. The talented artist has lived up to his reputation so far with the first three episodes of ‘Devs’ which turn out to be extremely engaging. So far, the protagonist, Lily’s quest of uncovering the truth behind her boyfriend’s death has been largely lowkey. While she manages to score a major victory in the third episode, viewers are yet to witness a full-blown David vs. Goliath eruption.

The fourth episode of ‘Devs’ begins with images of Lyndon’s, Natalie’s, Stewart’s and Forest’s faces, illuminated by a single color- red/blue/green (see featured image for reference). The carcass of an otherworldly creature is depicted on the floor for a couple of seconds. 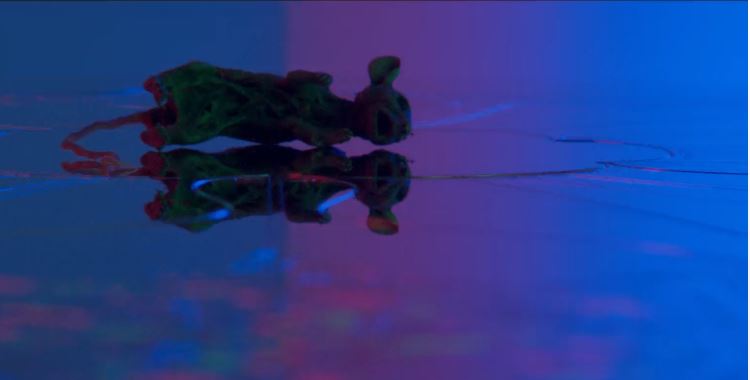 The Devs lab faces a minor tremor since it lies on a tectonic fault line. Forest sees hazy images of a person (presumably Lily) crawling on the Devs screen. Katie sees him doing so and advises him to not attempt to see the future (the Devs machine can project the future!). She reminds him that it is one of the rules at Devs. Their conversation reveals that Lily is going to die in 48 hours.

Forest wonders about the possibility of someone who uses the Devs machine to see the future and then tries to change it. Katie tells Forest that the future is fixed, similar to the past and cannot be changed, upholding Forest’s deterministic worldview.

Jamie thinks that Lily should report their discovery of the doctored footage to the authorities. Lily disagrees since she thinks Forest is too powerful. Lily goes home and disallows Jamie from accompanying her, despite his insistence since she does not want him to be in danger.

Kenton waits outside Lily’s house. When Lily returns, he tells her that she has to visit a therapist after her psychotic breakdown at work (in the previous episode, where she pretends to be overcome by anxiety). Lily tells the therapist that she has no memory of the episode. After their session, Kenton asks the therapist about their conversation after handing him an envelope, presumably with cash. The therapist thinks that Lily is lying about her schizophrenia and psychosis.

Lyndon has something important to share with Forest and the other Devs workers. He highlights how the Devs machine works on a certain principle known as the De Broglie-Bohm theory and how that has limited his work on gaining clear audio projections from the past. Lyndon tells everyone that he attempted to use the “many-worlds interpretation” which is also deterministic.

Then, he proudly displays the result: a crystal clear recording of Jesus Christ’s voice from 2000 years ago! While everyone is fascinated, Forest tells Lyndon that it is a waste of time and dangerous. He tells him that it is not really Jesus Christ’s voice but an interpretation of it. The machine would yield a slightly different result each time. To everyone’s surprise, Forest fires Lyndon for undermining his authority and breaking a basic rule (of ditching the De Broglie-Bohm theory).

Kenton is driving Lily back and tells her that he knows everything about her psychosis and suicidal nature. Lily notices that he is not driving in the direction of her home and asks him to stop. When Kenton does not halt the car, she interferes with his driving which causes the car to crash. Both Kenton and Lily manage to survive and the latter manages to run away.

Katie confronts Forest about firing Lyndon. Forest tells Katie that Lyndon’s code yields varied projections of reality: like the Pope converting to Islam in an alternate universe. When Katie says that it works, Forest shouts that it does not. Katie tells him that she tried to apply Lyndon’s many-worlds interpretation to light waves. Then, she shows Forest clear projections of his daughter blowing bubbles. Forest cries.

Lily rushes to Jamie’s house and calls 911, telling the operator that she has information regarding Sergei’s murder. The police arrive at Jamie’s house and arrest Lily for “reckless endangerment in the first degree while taking control of a vehicle.” The therapist is present and recognizes Lily as a patient. The police officer announces turning Lily over to an involuntary psychiatric hold.

When Jamie tries to leave his house behind the police, Kenton pushes him back inside. He attacks him and presumably kills him…

The fourth episode of ‘Devs’ throws a lot of technical jargon at the viewers. Not much explanation is provided to actual scientific theories, but their significance to the plot is depicted aptly.

To begin with, the De Broglie-Bohm Theory is the guiding theorem that the Devs machine originally functions on. It is an interpretation of quantum mechanics. Basically, this theory implies that the velocity of particles depends on an overall guiding principle of the entire system (do keep in mind that I am no expert in quantum mechanics but have attempted to provide an explanation that could be the easiest to digest for a layman, strictly in relation to the miniseries). This entire system may be considered to be the whole universe.

The series uses the De Broglie-Bohm Theory to lend a scientific backing to Forest’s deterministic worldview. He believes that there is no free will and the paths/fate of every living and non-living entity in the world is predecided since everything exists in a physical system, i.e. the universe. Hence, if the guiding principle or mathematical equation which the universe functions on can be calculated, the fate of every individual entity can be calculated.

This is where the series heads into the science-fiction territory. It presupposes that Forest has managed to calculate this guiding principle/equation based on which the physical system of the universe functions. Obviously, this is far from reality and the show takes creative liberty but that is precisely how science-fiction works. Hence, using very complex mathematical equations, the Devs machine can calculate where a particle/entity was at a particular point in the past, and similarly, at a point in the future. This is how the Devs machine can project images from the past/future: by calculating the trajectory of millions of particles.

However, Forest correctly criticizes Lyndon (although his reaction to fire him might have been too harsh). Lyndon’s method yields projections from any probable reality according to the many-worlds interpretation. This means that his projections could be from any one of the infinite number of alternate universes that presumably exist according to the many-worlds interpretation.

That is not particularly useful for the Devs machine since it would lose its accuracy in projecting events from this/our current universe. The projections could be from ANY world in the “multi-verse.” Essentially, the Devs machine cannot reliably provide projections of the world we live in, rendering it practically useless.

What is that creature at the beginning of the episode?

Read More: Movies That Will Make You Question Reality