‘Devs’ is a murder-mystery thriller by Hulu that is based on science and technology. The dominance of the science-fiction theme is visible in the first two episodes of the series. However, the show shies away from being a sci-fi television series since it focuses on the protagonist, Lily investigating the death of her boyfriend.

In the previous episodes, the tech firm, Amaya is depicted to be conducting cutting-edge research that can form hazy images from the past. While the true potential of this technology has not been highlighted, the fact that it is shrouded in secrecy and is revolutionary has been established. The secrecy is the reason that Lily’s boyfriend, Sergei is shown to be killed on the orders of Amaya’s CEO, Forest. In fact, it is revealed in the second episode that Sergei was a Russian spy, indicating just how game-changing the new technology can be.

The third episode of ‘Devs’ begins with hazy images of a hand touching the Devs screen followed by Jesus Christ speaking in a distorted voice and other abstract visuals. Katie catches Stewart and another Devs coworker watch Marilyn Monroe having sex using the Devs machine. She asks them to follow the rule of respecting personal privacy and stop watching.

A Senator visits Amaya. She tells Forest that he has to come for a Senate sub-committee meeting. When she asks about Devs, Forest tells her that the unit is testing the potential of quantum computing in predictive analytics. The Senator says that there needs to be some governmental oversight.

Anya takes Jen on the side and asks her why she played along with Lily’s paranoia. Jen tells Anya that Lily has had episodes of schizophrenia in the past. Jen says that they should help Lily get inside the system and make it look like they are doing what she (Lily) wants them to do.

Lily and Jen go to Kenton’s office. Lily tells Kenton that Sergei worked for the Russians and that Anton contacted her. She tells him that she thinks that the Russians killed Sergei. Furthermore, Lily adds that she has been through something similar in Brooklyn where she started to see patterns in numbers around her. When Jen and Kenton do not seem to follow, Lily starts to get worked up and asks Jen if she thinks she is crazy. She walks out of the office.

Outside the office, Lily crawls on the ledge outside Kenton’s office for some fresh air as she is feeling anxious. Forest sees Lily on the ledge from the ground when he is walking the Senator back to her helicopter. He calls Kenton. Kenton crawls on to the ledge and calms Lily down. He tells her that he believes her and convinces her to walk back to the building. Meanwhile, Jen transfers something from Kenton’s computer onto a pen drive. 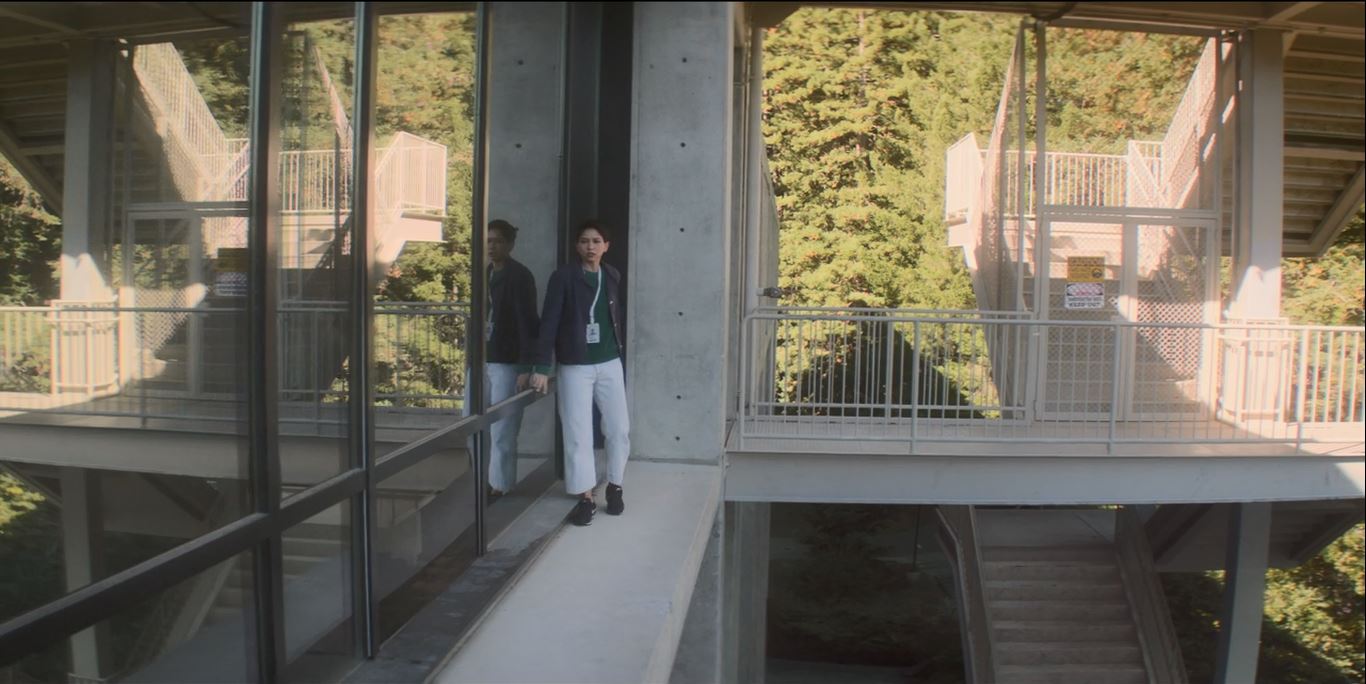 Kenton tells Forest about Lily’s schizophrenia and how they can use that against her in the future. It is revealed that Lily had been acting like she had a fit/panic attack so that Jen could transfer CCTV footage from Kenton’s computer. Lily goes to Jamie’s house to watch the video of Sergei burning since she does not want to see it alone. Jamie figures out that the flames in the video look the same, concluding that the footage of Sergei burning was doctored using VFX.

The third episode definitely pales in comparison to the first two episodes of the series. However, it is just a result of the story digging its claws into the middle portion of the narrative, which generally tends to be less intense than the beginning or the end. Yet, the third episode is not bad in any way.

One of the things that ‘Devs’ has excelled at is making seemingly complex events look simple. This is both a testament to the smartness of the series’ writers and the protagonist, Lily. For instance, getting footage from Kenton’s computer or any kind of information from anybody at Amaya certainly felt like a Herculean task before. Viewers might have also anticipated some sort of elaborate plan/complex heist. However, Lily’s simple yet effective plan does the job breezily.