Do Kyle and Nellie End Up Together in Sweet Magnolias Season 2?

‘Sweet Magnolias‘ is a heartwarming romantic drama TV series on Netflix. It is based on the eponymous books by Sherryl Woods and developed for the screen by Sheryl J. Anderson. The story revolves around Maddie, Dana Sue, and Helen, three childhood friends who reside in the charming town of Serenity. Popularly known as the “sweet magnolias,” the trio guides each other through the bittersweet journey of life and becomes a force to reckon with for their loved ones. Besides their love lives and work troubles, the show also focuses on the interconnected lives of their adolescent children.

Maddie’s son Kyle has difficulties coping with Annie rejecting his affections but as season 1 ends, he finds an unlikely companion in Jackson’s younger sister Nellie. However, both of their lives hang by a thread after they get into a massive car accident. Viewers are left wondering whether they both make it out safely and decide to give their relationship a shot. Here is the answer to everyone’s doubts. SPOILERS AHEAD.

Do Kyle and Nellie End Up Together?

No, unfortunately, Kyle and Nellie do not end up together. After they survive the deadly car crash, Kyle sustains severe injuries while she is less critical. Despite her parents blaming Kyle for the mishap, Nellie sneaks into his hospital room to check upon him. She gifts him a book and tells him that she doesn’t hold him responsible for the accident and forgives him for his impulsiveness. Even after her reassurance, he begins drowning in his guilt and withdraws from everyone. 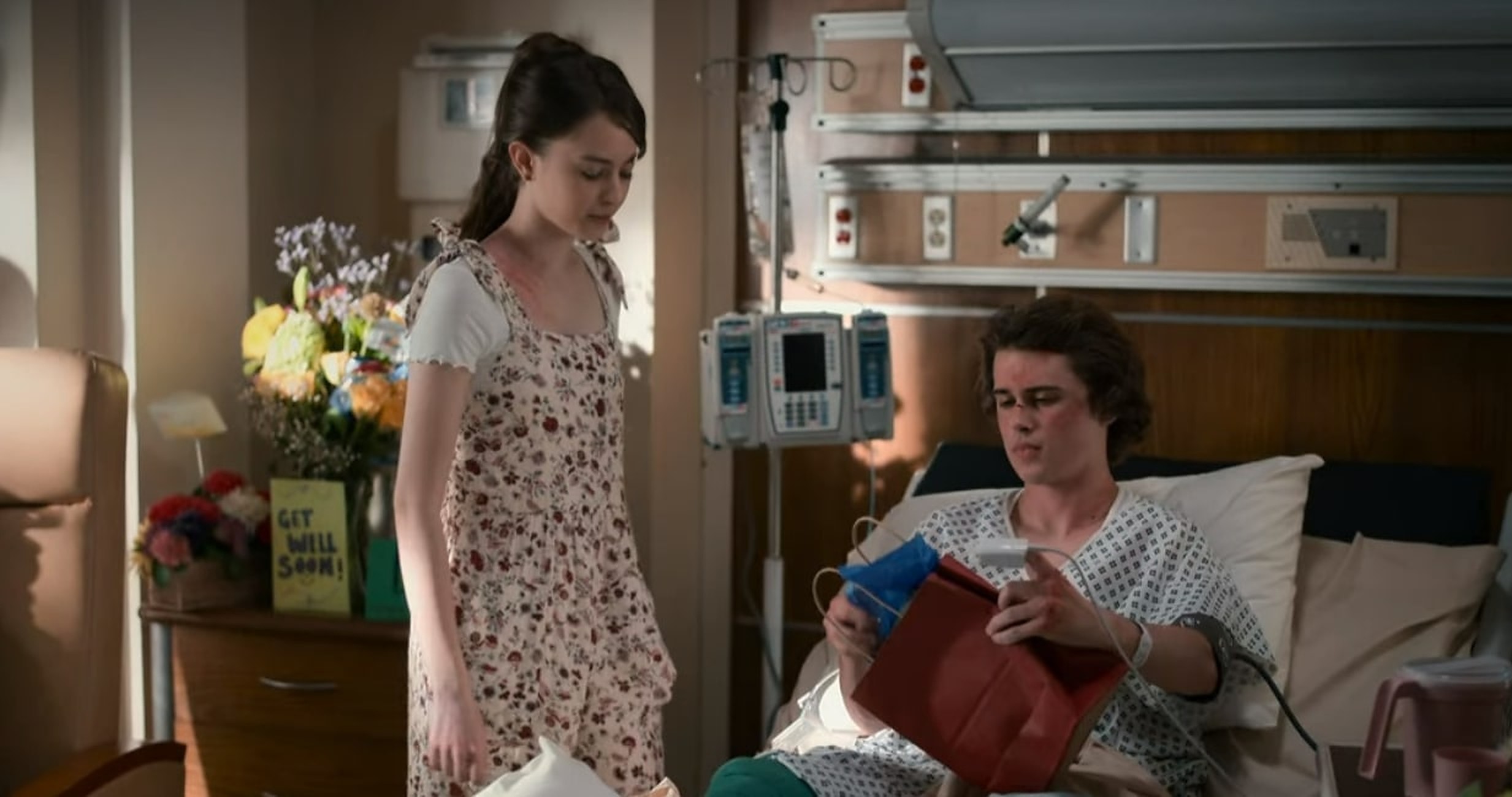 Kyle grapples with his feelings of anger towards Tyler and the situation, as well as his remorse at what happened. Being bedridden and socially cut off further takes a toll on his mental health and he starts to behave aggressively with people, especially Annie. Maddie gets increasingly worried about her son’s behavior and when he doesn’t open up to her despite several attempts, she makes him attend counseling with Ashley. That does not benefit Kyle much as he refuses to speak about his feelings. To everyone’s surprise, he seeks solace in Noreen, who comes back to town just to comfort him.

Gradually, Kyle starts healing both physically and emotionally and starts volunteering at the Vacation Bible School as ordered by the court. He is extremely reluctant to do so, but eventually, it helps him divert his mind. Alongside, he also commences physiotherapy for his injuries and struggles to cope with the immense physical pain. With Cal’s guidance and motivation, Kyle is able to work on his recovery better and starts getting back to his usual self. While volunteering, he meets a schoolmate named Sophie who shares a common love for video gaming with him. She recruits him to help her develop a new game she is working on and he happily agrees.

During one of Kyle and Sophie’s brainstorming sessions, Nellie stops by his house to ask about his recovery. He is glad to see her after so long and invites her to join their meetings for the game development. She readily obliges and sees it as a chance to spend time with Kyle, who moreover takes her side in front of his teammates during discussions. Sophie observes their chemistry and nudges him to tell her that he likes her. A nervous Kyle realizes his feelings for Nellie and asks her for a date, to which she joyfully agrees.

However, Mary Vaughn and Maddie’s ongoing conflict due to the petition against Trent causes a big hurdle for their children’s blossoming love. After Maddie refuses to withdraw the petition, Mary Vaughn decides to seek revenge and forbids her daughter from keeping any contact with Kyle. A dutiful Nellie hesitantly agrees to follow her mother’s command out of fear. She avoids him at the memorial party for Ms. Frances, much to his surprise. Later, she asks him to meet in secret, where she confesses that it would be the last time she sees him as her mother is against it. She feels that it would be unfair to leave him without telling and states that she has come to say goodbye.

Thus, Kyle and Nellie share a sweet kiss and bid each other a heartbreaking farewell. Their romance gets paused even before taking off, but it is possible that they may reconsider their decision in the future and muster the courage to take a stand for their love in front of their parents.

Read More: Do Helen and Erik End Up Together in Sweet Magnolias Season 2?