Netflix’s ‘Fistful of Vengeance’ begins as a blistering tale of revenge, but the stakes keep getting higher. What starts as the hunt for a killer soon turns into a mission to save the world from a mythical being. Accompanied by his faithful friends, the last Wu Assassin, Kai, takes on wave upon wave of ominous forces. The fights are swift, frequent, and almost always at close quarters. In fact, the film draws most of its thrills from extended fight sequences set amidst a remarkable variety of backdrops.

There are a fair few special effects, but some of the fights have a definite visceral feel to them. If you’ve been wondering whether some of the cast members actually know martial arts, then you’re not alone. We decided to take a look at just how many actors in ‘Fistful of Vengeance’ are actually trained in the ways of fighting.

Do the Actors in Fistful of Vengeance Know Martial Arts?

It probably comes as no surprise that not one but multiple central and supporting cast members in ‘Fistful of Vengeance’ are experienced in the martial arts. We’ll get to Iko Uwais, who essays the central Kai Jin, in a moment. Let’s take a look at some of the other cast members first.

Lewis Tan’s character Lu Xin Lee is a close second to Uwais’ Kai when it comes to being in the heart of the action. A loyal friend of the Wu Assassin, Lu spends much of the movie taking down hordes of bad guys before briefly being brainwashed into one himself. In fact, Lu actually helps Kai in the climax to subdue the film’s antagonist.

Lewis Tan’s blistering fight scenes looking so realistic likely has something to do with him reportedly growing up in a family of stunt coordinators and martial artists. In an interview, he revealed that his father was a national champion martial artist who practiced multiple styles. From a young age, Lewis was seemingly taught how to fight by his martial artist father. The actor also plays the role of the deadly fighter Gaius Chau in the apocalyptic martial arts series ‘Into the Badlands.’

Apart from Tan, another cast member who has some serious martial arts skills in real life is JuJu Chan Szeto, who essays the assassin, Zan Hui. According to her profile, Juju is proficient in multiple martial arts styles. She was also part of the Hong Kong National Team for Taekwon-Do and was part of numerous international competitions. Juju has also seemingly trained under a Hong Kong champion Thai boxer and was even referred to as the ” Female Bruce Lee” by the Hong Kong Media.

And finally, we come to Iko Uwa, who essays the central character of Kai Jin, the last Wu Assassin. Uwais has become a bit of a legend in the martial arts and fighting films genre for his appearances in films like ‘The Raid,’ ‘The Raid 2, ‘Mile 22,’ and many others. He, of course, also leads the cast of the Netflix martial arts series ‘Wu Assassins.’ 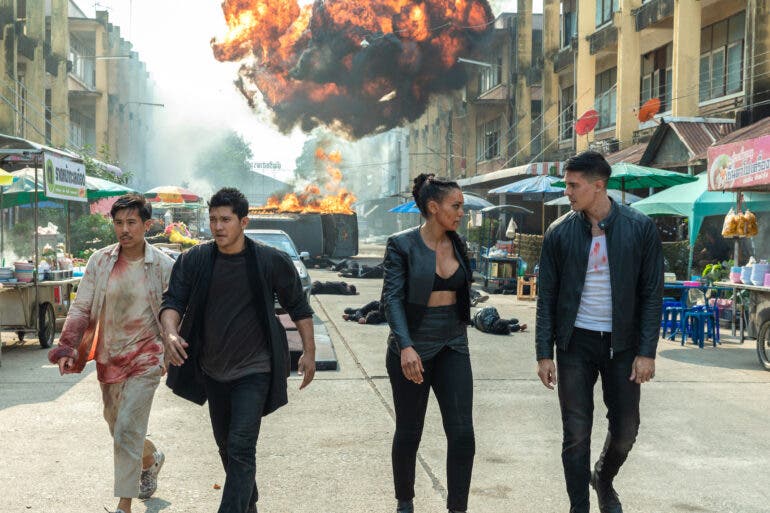 Apart from being an actor, Uwais is reportedly a stuntman, fight choreographer, and accomplished martial artist. According to some reports, he is also proficient in the local Indonesian martial art called Silat. Apparently, his grandfather was a well-respected Silat master who founded the Tiga Berantai school in Jakarta. And so, with the central character coming from a legacy of martial arts, paired with other members of the cast who are also proficient martial artists, and some SFX magic, ‘Fistful of Vengeance’ serves up some pretty visceral action.