Is Doc Rivers Married? Does He Have Children?

The American basketball coach and former player, Doc Rivers, is renowned for his defense capabilities. For the past two decades, the supremely talented sportsperson has exercised his strong trait to mentor The Clippers, an American professional basketball team based in Los Angeles. Despite the varied highs and lows, he has always shown resilience and the utmost courage in accepting his mistakes. He publicly admitted his fault when his team got eliminated from the playoffs and came crashing down.

The legendary coach has also been a television analyst for a short duration of one year. In 2020, Rivers and other famous coaches bagged the opportunity to star in a sports documentary on Netflix called ‘The Playbook.’ It entails the rules that they swear by to achieve success in sports and life. Here is everything we know about the former NBA point guard and his personal life!

It won’t be incorrect to say that basketball runs in his blood as most of his family members belong to a similar background of basketball players. The long list includes his uncle, Jim Brewer, a former NBA player, and his cousin, Byron Irvin, a former NBA guard. Another cousin in his extended family, Ken Singleton, was a Major League Baseball player. But factually, Doc Rivers was not raised into one as his father was a veteran of the Chicago police department for 30 years.

The Los Angeles Clippers head coach seemed destined to excel at the sport after coming to light as a star at Proviso East High School in the Chicago suburb of Maywood, Illinois. Before retiring as a player in 1996, Rivers had made a remarkable record of playing 864 regular-season games in the NBA. During the 1999-2000 season, he became the NBA Coach of the Year, after being its head coach for the first time.

He had always been an admirer of the NBA star Julius Erving and often sported shirts that read “Dr. J.” Owing to this, Rick Majerus, his assistant coach at the summer basketball camp in Marquette University, nicknamed him “Doc.” In addition to gaining the sobriquet that has stayed with him since then, the champion also met the mother of his future children at Marquette University. Let’s know more about their journey together!

Glenn Anton “Doc” Rivers met Kristen Campion in 1979 when he was a freshman at the university. The two started on an unconventional note when Doc went up to her with a suggestion that she should wash her hair once in a while. While this doesn’t sound like a pick-up line that would impress a girl, Kristen saw the intention behind his cheeky comment and let it go. The two developed a close friendship and started dating soon after. But this was during the time interracial relationships were unheard of, so their union was vehemently challenged. Their families were treated with sickening levels of harassment and racial abuse. 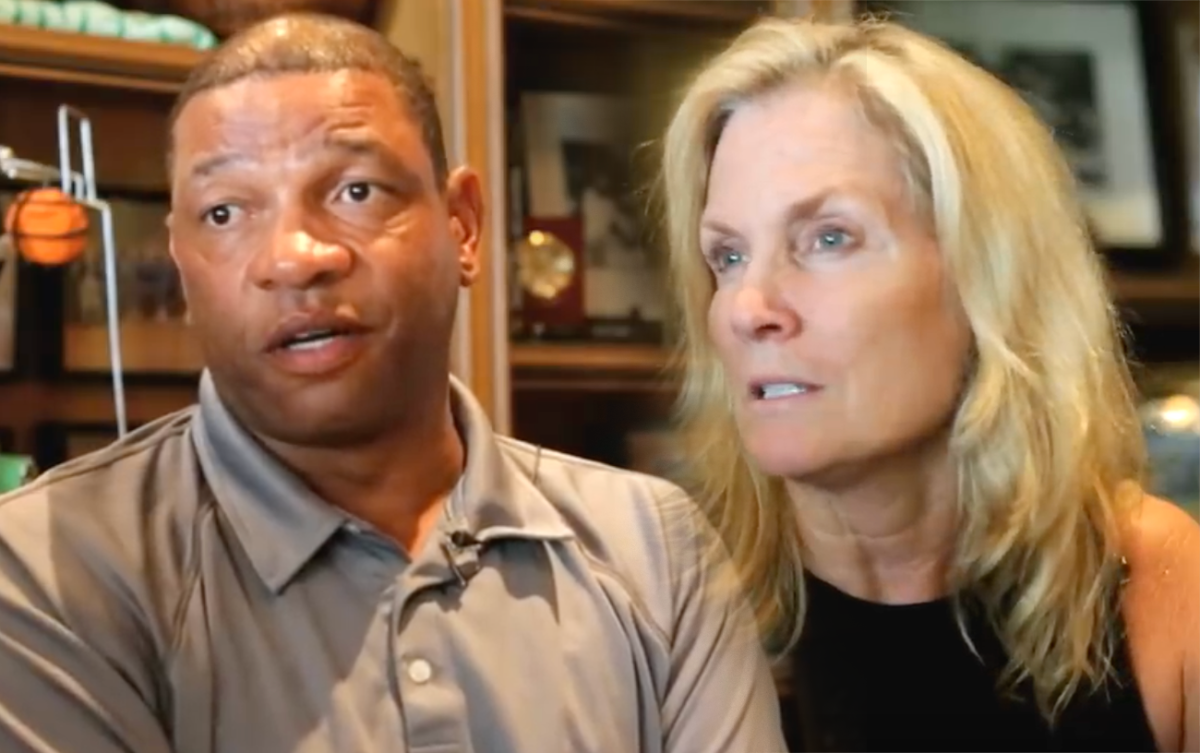 The couple bravely faced the opposition and responded to it by sealing their love with a legal marriage. According to reports, the college sweethearts tied the knot in 1986 and had four children, Jeremiah, Callie, Austin, and Spencer Rivers, the following years. Their oldest son, Jeremiah, played basketball at Georgetown and graduated from Indiana University in 2011. Callie, the pair’s only daughter, exhibited her father’s athletic traits by playing volleyball at the University of Florida and even went overseas to ace it professionally.

Their middle son, Austin, is a nationally recognized basketball player and a father to Kayden, his son born out of wedlock with his ex-fiancee, Brittany Hotard. Interestingly, Austin’s former Duke teammate, Seth Curry, married his sister, Callie, on September 14, 2019, a year after they welcomed their daughter, Carter Lynn. Doc and Kristen’s fourth child, Spencer, has also played professional basketball at UC Irvine.

The LA Clippers coach’s 34-years-long marriage has allegedly hit the rocks, but the reasons leading to their separation are not for public knowledge. It is claimed that they have been living apart for the past five years now. These rumors seemed to concretize after Doc was reportedly spotted with his mystery girlfriend, a younger brunette woman, outside San Vicente Bungalows in LA. He had his arm wrapped tightly around her waist, dismissing any speculation of this being a casual dinner with a friend. The hypothetical theory to keeping his long-term relationship away from the media’s prying eyes is that Doc’s divorce from Kristen is still in the process of being finalized.