Does Iris Die in The Flash Season 7?

Iris West-Allen (Candice Patton) has been an integral part of ‘The Flash’ and Barry’s life in general ever since fans first met her in the first season. Her determination, courage, and undeterred optimism have ushered Team Flash forward in the darkest of times. Barry even considers Iris his lightning rod, and she acts as the voice of reason within Team Flash. Therefore it turned out to be quite the challenge for the scarlet speedster and his team to navigate the evil machinations of Eva McCulloch without Iris at the back end of season 6.

While Eva trapped her in a different dimension, fans still knew Iris was alive. All that changed in the final moments of season 6, which leaves Iris with an uncertain fate. Season 7 promises to address the question mark over Iris’ future only to complicate the matter further. If you are one of the concerned fans looking for an explanation, we’ve got you covered. Here’s everything we know about what happened to Iris.

Does Iris Die in The Flash Season 7?

In the closing moments of the season 6 finale, after locating Singh in the Mirrorverse, Iris’ body begins to glow, and she mysteriously starts to wither away, leaving her fate up in the air. The seventh season premiere, ‘All’s Wells That Ends Wells’ resolves this cliff-hanger and reveals that Iris is very much alive and sent away to another part of the Mirrorverse by Eva. There Iris is being tortured by the projections of her own memories. After the artificial speed force restores his speed powers, Barry manages to open a portal that will allow him to rescue Iris from the reflective dimension. However, due to the time she spent in the mirror dimension, Iris collapses as soon as she comes out of the Mirrorverse. This moment certainly had audiences sweating over the fate of the fan-favorite character. 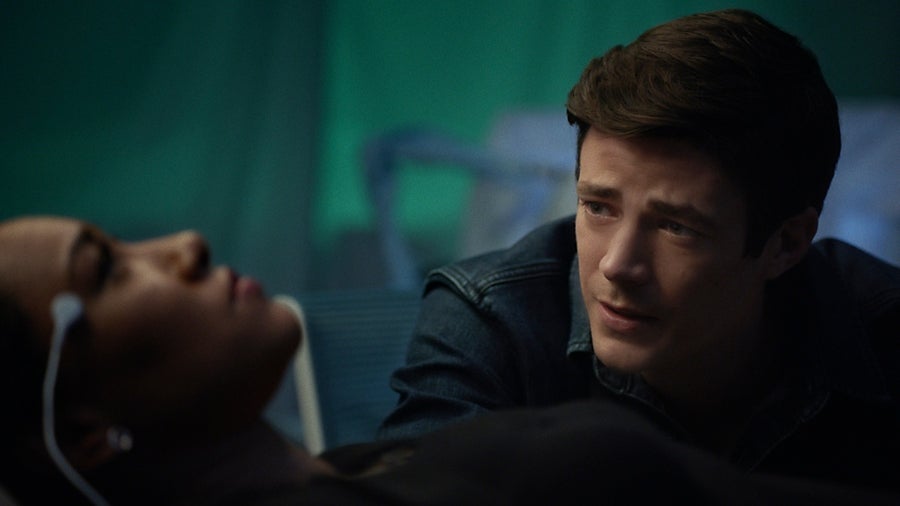 It is revealed that Iris is in a catatonic state as her body did not react well to being forced out of the Mirrorverse. The situation is dire as she continues to experience seizures and could succumb to the pain, resulting in her death. The Earth-1 Harrison Wells reminds Barry that he is the “Paragon of Love” for a reason. Barry has a heart-to-heart with the comatose Iris. Their hands touch, and a spark emerges just like it did when Iris found out Barry is The Flash all the way back in season 1. The power of Barry’s love is enough to pull Iris out of the catatonic state. Fans can take a breath of relief as Iris is alive and well.

After two back-to-back scares, the decision not to kill off Iris is a welcome one. Iris not only acts as the emotional support system for Barry but is integral in the overall characterization of Barry as a hopeful superhero in contrast to his dear friend and mentor, Oliver Queen/ Green Arrow. Iris’ death would have certainly been a grim moment for Barry and would’ve risked breaking the character forcing him to take a dark turn. After all, fans already got a peek at a darker version of Barry in season 3 as he turned into the villainous Savitar, without his friends and Iris’ love in an alternate timeline.

Eagle-eyed fans would have also noted that the spark of lightning is the last remaining part of the speed force which grants Barry his power. Therefore, Iris is instrumental in helping Barry regain his speed. The overall ordeal of Iris in the Mirrorverse arc is a reflection of Barry’s relationship with Iris. It emphasizes why Barry considers Iris his lightning rod, and the crucial role she plays in restoring Barry’s powers serves as a powerful visual representation of that idea. The Flash might get his powers from the speed force, but Iris is his real strength.

Barry has lost his powers on the show every now and then, but he’s never lost his strength, Iris, and we can only hope he never does. The show’s writers have already teased major developments for Iris and Barry in season 7. But actress Candice Patton, who plays the part of Iris, has not expressed a desire to leave the show anytime soon. Therefore, it is unlikely that the character would be killed off in season 7.