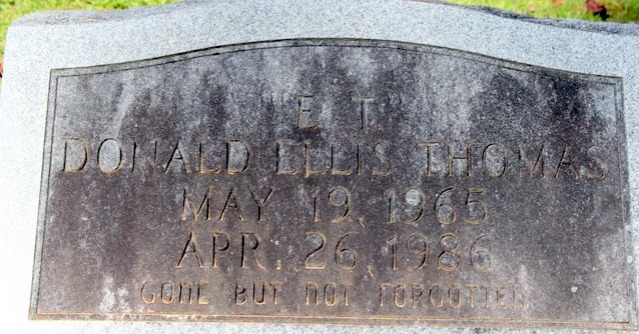 Investigation Discovery’s ‘Shattered: The Bodies Out Back’ chronicles the murder of Donald Thomas and his cousin Lamar Lafferty in Shubuta, Mississippi, in April 1986. Based on the description of the survivors, investigators were able to immediately identify the two killers as fugitives responsible for a jailbreak a day prior to the murder. The episode follows how the investigators were able to nab both of them and brought them to justice. If you’re intrigued and want to know the identity as well as the current whereabouts of the perpetrators, here’s what we know.

How Did Donald Thomas and Lamar Lafferty Die?

Donald Ellis “E.T.” Thomas was born on May 19, 1965, while his cousin, James Lamar Lafferty, was born on September 14, 1963. Donald worked at an oil field and he left for work approximately at 7:00 am on April 26, 1986, as usual. Little did he know it was going to be the last day of his life. He was last seen alive by Lamar’s father when he went to pick up Lamar and his infant son, Brandon Lafferty, in his truck at around 1:00 pm.

The trio headed for the mobile home owned by Donald on Shubuta Vossburg Road, approximately 11 miles west of Shubuta, Mississippi. They were discovered dead hours later when police arrived at the scene, responding to a home invasion call. Officers noticed blood on the grass and found drag marks that lead them some distance behind the mobile home. They discovered the dead bodies of Donald, 20, and Lamar, 23, tossed into a 35 feet deep gully approximately 150 yards behind Donald’s trailer at around 3:35 pm.

Donald’s autopsy report stated that he had died from gunshot wounds on the middle of his forehead and lower back with both the bullets being shot from close quarters of approximately 15 feet. Lamar had 2 close-contact wounds on his head, both shot from a small-caliber gun. The reports further stated that both men were alive during the infliction of their wounds and expired within a few minutes.

On April 26, 1986, Donald’s younger sister, Marty Thomas, and her elder sister, B.B. Beach, drove over to the trailer to play in the gully sometime between 2:00 and 2:30 pm. When they reached the trailer, they were ambushed by a white, bald man who had a gun in his hand. He took them inside the trailer, tied their hands and feet, and threatened to come back and rape and kill them. While being hostage, the girls also saw another black man with a gun roaming inside the trailer.

When both the intruders had driven away from the scene in Donald’s silver Ford pickup truck, the girls somehow managed to free themselves from their bindings and escaped to a friend’s house, where Marty called the police. Initially, they were scared of the assailants and lied to the police regarding how they looked. But when Marty realized that Donald and Lamar were shot dead, she gave the investigators the truthful description of their assailants.

Upon hearing the description of the intruders from both the young girls, the Shubuta police realized that it fitted the description of two fugitives who had managed to escape from Clarke County Jail the evening before. The names of the fugitives were Robert S. Minnick and James “Monkey” Dyess. The investigators also discovered that the killers had stolen 3 shotguns, 3 rifles, a pistol, and ammunition along with Donald’s pickup truck.

The police started looking for the fugitives and canvassed the neighboring areas only to stumble upon Lamar’s wallet and Donald’s checkbook several miles away from the crime scene. They decided to pursue the stolen vehicle by entering the details of the truck on the NCIC network which led to the recovery of the vehicle in Florida on May 6, 1986. An individual named Paul Stanley Ward was found driving the missing vehicle and he claimed that he had found it in New Orleans. Several New Orleans parking tickets found under the seats confirmed his story.

On August 22, 1986, the Shubuta police were notified that one of the killers, Robert, had been arrested by the San Diego Police. Upon being interrogated, he confessed to fleeing the prison along with James as well as the invasion and murders on the following day. He claimed that he and James had gone inside the trailer to steal weapons when two men and a child drove up in a car. As per Robert, James went on to shoot one of them and forced him to kill the other by holding him at gunpoint. He further claimed that it was he who convinced Dyess to leave the baby alive as well as the other two girls.

Where Are Robert Minnick and James ″Monkey″ Dyess Today?

Robert was extradited to Mississippi and was initially sentenced to death in September 1986 after being convicted of two counts of capital murder while engaged in robbery. However, the sentence was commuted to life imprisonment in May 1992. As per official court records, he is in his late 50s and currently serving his sentence at the South Mississippi Correctional Institution.

On March 16, 1988, an officer of the LAPD noticed James and stopped his vehicle for a routine traffic stop in Los Angeles, California. He was immediately arrested and extradited to Mississippi where he was also convicted of two counts of capital murder while engaged in robbery. He was also sentenced to life in prison and was incarcerated at the South Mississippi Correctional Institution. He died at the age of 62 in July 2018 at Promise Hospital in Vicksburg.