Netflix’s Dragon Age Absolution Ending, Explained: Who is the Traitor? 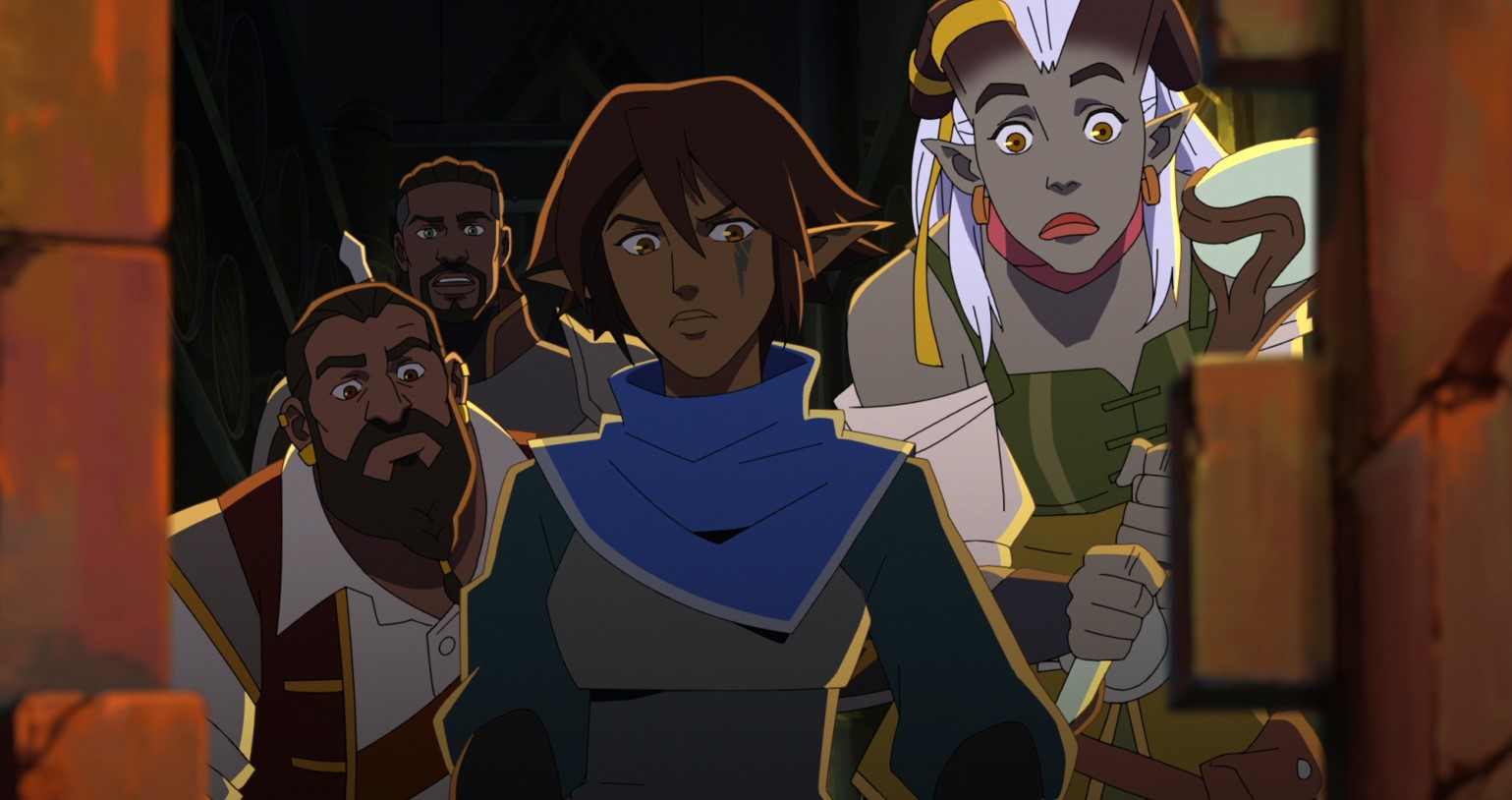 Created by Mairghread Scott, ‘Dragon Age: Absolution’ is a Netflix adult-animated series and a part of the sprawling multi-media ‘Dragon Age’ franchise, which originated from the BioWare games of the same name. The plot revolves around Miriam (Kimberly Brooks), an elven mercenary, who reunites with her former lover Hira (Sumalee Montano), a human mage, to lead a band of other mercenaries on a heist to retrieve a powerful artifact known as the Circulum Infinitus. However, this means that Miriam has to confront the horrors of her past and then figure out who is the traitor in her crew. Here is everything you need to know about the ending of ‘Dragon Age: Absolution’ season 1. SPOILERS AHEAD.

Like almost everything else in this franchise, ‘Dragon Age: Absolution’ takes place in the fictional world of Tedas. Most of the narrative is set in the Tevinter Imperium, the oldest human nation in Tedas, governed by a class of mages known as the magisters.

Within the ‘Dragon Age’ universe, ‘Absolution’ is reportedly set after the events of ‘Dragon Age: Inquisition,’ The Netflix series contains multiple references to what happened in that game. The series is set before the yet-to-be-released game ‘Dragon Age: Dreadwolf.

The story begins with Miriam stealing a valuable but dangerous material known as lyrium along with her friend Roland and the crew they are currently part of. It is revealed that they were hired by Fairbanks, the freedom fighter who appears in ‘Dragon Age: Inquisition,’ on Hira’s suggestion. Hira or Sapphira and Miriam have a long history together, but the latter feels betrayed because Hira left her to join the Inquisition. 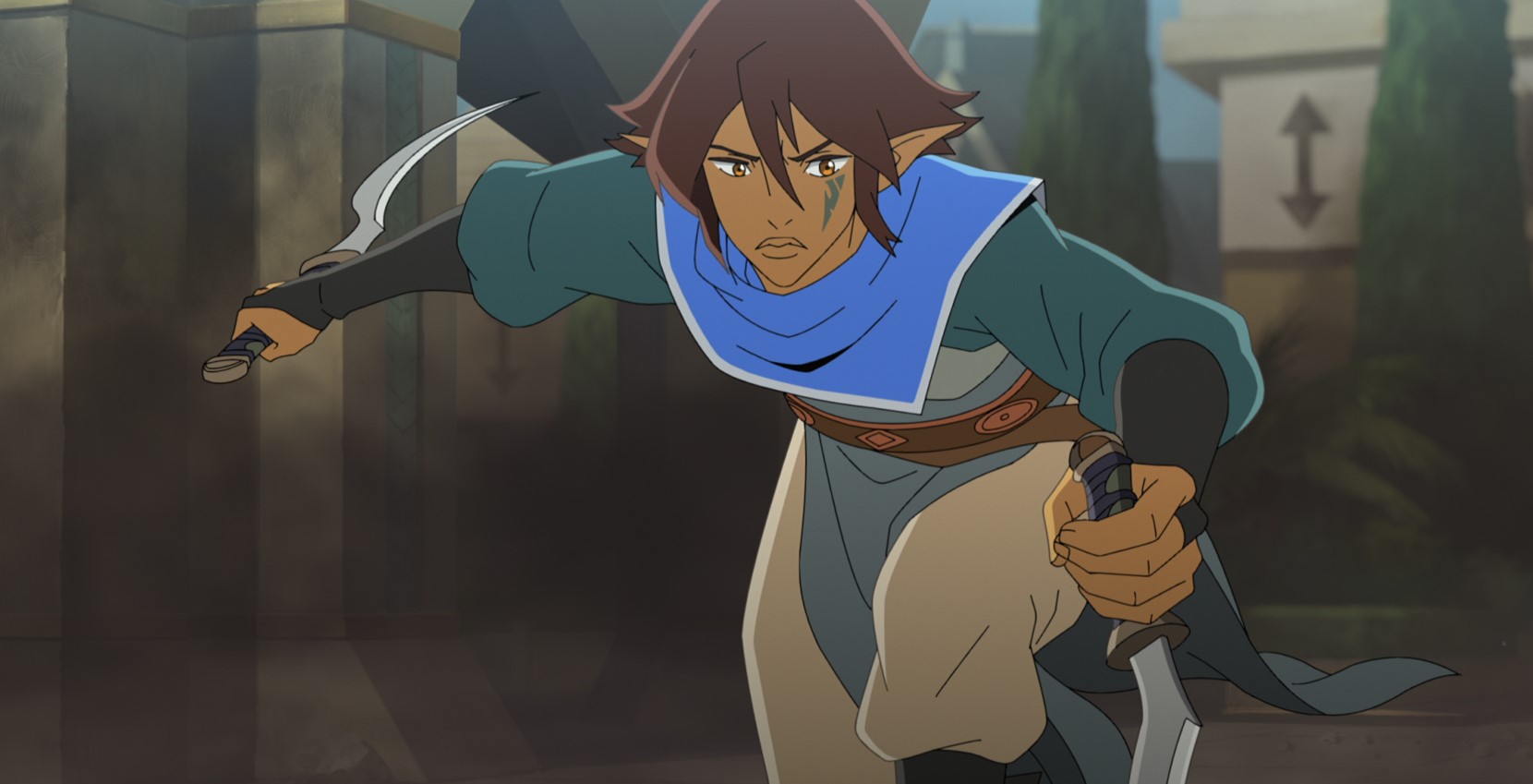 After Miriam and Roland are introduced to two other members of the party — Lacklon, a Dwarven fighter and self-proclaimed Lord of Fortune, and Qwydion, a freedom fighter and mage — they learn precisely why they have recruited. Before the end of the Inquisition, Cassandra Pentaghast, the erstwhile companion of The Inquisitor, told Miriam and Roland to retrieve the Circulum Infinitus from the city of Nessum, where the artifact is currently studied by Magister Rezaren Ammosine.

Miriam and Rezaren also have a long history. The Tevinter Imperium has a severe caste system, with elven slaves at the bottom tier of the social hierarchy. Miriam and her brother Neb were two such slaves. They grew up alongside Rezaren, who considered them siblings but still beneath him. Rezaren’s mother, a vicious woman who is the source of almost all the horrors Miriam associates with her past, transformed Neb into a monster to save Rezaren. Miriam killed the woman and was forced to kill her brother before running away.

For Miriam, returning to Nessum means that she has to confront Rezaren. She overcomes her initial reluctance to accompany the others on the mission. Meanwhile, in Nessum, Rezaran plans to use the Circulum to revive and asks his lover, Tassia, the Knight-Commander of the Templar Order, to trust him. The Circulum requires blood magic to function, but instead of using scores of humans, Rezaran uses the blood of the dragon chained below the palace.

The heist doesn’t go as planned. Fairbanks is killed, Hira is caught, and Miriam is forced to fight the possessed body of her dead brother. In the season finale, Rezaren succeeds in bringing back Neb, but the latter rejects the resurrection and destroys his mortal body and the demon inhabiting it. The real traitor is revealed, and Miriam is forced to come to terms with her past and future.

Dragon Age: Absolution Ending: Who is the Traitor?

Initially, it seems that Fairbanks is the one who betrayed Miriam and the rest of the group, though Qwydion vehemently disputes this. In the season finale, it is revealed Hira is the real traitor. She belonged to an influential family of the Imperium. However, when her family tried to help the people that the others in the Imperium enslaved, the Venatori, a dangerous cult made of Tevinter supremacists, came for the family and burned Hira’s father with dragon fire as a warning. Since then, Hira has sought the destruction of Tevinter in its entirety. 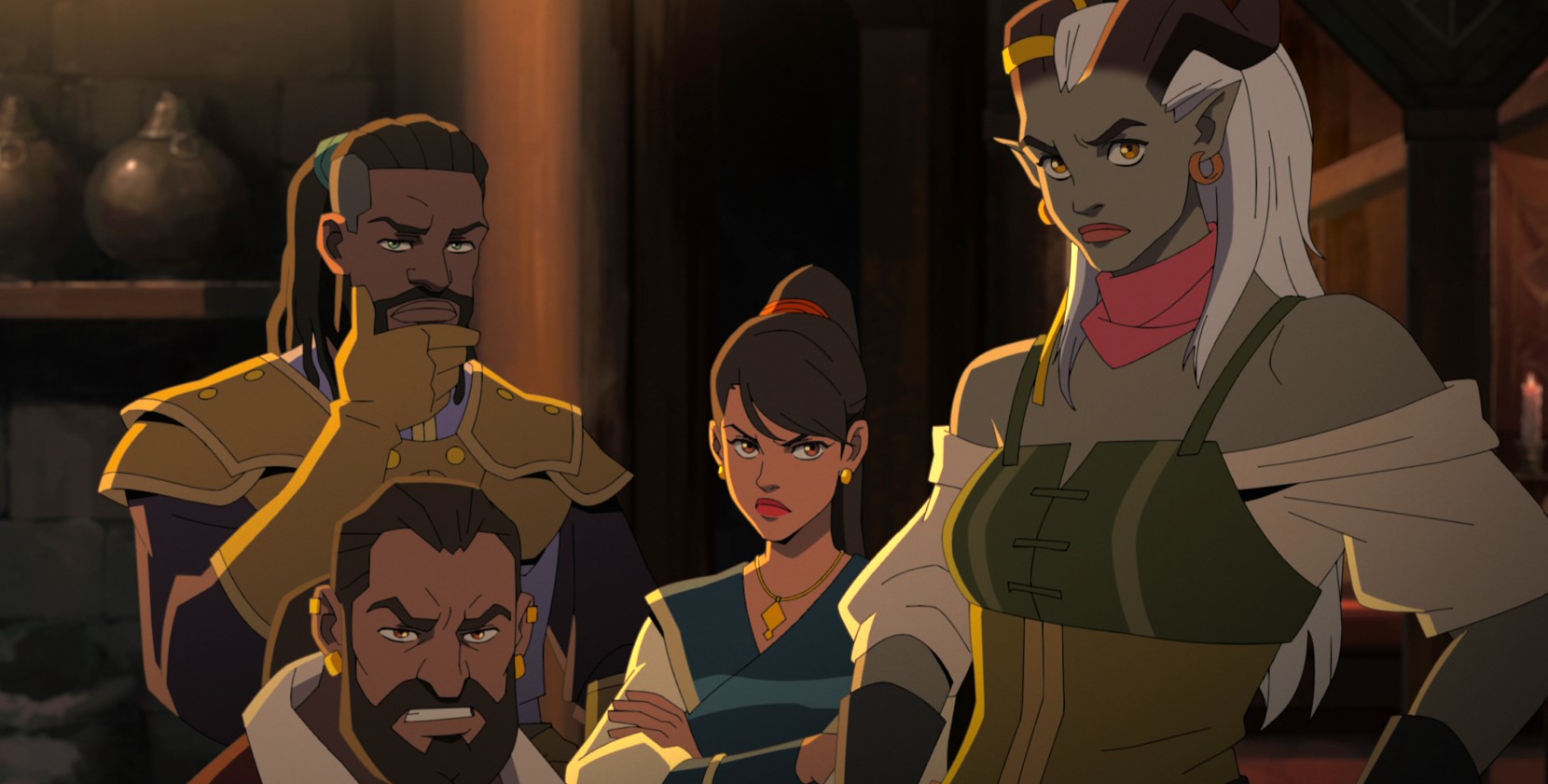 Hira made a secret deal with Rezaren. The plan was that Rezaren would bring the Circulum to Nessum and use it to resurrect Neb before giving it to Hira. In exchange, she would bring him Miriam. Hira’s capture was part of the plan. The rest of the group was also meant to be captured, but that didn’t happen.

Rezaren and Hira are ultimately two sides of the same coin. They both claim to love Miriam but are willing to use her for their own gain. They both don’t have any family and have this grand delusion of being on the right side of things, even though Hira is a potential mass murderer with her desire to burn the Imperium and salt its lands, whereas Rezaren is very much the product of his society. He claims that he considers Miriam and Neb his family but viciously lashes out whenever they don’t do what he wants.

Yes, Rezaren is dead in ‘Dragon Age: Absolution.’ The climactic sequence takes place right after Miriam and the others confront Hira. Rezaren arrives with a dragon and Neb and attempts to resurrect the latter with the Circulum and blood from himself, the dragon, and Miriam. Neb’s spirit even returns to the mortal world but chooses to destroy his body and the demon animating it, demonstrating that he shares Miriam’s view of their relationship with Rezaren. Miriam and Rezaren fight while Qwydion frees the dragon from Rezaren’s control. The fight ends when Miriam stabs Rezaren through his throat, killing him. 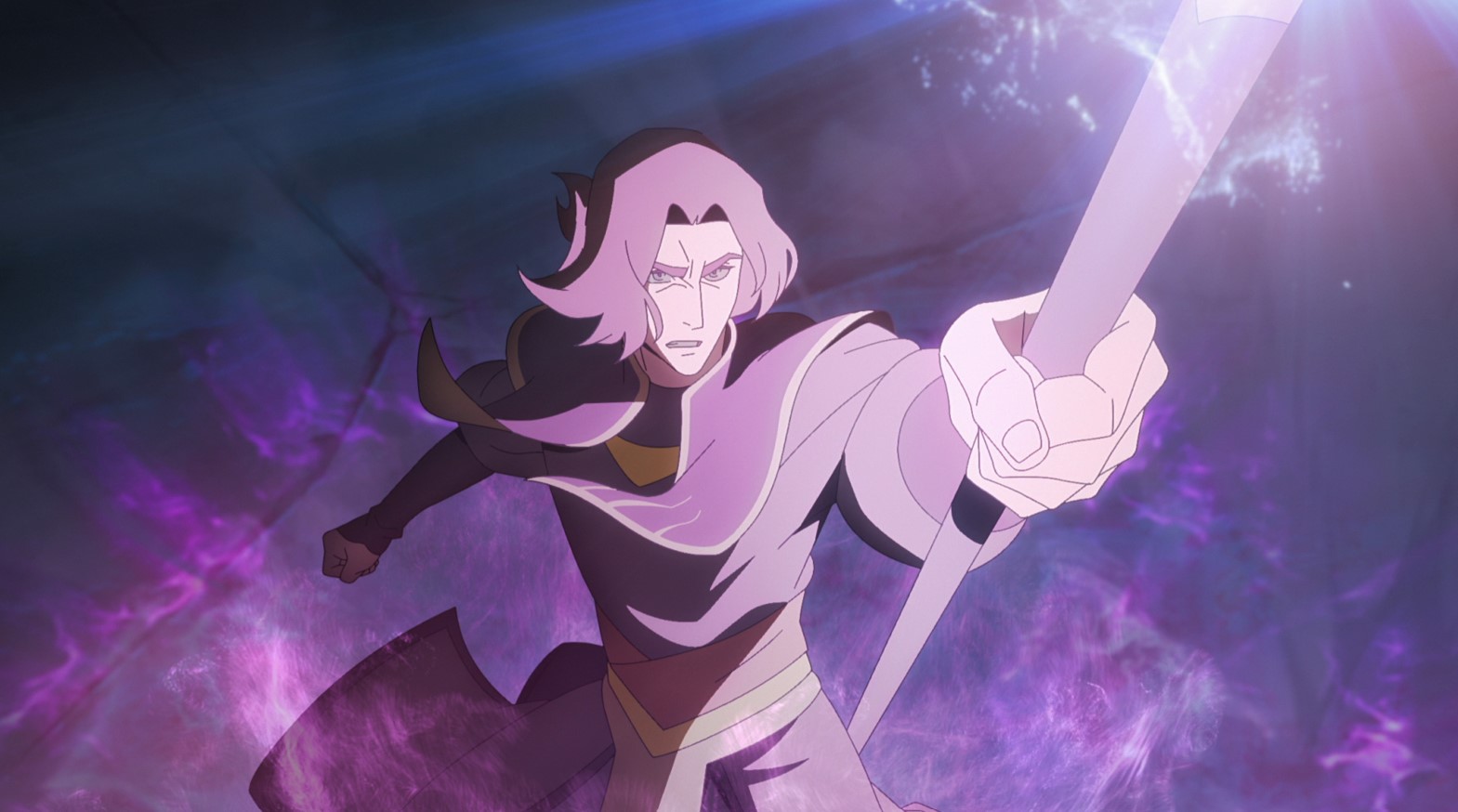 Rezaren is a fascinating villain. He clearly has the qualities of a hero, which are ultimately overshadowed by his character. Although Rezaren is clearly dead, we sincerely hope this isn’t the last time we see him. Given that a resurrection artifact is at the center of the narrative, it’s possible that he might return in prospective future seasons of the show or other entries of the franchise.

What Happens to the Circulum Infinitus? Who is the Crimson Knight?

Despite her initial excitement about joining the Inquisition, Hira became disillusioned with the order because they were reluctant to go to war with the Imperium as they were concerned about collateral damage. She eventually found someone willing to destroy the Imperium, and that’s the Crimson Knight. 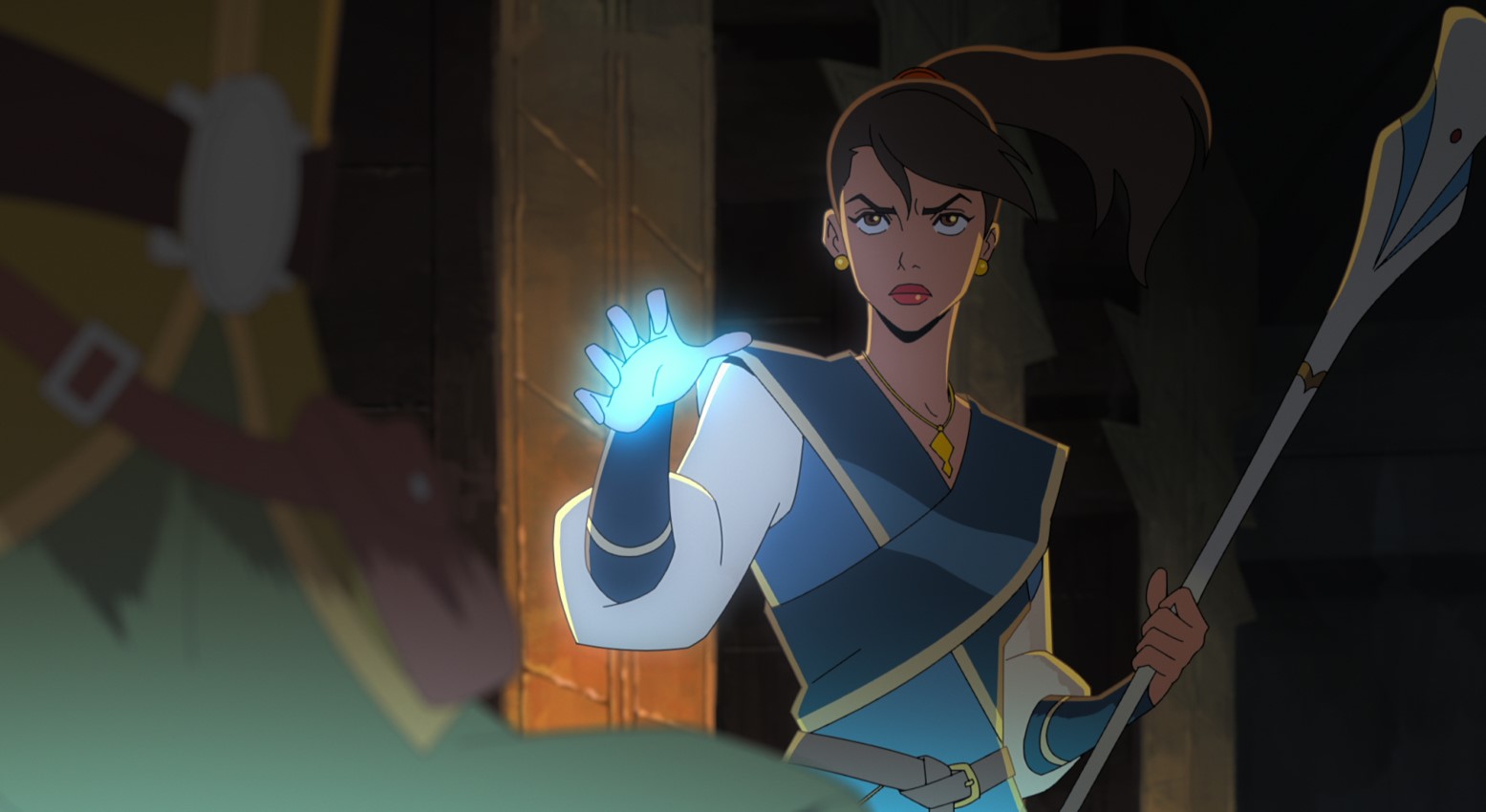 Although we don’t see the face of the Crimson Knight in the final sequence of the season, we do hear her voice, and that’s a big giveaway. The Crimson Knight is none other than Meredith Stannard. This is confirmed in the credits, where Jean Gilpin, the voice-over artist who portrays the character in the games, is listed opposite “Meredith.” Moreover, the Crimson Knight seems to be trapped within red lyrium, just like what happens to Meredith at the end of ‘Dragon Age II,’ following her defeat at the hands of Hawke, the champion of Kirkwall.

Meredith used to be the Knight-Commander of the Templars in the city of Kirkwall (basically a counterpart of Tassia). She transformed Kirkwall into a brutal police state, and the Templers under her command started to persecute the mages because of their use of blood magic. This eventually led to an open conflict between the two groups. Although they were initially reluctant to get involved, Hawke neutralized both Meredith and Orsino, the leader of the mages.