6 Games You Must Play if You Love Dragon Age 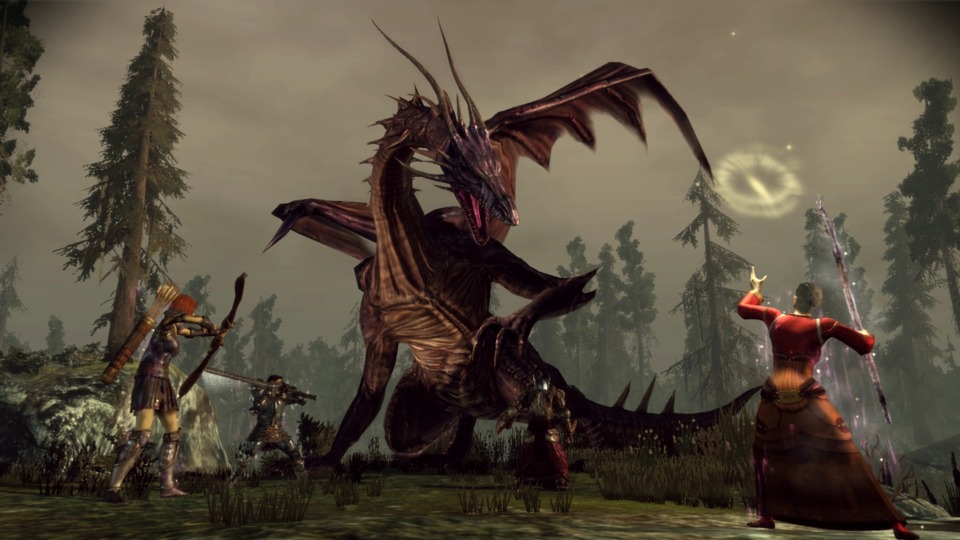 ‘Dragon Age’ is a very well made fantasy RPG that has managed to influence a lot of gamers worldwide to pick up their staves and unite in action. It is considered to be one of the best RPGs that you can play on modern consoles with over 3 main titles for PS, PC and Xbox. Due to the popularity of Dragon Age, a lot of games have implemented a more in-depth character customization mechanic in order to remain more relevant. However, ‘Dragon Age’ is not the only series that manages to put players at the helm of the action. There are several other games that have fantastic worlds to explore, powerful characters to master and mind-bending spells to be unleashed. So gather your staves and follow us as we delve into the world of Fantasy RPGs. Here is the list of video games similar to Dragon Age that are our recommendations. You can play these games like Dragon Age on PS4, Xbox One, Xbox 360, PC, iPhone, Android, mac or even online. 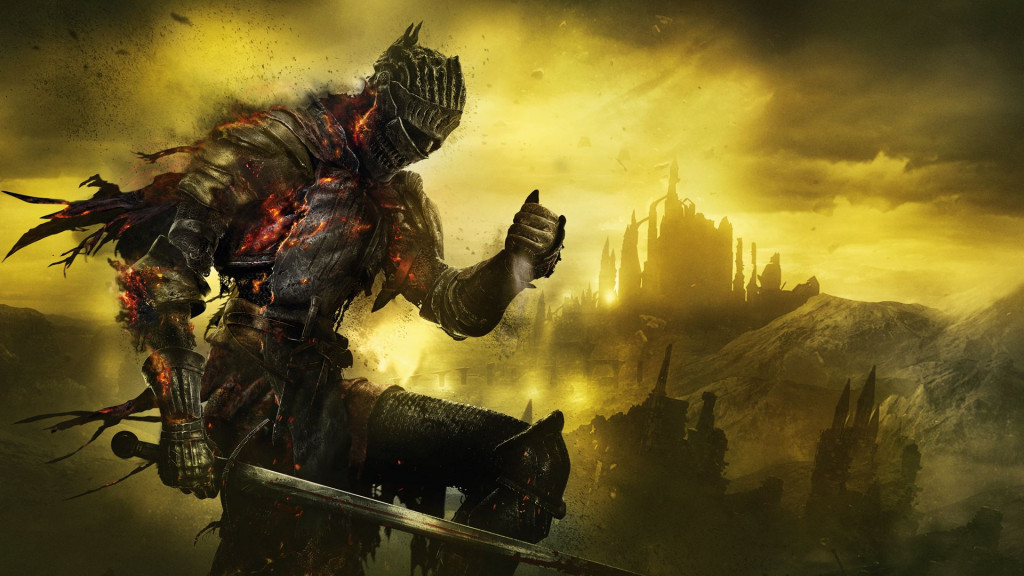 ‘Dark Souls III’ is the third major instalment in the ‘Souls’ series of games, a hardcore unforgiving action role playing experience developed by FromSoftware and published by Bandai Namco in the year 2016 for PlayStation 4, Xbox One and Microsoft Windows PC devices. It also happens to be one of the most commercially successful titles of the year with over two million copies of the game being shipped worldwide in the first two months alone. It is considered to be a fitting end to an epic trilogy, cementing its position in the video gaming industry forever.

Although the game is visually stunning on modern devices and contains all the role playing options you can hope for, the combat mechanics is where it really shines. It is one of the most fluid combat systems in all of video gaming history, with the characters moving precisely as you want them to. This does not make the gameplay any easier though, as it is considered by many to be one of the toughest games of all time. The bosses at every step have unique mechanics that you really need to get a feel for instead of clobbering away like a hack and slash title. You have to understand their strengths and weaknesses and then use that against them in order to take them out.

While in most other games, you are there dodging attacks till one moment when you move in and slash the hell out of the monster, in ‘Dark Souls III’, you are required to use precision and judgment. It’s like an act of deceit that you play and we very much love this aspect of the gameplay. However, it can get quite frustrating at times and with no active autosave slot available, you need to go back to your last saved checkpoint and start all over again. We definitely recommend this one to you if you like stuff like ‘Dragon Age’ but are looking for a bit more hardcore experience. 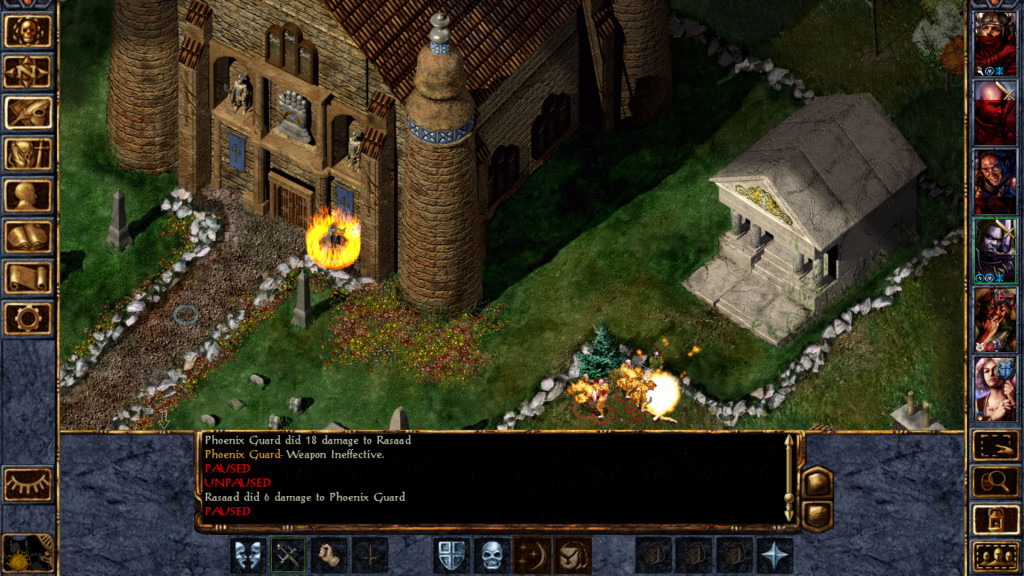 If you have played the original ‘Baldur’s Gate’ or have wanted to try the game out but couldn’t for some reason, then this is your best opportunity to do so. ‘The Enhanced Edition’ is a remake of the original Bioware title by Overhaul Games and was published in the year 2012 for android, iOS, Windows PC, OS X and Linux platforms. It also stays surprisingly loyal to the original one and this is something that has been appreciated by long time fans of the game. Not only that, it also manages to add a lot of elements to the existing game, optimizing the experience for modern consoles. These are all moves that show the community that the developers are vested towards the title and will only provide the best experience possible.

‘The Enhanced Edition’ contains both the original title and the expansion pack, and combines it all into one single definitive pack. An expansion was released for the remake version, titled ‘Baldur’s Gate: Siege of Dragonspear’ in the year 2016, that tells the story the events that let up to ‘Baldur’s Gate II: Shadows of Amn’. This is surprisingly a lot of content for a remake and hence it stirred up the community quite a bit. However, most of it has been well received by fans, with praise mostly directed towards keeping the gameplay fresh while staying true to the original title. 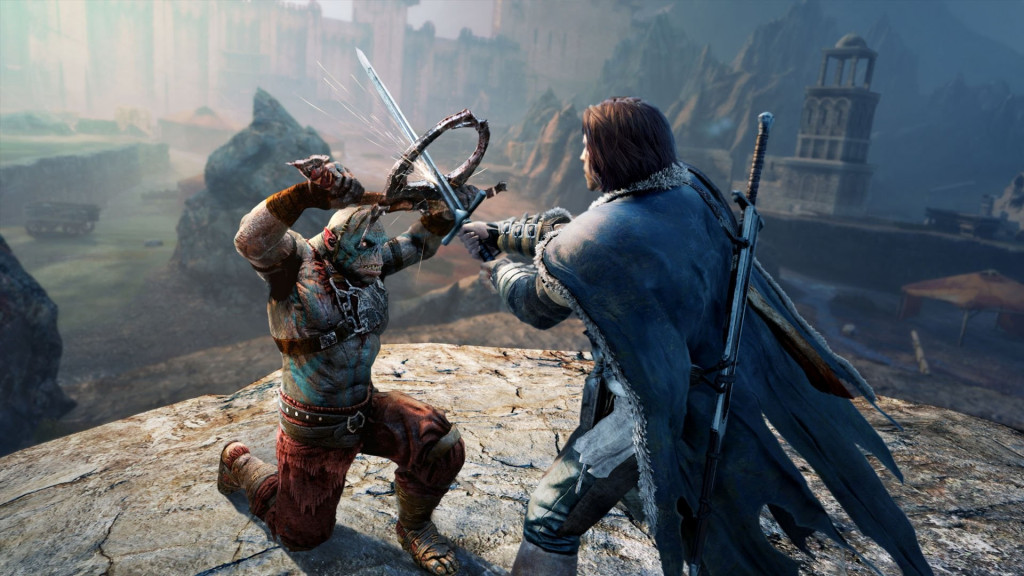 ‘Lord of the Rings’ fans? Well, we know there are always a few hanging around here, so let’s just throw this out there before they start raging! ‘Middle Earth: Shadow of Mordor’ is an epic open world action adventure video game developed by Monolith Productions and published by Warner Bros. Entertainment in the year 2014 to major critical acclaim. You play as Talion, a ranger who’s after the forces of Sauron, who murdered his wife and children. However, this is not an easy task as Sauron always manages to elude your presence and sends his forces against you instead. This is where the developers introduce a brilliant new mechanic known as the nemesis systems. This interface has the ability to track those orcs that manage to take you down and results in them getting promoted in their own ranks. Therefore, any captain who manages to kill you will be rewarded and gets even stronger on their next encounter.

However, if you manage to take down a stronger foe, the system rewards you with greater rewards and more experience points. Hence, there is always an incentive to go after the captains and take down strong opponents. The system is beautifully crafted and extremely intuitive, adding much more immersion to the existing gameplay. Taking down enemy captains is not only rewarding when it comes to loot, but it also damages Sauron’s army, significantly weakening specific spots in the defences. All of these features make it an exceptional open world experience and we highly recommend it to you if you are looking for something similar to ‘Dragon Age’, although from a third person perspective. 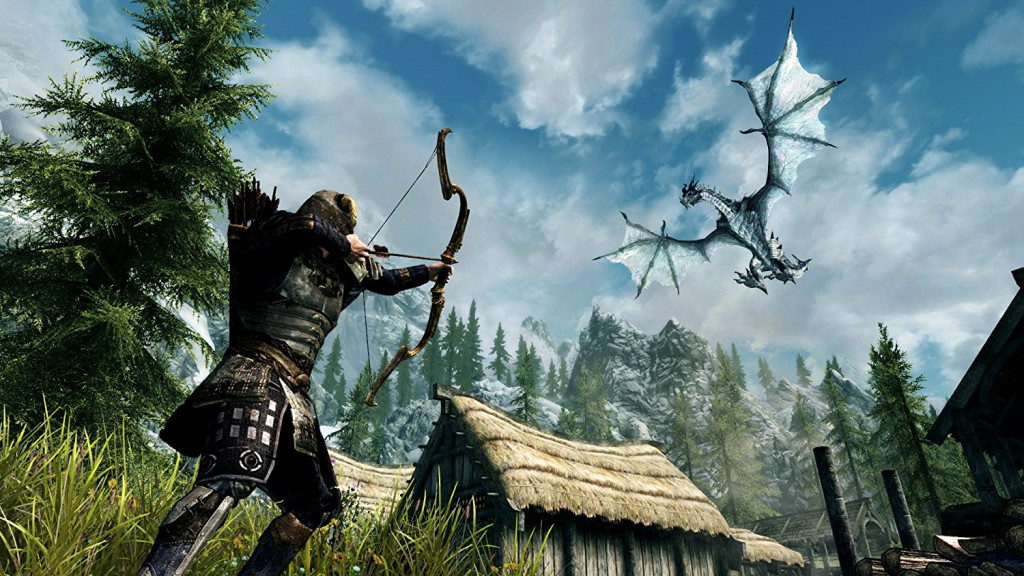 ‘The Elder Scrolls’ is one of the most popular game series of all time that has managed to remain relevant over the years due to its addictive gameplay element and excellent depiction of a fantasy themed universe. ‘Skyrim’ is the fifth major instalment in the long running series and similar to the other entries in the series, it enables the players to play through the campaign at their own pace. It is this open ended aspect that has made this game so popular among fans of the genre and has also spawned numerous mods that totally change the gameplay.

You start off with an epic cinematic intro but as soon as the tutorial gets over, the game hands over all control back to you. From this moment on, you are free to explore the world of Skyrim as you choose. Want to spend a day exploring the area and completing side quests? Or perhaps you feel like taking on the steam and fighting a dragon? The choice is yours! The attention to detail is something that should really be brought to notice here. All the NPCs within the game, all the citizens that you see roaming around have a life. They all go to jobs, come back home, have dinner and then go off to bed. If you follow a character long enough, you will find that they get married and eventually have kids who grow up.

Furthermore, Bethesda has developed a whole new language for this game alone, which is perfected down to the last syllable. It is completely possible for one to learn it and then speak the tongue to interact with others who know it. Quite a fun way to spook out your friends at a party! No matter what you find yourself doing within the game, it turns out to be one memorable experience and hence we urge fans of ‘Dragon Age’ to try this one out at least once. 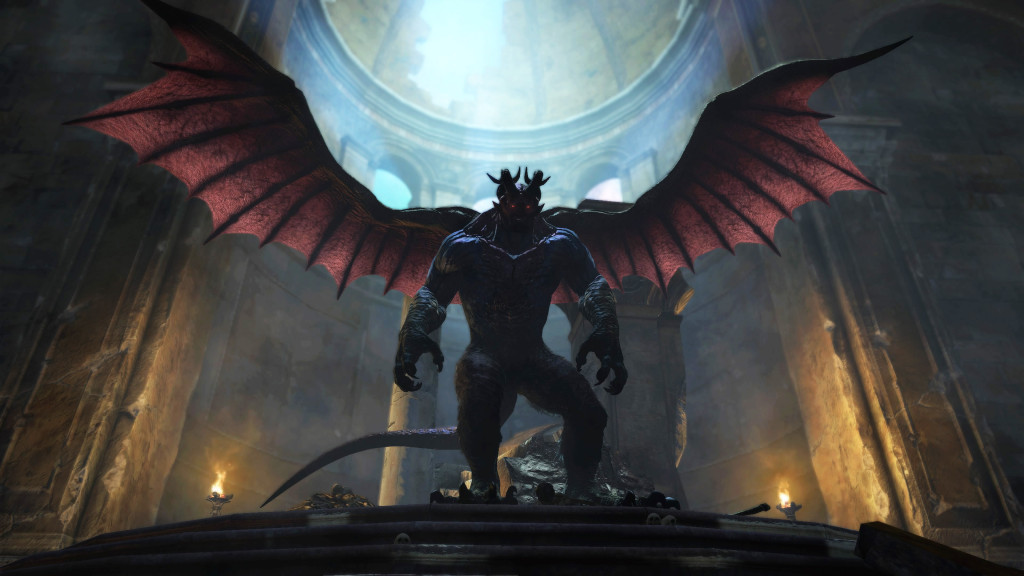 ‘Dragon’s Dogma’ is one of the best alternatives to ‘Dragon Age: Inquisition’, but we highly recommend it to people who are coming from the original two titles as well. ‘Dragon’s Dogma’ is an open world action adventure role playing video game developed and published by Capcom in the year 2012 for PlayStation 3, PlayStation 4, Xbox 360, Xbox One, Microsoft Windows PC and Nintendo Switch platforms. It is regarded as one of the best fantasy themed titles of the year and has spawned a sequel too, known as ‘Dragon’s Dogma Online’.

However, the sequel is released only in Japan, with no plans to be released worldwide; so you either have to get into devious means to get into the server or be stuck with Japanese speaking people all the time. And the fact that the online version of the game is a MMORPG, does not help. Hence, we are stuck with the original ‘Dragon’s Dogma’ and its single player campaign. However, this is nothing to crib about since it does have some of the best non-linear progression styles in any open world games. You are able to take time out, explore the world of Gransys and interact with the various NPCs within the game to find out more about the culture and progress through the storyline at your own pace.

You play as ‘The Arisen’, a chosen one who must go on a perilous quest to take down the great black dragon who threatens to destroy the whole world. However, you are not alone and are accompanied by three other characters who help you during combat. Some of the enemies and the bosses within the game really stand out with unique skills and abilities that really surprise the player the first time they encounter it. We highly recommend it to fans of ‘Dragon Age’ and we are confident that they will definitely be able to connect with it. 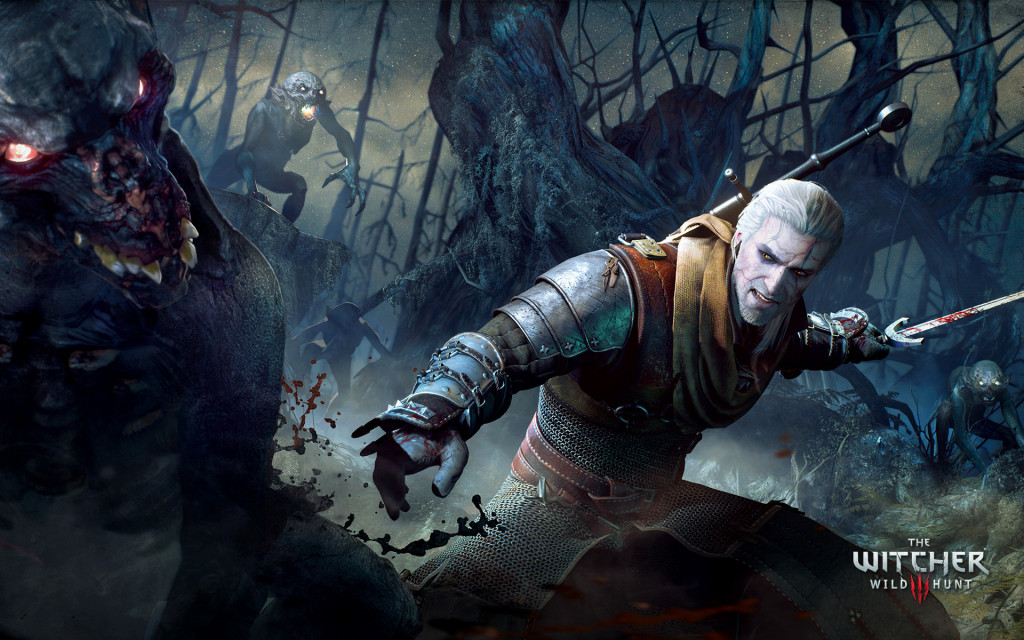 ‘The Witcher’ is a series of open world action adventure role playing game based on the novel by Polish author Andrzej Sapkowski of the same name. ‘The Wild Hunt’ was developed by CD Projekt Red and published by CD Projekt in the year 2015 and is the third main instalment in the series. It continues with the story of Geralt of Rivia, a witcher, and his lover, Yennefer, a powerful mage. Witchers are bounty hunters who kill other monsters for money. These monsters can be of any type since the world of ‘Witcher’ is inhabited by the deadliest beasts that you can imagine. Geralt is one of the last remaining witchers who can perfectly control the various elements in order to take down their foes. In addition, Geralt can also temporarily boost his powers by drinking various potions. Witchers are adept at alchemy and Geralt is no different, crafting and shooting down potions on the go.

During the course of the gameplay, you come across various ingredients scattered all over the game world. Keep an eye out for any of these collectibles since they affect your gameplay later down the line, when supplies are extremely crucial. No one wants to take time off and roam around the world for 45 minutes collecting items and crafting potions, so remember to collect them as you go. In addition, the role playing aspects are pretty in-depth and require one to carefully go through all of their abilities and inventory in order to figure out the best rotations or combos.

However, if you ever get tired to storyline quests, then there are a bunch of different activities that you can take part in. The world design is exceptional and always rewards the player for going the extra mile; something that is very important in open world games. We highly recommend this to you if you are looking for something similar to ‘Dragon Age’, since this is one of the best role playing open world games out there that’s available on modern consoles.