Earthworm Jim 4: Everything We Know 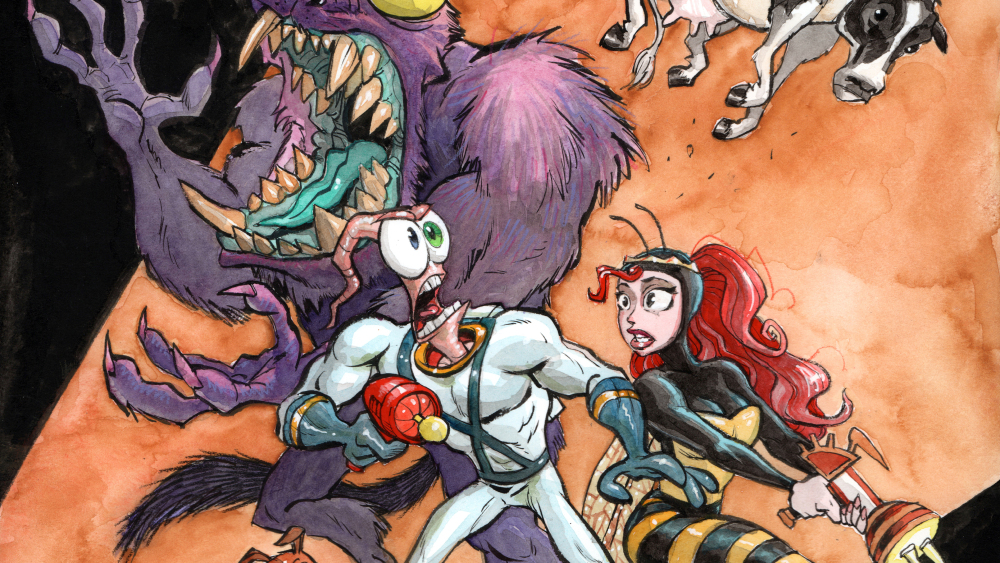 When you think about the classic platformers of the past, the first names that come to mind are probably Mario, Sonic or Megaman. However, one beloved franchise that is often overlooked in this conversation is ‘Earthworm Jim’, a series of light-hearted, humorous games that pokes fun at the ubiquitous cliches of the 1990s platformers.

After over two decades of anticipation, it looks like a new sequel titled ‘Earthworm Jim 4’ is just around the corner. Read on to find out everything we know about the return of video gaming’s most illustrious worm based character.

Earthworm Jim 4 Gameplay: What to Expect?

The ‘Earthworm Jim’ franchise is a series of side-scrolling platforming video games with run and gun elements. The main protagonist is the eponymous Jim, a sentient earthworm who wears a high tech robotic suit and represents the good guys in the battle of good vs evil.

The first game in the series titled ‘Earthworm Jim’ came out in 1994 for the Sega Genesis/Mega Drive and Super Nintendo Entertainment System, and later for the Nintendo Game Boy, Sega Game Gear, Microsoft Windows 95 in 1995. The game featured a fairly simplistic plotline involving a regular, everyday earthworm called Jim who attains human-like sentience and superpowers when a super-suit falls on him from the sky.

‘Earthworm Jim’ was something of a parody of the classic 2D platformers of the era such as the Mario games. This is apparent in the game’s goofy character names, designs, and even personalities. Princess What’s-Her-Name herself is a spoof of the unmemorable female princess characters in the 90s platformers who were generally little more than a plot device used to drive the game forward.

The gameplay is a classic side-scrolling run and gun fun, with the player maneuvering Jim across a series of 2D levels while navigating obstacles and dodging enemies. There is also a basic combat system that allows Jim to shoot at his enemies using his gun or whip them with his head. The whipping maneuver is also used in the game’s platforming sections to grab hold of and swing, from certain hooks in the game.

A sequel titled ‘Earthworm Jim 2’ came out one year later in 1995 for the Sega Genesis/Mega Drive and the Super Nintendo Entertainment System with a plotline very similar to the first. Jim must rescue Princess What’s-Her-Name once more while contending with enemies such as the intergalactic bounty hunter Psy-Crow. However, several improvements were made to the gameplay including greater gun variety, level variety and the addition of a traveling sidekick named Snot.

Multiple production difficulties and nearly half a decade later, the first-ever 3D game in the franchise called ‘Earthworm Jim 3D’ released for the Nintendo 64. The new game features an all-new storyline involving Jim going into a coma after being hit by a flying cow. He awakens within his own subconscious, which is now populated by his old nemeses. To escape this living nightmare, Jim must find the Golden Udders of lucidity and face up to the personification of his trauma – Jim’s alter ego, Earthworm Kim.

As for the upcoming ‘Earthworm Jim 4’, it is hard to state anything definitively given the time that has passed since the last game in the franchise, and the unknown nature of the game’s home platform – the Intellivision Amico. However, we can certainly expect the fundamental franchise traits such as wacky villains, forgettable princesses, a heroic Jim, a greater variety of weapons and oodles of humorous charm.

The game has been confirmed to be presented from a classic 2D perspective. Given that it has been over 20 years since the last game in the franchise, ‘Earthworm Jim 4’ will undoubtedly feature upgraded visuals with better resolutions, anti-aliasing, and shaders. However, the upgrades will be dictated by the relatively modest hardware found in the Intellivision Amico.

One possible premise outlined by Shiny Entertainment founder David Perry in 2012 involved a now retired and grossly overweight Jim, donning his persona as a superhero once again to tackle an all-new threat, or quite possibly to save Princess What’s-Her-Name once again.

‘Earthworm Jim 4’ also features a local split-screen multiplayer mode to play with your friends, which could hint towards the presence of a sidekick character much like ‘Earthworm Jim 3D’s’ Snot.

Earthworm Jim 4 Developers: Who Are the People Behind It?

The ‘Earthworm Jim’ franchise was created by the now-defunct Laguna based American video game developer Shiny Entertainment. Although now operating under a different banner, the original ‘Earthworm Jim’ team consisting of creator Doug Tennapel, designer David Perry, artist Nick Bruty is said to be working on the new game.

Other returning members include Tommy Tallarico, Mike Dietz, Tom Tanaka, and Joey Kuras. All in all, ten members of the original team are credited with the development of ‘Earthworm Jim 4’. The game will be published by the American developer and publisher, Interplay Entertainment, who also published 1999’s ‘Earthworm Jim 3D’.

Earthworm Jim 4 Release Date: When And Where Can I Play It?

While we do not know when exactly ‘Earthworm Jim 4’ will come out, we do know that it will be sometime after the launch of the Intellivision Amico console in October 2020. The Intellivision Amico is a new console seeking to cash in on the rising popularity of retro games by providing an authentic vintage experience with modern bells and whistles.

The Amico utilizes a modified Android/Linux operating system and features Wi-Fi, Bluetooth, USB and SD card functionality as well as a fully-featured wireless controller. It is set to launch on October 10, 2019, with a starting price of approximately $200.

‘Earthworm Jim’ has been confirmed not be a launch title for the Amico, which means that a 2021 release appears most likely.