Eddie Jackson From Christmas Cookie Challenge: Everything We Know

Eddie Jackson is an American chef and former football cornerback. He rose to fame after joining other talented chefs on the ‘Food Network Star’ in 2015 and beating them all. The co-host of the ‘Christmas Cookie Challenge’ has a unique background and a tragic episode that brought him on the culinary path. What we found out about his career choices before he became a television personality might surprise you!

Born on December 19, 1980, Eddie Jackson recognized his passion for football at an early age. In 2004, he got the opportunity to play as an undrafted free agent with the Carolina Panthers. He pursued his graduation at the University of Arkansas and continued to play the sport. At both cornerback and strong safety slots, he was the one to start 21 out of 47 games. During the years 2005 and 2008, he was signed by various professional football teams like Miami Dolphins, New England Patriots, and Washington Redskins. 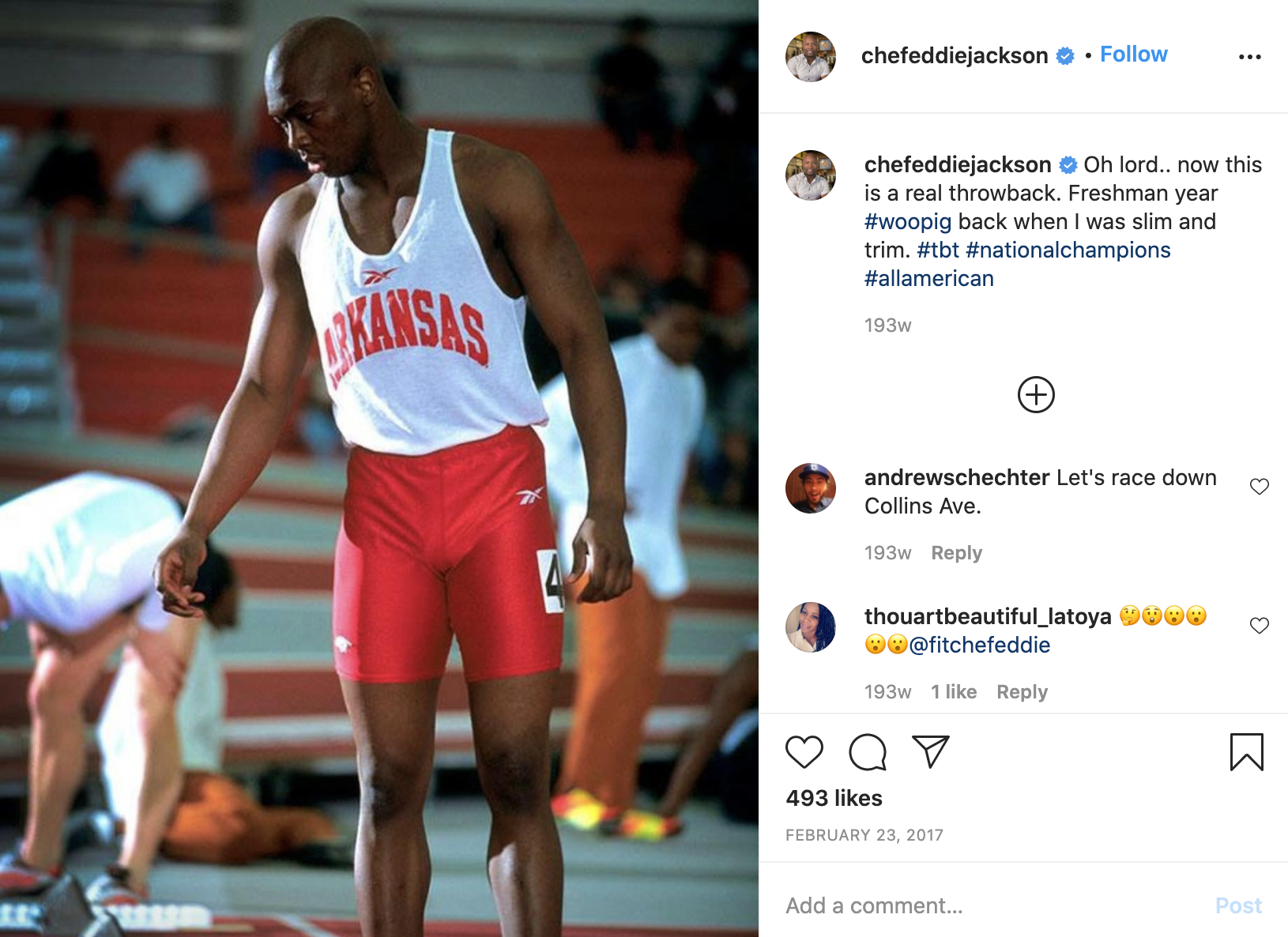 He has also won four national titles in Track and Field and still holds the exceptional freshman record for the 110 high hurdles. Unfortunately, the former NFL pro had to give up his illustrious career as a footballer and sports personality due to a severe physical injury at the age of 28. His father motivated him to amalgamate his love for food and fitness to give a new direction to his life.

The torn anterior cruciate ligament did not vandalize Eddie Jackson’s spirit to achieve greatness in life. After retiring from football, he bought a gym and started running the business as well as working as a personal trainer in it. Additionally, with a little nudge from his father, he began to practice and hone his second skill, cooking. Before his stint on the Food Network channel, he owned and operated a food truck – Caribbean Grill.

From the thrill he got after appearing on MasterChef season 4, the entrepreneur knew that it could be his next big thing. Eddie made his mark in the television world in 2015 and has achieved new heights since then. After beating 11 of his fellow finalists on ‘Food Network Star,’ he teamed up with Iron Chef Alex Guarnaschelli in 2016 for mentoring eliminated contestants. As a reward for winning the reality show, Eddie landed the opportunity of being a presenter of his very own cooking competition series, ‘BBQ Blitz.’

Although ‘BBQ Blitz’ ran only for six episodes, Eddie bagged another show soon. He has been a co-host on its spinoff series, ‘Kids BBQ Championship,’ which has been a hit since its inception on May 23, 2016. Another popular series, ‘Christmas Cookie Challenge’, is running into its fourth season with Chef Eddie and “The Pioneer Woman,” Ree Drummond, as its presenters.

The ‘Food Network star’ winner, Eddie Jackson, has all cameras fit into his kitchen but none into his personal life. After emerging victorious in the show in 2015, Eddie candidly spoke about his girlfriend, who encouraged him to follow his passion for cooking right after moving to Houston. He also shared how composed she remained despite the female judges and diners incessantly complimenting his looks and physique.

The TV personality has never revealed anything else about the mystery woman or if he is still in a relationship with her? Other than this, Eddie has also confessed to having dated a Jamaican hostess who used to work at PF Chang’s in Miami. She is the one responsible for making him fall in love with “jerk chicken.” But he has never elaborated on any of his previous relationships nor revealed his current dating status.

Read More: Is Ree Drummond Married? Does She Have Children?