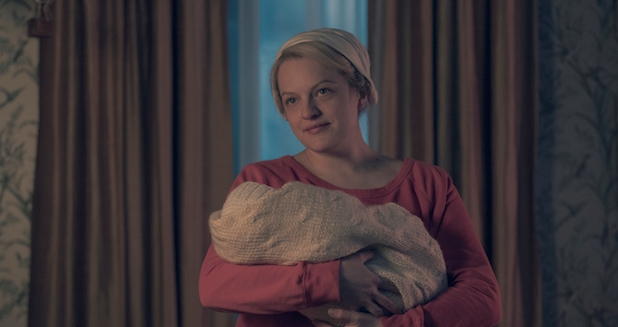 Hulu seems to be on top gear as the streaming service hit headlines with back-to-back announcements. The latest additions are the official trailers for the season three of its flagship series ‘The Handmaid’s Tale‘ and first look of ‘Veronica Mars’ season four. Both the trailers are unveiled as part of Hulu’s upfront presentation on Wednesday. In ‘The Handmaid’s Tale’ trailer, Elisabeth Moss returns as her iconic character June, along with the red and white Handmaid’s uniforms.

June gives the impression that she will follow her season two finale decision to stay in Gilead rather than escape to Canada in the trailer. The first look hints at an internal conflict, with June enlisting other handmaids to execute her scheme. Even Yvonne Strahovski’s Serena Joy seems to be interested in June’s moves. “You have influence,” June tells Serena in the trailer. “Up to a point,” she replies. “So move the point,” June answers.

The trailer also reveals Aunt Lydia (Ann Dowd), Nick (Max Minghella) and Luke (O.T. Fagbenle) for the first time after the season 2 finale. There are hints that the Commander (Bradley Whitford) takes a prominent role in the third season. The trailer implies that June and Nick have still maintained a sort of intimacy. In an interview after the second season, showrunner Bruce Miller revealed that the upcoming season 3 will revisit the past. “We will be revisiting the Colonies. It was really a such a stunning achievement in terms of art direction and cinematography and directing,” Miller said. “It was so beautiful and I would love to continue to dive deeper into how Gilead uses the discarded women.”

“In terms of Jezebel’s also, I would really like to return to Jezebel’s. The machinations of that place were so fascinating, kind of just everything about it was seen, kind of made into this concentration that you have in one place,” he added.

Check out ‘The Handmaid’s Tale’ season 3 trailer below.

The streaming platform has also released the first look teaser of ‘Veronica Mars‘ during the upfront presentation. The cryptic teaser is the first look of the detective series’ eight-episode fourth season. Neptune is under a wave of bombings and new crimes and all the Spring break parties are devastated by the attacks. Veronica, played by Kristen Bell, is commissioned by a victim’s family to investigate the events. The teaser also shows the returning stars, Jason Dohring and Enrico Colantoni. The new cast members Patton Oswalt and J.K. Simmons also appear in the teaser. Created by Rob Thomas, ‘Veronica Mars’ reportedly delves into the class divide in Neptune in the fourth season.

Check out ‘Veronica Mars’ teaser below.