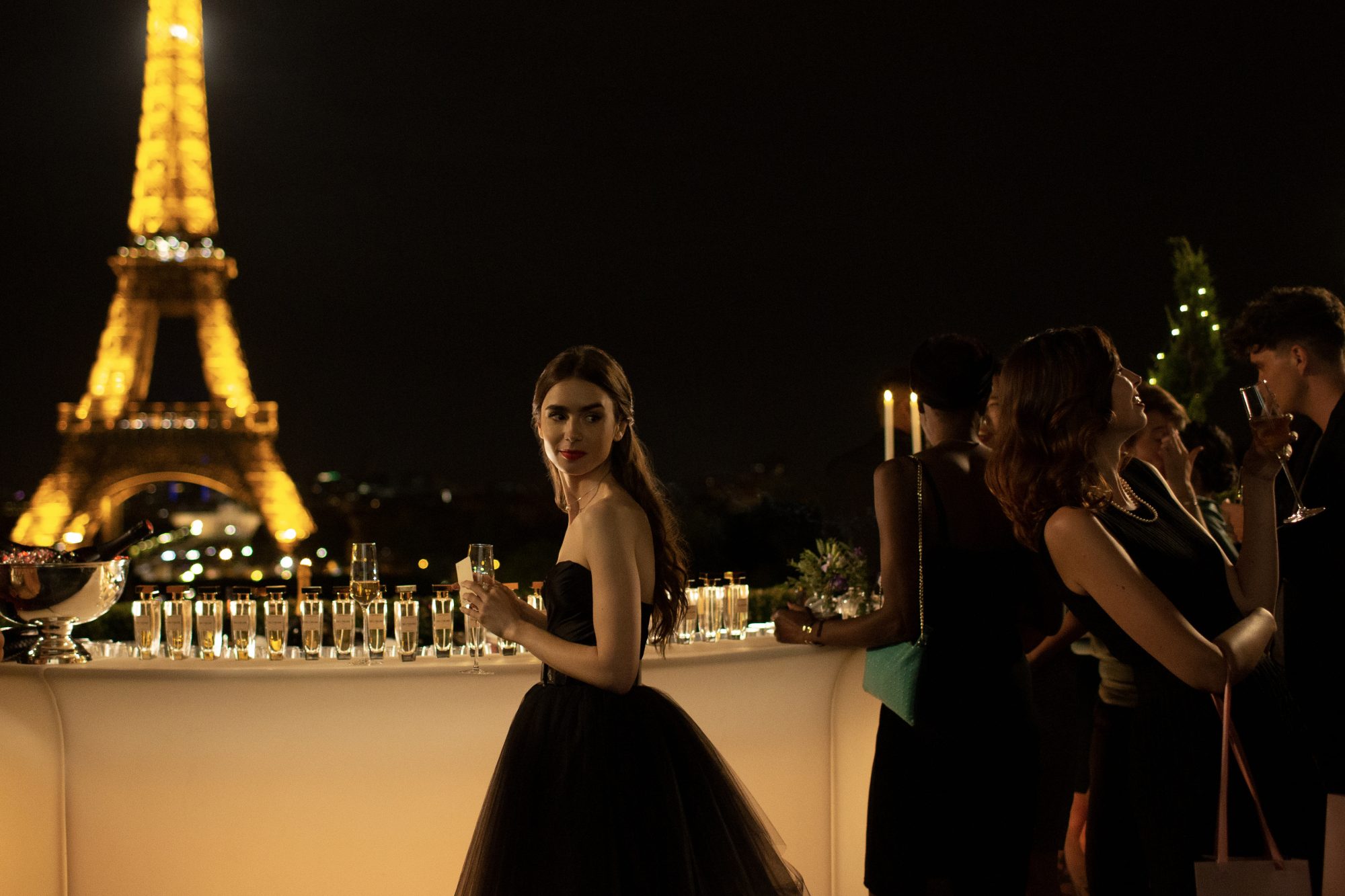 For all of us who have drooled over the glamorous life of Carrie Bradshaw from Sex and the City and Andrea Sachs from The Devil Wears Prada, Emily in Paris makes a perfect indulgence. Patricia Field, the costume designer brings her A-game with this series and adds to the charm.

The creator, Darren Star dives head first into the genre of romantic comedy with the extra dose of romance from Paris itself. The story takes us through the beauty, glamour, and interesting Parisian culture through the lens of a young millennial who moves to Paris from Chicago. Emily Cooper, played by Lily Collins is a delightful character with a punch. Collins is seen here playing the enthusiastic young lady in her twenties, constantly troubleshooting fiascos at work and trying to keep things “tidy” in her love life.

Emily Cooper is in a way the American in Paris who struggles to fit in. However, she is quite a sensation as @emilyinparis on social media, which opens up opportunities for her. Her wit and quick thinking eventually win people over who are amazed at how she charms her way into their lives.

The season starts with Emily taking up her dream job in Paris as a marketing executive for a French firm that her company in Chicago bought. She is taken a little off guard since it was her boss in Chicago who was offered the job but is unable to follow through due to developments on the personal front. As a result, Emily is not as well prepared as she would like to be but that doesn’t dampen her spirits and excitement over her new role in the City of Lights. She comes across as an instant disappointment to her French colleagues as they were expecting her boss from Chicago who is well versed in French. Little did they know that with her go-getter attitude and charming personality Emily will prove to be an asset to them, eventually. This does not mean that Emily is not walking the tight rope as her boundary between personal and professional lives blur. But then what is fantasy if not taking a plunge outside your comfort zone?

The end of the show is just like everything Emily’s boss, Sylvie (Philippine Leroy-Beaulieu), keeps teasing her about- a happy ending, somewhat. But this brings its own set of complications. For one, Gabriel (Lucas Bravo) and Emily finally gave themselves a shot with each other. Gabriel and Camille (Camille Razat), also Emily’s friend were breaking up because he was leaving Paris to own a restaurant in Normandy. But Emily is with Mathieu and had mentally prepared herself that Gabriel was going away which stirs up a lot of buried feelings towards him. But he ends up staying back since a professional possibility opened up for him. Like Emily says in the last episode of the season, “We never really had a chance.”

Antoine is interested in investing in Gabriel’s restaurant so that he can buy it and then Gabriel won’t have to move back to Normandy. One can see from the second episode itself when Antoine was introduced that he was impressed with Emily. It is difficult for Emily to navigate the boundaries of what is flirtatious and what is friendly and we see her struggling with those boundaries, especially with Antoine. Interestingly, Sylvie happens to be Antoine’s mistress which makes it even messier for Emily who likes to keep things “tidy.”

In the last episode, when Antoine is seen discussing being the investor for Gabriel’s restaurant, one can’t be sure if he is doing this because he is genuinely taken up with Gabriel’s culinary skills and sees a business opportunity or if it is something he is doing for Emily. He seems to have sensed some feelings between Gabriel and Emily.

Catherine, Antoine’s wife has a little chat with Emily at the celebratory dinner of Pierre’s successful show where she “approves” of Emily as a much better fit for her husband. There are quite a few things that Emily is till absorbing about the culture- one being the fact that it was common to have a mistress and usually the wife knows and approves, who too might have a lover. But like Emily’s friend, Mindy pointed out, it is much rather “tolerated than discussed.”

Emily had moved to Paris to work with Savoir, a marketing firm that exclusively works for luxury brands. The notion she had about herself being liked is bruised in the first couple of episodes. She is chirpy, adventurous, charming in her way, and can even be sassy at times, but the new colleagues were not impressed.

Accessibility seems to be the one thing Emily feels very strongly for- her belief of “opening doors,” as opposed to Sylvie who likes to keep things exclusive and closed, poses her as a threat to the way things worked at Savoir, which in French means ‘to know.’

“You have no mystery.” Sylvie had told Emily but as you will go through the season, you will realise that she is intrigued by Emily; impressed, needless to say. Things aren’t simple between them and their relationship kind of follows a love-hate wave because Sylvie doesn’t trust her with work and sometimes even sees her as a threat to her personal life. Sylvie is wary of something brewing between Emily and Antoine.

The next season will most likely see Emily working closely with Antoine as she is going to be in-charge of Maison Lavaux. Sylvie refused to work with Antoine over a rough patch they hit in their relationship and Luc made way for Emily to get back into Savoir when she was fired after the fiasco with one of the biggest clients, Pierre Cadault.

The issue with Pierre Cadault seemed very difficult at first but she managed to even get through to him- a person who everyone thought was unapproachable. She compelled him to see a new perspective for his brand image when he least expected it. Mathieu Cadault, Pierre’s nephew who manages business at the designer brand was enamored from the very first time he met Emily.

This season leaves us with many questions for the next season. First being, how will things change between the trio of Emily, Gabriel, and Camille? Emily and Gabriel are drawn back towards each other constantly but so are Camille and Emily. There were many instances in the season when Emily expected Camille to confront her about her budding romance with Gabriel but every time it turned out to be something else.

There is no denying that Camille and Emily are close too, so how will Camille take the news of Gabriel staying back in Paris and about Gabriel and Emily? As said in the conversation between Emily, Julien, and Luc, “happy endings are very American.” Emily does believe that “They (happy endings) give you hope and the hero wins in the end.” But the French outlook in life is different as quoted by Luc- “You can never escape life. Never.” Now with Mathieu in the picture as well, will Gabriel and Emily continue to be the tortured lovers who cannot be together?

Emily’s relationship with Mathieu could also sound trouble for her career at Savoir, if things were not to go well between them since Pierre Cadault is a precious client to the marketing firm. The season ends with Mathieu looking forward to a weekend getaway with Emily but her supposed goodbye to Gabriel turned intimate.

This also brings us back to the potential client- Camille’s family, who agreed to get onboard with Savoir to market their champagne. In addition to this, how easy will it get for Emily to work under the changed circumstances? Antoine’s wife approves of her to be his mistress, working for Pierre Cadault after overcoming a huge hurdle and now being involved with his nephew as well as getting involved with Gabriel, knowing that Camille’s family is a potential client?

Mindy (played by Ashley Park) is one of the first friends Emily had made in Paris who very soon became her go-to person for everything. They saw each other through many interesting phases. Mindy comes to live with her till she gets back on her feet since the job at the drag club as a singer did not work out for her. So far, she is the only one with whom things have been simple. This, and more we are yet to see unfolding in the next season.