The True Story Behind ‘End of Watch’, Explained 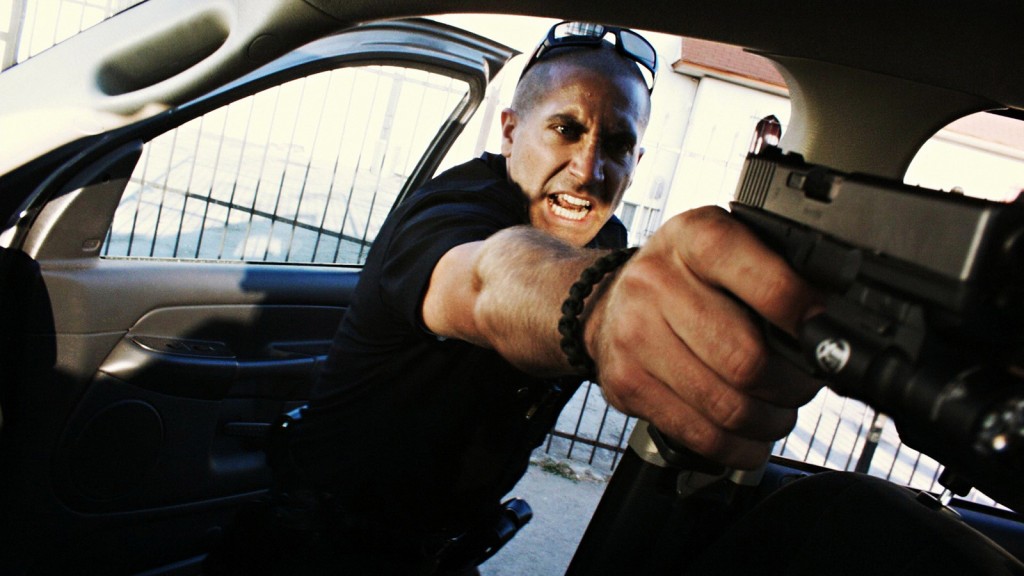 End of Watch is an action thriller movie directed by David Ayer and is based on two officers of the Los Angeles Police Department. Now, before you make a presumption based on the repertoire of David Ayer, known for making movies on the dark and corrupt side of officers, I would request you to stop right there. Because for real, End of Watch is nothing like ‘Training Day’, ‘Street King’ or ‘Harsh Times’. The movie is about two honest police officers, Brian Taylor (Jake Gyllenhaal) and Miguel Zavala (Michael Peña), their every-day duties, personal lives and their brotherhood.

“I was relieved. You make a movie and it’s like convincing people to go on an expedition with you.  You think you know where it’s going to end up, and you’re hoping and guessing.  But, when people trust you and get involved, based on that trust, it’s a really nice feeling to be able to have everything pay off,” said Ayer on the success of End of Watch. The movie is so perfectly balanced that if you watch it without knowing that Jake and Peña are real-life actors, you might be led into believing that it is some kind of docu-drama with real-life footage. Though the entire movie isn’t based on a true story, there are many aspects of the film that has been dervied from reality. Let us find out more. 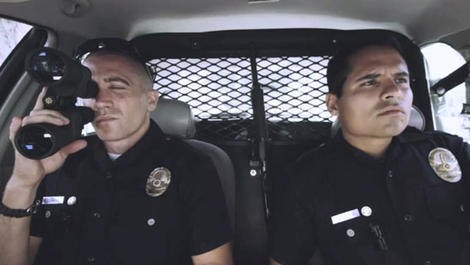 In the first few scenes, Jake puts a camera on the shelf and introduces himself. He then introduces his partner, Peña and another officer getting dressed in the dressing room. He wears a camera on his chest and makes his partner do the same. Over the entire movie, Jake is seen with a camera, recording most of his chronicles. His peers, seniors and detectives warn him not to but, he brushes them off saying that it’s for his social project. He even puts the camera in the legroom of their car.

The entire movie is in fact, shot like a combination of several found footage. In reality, 4 cameras were used simultaneously, out of which, one was handheld by Jake. You would also also be surprised to know that some of the scenes in the movie are shot completely by Jake Gyllenhaal. Most of the time, the actors during the shooting were unexposed and the traditional cameras were nowhere to be seen. It might just be the first movie to use actual footage from the cameras attached to the chests of the actors. 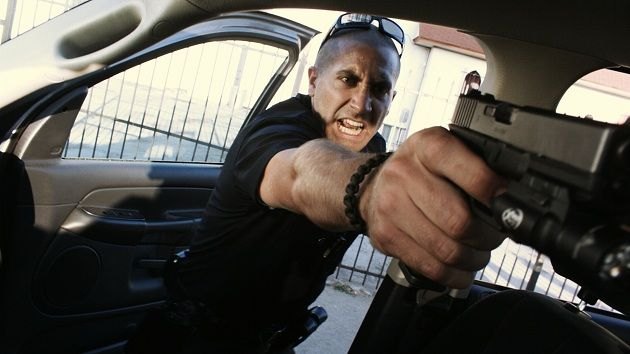 No matter how much Jake denies being a method actor, his previous roles as an obsessive journalist in ‘Nightcrawler’, intense professor in ‘Enemy’, homosexual shepherd in ‘Brokeback Mountain’ has proved time and time again that when Jake signs a movie, he does everything to bring conviction in his roles.

The same goes for End of Watch. Jake and Peña spent 5 months in training with LAPD. “We went on ride-along for five months, two to three times a week with the LAPD and sheriff’s department and Inglewood PD. We would work with them from about 4:00 p.m. to about four or five in the morning. Then we did tactical training about two or three times a week with live ammunition and training exercises, then fight training almost every morning with Dave Ayer’s best friend, who has a dojo, getting the crap beat out of us by 14 to 20-year-old kids,” said Jake in an interview. On the very first day of the training itself, Jake encountered a death during the busting of a drug racket.

Jake and Peña even went a step ahead and agreed to get tased. They believed it would help them bond better together and also because they had to choose between getting pepper sprayed (long-term effect with less pain) and tased (short-term effect with a lot of pain).

In the end, the training was so effective and Jake Gyllenhaal was so convincing as a cop, that even real cops on the street couldn’t identify him sometimes. A ‘four-finger signal’ is generally used to convey ‘everything is fine’ among cops. Jake used to show the sign of ‘code four’ to the passing cops and they used to throw it back at him.

Drug Cartel Is Based On Actual Crime Rings 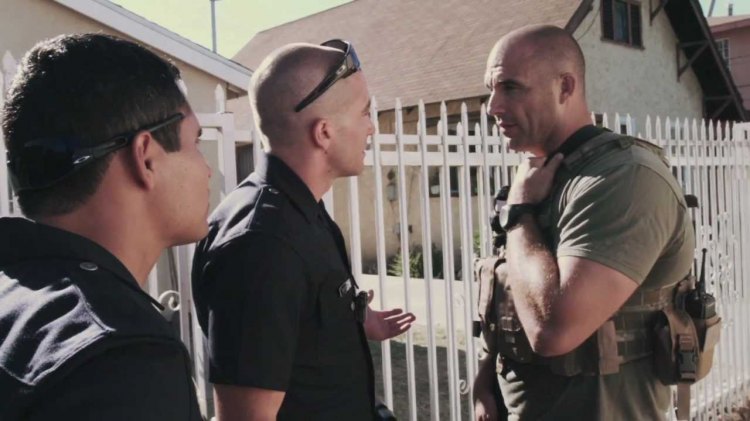 In the movie, it is a Sinaloa Cartel member, who out of revenge, hires a Latino gang to kill Taylor and Zavala. Sinaloa Cartel is an international and organized crime syndicate mostly known for drug trafficking and money laundering. It is considered as one of the most powerful drug trafficking organization in the world. Newton division, on the other hand, is considered as one of the most dangerous and deadliest divisions of LAPD. Over the years, there have been many criminal cases related to gangs in the Newton Division that is shown in the movie.

Sergeant Todd Bogart, who works in the LAPD Newton division shared his views about the film, “I think the movie portrays a lot of the reputation, a lot of the history of Newton. It incorporates the history of the division until now. It’s still one of the busier places to work, and it still has a high potential for violence, but right now we’re seeing very low numbers of violent crimes.”

The Real Friendship between Jack & Peña 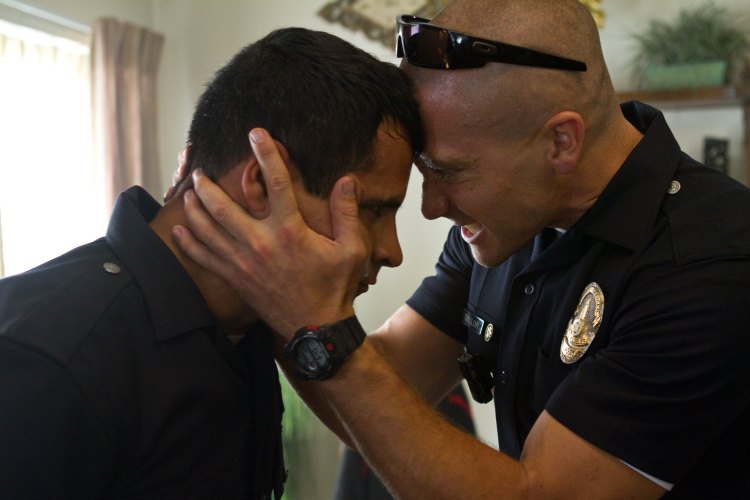 The main plot of the movie depends a lot on the bond shared between Taylor and Zavala. They are not just partners but each other’s extended family and like Taylor said in the end, brothers. It was important for David that both the actors gel well together. Though, the actors did not click at first at all. “It’s so weird hanging out with this guy knowing he’s going to be like your brother from another mother. It puts a lot of pressure on you,” said Peña in an interview. It took them 5 months of training to finally get along and create the kind of bond that is shown in the movie.

Jake, on his friendship with Michael, said, “We would see things happen and say: ‘well, our job is to observe it and then, absurdly, to fake it.’ Mike and I will always be close because of that.”

“There was this one incident – the crowd was around us and I just didn’t know what was going to go off. That’s the one time that we got along. I knew: OK, this movie can work. I knew Jake would stick up for me,” added Michael.

End of Watch is a perfect balance of all the emotions and really makes you believe in the authenticity of each and every character. From the very first scene of the movie featuring car chase to exchange of jokes among the officers to the couples’ joyful drunk conversations in the wedding to the deadly encounters to the final incomplete eulogy, every scene is shot to realism and has something to offer to the audience.