‘Escape Room: Tournament of Champions,’ directed by Adam Robitel, continues the story from ‘Escape Room’ (2019) in the form of another high-stakes game of life and death. With powerful performances from cast members Taylor Russell, Logan Miller, Indya Moore, Holland Roden, Thomas Cocquerel, and Carlito Olivero, the movie keeps the audience at the edge of their seats and delivers plenty of shocking twists.

It follows Zoey and Ben as they once again find themselves in Minos’ twisted game of escape rooms with other survivors. As their fight for survival reaches the last stage, almost everything we thought we knew is up for questioning. If you were left puzzled by the movie’s ending, don’t worry, we are here to sort out the pieces and form a clear picture for you. Here’s what goes down in the ending of ‘Escape Room: Tournament of Champions.’ SPOILERS AHEAD!

‘Escape Room: Tournament of Champions’ picks up sometime after the events of the previous film. Zoey is seeing a therapist to deal with the trauma from the escape room games. Her therapist asks Zoey what it would take for her to move on, and she replies seeing Minos brought to justice will help her come to terms with what happened. Later, she meets up with Ben, and they decide to travel to Manhattan, NYC. Zoey thinks an unlisted industrial building in Manhattan might be the base of Minos, where they could find proof to take down the evil company. Ben agrees to join her, but the duo drives to the city instead of taking a flight.

Near the building, a homeless stranger steals Zoey’s compass. Zoey and Ben chase the stranger through a subway station onto a subway train but are unable to get off before the train begins to move. Quickly, they realize that the subway cabin they are in is another escape room puzzle. The other passengers, Rachel, Brianna, Nathan, and Theo, are also survivors from different games. The group is trapped inside the subway cabin with no option but to play along.

Escape Room: Tournament of Champions Ending: Who Dies and Who Survives?

As the group progresses through the first escape room, Theo is electrocuted and dies. Next, the remaining players find themselves in a bank-like escape room armed with lasers that are activated by stepping on certain tiles on the way to the exit. The entire group manages to make it out of this challenge alive. In the next challenge, which has a beach setting, Nathan sacrifices himself to save Rachel. Zoey finds an alternative exit, and Ben and Rachel follow her while Brianna takes the regular exit. 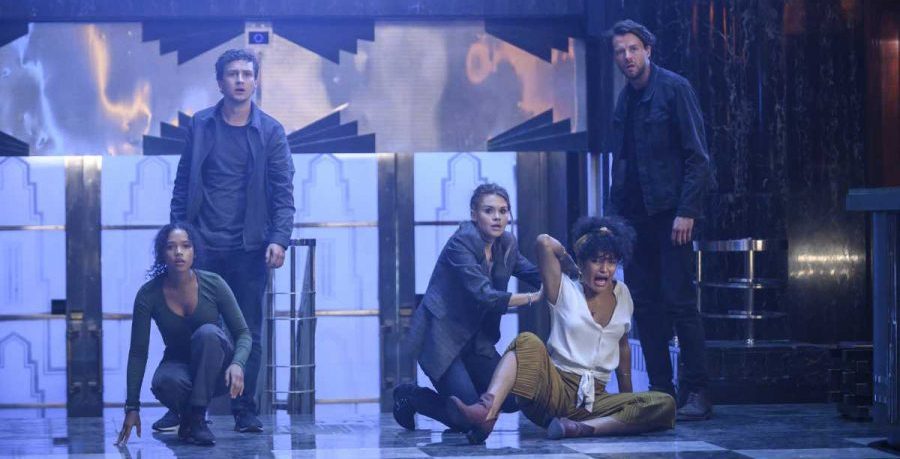 However, before he can reach the exit at the top of the lighthouse, the ladder shuts down, propelling Ben to fall into the collapsing room. Brianna, Zoey, and Rachel find themselves in an escape room that looks like a busy Manhattan street. Zoey is the only one who manages to escape as Brianna and Rachel get caught up in the acid rain. In the final escape room, a big revelation takes place. Amanda, who seemingly died in the previous film, is alive and actually designed the escape room puzzles for Minos. Amanda reveals that Minos kidnapped her daughter, Sonya, and forced her to become their architect.

We also learn that Ben is alive and trapped inside a glass cage connected to the final room. Amanda tells Zoey that Minos wants her to become their new architect and is using Ben as leverage. When Zoey refuses, Ben’s cage starts to fill with water. Before he can drown, Amanda helps Zoey to rescue Ben. The trio makes it out alive from the Minos warehouse and alerts the police. In the end, Rachel, Theo, Nathan, and Brianna have seemingly perished. However, we never actually see any of them die except for Theo. Nathan’s fate is similar to Ben’s, and the latter’s survival could mean that Nathan is also alive. Given that Amanda didn’t die in the previous film, Rachel and Brianna could also have potentially survived since their dead bodies are never shown.

Are Zoey and Ben Still Inside an Escape Room?

In the end, a law enforcement officer in charge of the case tells Zoey and Ben that they have sufficient proof against Minos thanks to Amanda’s testimony and the trio’s actions. Zoey and Ben are relieved to learn that those behind the horrible and twisted gladiator-style games will be held accountable. Believing the worst is behind them, they get on a plane. However, Zoey begins to question the series of events and realizes that they are inside another escape room. This is confirmed when the voice of the Gamemaster is heard mocking Zoey. 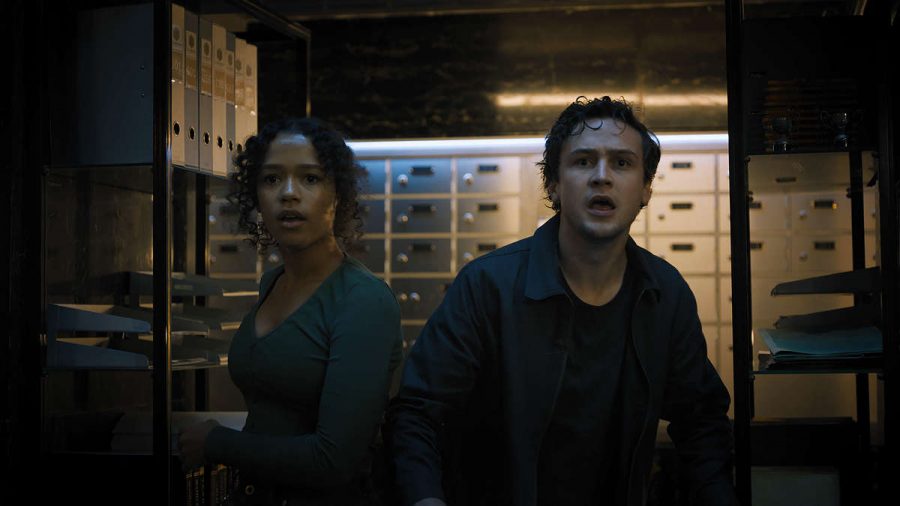 This plane-like escape room is most likely the simulator that we see at the end of the previous film. This hints that the entire ordeal was a trap set by Minos to get Zoey on the plane. The reason for Minos’ vigorous pursuit of Zoey isn’t exactly clear, but her ability to save others likely has something to do with it. It is possible that Minos wants to use Zoey’s skills to design escape rooms from which only one survivor will emerge. Thus, Zoey will help Minos remove the limitations of their escape rooms. We might get more answers in a potential sequel, but for now, we are sure that Zoey and Ben are inside another escape room puzzle.

The ending also highlights the scope of Minos’ operations. In the movie, we get a glimpse of the extent Minos goes to to blur the lines between reality and escape rooms. However, the final scene hints that the warehouse where the various escape rooms are kept inside shipping containers is a fake. The police station is likely also a trick, as is the news report that exposes Minos. The ending suggests that Minos carefully connects their escape rooms to real-world elements, which creates a sense of paranoia in the players’ minds. Thus, not only does the ending set up an exciting sequel but also underlines how truly devious and powerful Minos is.

Where Did Amanda Go?

In the third act, we learn that Minos is forcing Amanda to work for them. Her only hope of freeing herself is for Zoey to replace her as the architect. Zoey refuses, and Amanda is visibly distressed by this. However, she helps Zoey in rescuing Ben. We see her come out of the warehouse with the duo, but we do not see her at the police station. The officer in charge of the case mentions that Amanda has given her testimony to the police.

However, the entire police station setup is a potential ruse, and it is possible that Amanda went right back into Minos’ captivity. There is also a tiny chance of her escaping, but given that Minos has her daughter, she might have no option but to play along with the company’s plans. Nonetheless, Amanda’s absence in the final scene maintains the air of mystery around her character. We know for sure that Amanda is alive and probably knows more about Minos than she has let on.

Read More: Where Was Escape Room: Tournament of Champions Filmed?