In ‘Evangelion: 3.0+1.0 Thrice Upon a Time,’ Shinji is taken to a settlement where he, Rei, and Asuka reunite with older Touji, Hikari, and Kensuke. Deeply traumatized due to almost causing the Fourth Impact and the death of Kaworu, Shinji has become catatonic. Surrounded by friends and well-wishers, he gradually heals. But then destiny comes calling, and he must face his father, Gendou Ikari, once more. Here is everything you need to know about the ending of ‘Evangelion: 3.0+1.0 Thrice Upon a Time.’ SPOILERS AHEAD.

The film begins in Paris. WILLE operatives, led by Maya Ibuki, gain access into a black sealing pillar, while Mari Illustrious Makinami, in Unit 08, fight off a hoard of EVAs with the help of the Wunder fleet. Maya and her crew activate the pillar, forcing the core-conversion to retreat and freeing a large part of the city from its effect. Storage facilities belonging to NERV come out of the ground, and the WILLE operatives confiscate a large number of EVA spare parts and ammunition. It is revealed that they want to build a new Unit 02 and modify Unit 08 to be overlapping compliant.

The opening credits show Shinji, Rei, and Asuka making their way through the desolate red Earth. They eventually find a settlement established by keeping the core-conversion back. They meet their old friends Touji, Hikari, and Kensuke, all of whom have grown up. Touji serves as the settlement’s doctor, while Kensuke is the designated handyman. Touji and Hikari are now married and even have a child together. 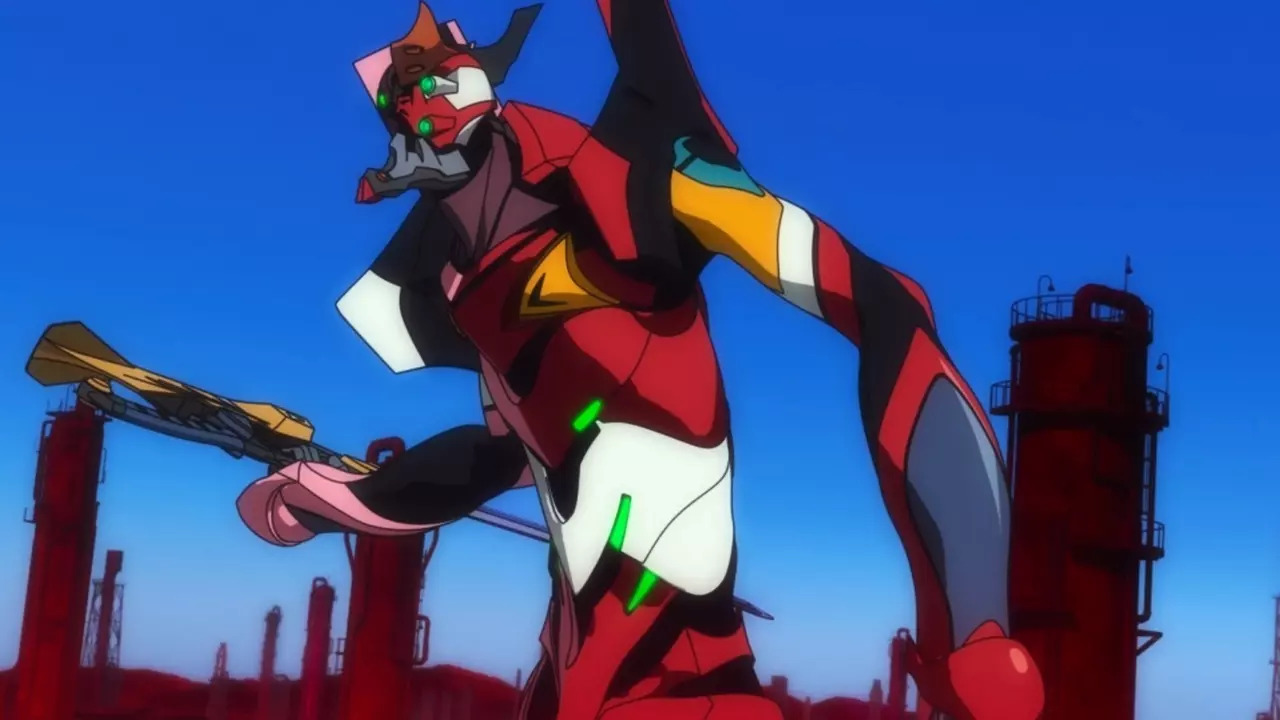 Among these people and others like them, this version of Rei Ayanami begins to find her humanity. After spending several days in complete shock, Shinji too starts to recover. Rei asks him to give her a real name, as everyone around her calls her “lookalike.” She finds out that she needs to be constantly exposed to LCL to maintain her human form. Shinji ultimately decides to call her Ayanami as well. But just after he tells her that, Rei transforms back into LCL.

The subsequent grief hits Shinji hard as ever, but this time, he gains control over it much faster than before. When the AAA Wunder lands to drop off the non-essential operatives, Shinji tells Asuka that he wants to accompany her and board the Wunder. She accepts and knocks him out. When he regains consciousness, he is put inside a blast containment chamber, where he is set to be kept until the mission involving Gendou and NERV is over. Among the crew of the Wunder, the response to this is predictably hostile. But it’s ultimately Misato Katsuragi’s decision, and she has allowed it.

Meanwhile, Fuyutsuki and Gendou take the Black Moon vessel to Antarctica to make Unit 13 operational again. After learning this, Misato and her crew launch a desperate mission to prevent The Fourth Impact from happening. Mari and Asuka take Units 08 and 02, respectively, and head out to destroy Unit 13.

No, Shinji doesn’t die in ‘Evangelion: 3.0+1.0 Thrice Upon a Time. The climactic fight of the ‘Rebuild of Evangelion’ tetralogy takes place at the very location where the Second Impact happened in Antarctica, which previously served as NERV’s Cavalry Base. Asuka, in Unit 02, manages to get to Unit 13 and tries to destroy it with an anti-core weapon, but an A.T. Field gets activated, preventing her from hitting the EVA in front of her.

Desperate, Asuka takes off her eyepatch and unleashes the power of the 9th Angel. However, it is soon revealed that this is exactly what Gendou wanted her to do. Unit 13 activates and destroys Unit 02. The Original of the Shikinami series appears before her, revealing that this Asuka is a clone. The Original claims that the Last EVA or Unit 13’s form mirrors that of God and asks Asuka to join her. As a last act of resistance, Asuka tries to blow herself up with her DSS Chocker but gets assimilated into Unit 13 instead.

Gendou has revealed to have merged with the Key of Nebuchadnezzar and seems to have transcended humanity. Ultimately, it falls on Shinji to defeat his father and prevent the Fourth Impact. With Misato’s permission, he leaves with Mari to confront his father. He calls forth Unit 01 and finds his father inside Unit 13 in the Anti-Universe, where human senses become pointless. As a result, LCL has manifested a virtual environment that Shinji and Gendou can perceive. As space and time are rendered immaterial, their fight isn’t limited by either. It even takes them to other ‘Evangelion’ continuities.

While they are fighting, Shinji continues his attempt to placate his father. He eventually succeeds and later helps Asuka, Rei, and Kaworu as well. Meanwhile, Misato sacrifices herself while preventing an additional impact. Shinji decides to recreate the world without Evangelions and gets ready to sacrifice himself for it. Right when he and Unit 01 are about to be impaled by the Spears of Cassius and Longinus, his mother Yui appears. It turns out that she has always been a part of him. Yui and Gendou, inside Units 01 and 13, respectively, willingly give their lives to fulfill their son’s dream. The EVAs revert to their animal and human forms, and the world becomes normal again.

What Is the Significance of the Rail Station Scene? Why Does the Film End with a Live-Action Shot?

In one of the final scenes of the film, the audience sees Asuka, Rei, and Kaworu waiting for a train. Shinji, now an adult, sits on one of the benches. Mari arrives behind him, and just like she has done before, asks him to guess who it is. This time, his guess is correct. She then helps him take off the Choker. As they head outside the station, the scene suddenly transforms into live-action. This implies that in his pursuit for a world without EVAs, Shinji has come to the real world and brought his friends along with him. The EVAs don’t exist in this world, and Shinji and his friends can finally find some peace.