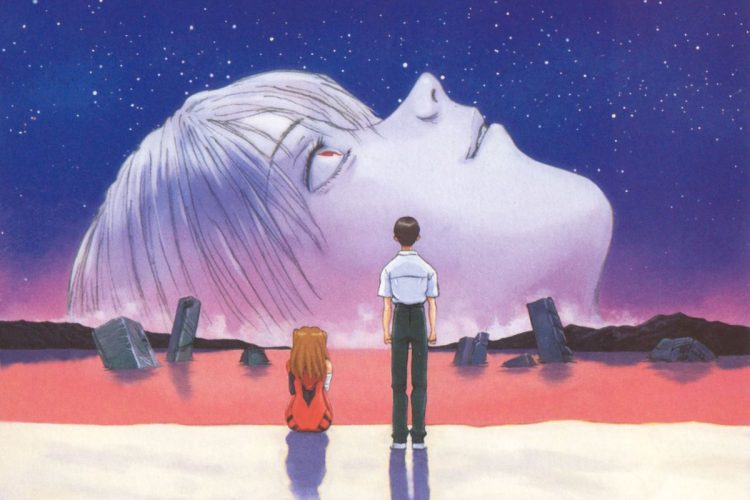 Evangelion: New Theatrical Edition or Rebuild of Evangelion (also known as Evangerion Shin Gekijōban in Japanese) is an anime film series by Studio Khara which is a reboot of a critically-acclaimed and award-winning mecha anime television series called Neon Genesis Evangelion which used to air back in the 1990s. The anime film series is written and directed by Hideaki Anno, who served as the writer and director of the original anime television series.

The first movie in the series, titled Evangelion: 1.0 You Are (Not) Alone, was released on September 1, 2007, and proved to be an immediate hit among fans of the original show and new viewers alike. Subsequently, Studio Khara commissioned a second movie, and Evangelion: 2.0 You Can (Not) Advance premiered a couple of years later on July 27, 2009. The second movie added to the reputation of the hugely popular franchise, and a third movie was commissioned. Three years after the release of the second movie, the third movie, titled Evangelion: 3.0 You Can (Not) Redo, was released on November 17, 2012. Since then, fans of the franchise have been waiting to hear news on a fourth movie, and here’s everything we know about it thus far.

Evangelion 4 Release Date: When will it premiere?

Evangelion 3 released on November 17, 2012. Five years after the release of Evangelion: 3.0 You Can (Not) Redo, Studio Khara, in 2017, announced that a fourth film, titled Evangelion: 3.0+1.0, was in production. ‘Evangelion 3.0 + 1.0’  was previously scheduled to release in Japan on June 27, 2020. Unfortunately, because of the COVID-19 outbreak it has now been delayed. No updates regarding its release date have been made but as soon as we get any confirmed news, we’ll update it here.

"Evangelion: 3.0+1.0" has been postponed. It was originally to premiere in Japanese theaters this June 27, 2020
The new release date of this movie will be released soon. pic.twitter.com/HkCJCKLkh5

The English dub of ‘Neon Genesis Evangelion’ is available on Netflix. When it comes to the three Evangelion movies, as of now, they are not available on any legit streaming platforms.
Read more in anime preview: Knights of Sidonia

The events in the movies take place in an alternate timeline when the world has been devastated by global cataclysmic events known as Impacts.

The events in the first movie take place in the aftermath of the Second Impact, which leaves the entirety of Japan devastated. Only one city, the futuristic city called Tokyo-3, remains in Japan but even its existence comes under threat when giant creatures referred to as Angels descend on the city with the aim to obliterate its human population once and for all. In this backdrop, the movie follows the story of a youngster called Shinji Ikari, who gets summoned to the headquarters of an organization called NERV, which employs giant mechs called Evas to fight the Angels off. At NERV, Shinji is given the responsibility of piloting Eva Unit 01 and has to team up with Eva Unit 00 pilot Rei Ayanami as part of a massive operation against the Angels.

The second movie starts off shortly after the events of the first movie, and Shinji and Rei are joined by two new pilots: the fiery Asuka Langley Soryu and the mysterious Mari Illustrious Makinami. Together, the four pilots lead a brave charge against the monstrous invaders, but when shocking secrets emerge, the four pilots are left wondering whether humanity’s biggest threat are the Angels or humanity itself.

The third movie takes place years after the events of the second movie, when another cataclysmic event – the Third Impact – has rocked Earth. Fourteen years after the Third Impact, Shinji, who was trapped inside Eva Unit 01 in space, is rescued by Asuka and Mari, but when he returns to Earth, he is immediately imprisoned by a military faction called Wille, which is led by his former guardian Misato Katsuragi. Abandoned by his former allies, Shinji rots in prison, but is given a second shot at life when Rei rescues him from Wille and brings him to the NERV headquarters. At the NERV headquarters, Shinji quickly befriends the enigmatic Kaworu Nagisa, who offers him important insights into NERV’s war against the Angels. Before Shinji can absorb the information and plan an operation, he is thrown into a new battle. However, this time, the battle is not against the Angels, but against Shinji’s former comrades in arms.

Over the three movies which have been released thus far, Evangelion has seen dozens of characters take to the screen. There are a handful of characters who have remained central to the movies through out, and below, we’ve provided you with brief backgrounds on each of them.

Shinji Ikari: The main protagonist of the series, Shinji is the pilot of Eva Unit 01. When Shinji was just a toddler, he was abandoned by his father, and grew up as a de facto orphan. Owing to his traumatic childhood, Shinji is shown to be someone who is prone to running away from difficult situations, and he also panics when he has to deal with unexpected situations as a pilot. However, over the course of the movies, Shinji improves considerably. He is shown to have a good rapport with his first partner, Rei, but later, he develops an emotionally charged and sexual relationship with Asuka. Shinji’s turbulent relationship with Asuka proves to be an important driving factor behind the progression of both the characters.

Rei Ayanami: Another major character in the movies, Rei is Shinji’s first partner and is the pilot of Eva Unit 00. Rei’s origin is initially shrouded in mystery and she is shown to be an emotionally withdrawn person who has only one purpose in life – her duty. Later in the story, it is revealed that Rei is actually an Angel called Lilith, and soulless clones of her are hidden away in the deepest levels of NERV to serve as replacements in case she falls in battle.

Asuka Langley Soryu: Although a very important character, Asuka, who is from Germany, is introduced in the second movie and serves as the pilot of Eva Unit 02. Despite being a skilled pilot, Asuka is shown to be poor at interpersonal relationships, but takes a liking to Shinji as she finds similarities between herself and Shinji. Asuka’s coping mechanism is shown to be over-aggressiveness, and this often puts her at odds with other people, including her own comrades.

Mari Illustrious Makinami: Another member of Shinji’s team, Mari is also introduced in the second movie and serves as the pilot of Provisional Eva Unit 05. Mari’s Eva Unit differs significantly from those of her peers, and features four mechanical legs which end in wheels. Further, in lieu of hands, Mari’s Eva Unit has a jousting lance and a claw.